An opt-out  system for organ donation will soon become law after it passed its last hurdle in Parliament.

Adults will be presumed to be organ donors unless they have explicitly objected. Experts say the move will save 700 lives a year.

The House of Lords yesterday gave its approval to the law, now in its final Parliamentary stages after it cleared the Commons last year.

The new legislation is set to be called Max’s and Keira’s Law, after heart transplant patient Max Johnson, 11, and his donor Keira Ball

In 2017, some 411 Britons died before the right donor could be found and more than 5,000 are currently on the waiting list in England alone. Wales introduced an opt-out system in 2015, while the Scottish government has also tabled legislation on the issue.

The new legislation is set to be called Max’s and Keira’s Law, after heart transplant patient Max Johnson, 11, and his donor Keira Ball, who saved his life after dying in a car crash aged nine in 2017.

Peers made no changes to the Organ Donation (Deemed Consent) Bill during its committee stage in the House of Lords.

Speaking during the debate, former Tory health minister Lord O’Shaughnessy said the system of deemed consent would allow Britons to express a preference to not have their organs donated. 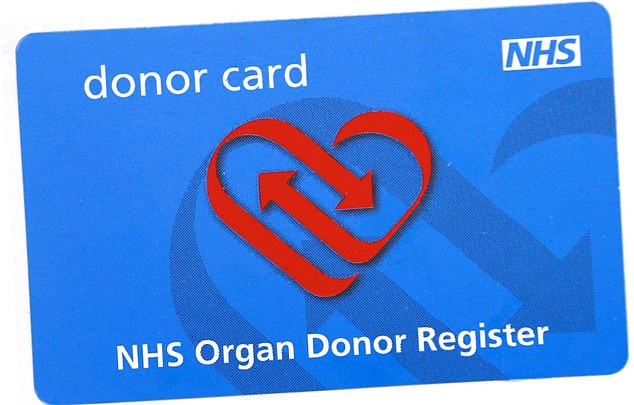 End of an era: Until now, donors would carry this NHS Organ Donor Register card

He said: ‘It must be the case under the system we have now that some people’s organs are being donated because their family agree, even though they would not have agreed, which cannot be right.

‘I used to be a sceptic of opt-out-type systems but I think the proposal that is here in legislation, that has been demonstrated to work in Wales, gets the right balance between giving people that power and control but also making sure they can make a positive choice if they are well informed.’ At any one time there are around 6,000 Britons on the transplant waiting list and three die every day in need of an organ.

Fewer than half of families give consent for their loved one’s organs to be donated if they are unaware of their wishes. Campaigners hope the new system will encourage us to make our wishes known before we die, with an online register for those opting out.

Research has shown more than 80 per cent of adults in England would definitely donate their organs or would consider doing so. However, only 37 per cent of Britons have registered as donors on the NHS Organ Donor Register and received a donor card.

For the Government, Tory frontbencher Baroness Manzoor yesterday told peers: ‘Even if one life is saved as a result of this change in culture… then it must be surely worth it.’

Fiona Loud, of Kidney Care UK, who attended the reading yesterday, said: ‘The new law has the potential to save many lives and is a positive step towards reducing the number of people who die every day waiting for a transplant.’

However, Professor Chris Rudge, a leading transplant surgeon, has said he would opt out on the grounds that the State should not presume to take a citizen’s organs. Last year he said: ‘Organ donation should be a present … I am so horribly opposed to a change in the law.’