All seven British against French European rugby games were scrapped in a blanket decision today, throwing the Champions and Challenge Cups into disarray.

Sportsmail broke the news earlier that all those fixtures were to be called off, and tournament organisers European Professional Club Rugby (EPCR) confirmed the postponements after two meetings on Friday morning with the French clubs.

It comes after the French government this week announced they were closing their UK borders to all but essential travel due to a rise in Omicron Covid variant cases in Britain.

So Bath v La Rochelle, Sale v Clermont, Scarlets v Bordeaux-Begles, Toulouse v Wasps and Stade Francais v Bristol in the Champions Cup will not be played this weekend, nor Worcester v Biarritz and London Irish v Brive in the Challenge Cup. This now means that 10 of the weekend’s 18 European game are off.

Confirming they had postponed, not outright cancelled, the seven matches EPCR optimistically said they hoped to replay them another week.

‘This is a consequence of new travel measures between the UK and France which are being introduced by the French Government,’ their statement read.

‘The board received briefings from the three professional leagues which included updated information from the respective governments, however, there were insufficient assurances that these matches would not be at risk.

‘Therefore, the intention is to reschedule the following Round 2 fixtures to a later date.’

As the games are postponed no points have been officially apportioned yet.

Earlier in the day Racing 92 were awarded a 28-0 forfeit win over the Ospreys, who had positive cases in camp, on Thursday Leinster were forced to take a five-point loss against Montpellier as they had Covid too, and on Wednesday Saracens scrapped their trip to Pau in the Challenge Cup after an outbreak, taking the mandatory loss. 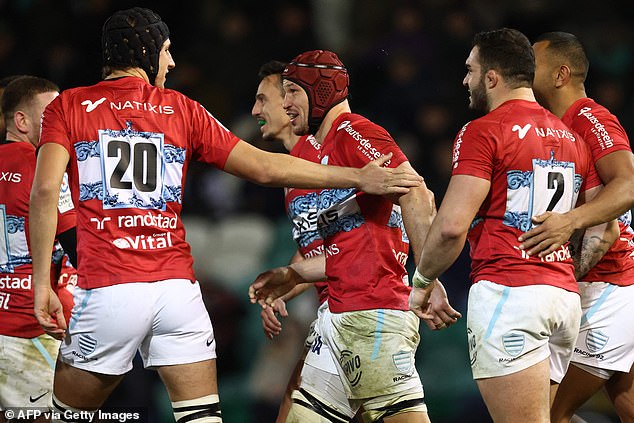 Racing 92 were awarded a 28-0 forefit win over the Ospreys, who had positive cases in camp

Those decisions were made separately to the rest, where clubs were all able to field teams, as French government rules forced EPCR’s hands.

As late as midday on Friday British clubs were being told to proceed with their travel and preparations plans as normal by EPCR – and all announced their teams. But with those playing on Saturday flying today, a quick decision had to be made.

The Challenge Cup game this Friday evening between Dragons and Lyon will go ahead. Lyon arrived in Cardiff this morning, will play tonight and then rush home before the French border closes to UK travellers at midnight.

And Ulster versus Northampton on Friday night, Harlequins against Cardiff, Glasgow against Exeter and Munster versus Castres on Saturday, as well as Leicester versus Connacht on Sunday will be played as they don’t involve cross-border travel between the UK and France.