All hail the new style queen Kate. No more Middleton-of-the-road!

No more Middleton-of-the-road! Kate’s new wardrobe is fun, fashionable and a breath of fresh air

The bow blouse: wittily prissy in a £790 Gucci blouse (which she changed up by wearing it back to front), £130 Jigsaw trousers and £595 Aspinal bag at a London children’s centre in March

This year I experienced a totally unexpected fashion epiphany. It suddenly dawned on me that my new inspiration wasn’t some painfully edgy designer or artfully styled screen star but someone altogether closer to home. Step forward the Duchess of Cambridge, a woman long derided for being too safe, too staid.

Of course, there have always been die-hard Instagram acolytes intent on reproducing her every look. But the Standard Fashion View was that Kate’s outfits were an embarrassment: cautious to the point of naff, favouring rectitude over panache, all ghastly hose and heels.

Think: Jigsaw-obsessed mummy’s-girl bags first big job (which is pretty much what the situation was). The Duchess’s post-nuptial style was safe, staid and stylish only to the most slavish sycophant.

In 2013, Hilary Mantel famously condemned Kate as ‘a jointed doll on which certain rags are hung… a shop-window mannequin, with no personality of her own’. The novelist went on to say that the Duchess ‘appeared to have been designed by a committee… with a perfect plastic smile and the spindles of her limbs hand-turned and gloss-varnished’. Shocking and cruel, yes, but the truth is Mantel was only saying what many had been privately thinking. The Duchess’s clothes wore her, rather than her wearing them. As a royal clothes horse, she could be relied upon for the bare minimum of buying British, while not upsetting the applecart, but one wouldn’t dream of looking to Kate for style inspiration. Hovering uncertainly about the mid-market, her wardrobe was girl next door with an usually large collection of fascinators. Chic she was not. 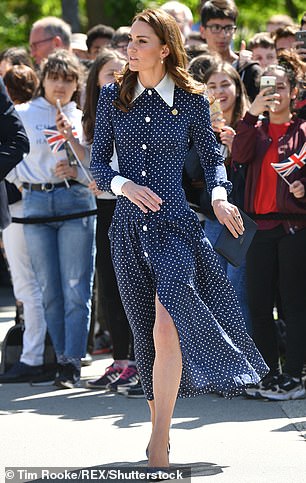 The dotty shirtdress: revisiting a favourite £1,750 Alessandra Rich dress (worn the previous November), here teamed with suede heels, pearl earrings and a Smythson clutch for a May outing to Bletchley Park

Well, no more. During the past few months, the Duchess has seriously upped her fashion game – and what a joy it has been to behold. The first inklings came at the end of last year, when Kate variously sallied forth in Alessandra Rich and LK Bennett polka dots, a festive Emilia Wickstead tartan skirt, a fabulous Oscar de la Renta suit and Chloé combat boots (yes, really!).

This new, more up-and-at-’em attitude coincided with the maternity leave of Kate’s long-term stylist, Natasha ‘Tash’ Archer, the woman the Queen tasked with making her granddaughter-in-law look more regal back in 2014. Throughout, Tash was credited as a PA rather than stylist, a title some catty fashionistas said was far more appropriate. While Tash was away, the Duchess sought advice from her old university friend and former Vogue staffer Virginia ‘Ginnie’ Chadwyck-Healey. Not only did Kate’s look feel new-broomish, Ginnie is adept at putting longer-line frocks centre-stage, while also cracking modish casuals.

Team Tash swiftly made it known that it was business as usual, and that she – rather than Ginnie – was the source of innovation. Either way, there were signs that – after years of twee conservatism – her charge had swapped playing it safe for getting into her stride. To tell a woman that her guise was ‘very Kate Middleton’ was no longer a passive-aggressive insult but, increasingly, a coveted accolade.

A series of ‘wow’ moments followed. In February a periwinkle Mulberry cape coat provoked gasps in Northern Ireland. In March, Kate sported an ultra-fashionable (yet very her) lilac Gucci pussy-bow blouse (which she wore back to front) with wide-legged Jigsaw trousers. Evening-wise, there was not only her beloved McQueen, but more Gucci, Erdem and Missoni. Her Wimbledon game was particularly strong: a Suzannah white button-down, followed by the emerald Dolce & Gabbana couture tea dress first worn on tour in Canada, and which the design duo subsequently named after her. Oh, and her Ascot ensemble: powder-blue lace Elie Saab that other royals visibly swooned over, teamed not with nude courts, but silver stilettoes. Meanwhile, Kate brought us the hatband even before Miuccia Prada.

The constituents of Kate Mark 2 are bold hues, sharp shoes, sleek one-pieces (dresses and coat-dresses) and streamlined suits; a new, more womanly and fashion-forward love of length; a move beyond the mid-market in favour of high-end offset by high-street; a more age-appropriate take on casual; and fun with fashionable flourishes (dots, bows, bands). All this plus what commentators insist on referring to as the Duchess’s tendency to ‘recycle’. In other words, wearing her outfits more than once in the manner of a normal human being. 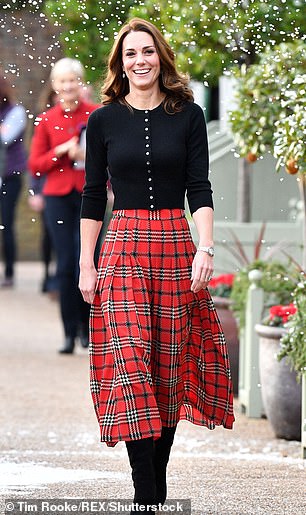 The festive tartan skirt: Christmas party-ready at Kensington Palace last December in a seasonal plaid Emilia Wickstead skirt, £1,300, and a £315 Brora cardigan, amid a flurry of fake snow

It helps that Kate’s style transformation coincides with what is fashionable: modest, wittily prissy, ladylike chic, with a soupçon of retro camp. There are vague shades of Diana, vague shades of Queen Letizia of Spain, but, in the main, this is something entirely Kate’s own.

Many women experience a new-found fashion confidence in their mid- to late-30s, being older, wiser, richer and happier in their bodies. For Kate the benefits are still more obvious. Once the royal ingenue – and middle-class arriviste – she has now been married for eight years. Kate’s not the new girl any more. Instead, there is Meghan, a less protocol-versed incomer, to take the flak. The arrival of a fashion-literate sister-in-law has doubtless also served to raise Kate’s game. The Duchess of Sussex boasts notoriously expensive tastes. In the first eight weeks after her wedding, she wore outfits costing £155,000 (if she’d paid full price) and her wardrobe groans with design houses such as Givenchy and Dior. Meghan’s presence has not only introduced a healthy style rivalry, her exorbitance has sanctioned a greater – and beyond British – spend.

There is finally a sense of pleasure being had here: a woman finding her style, settling into it, then having some fun. Kate knows who she is and what she is here for. Royalty – not least, female royalty – speaks in semaphore; an iconography that we, as the watching public, are invited to read. Kate’s sartorial semaphore is saying, ‘I’m Princess of Wales-ready and, before too long, Queen. I may not have been born to it, but I’ve got this royal thing cracked – and, damn it, I am going to enjoy it.’

Even the most fashion-resistant royal women have their style moments: the Queen Mother with the ‘White Wardrobe’ that wowed Paris in 1938; Princess Anne with her three Vogue covers between 1971 and 1973 (upcoming as an It-girl in the new season of The Crown). This, at long last, is Kate’s. And long may it – and she – reign.

Gone are the too high, too girlish hemlines; in their place more womanly midis and maxis that show off her willowy frame 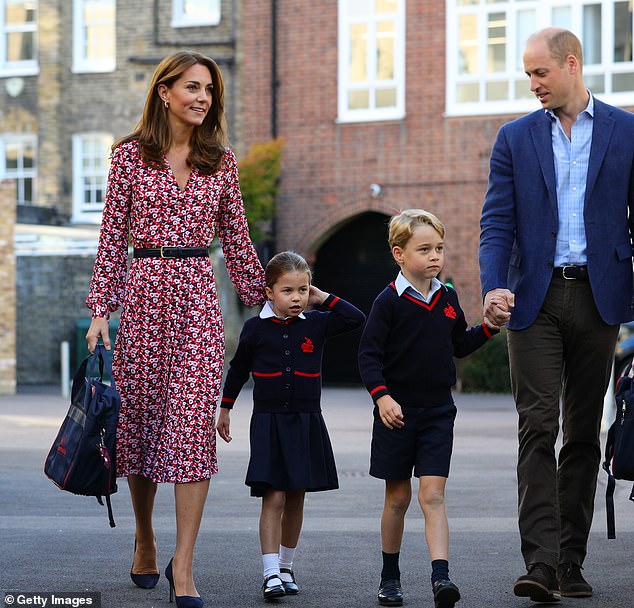 The school-run midi: for a lesson in how to mix femininity and business, look no further than the Duchess. For four-year-old Princess Charlotte’s first day at Thomas’s Battersea school earlier this month, she opted for an ultra-flattering £215 floral Michael by Michael Kors midi and kept the look fresh and modern with pared-back accessories

The fit and flare winner, The fairytale ballgown

The fit and flare winner

As patron of the All England Lawn Tennis and Croquet Club, all eyes are on Kate to serve up some winning looks. No problem. With its strap details and pleats around the bust, her choice of a £1,390 Emilia Wickstead gown, in her beloved powder blue for the men’s final delivered a classic look with a modern edge. The Aldo block-heel shoes were £64.99.

Kate knows the power of a dream dress – and this blush pink floor-sweeping Gucci gown doesn’t disappoint. At this charity gala at London’s V&A in February, the Duchess upped the wow factor with a waist-whittling sash and £1,170 Prada clutch.

Still super-smart but without the try-hard ‘occasion’ look of old, step forward the clever coat-dress

The belted waist and A-line cut of this grey wool Catherine Walker coat-dress make it smart without being frumpy. Kate paired it with black tights and courts and a Sylvia Fletcher for Lock & Co hat on a visit to King’s College London this March.

The queen of green

Brass buttons and a princess-line silhouette give this bespoke Alexander McQueen coat a military feel for her St Patrick’s Day visit to the Irish Guards in London this March. The green tourmaline and amethyst earrings are by Kiki McDonough; the shamrock brooch and corsage nod to the occasion.

Girl-next-door meets Cinderella! Kate wore this £1,735 retro-style caped coat-dress by Mulberry on a walkabout in Northern Ireland in February. Accessorised with loose hair and a big smile, there’s an approachability to the look.

The top tweed, The firm favourite

At the V&A Museum for her first evening event after returning from maternity leave last October, Kate’s new style won big style points. With its raw hems and off-the-shoulder cut, she looked uber-cool in Erdem’s £1,395 modern take on tweed. The Jimmy Choos rocked, too.

At Ascot in June, Kate knocked it out of the park in a tulle-rich, exquisitely embroidered bespoke Elie Saab two-piece. The pussy-bow collar and sheer sleeves gave the chic look standout clout. The Philip Treacy hat, silver heels and clutch were the perfect finishing touches.

Kate is still loyal to the high street – but she’s ditched the prim-and-proper outfits for a relaxed, accessible look

The trusty favourite, The comfy crop

Returning to one of her long-time favourite labels, LK Bennett, Kate wore this polka-dot dress on a visit to the Evelina Children’s Hospital in London last December. The modest cut of the £325 Mortimer is a big trend for autumn.

What to wear when bombing round Chelsea Flower Show with a group of children on a sunny May day? Kate decided on a £255 broderie anglaise blouse by MIH, on-trend £59.95 Massimo Dutti cropped camel trousers and sensible Supergas.

One gown, two ways: what a difference a sleeve makes! For the National Portrait Gallery gala in March (left), Kate transformed the midnight blue floral tiered Alexander McQueen maxi she wore to the 2017 Baftas (right), replacing the original off-the-shoulder straps with sleeves and a more relaxed ‘down-do’

These are the shoe trends that Kate swears by 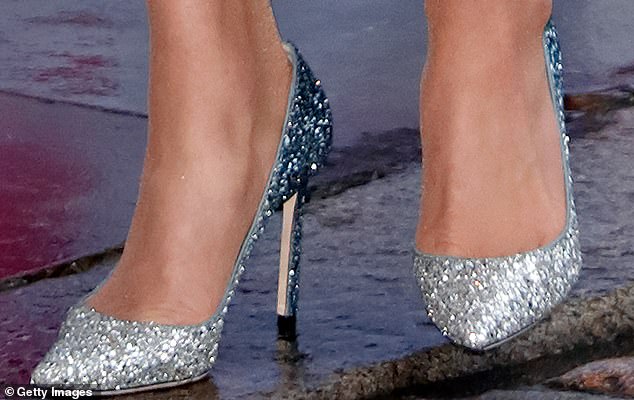 The party heel: glittery £525 Jimmy Choos were just the ticket at London’s Somerset House for a charity do in June

For a smart-casual look, Kate nailed it in these £35 Monsoon wedges for a visit to RHS Wisley earlier this month.

A high-shine take on the classic court, these £545 Gianvito Rossi heels upped the glamour at Ascot in June.

These £215 See by Chloé boots toughened up an off-duty look at a London community garden visit in January.

Elegant but comfortable, Kate kicked off the first day of this year’s Wimbledon in these £495 Gianvito Rossi courts.

These £495 Rupert Sanderson heels are ideal for formal events. Kate wore them in January at London’s Royal Opera House.

The hatband is a hot trend – but Kate got there first

The top plait: for the christening of Harry and Meghan’s son Archie in July, Kate may have looked pretty in pink Stella McCartney, but her bespoke plaited berry hatband by Juliette Botterill Millinery was the crowning glory 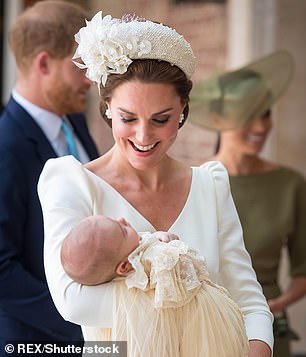 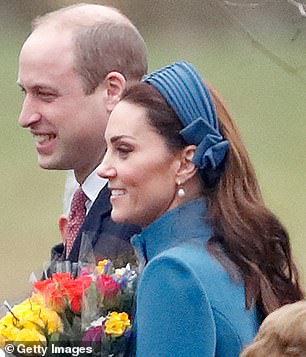 The summer bloom, The retro band

With its striking appliqué flowers, this £958 Jane Taylor design almost upstaged Prince Louis at his christening in July.

For Sandringham’s Epiphany Service in January, Kate wore another Jane Taylor design – a £575 crepe band in the same shade as her Catherine Walker coat.