The dust that coats much of the surface of Mars comes largely from a single thousand-kilometer-long geological formation near the Red Planet’s equator, scientists have found.

It comes as Mars is in the grip of a gigantic dust storm engulfing almost the entire planet.

In the film The Martian, a dust storm leads to a series of events that strands an astronaut played by actor Matt Damon. The dust that coats much of the surface of Mars comes largely from a single thousand-kilometer-long geological formation near the Red Planet’s equator, scientists have found.

THE BIGGEST VOLCANIC DEPOSIT IN THE UNIVERSE

Once 50 percent of the continental United States in size, the wind has eroded the area , leaving behind an area that’s now more like about 20 percent.

Yet it is the largest known volcanic deposit in our solar system.

Wind-carved ridges known as yardangs are the remnants of erosion.

By calculating how much of the MFF has been lost over the past 3 billion years, the scientists could approximate the current quantity of dust on Mars, enough to form a 2 to 12 meters thick global layer.

The study published in the journal Nature Communications found a chemical match between dust in the Martian atmosphere and the surface feature.

‘Mars wouldn’t be nearly this dusty if it wasn’t for this one enormous deposit that is gradually eroding over time and polluting the planet, essentially,’ said co-author Kevin Lewis, an assistant professor of Earth and planetary science at the Johns Hopkins University.

The team were able to pinpoint the region as having an abundance of sulfur and chlorine, as well as a match to the ratio of sulfur to chlorine in Mars dust.

Earlier findings suggest that the MFF had a volcanic origin.

Once 50 percent of the continental United States in size, the wind has eroded it, leaving behind an area that’s now more like about 20 percent.

Yet it is the largest known volcanic deposit in our solar system.

Wind-carved ridges known as yardangs are the remnants of erosion.

By calculating how much of the MFF has been lost over the past 3 billion years, the scientists could approximate the current quantity of dust on Mars, enough to form a 2 to 12 meters thick global layer.

Dust on Mars has caused severe problems for real missions, including the Spirit Mars exploration rover.

The fine, powdery stuff can get into expensive instruments and obscure solar panels needed to power equipment.

On Earth, dust is separated from soft rock formations by forces of nature including wind, water, glaciers, volcanoes and meteor impacts. 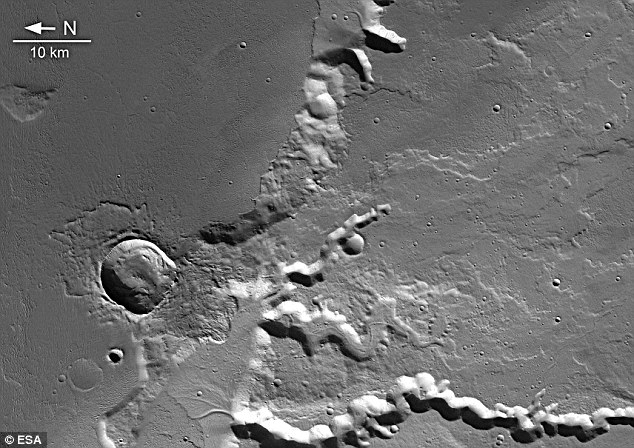 These images, taken by the High Resolution Stereo Camera (HRSC) on board ESA’s Mars Express spacecraft, show part of the Medusa Fossae formation and adjacent areas at the highland-lowland boundary on Mars.

For more than 4 billion years, however, streams of water and moving glaciers have likely made but a small contribution to the global dust reservoir on Mars.

While meteor craters are a common feature on the fourth planet from the sun, the fragments created by the impacts typically are bigger than the fine particles that comprise Martian dust.

‘How does Mars make so much dust, because none of these processes are active on Mars?’ said lead author Lujendra Ojha, a postdoctoral fellow in Lewis’ lab.

Although these factors may have played a role in the past, something else is to blame for the large swathes of dust surrounding Mars now, he said.

Ojha and the science team looked at the dust’s chemical composition.

Landers and rovers far apart on the planet have all reported surprisingly similar data about the dust.

‘Dust everywhere on the planet is enriched in sulfur and chlorine and it has this very distinct sulfur-to-chlorine ratio,’ Ojha said.

HOW BIG ARE THE DUST STORMS ON MARS?

Staggering new Nasa footage has revealed the planet-wide transformation occurring on Mars, as a dust storm continues to ravage the surface of the entire planet.

The stunning images comes courtesy of the Mars Color Imager instrument strapped to the Mars Reconnaissance Orbiter, which maps the entire planet each day.

Dust storms that circle the entire planet appear on Mars every six to eight Earth years, which equates to three to four years on the red planet.

Astronomers still don’t understand why or how these storms form and evolve. They hope to learn more about the phenomenon by studying the current conditions.

Amateur skygazers back here on Earth are able to witness the effect the storm is having on the red planet, armed with relatively inexpensive hobbyist telescopes.

Speaking to MailOnline, Dr Robert Massey, deputy executive director of the Royal Astronomical Society, said: ‘The storm is visible from Earth, in that they grow quickly, often envelop much of the planet and block out surface detail.

‘You might still see the highest volcanoes, like Olympus Mons, poking through it as well as the polar ice caps, but the usual dark features on the surface can be completely invisible.

‘With a decent telescope, observers can see the polar caps growing and shrinking in the dust storms.

They also studied data captured by the spacecraft Mars Odyssey, which has orbited the planet since 2001.

Ojha and his colleagues were able to pinpoint the MFF region as having an abundance of sulfur and chlorine, as well as a match to the ratio of sulfur to chlorine in Mars dust.

Dust particles can also affect Martian climate by absorbing solar radiation, resulting in lower temperatures at the ground level and higher ones in the atmosphere.

This temperature contrast can create stronger winds, leading to more dust being lifted from the surface.

While seasonal dust storms happen every Martian year (twice as long as an Earth year), global dust storms can form, happening about every 10 or so years.

‘It just explains, potentially, one big piece of how Mars got to its current state,’ said Lewis.

‘Right now is a good time to look at Mars as it’s near opposition, the point when the planet is opposite the Sun in the sky and near its minimum distance from the Earth.

‘Opposition is on July 27, and its closest approach is on 30 July.’

Dr Michelle Collins from the University of Surrey added: ‘Amateur telescopes are able to image the Martian atmosphere, and some keen observers have already taken some wonderful photos of this global dust storm.

‘For example, one image taken from Costa Rica with an eight-inch Meade telescope.

‘The storm now obscures much of the surface of Mars, leaving observers with a more uniform red planet than they would have seen before.

‘Looking at pictures taken before and after the dust storm, the changes are quite remarkable.’ 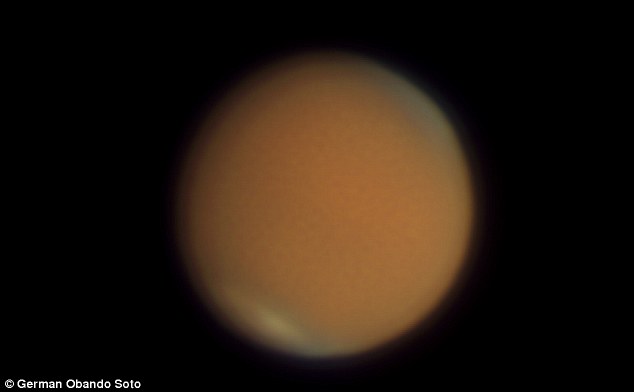 Amateur skygazers back here on Earth are able to witness the effect the storm is having on the red planet, armed with relatively inexpensive hobbyist telescopes. This image of the dust storm was taken in Coronado, Costa Rica, using a Cassegrain 8 inch Meade telescope 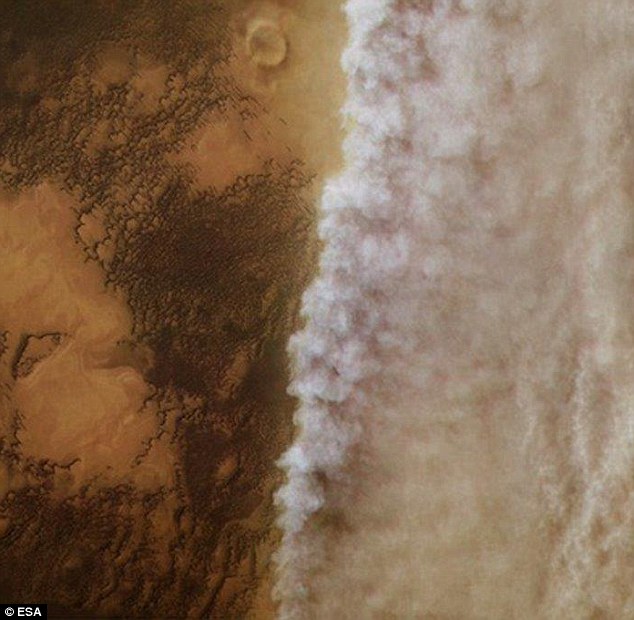 Scientists from Nasa first observed a smaller-scale dust storm on May 30, but by June 20, it had gone global. The high resolution stereo camera on board ESA’s Mars Express captured this impressive upwelling front of dust clouds,  visible in the right half of the frame

Scientists from Nasa first observed a smaller-scale dust storm on May 30, but by June 20, the storm had gone global.

For the Opportunity rover on the surface of the planet, that meant a sudden drop in visibility from a clear, sunny day to that of an overcast one.

Because Opportunity runs on solar energy, scientists had to suspend science activities to preserve its batteries.

As of July 18, no response has been received from the vehicle.

Luckily, all that dust acts as an atmospheric insulator, keeping nighttime temperatures from dropping below what Opportunity can handle.

However, the nearly 15-year-old rover isn’t anywhere near out of the woods yet, as it could take weeks – or even months – for the dust to start settling.

Based on the longevity of a 2001 global storm, Nasa estimates it may be September before the haze has cleared enough for Opportunity to power up and call home.

‘This is one of the largest weather events that we’ve seen on Mars,’ since spacecraft observations began in the 1960s, said Michael Smith, a scientist at Nasa’s Goddard Spaceflight Center in Greenbelt, Maryland.

‘Having another example of a dust storm really helps us to understand what’s going on.’

When the skies begin to clear, Opportunity’s solar panels may be covered by a fine film of dust.

That could delay a recovery of the rover as it gathers energy to recharge its batteries. A gust of wind would help, but isn’t a requirement for a full recovery.

While the Opportunity team waits in earnest to hear from the rover, scientists on other Mars missions have gotten a rare chance to study this head-scratching phenomenon.

The Mars Reconnaissance Orbiter, Mars Odyssey, and Mars Atmosphere and Volatile Evolution (MAVEN) orbiters are all tailoring their observations of the Red Planet to study this global storm and learn more about Mars’ weather patterns.

Meanwhile, the Curiosity rover is studying the dust storm from the Martian surface.

With the Thermal Emission Imaging System (Themis) instrument, scientists can track Mars’s surface temperature, atmospheric temperature, and the amount of dust in the atmosphere.

This allows them to watch the dust storm grow, evolve, and dissipate over time.

Since the dust storm began, the Themis team has increased the frequency of global atmospheric observations from every 10 days to twice per week.