All the fun of the fair: A family-friendly road trip across Europe

All the fun of the fair: Discovering a road trip across Europe with kids can be stress-free… when you let them run away to the circus

By Joanna Tweedy For Mail On Sunday

Our kids have run away to the circus. And it isn’t just ours either. Everywhere we look, les enfants are flying through the air, dancing across tight-ropes or hurtling down zip-wires. The pluckiest sit inside giant inflatables and whistle down a ski slope.

A funfair pops up every summer in La Clusaz, a pretty French ski town in the Haute-Savoie region, just an hour’s drive from Geneva airport.

Glinting above us is the summer luge, a silver snake that slithers down one of the mighty grass-covered peaks. The half-mile two-lane slide for grown-ups and children is possibly the best fun you can have for £3.50 anywhere in Europe.

En famille, we boarded cable cars that take riders to the slide’s starting point and duly sat in the metal carts, which come with a joystick brake.

My partner Laura and I pelted down with our children – Belle, six, and Cleo, three – leaving them wild-eyed with excitement, and awaited the rest of our clan at the bottom. Dad, nudging 70, was slower than treacle in his descent, while my 19-year-old niece had to be rescued after dropping her phone as she attempted to live-stream the fun on social media.

Our mountain base was the village of Le Chinaillon. This place may be small but it’s surprisingly self-sufficient, boasting a string of good fondue restaurants, sports shops, a supermarket, spa and even a cute cinema showing subtitled films. 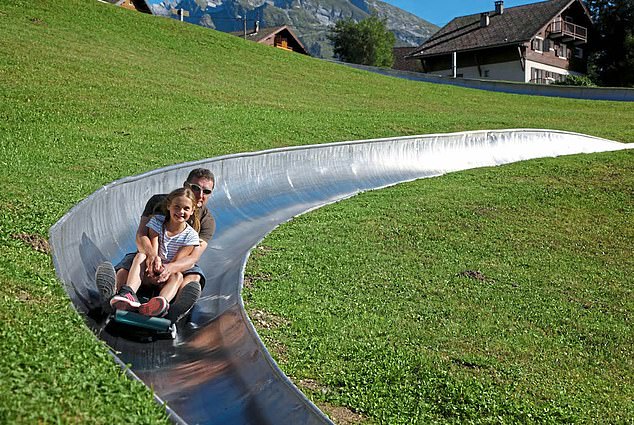 We stayed at the luxurious Le Roc du Tours complex, a mega-chalet that is split into 44 apartments and comes with a fitness suite, spa and pool.

Summer road trips across Europe with kids are much less nerve-shredding these days – an iPad proved invaluable on our seven-hour drive from Calais. And at £100 for a return crossing with P&O plus £200 on fuel, it’s easier on the wallet than flying.

Before our journey home, we spent a perfect day on an emerald lake in the nearby village of Flumet. And the piece de resistance? A walk that served up a final souvenir – a glorious glimpse of Mont Blanc.