Former Liberal staffer Brittany Higgins has been hospitalised to protect her welfare.

Her boyfriend David Sharaz told Guardian Australia she was recovering after being admitted on Thursday night over concerns for her well-being.

He said she was ‘receiving the support she needs after months of sustained political pressure’.

Ms Higgins shocked the nation earlier this year when she alleged she was raped by a colleague in a minister’s office in Parliament House after a boozy night out in March 2019.

She made a complaint to police in February and officers have almost concluded their investigation, meaning a decision whether or not to charge her alleged rapist is imminent.

Ms Higgins’ hospitalisation comes a week after a report found Scott Morrison’s advisers did not spread smears about her boyfriend – a former civil servant – to journalists in a practice known as ‘backgrounding’.

Mr Sharaz believes the prime minister’s spin doctors told journalists that he had a grudge against the government which could explain Ms Higgins’ decision to allege she was raped.

Mr Morrison tabled the findings of the ‘backgrounding’ investigation by his chief of staff John Kunkel in parliament last week.

Earlier that week Labor had named members of the prime minister’s staff accused of ‘back-grounding’ journalists about Mr Sharaz during a feisty Senate estimates hearing.

The four-page report by Mr Morrison’s chief of staff John Kunkel found only ‘hearsay’ to back up the claims of ‘backgrounding’.

‘I do not make a finding that negative briefing against Mr Sharaz of the sort alleged has taken place,’ he wrote.

‘My conclusion, based on the evidence presented to me, should in no way be taken as a reflection upon the honesty or sincerity of Ms Higgins.’

Labor’s Katy Gallagher had said one journalist who came forward and forced the hand of the prime minister to launch the investigation had since withdrawn their evidence.

She questioned why Dr Kunkel would ask the victim of an alleged rape at Parliament House in March 2019 to now demonstrate that the backgrounding occurred.

‘This looks like an attempt to push back on Ms Higgins very strongly and it seems extremely unfair to me,’ Senator Gallagher said. 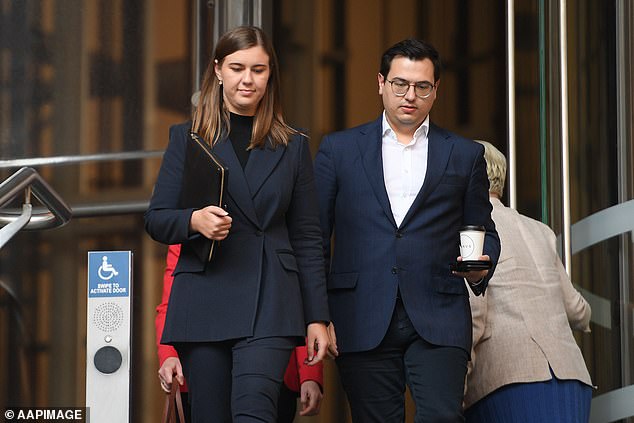