A huge alligator nicknamed Marty has scared the living daylights out of a horse at an American racetrack that’s been home to the huge predators for years.

Several races at the Delta Downs racetrack in south-west Louisiana have had to be delayed due to spontaneous alligator appearances over the years.

On Friday, Marty made his way out of the lake in the track’s infield and onto the dirt course, giving a horse a bad fright during a nine-race meeting.

Marty the alligator makes his way out onto the Delta Downs racecourse, spooking a horse during Friday’s race meet

Joe Allen posted the video on Facebook with the caption ‘It’s Marty’s world, we just live in it,’ and racing fans were quick to joke about the cameo in light of the numerous gator sightings at the track.

‘If you’re at Delta Downs, then it’s a regular occurrence lol,’ a fan tweeted.

‘I’ve been telling everyone for years about over watering and it’s consequences,’ another wrote. 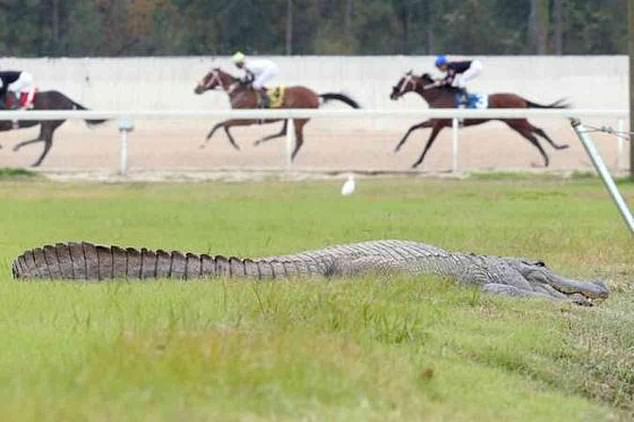 Locals say three alligators reside in the lake located in the infield at the Delta Downs racecourse, with the first sighting back in 2010

Locals say the track is home to three alligators, with the first sightings dating back to 2010.

Louisiana is home to around two million alligators, and once had the country’s largest specimen, a 5.84-metre monster that was killed in 1980.

It is believed the gators love the environment of the track due to the grubs around the dams on the course.

While the gators have made cameos on the track, officials have managed to keep the reptiles from eating any horseflesh.

American alligators have also appeared on the PGA tour, at times jump scaring golfers, while more daring players have interacted with the creatures.

In 2017 former PGA golfer Smylie Kaufman jumped with fright when he spotted an alligator in his path on the fairway at the Arnold Palmer Invitational in Texas.

Just last month Englishman Callum Tarren got a huge shock when he saw a gator just feet from where he was standing at the Zurich Classic in New Orleans.

But Cody Gribble put them both to shame at the 2017 Arnold Palmer Invitational in Florida, slapping an alligator on the tail as it lay on the course near a water hazard.