This is the scary moment a huge alligator makes its way across a road following Hurricane Irma after Floridians were told to be aware of the beasts.

The adult-sized animal was filmed in downtown Melbourne, Florida, climbing up a pavement and scurrying into the grass hours after the huge storm battered the US state.

The film was shot by the Melbourne Fire Department, and now the Florida Department of Health tweeting to urge residents to ‘be alert to wildlife’ because ‘snakes, alligators, etc. may have been displaced as a result of strong winds or rain’.

A person in the video can be heard saying ‘there he goes, I’m outta here’ as the reptile slithers into the grass out of the camera shot.

A staggering 1.3 million alligators live in Florida, with many parts of the Sunshine State battered with winds up to 130 mph and some areas battered with 20 inches of rain during the course of the weekend, its feared animals may have been washed further inland.

Hurricane Irma had been downgraded to a tropical storm on Monday but now officials claim that the risk of flooding and the alligators which have been dragged with it still remain in place.

The adult-sized animal was filmed in downtown Melbourne, Florida, climbing onto a pavement after Hurricane Irma had battered the US state

The reptiles are known to cope with extreme weather by taking refuge in safe spaces such as driveways and even houses.

People on social media have been quick to share their experiences of alligators since Hurricane Irma smashed the US.

One Twitter user posted: ‘Finally we’ve got an update from my family and turns out they have an alligator in their pool.’

Another person posted a video of an alligator braving the adverse weather conditions in Viera, Florida. 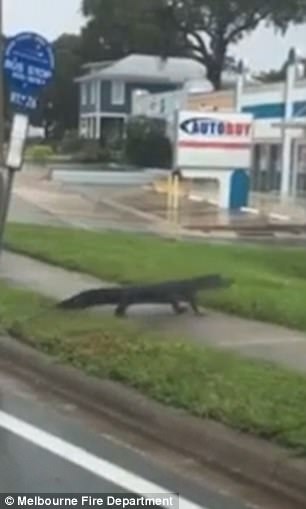 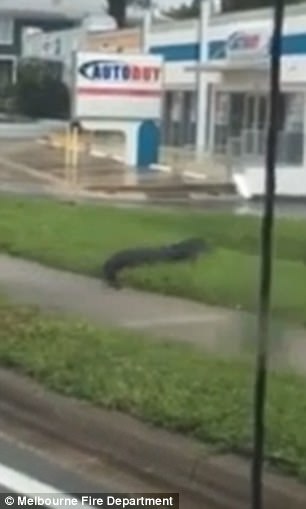