An ally of Jeremy Corbyn has been caught apparently downplaying the anti-Semitic abuse suffered by Luciana Berger and other female MPs.

Naomi Wimborne-Idrissi, a founding member of fringe group Jewish Voice For Labour, was recorded saying there was ‘no proof anybody in the Labour Party is going to punch them in the face’.

She was speaking a day after Miss Berger and fellow Labour MP Ruth Smeeth gave heartbreaking descriptions of the vile abuse they have received on social media in a Commons debate.

They electrified the chamber with examples of how Corbyn supporters had called them ‘traitor’, ‘Judas’, an ‘absolute parasite’ and told them to ‘get out of this country’.

One message to Miss Smeeth read: ‘Hang yourself you vile treacherous Zionist Tory filth, you’re a cancer of humanity.’

In the emotionally-charged debate on anti-Semitism, which proved a devastating day for Mr Corbyn, MPs on all sides broke with convention to give the two MPs standing ovations, and some MPs were reduced to tears by their harrowing stories.

Yet the next day, the abuse was seemingly downplayed by Miss Wimborne-Idrissi, who told a meeting of Labour Party members and councillors in Manchester: ‘As much as I disagree with Luciana Berger and some of the other women MPs in the Labour Party, I do not want to see them subjected to thousands of abusive tweets.

‘But those abusive tweets are not proof that anybody in the Labour Party is going to go and punch them in the face, or treat them in any way that we wouldn’t expect to be comradely behaviour within the party.

‘Different levels of (abuse) have been deliberately confused – a thousand allegations of people saying things on Twitter…[but] I don’t know of one example of a Jewish person actually being abused in a Labour Party context face-to-face.’ Jewish Voice for Labour was set up last year by activists including Miss Wimborne-Idrissi, who has accused Israel of ‘exploiting’ the Holocaust to ‘commit crimes against humanity’.

Discussing Mr Corbyn’s ally Ken Livingstone, who has been suspended for claiming Hitler was a Zionist, Miss Wimborne-Idrissi told the audience: ‘This is one of those areas where you are not allowed to speak. 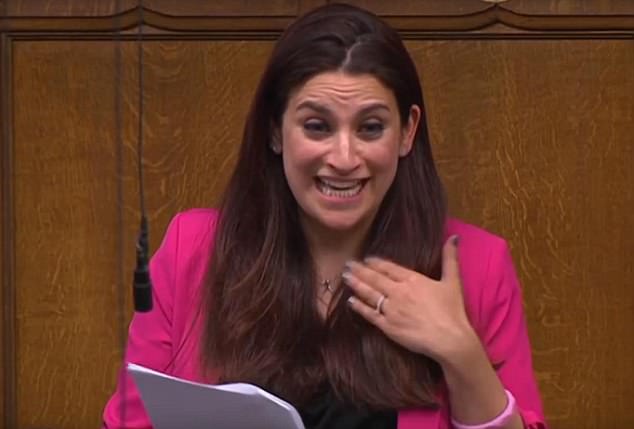 ‘Basically, what Ken has been done for is not actually anti-Semitism because that could not be proved. They had no evidence that anything he said was evidence of hostility to Jewish people as Jews. Despite what you read in the Press that’s not what he’s suspended for.

‘He’s suspended because he’s offended Jewish people who take exception to the way he referred to the Holocaust, to Nazis. Really it’s a question of what do we mean by offence in political discourse?’

Yesterday the Labour Party pointed to a tweet Mr Corbyn had sent following the Commons debate which said: ‘I pay tribute to MPs who spoke in yesterday’s anti-Semitism debate, whose harrowing experiences remind us of the urgent need to eradicate anti-Semitism from politics and society.’

Last night Labour MP Wes Streeting said: ‘People like Naomi Wimborne-Idrissi are part of the problem. By dismissing or denying the problem, they facilitate and enable it.

‘How on earth she could be so heartless after the powerful testimony we heard this week is a question that only Naomi can answer.’

Last night John Mann MP said: ‘My anger is nothing like that of my family. What kind of twisted mind does she have to question the veracity of this vile hatred. How dare she.’

Miss Wimborne-Idrissi could not be reached for comment last night.