If you make it to adulthood without having food allergies you might assume you are in the clear, but new research proves this is not the case.

A report from the American College of Allergy, Asthma and Immunology has found that 45 percent of people experience the onset of at least one food allergy after the age of 17.

In fact more than 35 percent of allergies to many types of seafood – including shrimp, crab and lobster – do not appear until after age 17.

The report serves as a warning that just because you age you are not free from developing new allergies.

The researchers said as of 2011 eight percent of US children reported having a food allergy. Forty percent of them had experienced a severe reaction and 30 percent were allergic to multiple foods.

The report noted that the prevalence of tree nut and sesame allergies among children is on the rise, and a separate study published today has found that childhood peanut allergies have become 20 percent more prevalent in the last seven years.

‘Very little remains known about the relative prevalence of childhood vs. adult-onset food allergies and their associated risk factors,’ the report said. 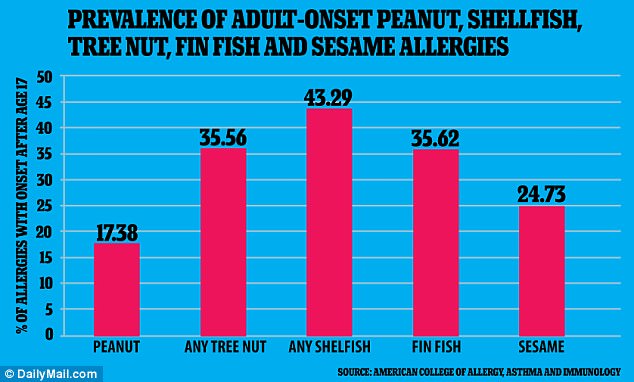 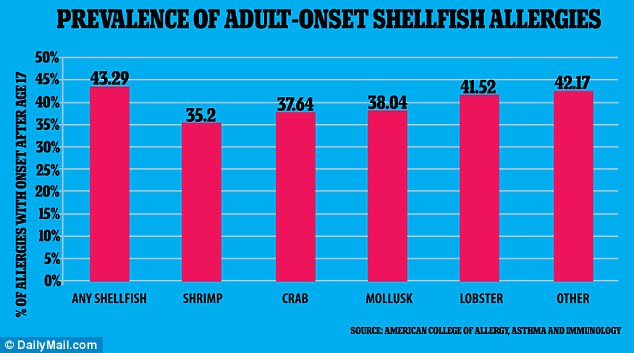 PEANUT ALLERGIES ARE ON THE RISE IN THE US

About two million children suffer from peanut allergies, and black children are more likely than white children to have the allergy.

Experts are unsure why the rate of peanut allergies in the US has jumped an alarming 20 percent in seven years.

Children with a food allergy are up to four times as likely to suffer from other, related conditions, and among these is asthma.

The CDC has said that the following foods account for 90 percent of all allergies:

They found that 3.69 percent of adults have a shellfish allergy, 2.66 percent are allergic to peanuts, 1.8 percent to tree nuts, 1.11 percent to fin fish and .3 percent to sesame.

The report also said that black, Asian and Hispanic adults are more likely than white adults to develop peanut and shellfish allergies.

Study lead author Dr Ruchi Gupta said: ‘Food allergies are often seen as a condition that begins in childhood, so the idea that 45 percent of adults with food allergies develop them in adulthood is surprising.’

Dr Gupta added: ‘We also say that, as with children, the incidence of food allergies in adults is rising across all ethnic groups.’

Another author Christopher Warren said: ‘Because many adults believe food allergies mostly affect children, they may not think to get tested.

‘It is important to see an allergist for testing and diagnosis if you are having a reaction to a food and suspect a food allergy.’