The obese 48-year-old would get through up to eight sugary drinks a day, which made up a staggering 42 per cent of his daily calorie intake.

After trying to give up his fizzy drink addiction several times, doctors prescribed him the altitude-sickness drug acetazolamide.

The unnamed man, from New York, cut the drinks out of his diet when the drug caused them to lose their effervescent taste.

This helped him consume up to 1,104 fewer calories a day and meant he lost weight without making any other changes to his lifestyle.

The man complained to doctors at New York University School of Medicine that he was struggling to lose weight despite exercising and making several attempts to diet.

Although otherwise healthy, he would get through between six and eight non-diet sodas a day, which he often ate with snacks like crisps and biscuits.

He tried, unsuccessfully, to cut fizzy drinks out of his diet numerous times.

Doctors therefore prescribed him a daily dose of 125mg of acetazolamide.

The altitude sickness drug acetazolamide has been shown to eliminate the fizzy taste of sodas.

It does this by inhibiting the activity of the protein carbonic anhydrase.

And carbonic acid is what is used in sodas and soft drinks to give them their fizzy taste.

Experts hope acetazolamide may help tackle the obesity crisis, which many blame on people overindulging in sugary sodas.

Acetazolamide inhibits carbonic anhydrase, which is the protein that turns carbon dioxide and water into carbonic acid.

Carbonic acid is used in sodas and soft drinks to give them a fizzy taste.

This caused the man to taste sodas as being flat, without affecting his taste for other food or drinks.

Although he no longer enjoyed the taste, he still craved sodas and indulged in one or two a week.

But eliminating them from his day-to-day diet also drastically reduced the man’s snacking habit.

A decreased appetite is a known side effect of acetazolamide.

He also experienced no side effects, which is thought to be because of him taking a lower dose than the 250mg that is typically prescribed for altitude sickness.

The case was reported in the journal Oxford Medical Case Reports.

Acetazolamide has been liked to depression, headache, anaphylaxis, fever, and pins and needles. 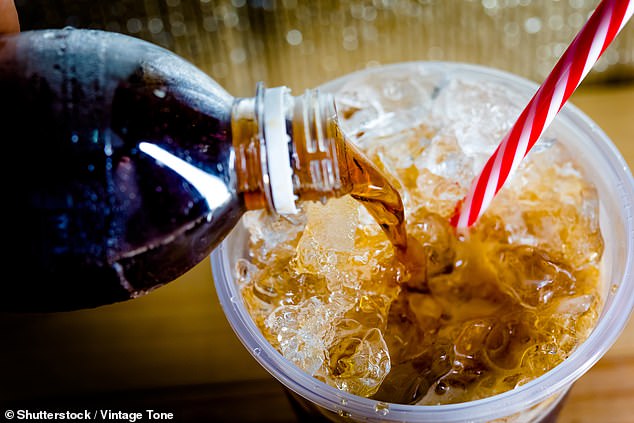 Overindulging in fizzy drinks has been blamed as a key driver in the obesity epidemic.

The consumption of carbonated, sugary drinks has more than doubled over the past four decades, which has coincided with the rise in obesity.

Simply carbonating drinks is thought to make them taste sweeter, which then encourages sugar-seeking behaviours.

Carbonation is also thought to alter the system that helps the body maintain a healthy weight, which can then contribute towards obesity.

Although only one case has been reported, the researchers believe acetazolamide may help combat obesity by reducing soda consumption.

They were particularly encouraged by the efficacy of acetazolamide at 125mg, but add further dose adjustments may be necessary for people with kidneys problems who struggle to clear the drug.