By Sarah Welsh For The Daily Mail

TravelMail’s Sarah Welsh checked into the CBeebies Land Hotel with her daughter Imogen and son, Rory

Thank heavens for the CBeebies channel – that salvation for parents of pre-schoolers, beaming programmes into living rooms the length and breadth of the country 13 hours a day.

And now, courtesy of Alton Towers, you and your wee ones can live their dreams at a sleepover with many of their favourite small screen characters, from Octonauts’ Captain Barnacles to In The Night Garden’s Igglepiggle.

Our, frankly massive, ‘Something Special’ suite was decked out in shades of mustard, green and blue; a parade of cartoon-like shop fronts complete with interactive features lined reception, and the cheerily named ‘musical meadow’ – an area next to the dining room – provided hours of daily entertainment.

For us, there was an extra incentive to visit with our children Imogen, six, and three-year-old Rory.

Last summer Rory was diagnosed with autism, and CBeebies Land Hotel has been partly designed to appeal to families of children with additional needs.

Many of the staff are Makaton trained, meaning they can communicate with children with special needs. 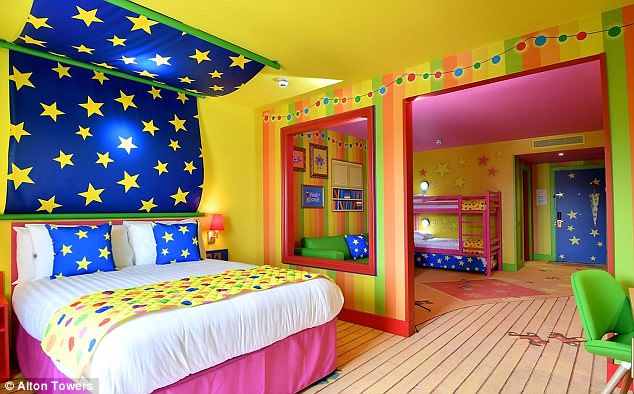 Wake-up call: Sarah’s Something Special suite was decked out in shades of mustard and green 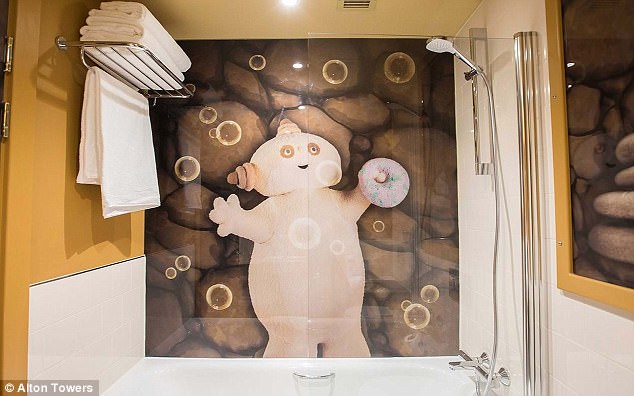 Scrubbing up well: Even the bathrooms at the CBeebies hotel are geared towards children

Some meal options at the hotel’s Windmill Restaurant include ten hidden vegetables – perfect for those with sensory eating issues – and there are clever built-in features such as being able to turn off bright lights and music in the lifts.

We were aware of several other families with children with special needs staying over the same weekend and Claire, our server at breakfast, happily shared stories with us about her own autistic little one.

The whole experience was refreshing, and we found our children’s enthusiasm for the hotel infectious. 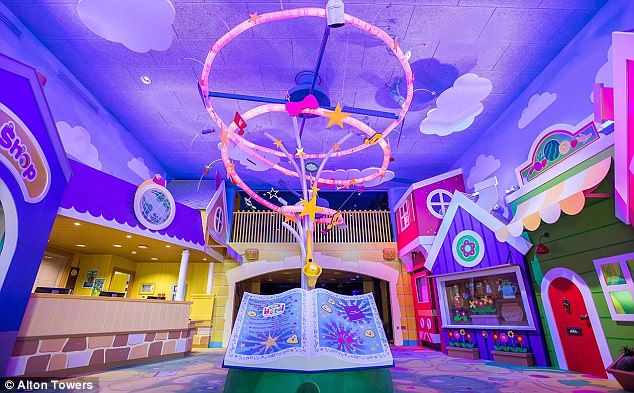 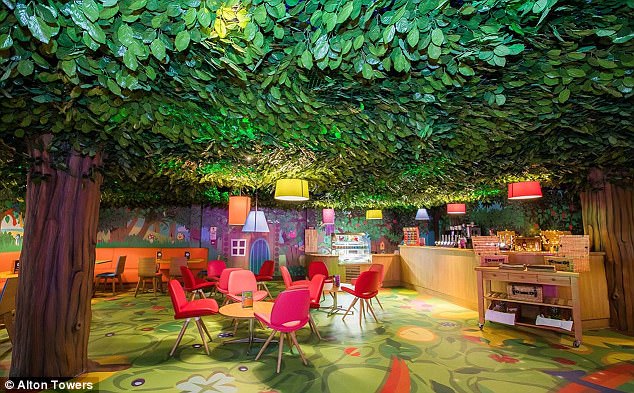 Woodland wonder: One of the spaces at the CBeebies hotel has a ceiling carpeted with leaves

They can certainly be relied upon to say the funniest things.

Take the little boy waiting in line with Imogen to greet Postman Pat before breakfast.

‘Where is he?’ one of the children asked as the assembled crowd fidgeted in their impatience to greet Greendale’s most famous resident.

Theme park entrance from £27.50pp in advance, under 3s free.

A second day at the theme park is free for hotel guests, with access granted one hour before the public.