Alyssa Milano has revealed she was sexually assaulted 30 years ago but never reported the incident to authorities or told her parents because ‘justice was never an option.’

The star and activist spoke of her harrowing ordeal using the #whyididntreport hashtag which surfaced over the weekend in the wake of sexual assault allegations made against Supreme Court nominee Brett Kavanaugh.

The Charmed actress, 45, claimed she never told anyone about the assault which happened 30 years ago and wanted to forget her attacker’s existence.

‘It took me years after my assault to voice the experience to my closest friends,’ Milano wrote in a first-person piece for Vox. 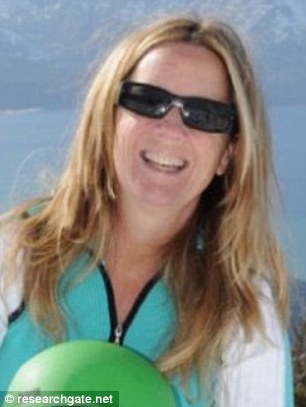 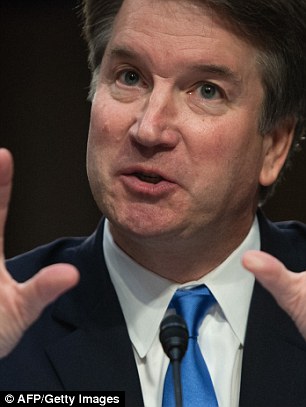 ‘It took me three decades to tell my parents that the assault had even happened. I never filed a police report.

‘I never told officials. I never tried to find justice for my pain because justice was never an option.

‘For me, speaking up meant reliving one of the worst moments of my life. It meant recognizing my attacker’s existence when I wanted nothing more than to forget that he was allowed to walk on this Earth at all,’ she wrote.

Ford said a drunken Kavanaugh attempted to force himself on her when they were teenagers in Maryland in the 1980s – allegations that Kavanaugh has denied.

After days of negotiations, she agreed to testify before the Senate Judiciary Committee this week, as has Kavanaugh.

On Friday President Trump questioned the validity of her allegations in a tweet, saying that ‘if the attack on Dr. Ford was as bad as she says, charges would have been immediately filed with local Law Enforcement Authorities by either her or her loving parents’. 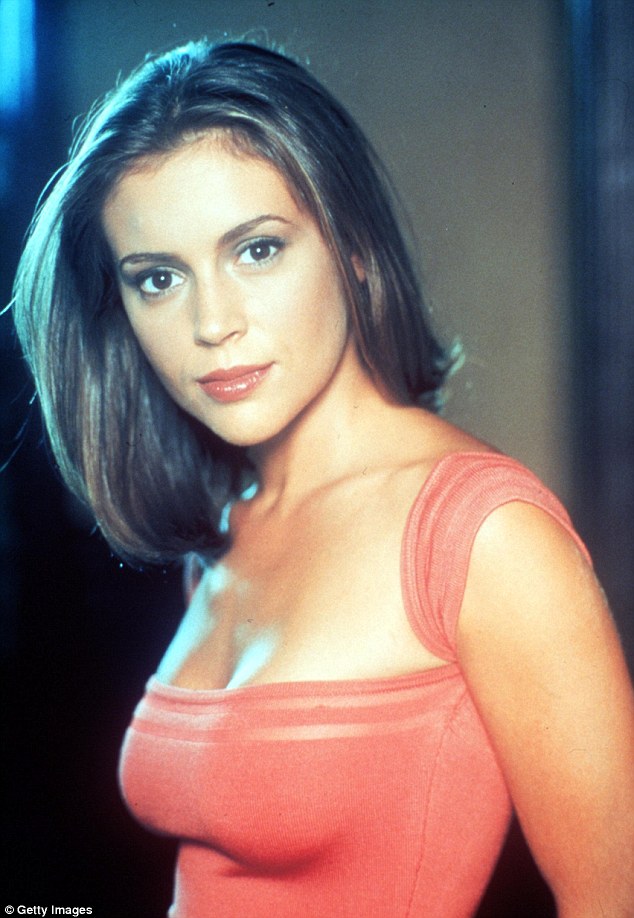 Since then, victims of assault have come forward under the #WhyIDidntReport hashtag to explain why they didn’t speak up about their assaults earlier.

Their stories variously told of their fear of being dismissed, fear of repercussions, self-blame or a desire to forget and move on.

Milano said that Trump’s statement ‘chilled me to my core’.

She said: ‘Far too many of us know that what President Trump said is simply not true,” she wrote.

‘Victims of sexual assault often don’t report what happened because they know all too well that our stories are rarely taken seriously or believed — and that when it comes to sexual misconduct, our justice system is broken’.

Milano, who appeared on Who’s the Boss? and Charmed, said she believed Blasey Ford and called on senators to reject Kavanaugh’s nomination.

She wrote: ‘Every person who refuses to loudly and openly reject Brett Kavanaugh’s nomination is telling every generation of Americans that an alleged abuser’s career is more valuable than a survivor’s humanity’. 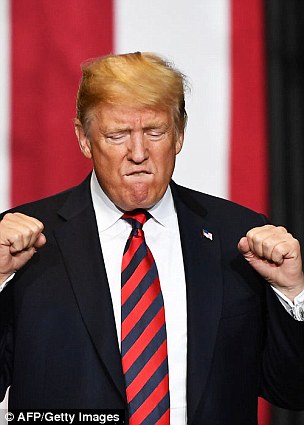 Last week , Milano used her time at the Netflix Emmy after party on Monday to show her support for women who have accused Supreme Court nominees of sexual assault, wearing badges with their names on.

Attached to the star’s clutch were small pink badges that read ‘I still believe Anita Hill’, and ‘I believe Christine Blasey Ford’.

In response to sexual misconduct allegations against Hollywood producer Harvey Weinstein, Milano sent a tweet that turned the hashtag #MeToo into a rallying cry against sexual assault and harassment.

In December, Milano and Tarana Burke, the creator of the original Me Too movement back in 2006 were recognized among Time magazine’s “Silence Breakers” as the person of the year.

Milano has canvassed for local, state, and national candidates since 2004. 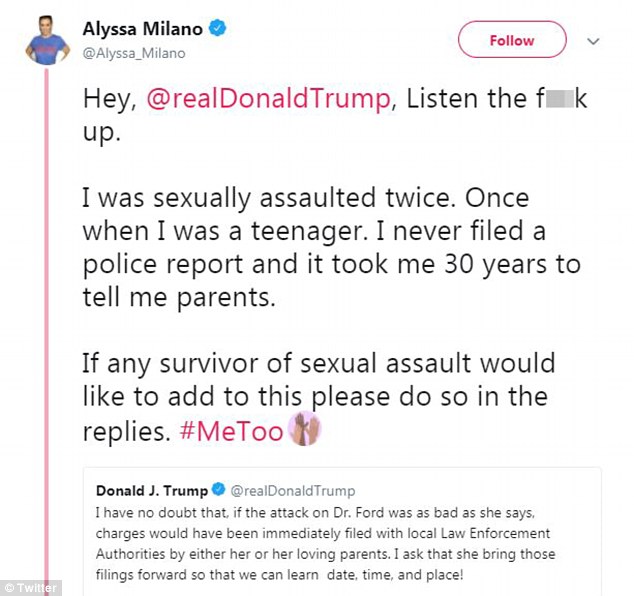 Asked if she would ever consider a political run herself, the mother of two replied: ‘I think so, yes. But I need my kids to be grown before that happens.

‘I have great hopes for the future of our country, and I’ve never lost hope,’ she added.

‘I’m fascinated by the political process and watching it crumble from the corruption, but also how there has been so much that has risen from the ashes of that crumble’. 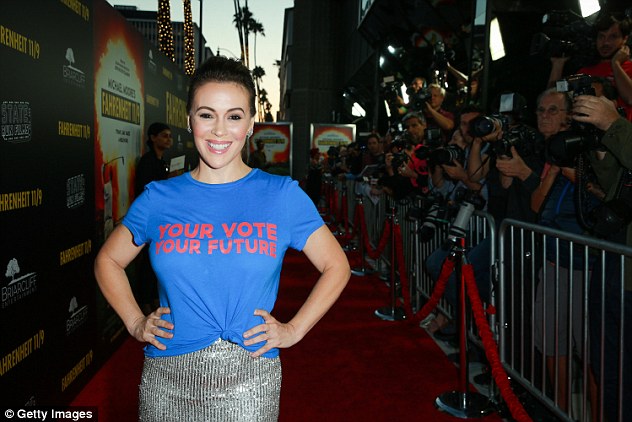 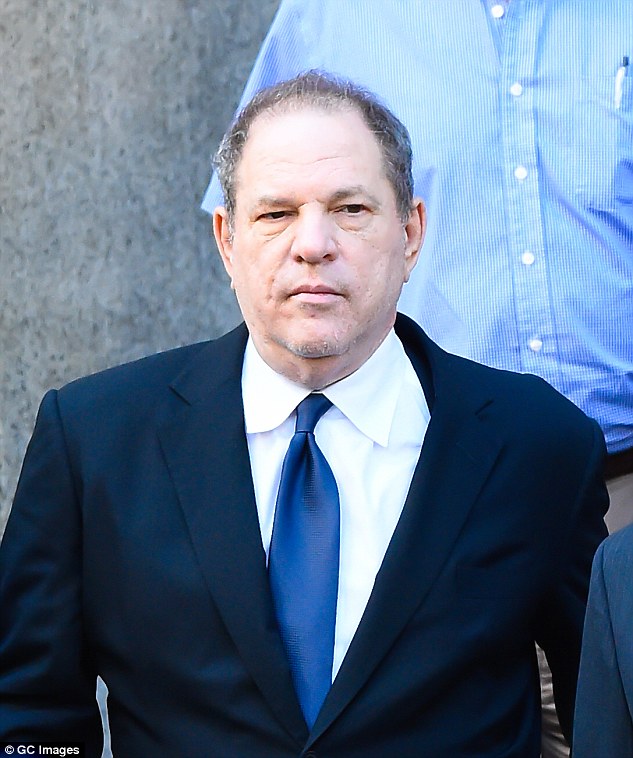 She has served as an ambassador for UNICEF since 2003. Recently Milano said she was glad to be able to use her public profile for the greater good and to highlight gender equality issues.

‘I think in the last year, we have watched many of our rights be stripped away, whether it be women’s rights or decisions for corporations but not for the American people.

‘And I think everyone has found their voice to say no, we’re not going to be able to do this anymore,” she said.

‘I feel blessed that I am able to use my platform to amplify what is going on in the country’.