News media are more likely to report on a novel scientific finding about Alzheimer’s disease if the authors fail to disclose in their paper’s title that the research was done in mice, a new study finds.

This means outlets are about 30 percent more likely to report on studies where rodents were not featured in the title.

What’s more, reporters are likely to follow a scientist’s lead and also omit ‘mice’ from their news headlines – misleading readers who might think a scientific finding is closer to a new treatment or cure than it truly is.

The Brazilian study provides data for a well-established trend in popular science reporting, suggesting that scientists should be more careful in writing titles for their papers.

Papers that omitted ‘in mice’ from their titles saw 30% more news articles compared to those that included ‘in mice,’ a new study found (file image)

Mice are a common study subject for medical research.

Scientists use mice as a ‘model,’ using their reactions to potential treatments for disease as a way to represent how humans might react before actually testing anything in humans.

The mouse model is especially common for Alzheimer’s disease. About 200 rodent models – including mice and related animals – have been developed to study the condition.

Alzheimer’s is a condition that only impacts humans, however and no treatment tested in mice has actually panned out when tested for people.

In fact, there are currently no drugs available that can cure this disease, which impacts over six million Americans.

The wide-ranging reach of Alzheimer’s, combined with its lack of a cure, combined further with the common use of mice to study the disease, makes this condition especially vulnerable to a worrying trend in popular science reporting.

HOW TO DETECT ALZHEIMER’S DISEASE

Media outlets reporting on new science often sensationalize new studies by failing to specify in headlines that a study was done in mice.

Such a reporting tactic can lead readers to think that science has made a great breakthrough for human patients  when in fact much more research is needed before a treatment might become available.

The phenomenon is so widespread that a Twitter account calling attention to the issue, ‘@justsaysinmice,‘ has attained over 70,000 followers since it was founded in April 2019.

The account comments on new articles that omit mice from their titles with ‘IN MICE’ – reminding followers of the study model.

But as much as media outlets may sensationalize new research, some blame can also be placed on scientists themselves, according to a new study published Tuesday in PLOS Biology.

Two scientists from Humane Society International and the Oswaldo Cruz Foundation in Brazil looked at over 600 papers on Alzheimer’s published in open-access journals during 2018 and 2019.

All papers described Alzheimer’s research conducted in a mouse model.

Out of 623 papers included in the study, 405 specified in their paper titles that their research was done in mice. The other 208 did not specify.

The researchers then looked at media coverage of the papers, using a service called Altmetric that tracks news stories and social media.

Those papers that failed to specify ‘in mice’ in their titles saw significantly more media coverage – an average of 3.9 stories per paper, compared to 3.0 stories per paper for those that did specify the research was done in mice.

If the scientist is more sensationalist – not mentioning the mouse model – a journalist will be, too.

‘When authors omit mice from the paper’s title, writers of news stories reporting on these papers tend to follow suit,’ the researchers wrote. ‘What we see is that in most cases their headlines do not mention mice either.’ 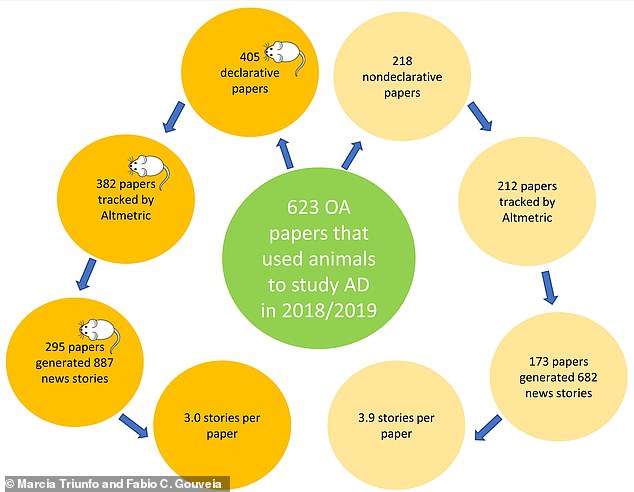 In addition, the researchers found that omitting-mice papers generated far more attention on social media – an average of 18.9 tweets per paper compared to 9.7 tweets per paper for those that did specify their mouse model.

In a press release, the researchers provided examples of sensationalist news stories based on mouse studies: ‘Common nutrient supplementation may hold the answers to combating Alzheimer’s disease’, ‘How flashing lights could treat Alzheimer’s disease’ and ‘How Exercise Might ‘Clean’ the Alzheimer’s Brain,’ among many others.

Such articles could give false hope to Alzheimer’s patients and their families, as there are many scientific steps between success in mice and feasible treatment in humans. 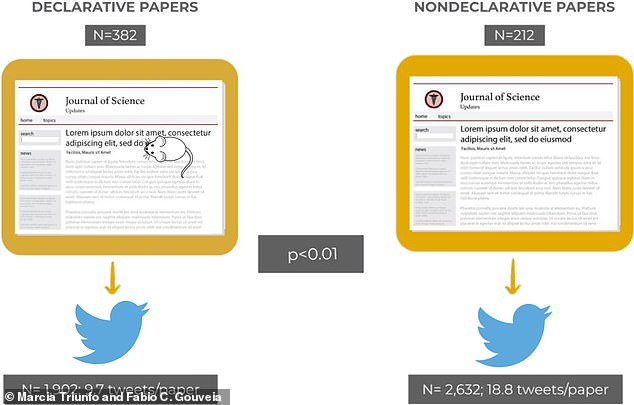 ‘The vast majority of potential treatments discovered through experiments on mice are ineffective when tested in humans,’ said Dr Marcia Triunfol, Humane Society International’s scientific advisor and one of the study’s authors.

‘Despite this significant flaw in the animal models, we show that articles glossing over the fact that the results were obtained using animals are given increased visibility and therefore implied credibility by the media.’

‘The reporting of animal research needs to be addressed with far greater caution and more prominent disclaimers in mainstream media to ensure the public understands that the results of animal experiments may have little to no relevance to human patients,’ she said.

In the paper, Triunfol and her colleague Dr Fabio Gouveia point to the Animal Research: Reporting of In Vivo Experiments (ARRIVE) guidelines as one potential solution to the issue.

The guidelines could be revised, they suggest, so that scientists are encouraged to review each other’s paper titles in addition to the contents of those papers. The ARRIVE guidelines could even go so far as to require paper titles to ‘identify the species and/or tissue sources used’ in research.

With such an amendment, paper titles – and news headlines – might get a bit more boring, but scientific understanding would improve.