She use her address at a UN event in New York to beg the de facto Myanmar leader to pardon Wa Lone, 32, and Kyaw Soe Oo, 28, who are accused of breaching Myanmar’s state secrets law under colonial-era Official Secrets Act while reporting on the massacre of Rohingya Muslims.

Earlier this month Suu Kyi defended the jailing hitting back at global criticism of a trial widely seen as an attempt to muzzle the free press and the Myanmar government’s involvement in ethnic cleansing. 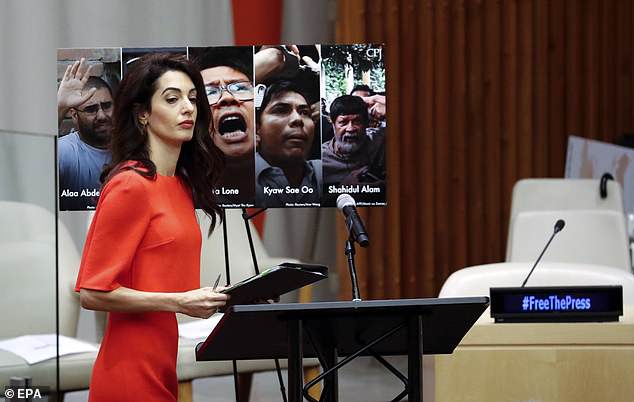 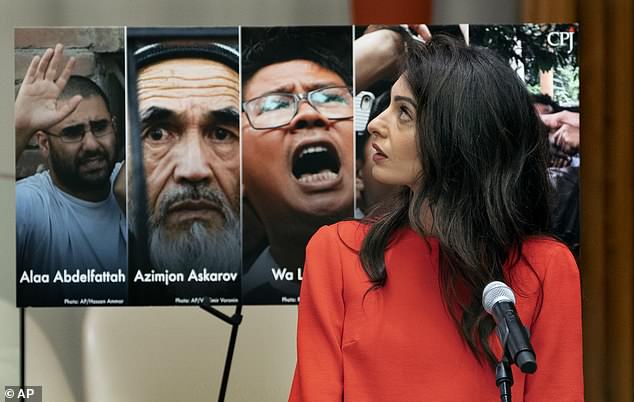 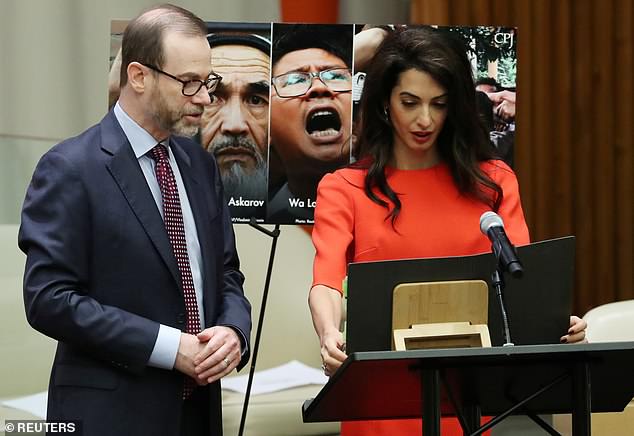 Reuters Editor-in-Chief Stephen Adler alongside Mrs Clooney. She added that massacres were not ‘official secrets’ and so journalists should not be prosecuted for reporting on the Rohingya killings

Today the British-Lebanese human rights lawyer told an event dedicated to press freedom at the United Nations General Assembly, that Suu Kyi knows what is is like to be a political prisoner, having spent time held at the same prison and should free both men.

She said: ‘The government can, if it wants to, end it today. She knows that mass murder is not a state secret and that exposing it doesn’t turn a journalist into a spy.

‘The key to truth and accountability, and the key to a more democratic and prosperous Myanmar. History will judge her on her response.

‘Aung Sang Suu Kyi knows better than anyone what it is like to be a political prisoner in Myanmar.

‘She has slept in a cell at the prison where Wa Lone and Kyaw Soe Oo now sleep.’

Suu Kyi, once garlanded as a global rights champion, has come under intense pressure to use her moral authority inside Myanmar to press for a presidential pardon for the reporters. 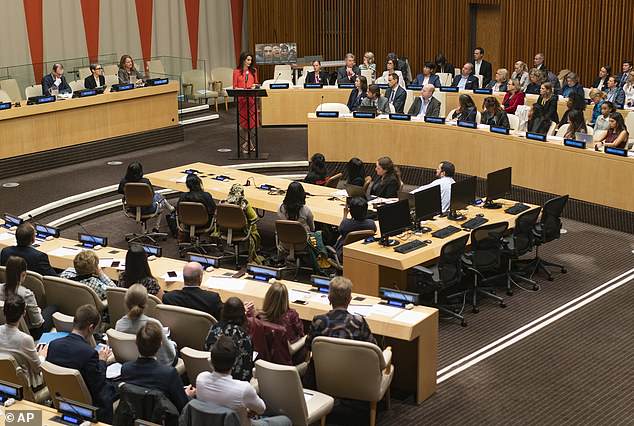 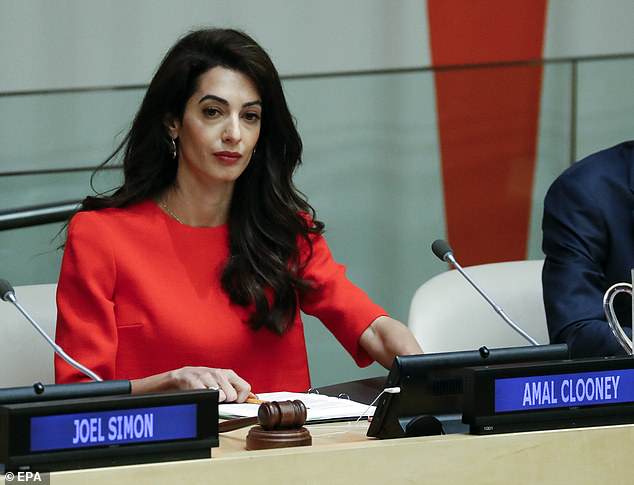 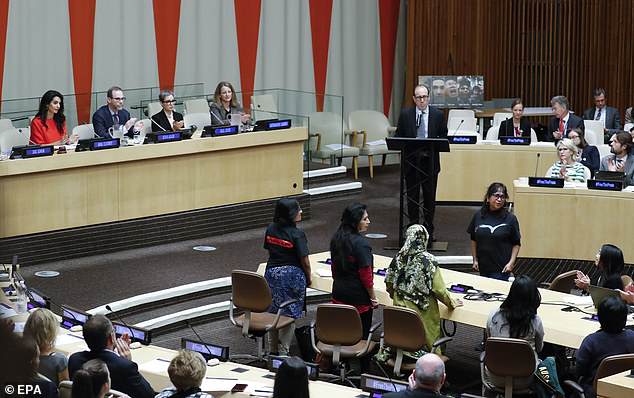 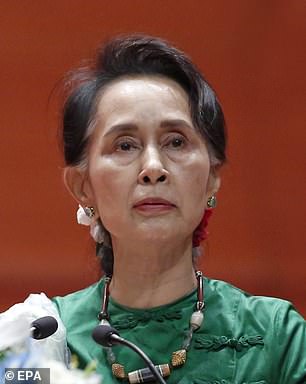 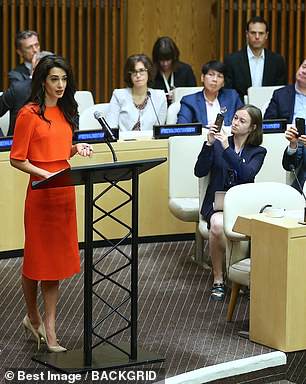 Mr Clooney added that the reporters’ wives wrote ‘a really heartfelt letter’ to the government about a week ago pleading for a pardon, not because their husbands had done anything wrong, but because it would allow them to be released from prison.

The reporters pleaded not guilty and have been detained since December.

Kyaw Soe Oo has a three-year-old daughter. Last month, Wa Lone’s wife gave birth to their first child, a girl, whom Mrs Clooney said Wa Lone has not yet met.

Mrs Clooney said the audience that when she was a student at St Hugh’s College, Oxford, the Nobel peace laureate, who studied at the same college 30 years earlier, had been a hero to me’.

Army-led ‘clearance operations’ drove 700,000 Rohingya into Bangladesh, carrying with them widespread accounts of atrocities including rape, murder and arson by Myanmar police and troops. 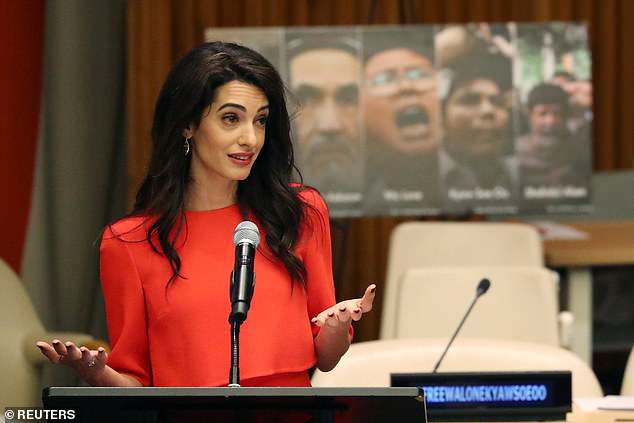 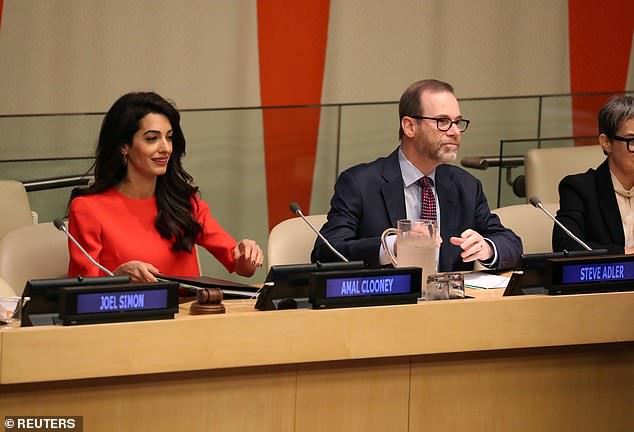 One of the jailed men’s wives gave birth to their first child, a daughter, whom Mrs Clooney said he has not yet met due to his prison sentence 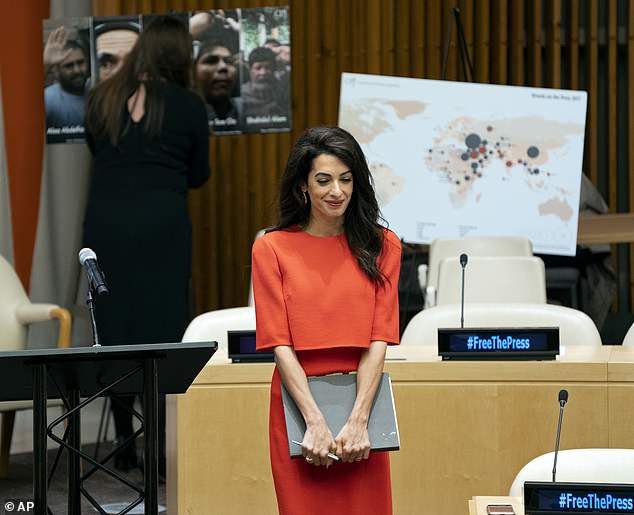 Mrs Clooney said: ‘Aung Sang Suu Kyi knows better than anyone what it is like to be a political prisoner in Myanmar. She has slept in a cell at the prison where Wa Lone and Kyaw Soe Oo now sleep’

The case, which sparked an international outcry, was seen as an attempt to muzzle reporting on last year’s crackdown by Myanmar’s security forces on the Muslim Rohingya minority in Rakhine state.

A UN mandated fact-finding mission said Myanmar’s military carried out mass killings and gang rapes of Muslim Rohingya with ‘genocidal intent’ and called for top generals to be prosecuted.

The reporters say they were set up while exposing the extrajudicial killing of ten Rohingya Muslims in a Rakhine village last year.

‘This case is about much more than two innocent men,’ Clooney told Reuters after the event. 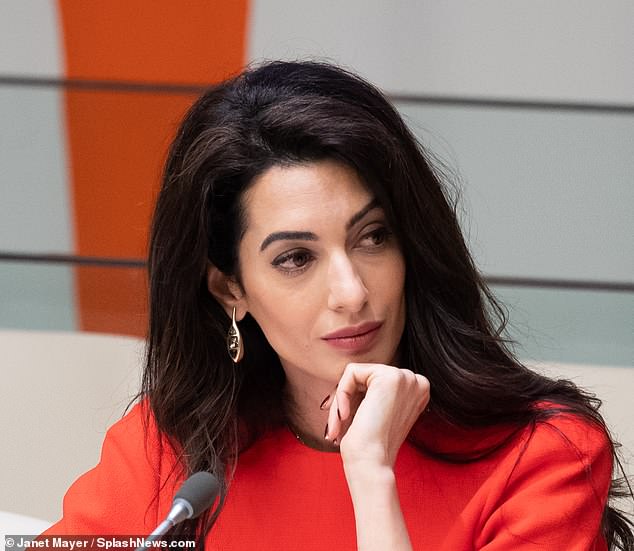 Amal Clooney added that ‘this case is about much more than two innocent men’, after her address 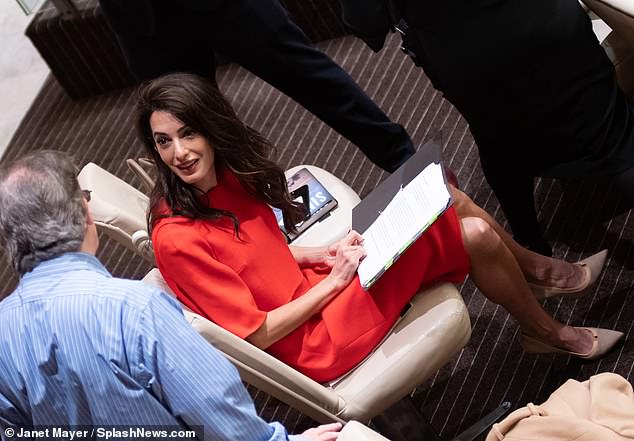 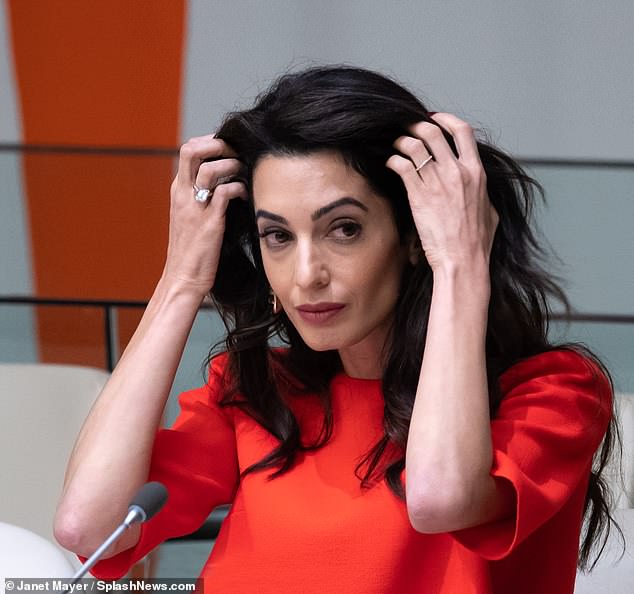 The case, which sparked an international outcry, was seen as an attempt to muzzle reporting on last year’s crackdown by Myanmar’s security forces on the Muslim Rohingya population 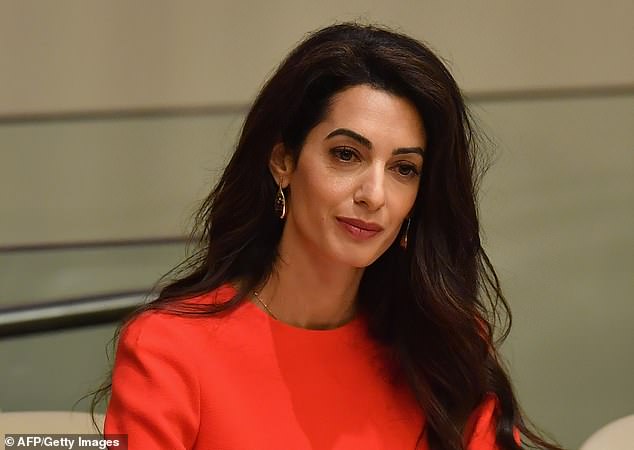 ‘If you care about press freedom you care about this case … Without a free press you cannot have democracy because you don’t know how to judge what your government’s doing.’

Mrs Clooney, wife of Hollywood actor George, announced in March that she would join the legal team representing the two jailed journalists.

She added that said Myanmar’s President Win Myint would make the decision to issue a pardon in consultation with Suu Kyi.

The Committee to Protect Journalists (CPJ) said a record 262 journalists were jailed worldwide in 2017, with Turkey, China, and Egypt responsible for imprisoning 134 of those journalists.