Taylor Swift made a surprise appearance at the 2022 American Music Awards in LA on Sunday to accept the  Favorite Pop Album award – amid her tour ticket fiasco with Ticketmaster.

Accepting the gong for 2021’s Red (Taylor’s Version), the star, 32, who skipped the red carpet said: ‘Wow. This album is a re-recorded album, and I cannot tell you how much my rerecorded albums mean to me, but I never expected or assumed that they would mean anything to you.

‘So I can’t thank you enough for caring about this album that I’m so proud of. I have some people who made this happen who I really want to thank.

Red (Taylor’s Version) was one of six albums Taylor re-recorded after Scooter Braun purchased her entire music catalog out from underneath her and then sold it without her knowledge for $300million to Shamrock Holdings.

She added: ‘Chris Row who co-produced this album with me, hours and hours and hours in the studio recreating Red, an album I love so much. I want to thank all the artists who featured on the vault tracks,

Wow: Taylor Swift made a surprise appearance at the 2022 American Music Awards in LA on Sunday to accept the Favorite Pop Album award – amid her tour ticket fiasco with Ticketmaster.

‘Chris Stapleton, Phoebe Bridgers. I want to thank my live touring band who played on this album, and I want to take a moment — there was a music video that I did that I was very happy about, so I want to say thank you to Sadie Sink and Dylan O’Brian, and my brilliant director Blake Lively, and Mike Teller and Kelly Teller for being in the music video.

‘I want to thank you guys for making this a possibility for To the fans, I cannot thank you enough. This is so special. Thank you.’

Taylor, who last week revealed she was ‘p****d off’ following Ticketmaster’s botched handling of sales for her The Eras Tour, looked radiant in a glittering gold backless jumpsuit.

The Bejeweled hitmaker showed of a hint of her cleavage in the Hollywood glamor number, with her tresses styled in soft waves. 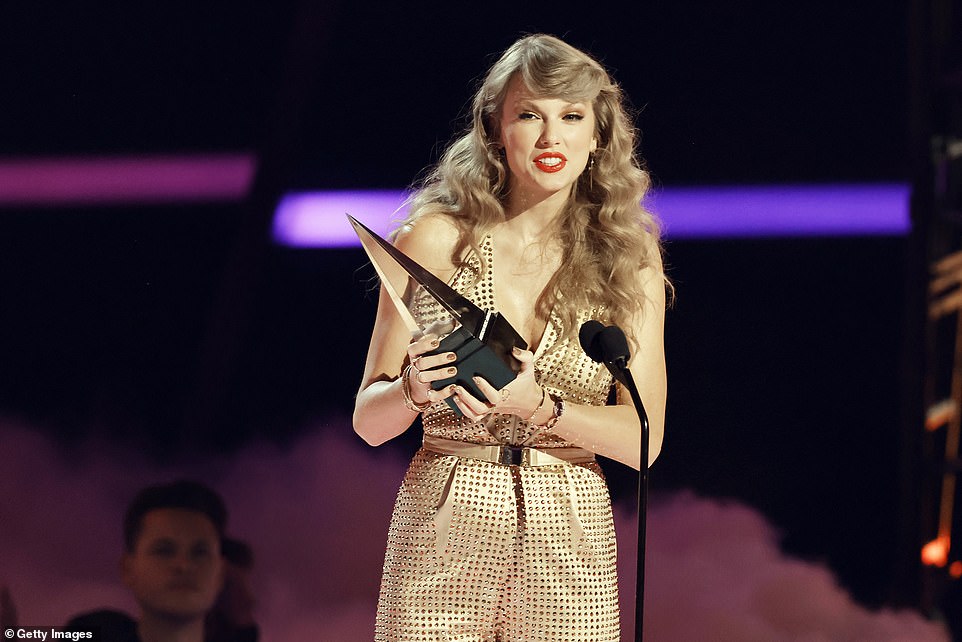 What fiasco? Taylor, who last week revealed she was ‘p****d off’ following Ticketmaster’s botched handling of sales for her The Eras Tour, looked radiant in a glittering gold backless jumpsuit 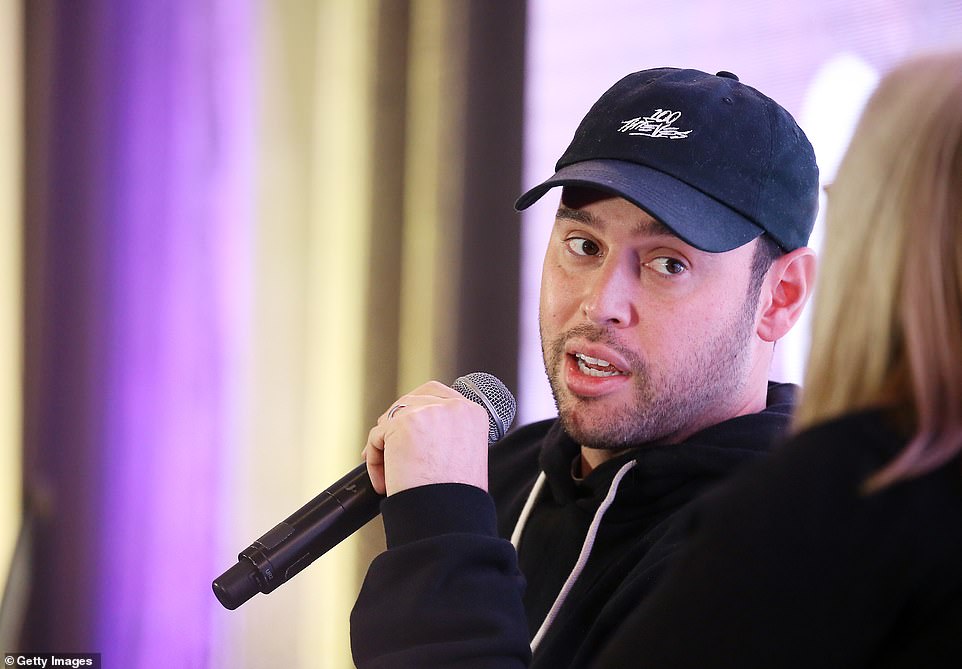 Feud: Red (Taylor’s Version) was one of six albums Taylor re-recorded after Scooter Braun purchased her entire music catalog out from underneath her and then sold it without her knowledge for $300million to Shamrock Holdings (Braun pictured 2019)

Back in 2019, Taylor called Scooter out over the sale in a social media post and claimed that he intentionally kept her in the dark while he turned a hefty profit on her hard work.

Prior to the that, in 2019 Braun had purchased Nashville-based independent record label Big Machine, first taking the rights to Taylor’s body of work and at the time, she voiced public outrage at being cut out of the deal.

Swift said the news made her ‘sad and grossed out’ because, in part, she claims Braun perpetuated ‘incessant, manipulative bullying’ against her for years.

This comes as Ticketmaster blamed a ‘staggering number of bot attacks’ for causing a tidal wave of problems for Taylor fans seeking to purchase tickets for her Eras Tour.

On November 1, Swift announced a 27-date tour across 20 U.S. cities, running from March to August next year – sparking fan chaos.

Tickets went on sale on Tuesday, but what Ticketmaster termed a ‘historically unprecedented demand’ from millions of fans saw the site crash repeatedly and the process descend into a fiasco, with her supporters furious at the soaring prices and spending hours waiting in line. 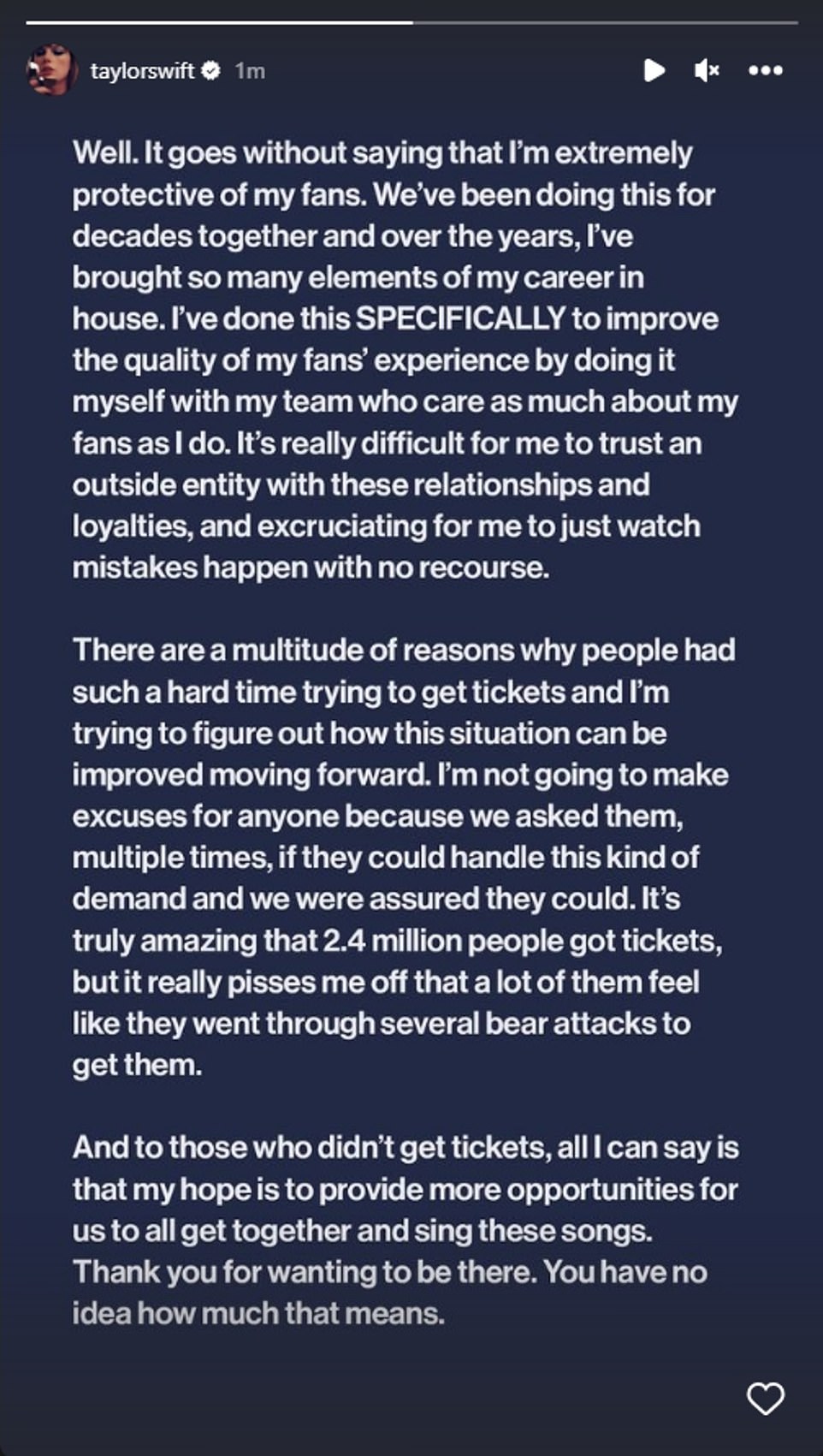 Last week Swift has blasted Ticketmaster for the mayhem surrounding her recent ticket sale, claiming that she was ‘assured’ the company could handle the high demand ‘multiple times’

This comes as Taylor blasted Ticketmaster for the mayhem surrounding her recent ticket sale, claiming that she was ‘assured’ the company could handle the high demand ‘multiple times’ and calling it ‘excruciating’ to ‘watch mistakes happen with no recourse.’

In a tweet, Ticketmaster said ‘Due to extraordinarily high demands on ticketing systems and insufficient remaining ticket inventory to meet that demand, tomorrow’s public on-sale for Taylor Swift | The Eras Tour has been cancelled.’

Now, Taylor has spoken out about the situation in a statement posted to her Instagram Stories, and she said she is just as ‘pissed off’ as everyone else is.

‘It goes without saying that I’m extremely protective of my fans,’ she began in the lengthy post.

‘We’ve been doing this for decades together and over the years, I’ve brought so many elements of my career in house.’

Taylor went on to explain – without mentioning the company by name – that she chose to use Ticketmaster’s Verified Fan system because she thought it would ‘improve the quality of her fans’ experience,’ despite it being ‘really difficult’ for her to ‘trust an outside entity.’

‘I’ve done this SPECIFICALLY to improve the quality of my fans’ experience by doing it myself with my team, who care as much about my fans as I do,’ she continued.

‘It’s really difficult for me to trust an outside entity with these relationships and loyalties, and excruciating for me to just watch mistakes happen with no recourse.’

The Cardigan songstress added that there were ‘multiple reasons why people had such a hard time trying to get tickets’ and that she’s currently ‘trying to figure out how the situation can be improved moving forward.’

‘I’m not going to make excuses for anyone because we asked them, multiple times, if they could handle this kind of demand and we were assured they could,’ she said.

‘It’s truly amazing that 2.4 million people got tickets, but it really pisses me off that a lot of them feel like they went through several bear attacks to get them.’

She concluded her message with a note to those who weren’t able to get their hands on a ticket, writing, ‘All I can say is that my hope is to provide more opportunities for us all to get together and sing these songs.

‘Thank you for wanting to be there. You have no idea how much that means.’

He leads fellow rapper Drake and pop superstars Beyonce and Taylor Swift on the list of contenders.

Bad Bunny received a total of eight AMA nominations and will compete for artist of the year against British singers Adele and Harry Styles and Canadian musician The Weeknd.

Drake, Beyonce and Swift also are in the running for artist of the year and received six nominations each. 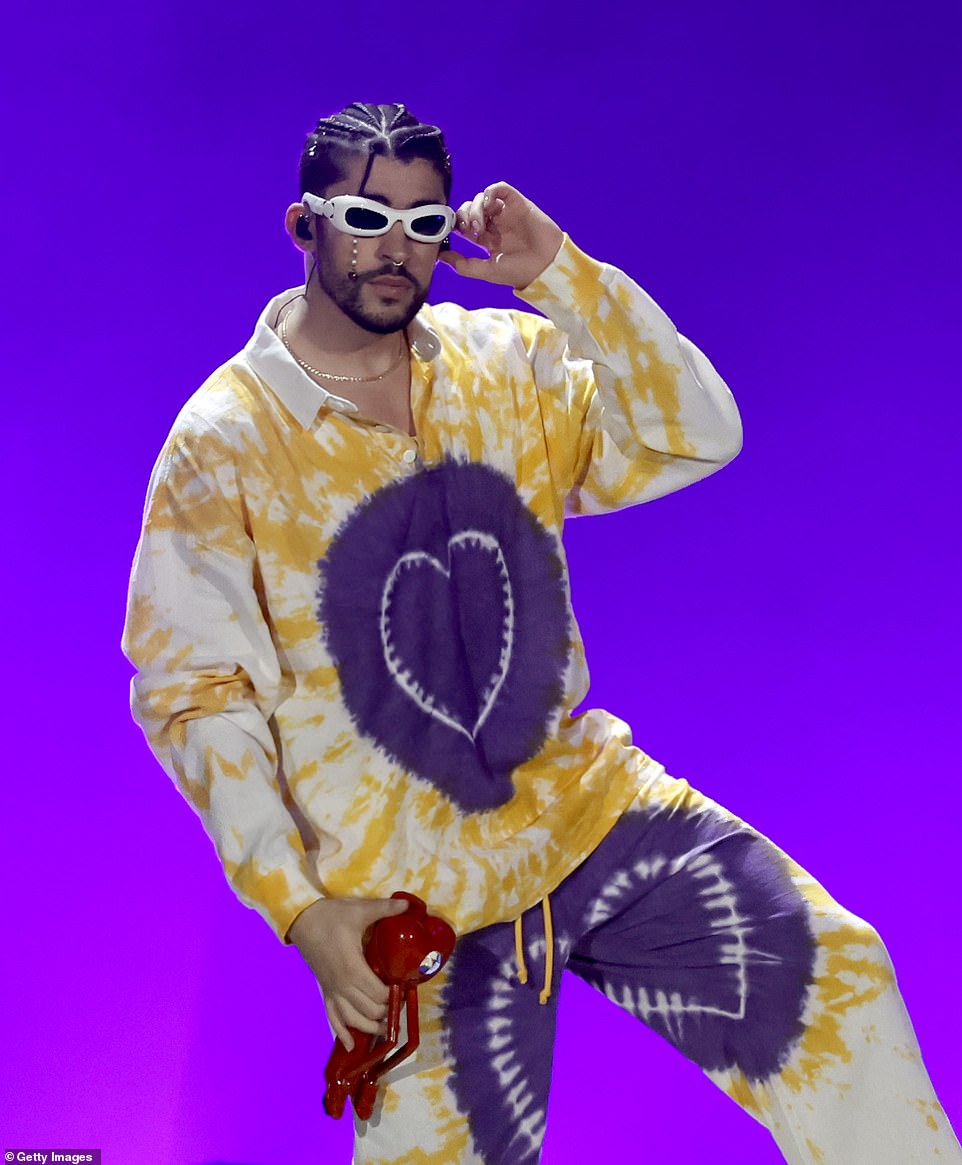 The nominations are based on performances on the Billboard music charts, streaming and album sales, radio play and social media engagement.

Winners will be determined by fan votes and announced at the ceremony at Microsoft Theater at L.A. LIVE in Los Angeles.

The singer set a record this year for the highest-grossing tour by a Latin artist in history. His album ‘Un Verano Sin Ti’ just topped the Billboard charts for a 13th week. 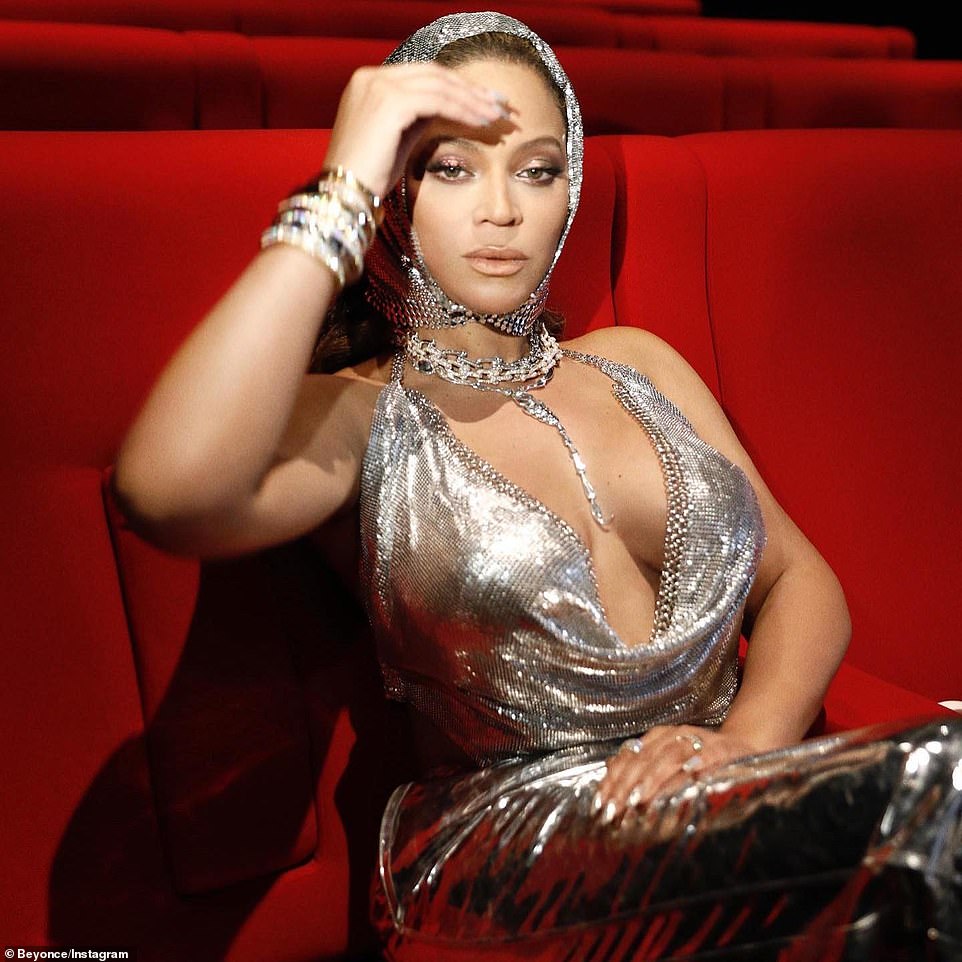 Bey is on the list: He leads fellow rapper Drake and pop superstars Beyonce and Taylor Swift on the list of contenders

If Bad Bunny wins all eight awards he is eligible for, he would tie 1980s superstars Michael Jackson and Whitney Houston for the most AMA wins in a single year.

Organizers added a category this year for favorite K-pop artist. Contenders are BTS, BLACKPINK, SEVENTEEN, Tomorrow X Together and Twice.

In country music categories, Chris Stapleton, Luke Combs and Morgan Wallen are among the nominees for favorite male country artist.

Pink is set to honor the late Olivia Newton–John with a musical performance at the show.

The performance in Newton–John’s memory follows her death at age 73 in August from a years-long battle with breast cancer.

The beloved British–Australian singer and actress had a lengthy association with the award show.

She co-hosted the ceremony with Aretha Franklin and Glen Campbell in 1976, two years before her success in films spread to the US with her role in 1978’s Grease.

Newton–John was also presented with 10 AMAs during her lengthy career.

Pink (real name: Alecia Moore) was previously announced as a performer at the AMAs, and her tribute number will be her second performance of the evening.

The hitmaker is also scheduled to give her new single Never Gonna Not Dance Again its live performance debut.

Lionel Richie will also be honored at the ceremony, where he is set to receive the Icon Award.

Stevie Wonder will be leading the performance for his contemporary, while Charlie Puth and Ari Lennox will be joining the keyboard virtuoso for a medley of Richie’s most popular material.

The ceremony, which is being hosted by Wayne Brady, was previously announced to have performances from Carrie Underwood, Imagine Dragons, JID, and Yola, among others.

Bebe Rexha and David Guetta will be performing their hit I’m Good (Blue), while Dove Cameron will make her debut at the show with a performance of her song Boyfriend.

The rapper GloRilla and Anitta will also be making their performance debuts at the show.

The seven member South Korean pop boyband – who also earned favorite pop group or duo and favorite pop song  – was given the most coveted crystal pyramid trophy of the night as they beat out heavy hitters including Ariana Grande, Drake, Olivia Rodrigo, Taylor Swift, and The Weeknd.

ARTIST OF THE YEAR

NEW ARTIST OF THE YEAR

COLLABORATION OF THE YEAR

Adele – Easy on Me

Harry Styles – As It Was

Chris Stapleton – You Should Probably Leave

Cody Johnson – Til You Can’t

Morgan Wallen – Wasted on You

Kate Bush – Running Up That Hill (A Deal With God)

Coldplay – Music of the Spheres

Adele – Easy On Me

Harry Styles – As It Was

Future –  I Never Liked You

Summer Walker – Still Over It