Amateur metal detectorists unearth Britain’s ‘largest ever’ haul of Roman coins worth £15,000 as 3,000 are found hidden inside a ceramic pot in Lincolnshire

A pile of 4th century Roman coins found by two metal detectorists is thought to be the largest hoard ever discovered in Britain.

More than 3,000 copper alloy coins were found inside a ceramic pot buried in a rural field in Lincolnshire in 2017.

Doctor Eleanor Ghey, curator of Roman Coin Hoards at the British Museum, believes they were buried around AD 307 following the emperor Constantius in York’s death.

At this time Roman coins had begun to be minted in London for the first time, she said, and then circulated throughout Britain.

‘As the largest fully recorded find of this date from Britain, it has great importance for the study of this coinage and the archaeology of Lincolnshire.’

A pile of 4th century Roman coins found by two metal detectorists is thought to be the largest hoard ever discovered in Britain. More than 3,000 copper alloy coins were found inside a ceramic pot buried in a rural field in Lincolnshire in 2017

The Romans established a uniform currency across their empire so that the same coins could be accepted at Hadrian’s Wall as in Carthage or Athens.

Most coins were struck in Rome until the end of the second century AD, by which time provincial mints were established.

Despite this, much of the cash used at the time came from other parts of the empire, including Lyons and Arles in France.

The trove, which was found in an oval pit lined with limestone, has now been officially declared treasure following an inquest hearing.

Lincolnshire archaeologist Adam Daubney, said: ‘What we found during the excavation suggests to me that the hoard was not put in the ground in secret, but rather was perhaps a ceremonial or votive offering.’

The detectorists Rob Jones, 59, and Craig Paul, 32, said finding the coins was an incredibly humbling experience that neither of them will ever forget.

Mr Jones, an engineering teacher said that he and planner Craig Paul began digging into the earth after their metal detectors started beeping.

He said: ‘I’ve found a few things before, but absolutely nothing on this scale. I was totally amazed.

‘To be there and see the pot appear out of the ground was really something.’

Experts believe the limestone pit suggests the coins were buried deliberately as part of a ceremony.

Mr Daubney suggests that the hoard was not put in the ground in secret, but rather was ‘perhaps a ceremonial or votive offering’. 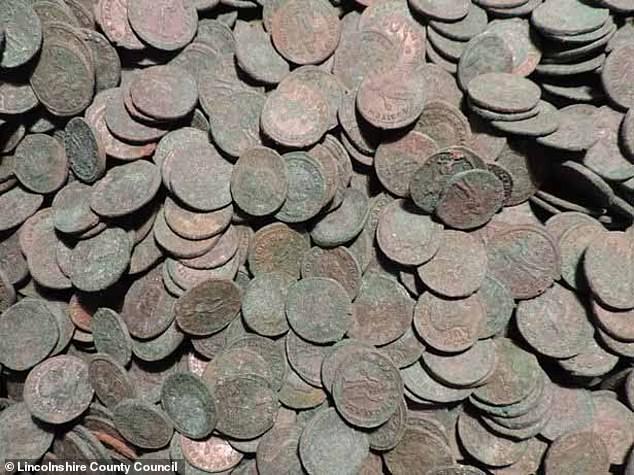 Based on early estimates, and valuations of similar copper troves, suggest a price in the region of £15,000. The coins are currently being examined by the British Museum and will be valued by a group of independent experts

‘The Rauceby hoard is giving us further evidence for so-called ‘ritual’ hoarding in Roman Britain.’

The coins are currently being examined by the British Museum and will be valued by a group of independent experts.

WHO WAS THE EMPEROR CONSTANTIUS OF YORK?

Constantius Chlorus (250AD – 306AD) who made his name in Britain defeating rebellious generals and fighting Picts north of Hadrian’s Wall.

While campaigning in Britain he was based in York (Eboracum), where he died and his son Constantine The Great succeeded him.

He rose from relative obscurity to become the Emperor of the western Roman empire.

He was a soldier who had worked his way up through the ranks but his real political break came when in 289 he married Theodora, the stepdaughter of the emperor Maximian.

By this time Constantius had already fathered a son called Constantine by another woman, Helena. Both Constantine and Helena went on to earn great renown in their own right.

In 293, the Roman Empire became a ‘tetrarchy’, meaning it was ruled by four different people. Constantius Chlorus was chosen by Maximian to be one of them – he became Caesar (junior emperor) of the northwest.

This was a tricky assignment because much of the territory was in the hands of a break-away empire led by naval commander Carausius and his allies the Franks.

That summer Constantius led a military campaign and regained control of Gaul, northern France. In 296 he did the same in Britain.

There followed nine years of relative peace which only came to an end in 305 when the Picts attacked the northern reaches of the empire in Britain.

As so often in its history, York became an important strategic centre in a battle for the north of England.

Constantius was by now Augustus, the senior emperor of the west.

He called for his son Constantine to join him in Gaul and together they headed to York. They enjoyed a series of victories over the Picts but then, on 25 July 306, Constantius became the second emperor to die in York.

Constantius’s first wife Helena became a saint after being credited with finding the relics of the true cross.

St Helen’s Church and Square in York are named after her.