Amber list travel: We reveal the secrets that will let you find some perfect peace in Greece

The UK government no longer advises against all but essential to the whole of Greece, including all of its idyllic islands, which run into the thousands.

While some of the more popular isles draw in the crowds, there are plenty of other outcrops waiting to be discovered.

Read on to learn about some of Greece’s lesser-known spots, which serve up sublime scenery, fascinating history and a sense of calm, and the best types of accommodation still available to book…

In the footsteps of Spartans… and party-loving gods 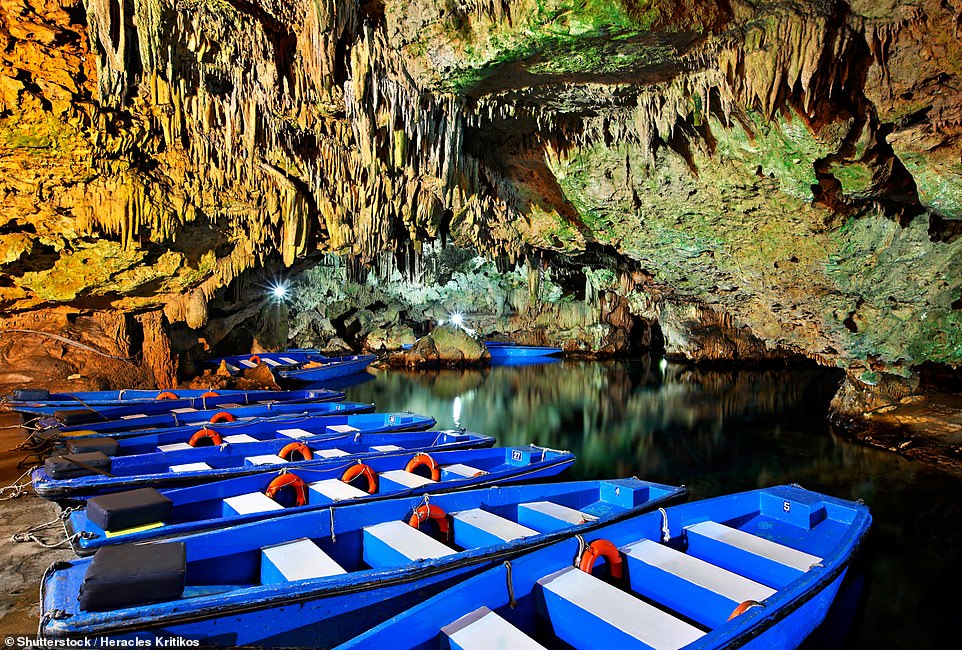 The rugged Mani peninsula, the middle prong of the Peloponnese, is one of Greece’s most isolated and starkly beautiful regions, with the Taygetus Mountains running down its spine. Its people claim direct descendancy from the ancient Spartans.

Tucked away near the bottom of the peninsula is Citta dei Nicliani, a rustic but chic hotel in a restored 18th Century tower, with just seven rooms plus two new interconnecting suites in a separate building.

It makes a great base from which to explore the surrounding wild scenery, perhaps walking to abandoned hilltop forts or immersing yourself in the ancient history of Sparta and Mystras.

Swim in rocky coves a short drive away, and visit the Diros Caves – one is more than a mile long that can be explored during a 40-minute boat trip. A week’s B&B costs from £647pp, excluding flights (cittadeinicliani.com).

For some dramatic mountain and lake scenery, head to Epirus in northern Greece, where you can stay in a lodge in the heart of the Zagori region, visiting cheese farms and vineyards as well as quaint villages with medieval arched stone bridges spanning babbling rivers.

Original Travel has a week’s fly-drive that includes hiking the impressive 3,281ft-deep Vikos Gorge with a guide before continuing to the scenic sandstone pinnacles capped by monasteries at Meteora. 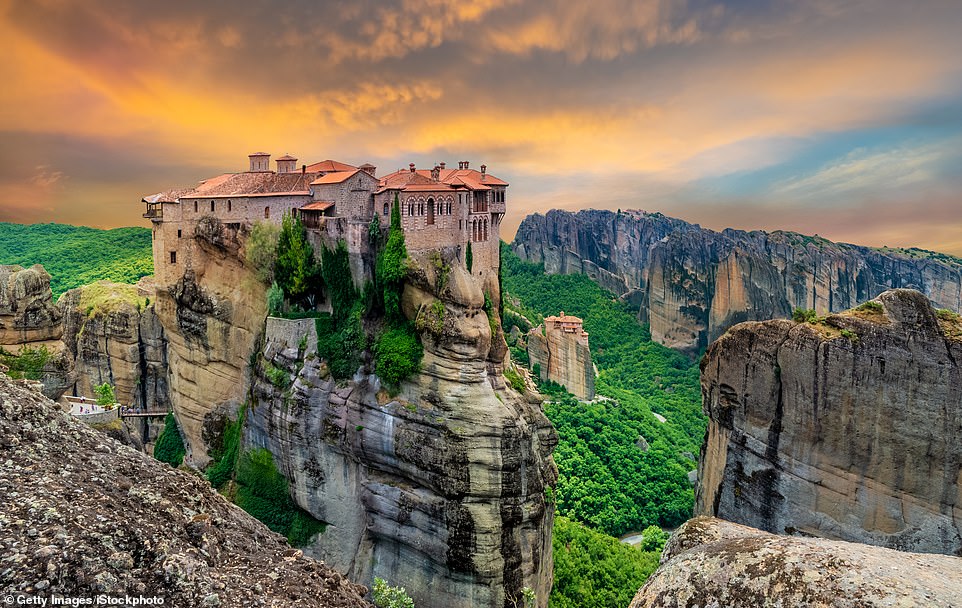 One of the stunning monasteries in Meteora, perched on a sandstone pinnacle 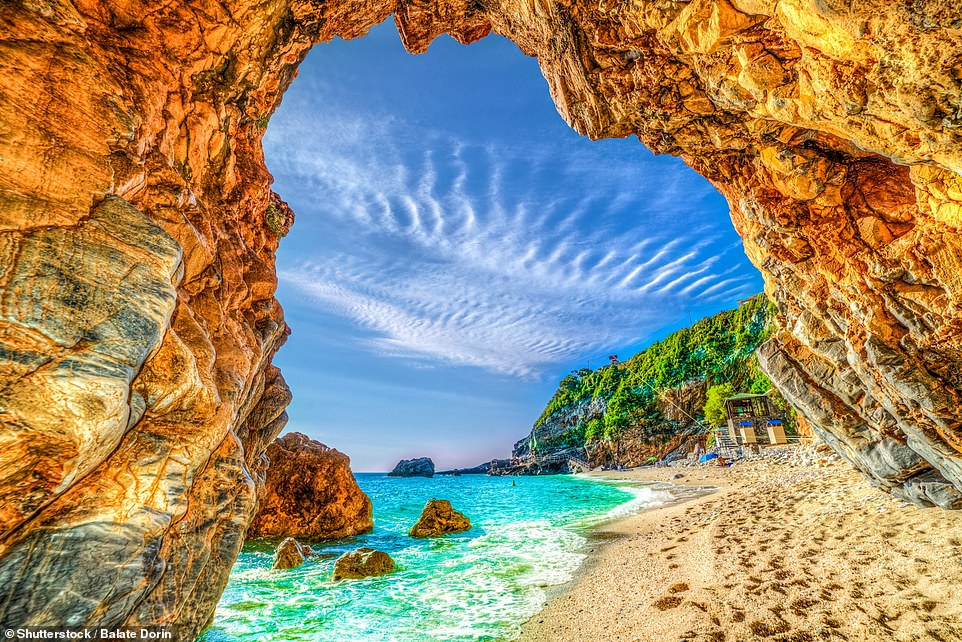 The glorious Mylopotamos beach on the Pelion peninsula, which is blessedly free from mass tourism

While the monasteries are among the most-visited sites in mainland Greece, the company’s guides use hidden trails known only to the locals that follow in the footsteps of the first monks who arrived in the area in medieval times.

A separate visit explores one of the six remaining monasteries once the day-trippers have left, ending with a magical view of the sun dipping behind the rocks. Six nights’ B&B costs from £1,660pp with flights (originaltravel.co.uk).

Alternatively, follow the gods, who, according to Greek legend, chose the Pelion peninsula between Athens and Thessaloniki for their revelries, but which is blessedly free from mass tourism.

With pretty villages, lush forests and hidden beaches, the area where Mount Pelion drops into the sea has a sprinkling of small pensions – or guesthouses – rather than big hotels. Greeks come here to ski in the winter and to swim in the summer.

Ionian Island Holidays has a number of villas in the area, including the simply furnished two-bed Villa Jason, with private pool in the village of Horto. A week-long trip, with flights, transfers and car hire, costs from £971pp (ionianislandholidays.com).

The tiny islands that will make a huge impression 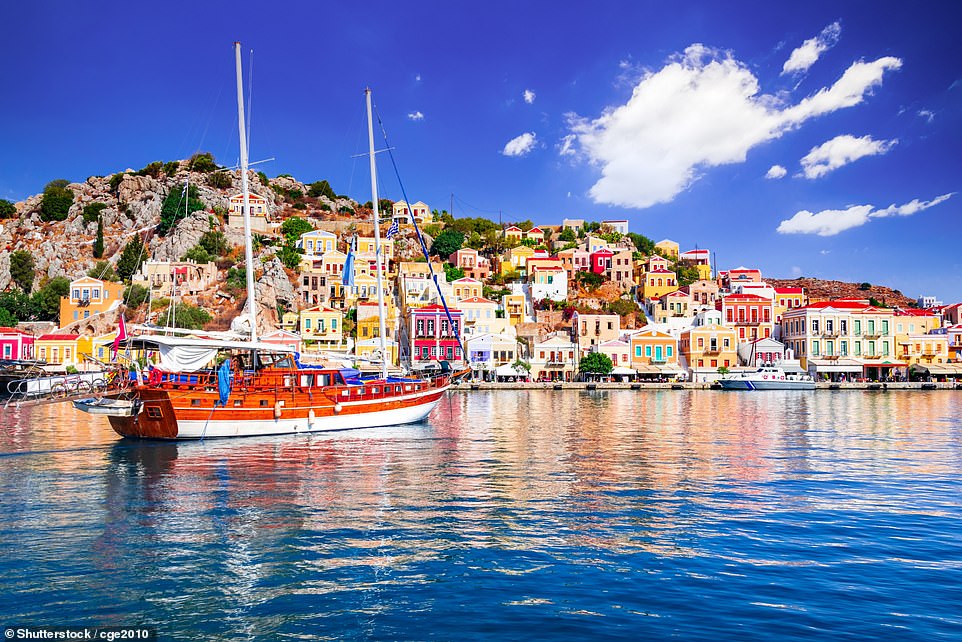 The stuff of legend: The colourful harbour in Symi is one of the prettiest in the Aegean 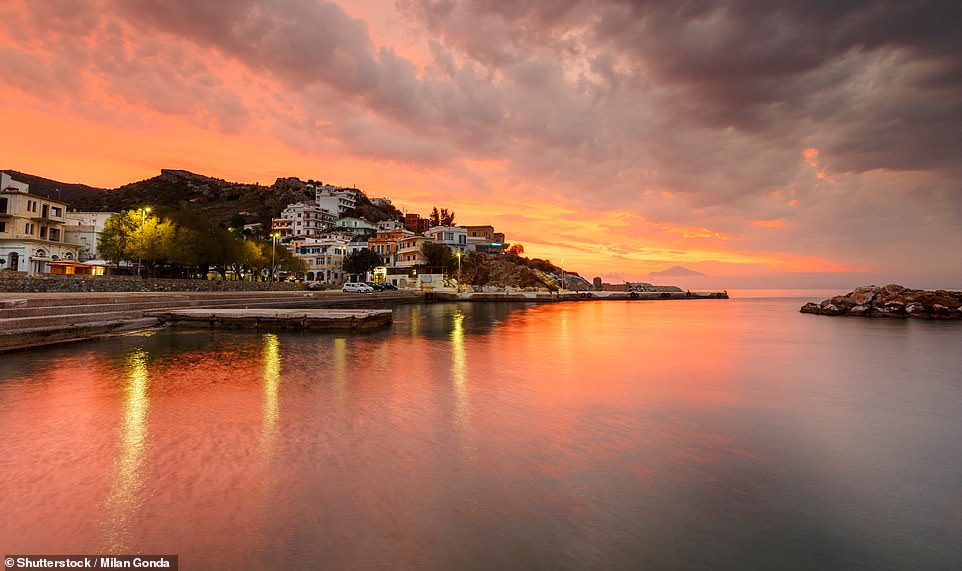 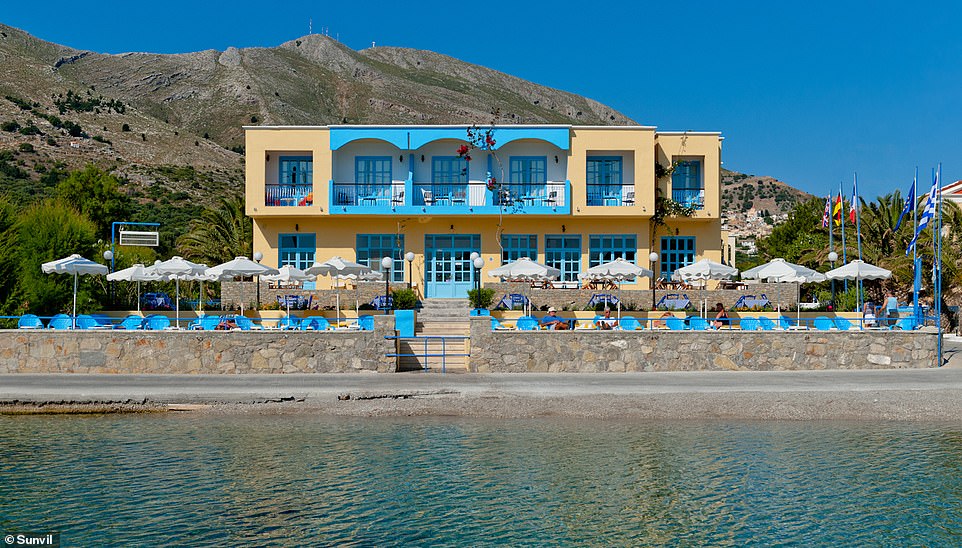 The Pedi Beach Hotel is located on the laid-back Dodecanese island of Symi, which is too small for its own airport and can be reached by ferry from Rhodes

Arriving at the laid-back Dodecanese island of Symi is part of the experience – too small for its own airport, it is reached by ferry from Rhodes. But it is worth it to be greeted by superb views of one of the most picturesque harbours in the Aegean, with its colourful red-roofed houses, all of which are listed buildings.

There are superb sea views, too, from rooms at Pedi Beach Hotel, which is right on a pebbly beach in the pretty village. A week’s B&B costs from £1,059pp, with flights and transfers (sunvil.co.uk).

Sunvil also runs holidays to Ikaria in the Aegean, which is one of the world’s Blue Zones – places where people live the longest as a result of their healthy diet and easy-going lifestyle.

The local goat’s milk, olive oil, organic vegetables and red wine must help, as well as the beautiful setting of sandy beaches and lush hillsides. Just don’t make too many journeys on the tortuous roads in the mountainous interior, which might make you feel you’ve shaved years off your life.

Stay in the Erofili Hotel by the fishing village of Armenistis, and take a dip in the seawater pool or in the sea at nearby Livadi Beach. A walking trail through the pine forest starts here, linking four villages and spanning 15 miles. Seven nights’ B&B costs from £978pp with flights and transfers (sunvil.co.uk).

It may be one of Greece’s most popular holiday destinations but Crete still has some off-the-beaten-track areas. In the remote, rugged landscape of the Asterousia Mountains in the south, a collection of 20 cottages form Thalori Retreat, which takes its name from its position between the sea (thalassa) and mountain (ori). With plenty of wood and stone, the stylish cottages – some contemporary, others more traditional – share a pool surrounded by rocks, and a restaurant on the site of an old monastery that uses produce from Thalori’s own farm.

The owner, Markos, takes guests on a number of complimentary activities, including a sunrise walk to Mount Kofinas, a cooking lesson, horse riding and a hike to the Monastery of Koudouma. Mountain biking, wine tasting and fishing can also be arranged. A week’s half-board with flights and car hire costs from £1,451pp (simpsontravel.com). 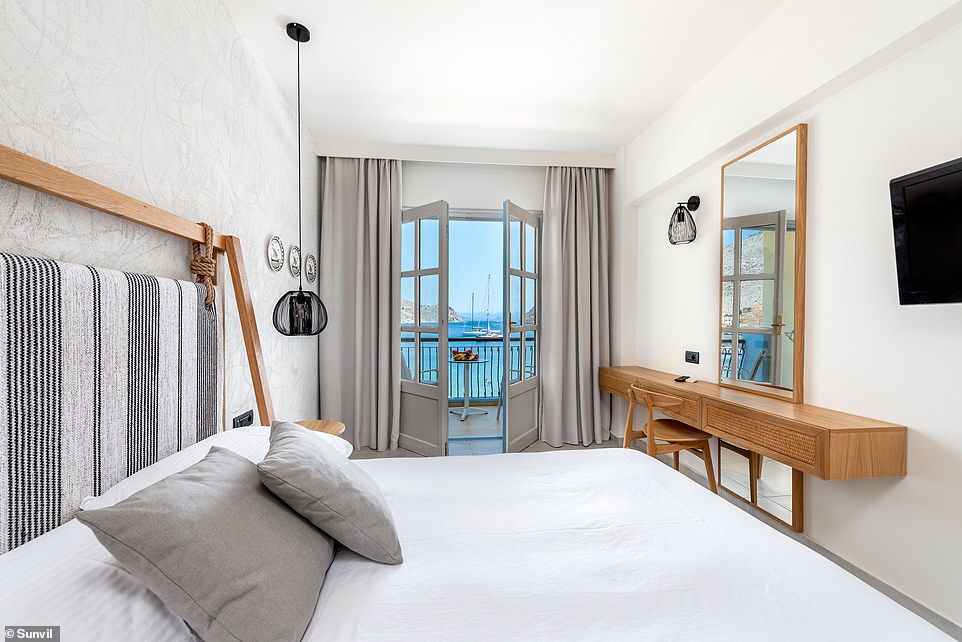 There are superb sea views from rooms at Pedi Beach Hotel, which is right on a pebbly beach 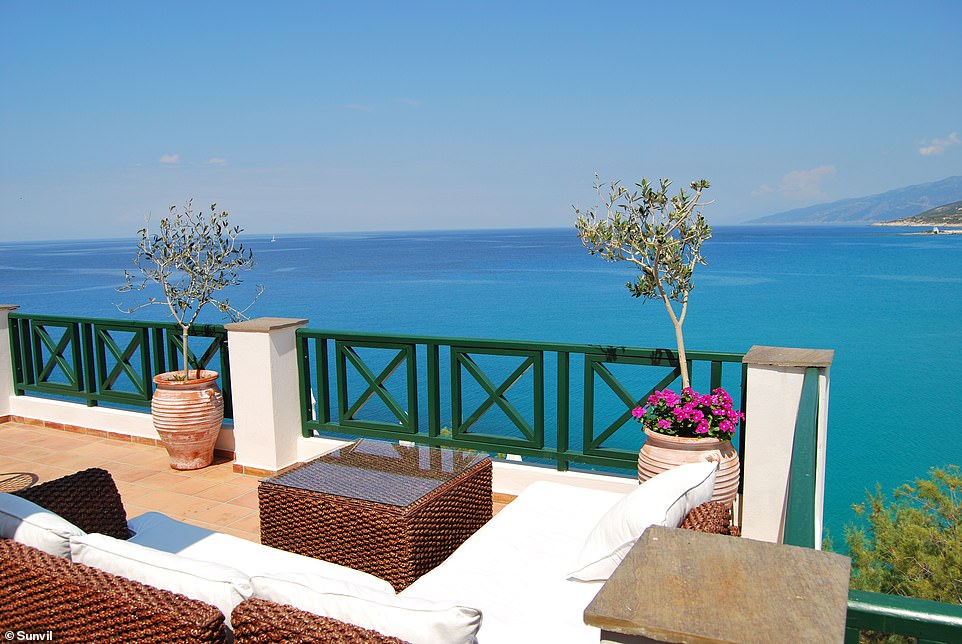 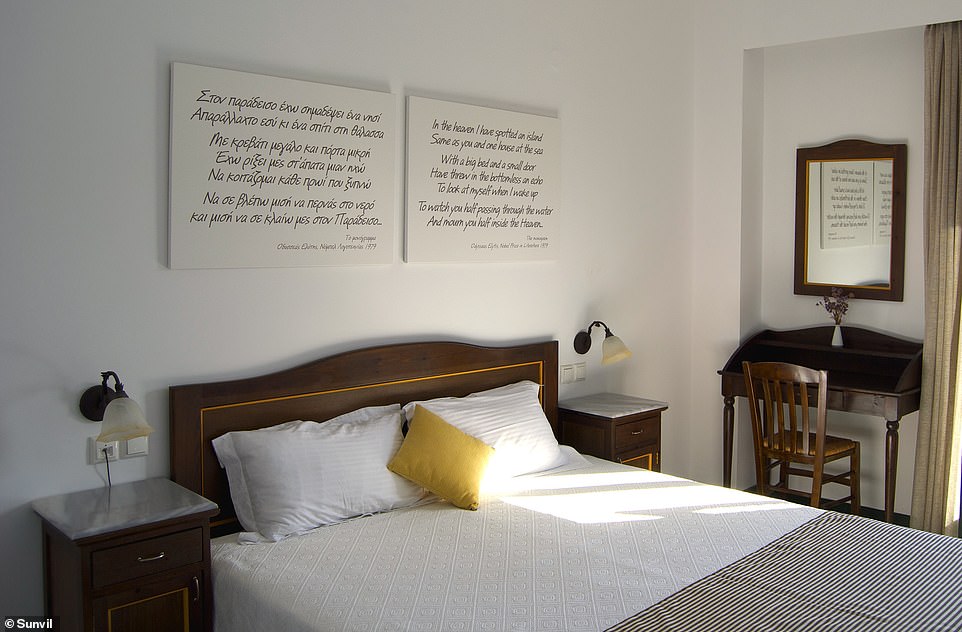 For a similar eco-village in the wilderness feel, try Onar on Andros, just a couple of hours by ferry from Athens. In the protected wetlands of Ahla Valley, this collection of 14 cottages lies between a white-sand beach on a secluded bay and a rockpool fed by a waterfall. Built from stone, wood and river reeds, with white and earthy interiors, the cottages make the perfect base to get away from it all.

Take a boat trip from the beach to explore the coast, which is scalloped by more than 70 beaches, or head inland on one of the networks of old shepherds’ footpaths to explore this lush island which feels a touch more Scottish Highlands than Cyclades. At night, dine on organic fresh produce from the vegetable garden. A week’s B&B costs from £1,255pp with flights and transfers (redsavannah.com).

Also in the Cyclades, The Rooster has just opened on the under-the-radar island of Antiparos, offering a luxuriously contemporary take on an authentic Greek hotel. With 17 beautifully designed suites, villas and houses, it is an ideal place to relax, with plenty of privacy and space.

A spa, with glorious views of the Aegean, offers ila treatments and yoga, and there is a farm-to-table restaurant. A week’s B&B costs from £2,800pp with flights via Athens (scottdunn.com).

Among the Ionian islands, Kefalonia may have become busier since its 2001 starring role in the film of Captain Corelli’s Mandolin, but there are still quiet corners, including the small peninsula of Cape Liakas, which doesn’t attract day visitors thanks to its no-through-road and a rocky beach rather than a stretch of sand.

Here, a group of 19 individually owned and decorated villas are available for hire, each with sea views. There are sunloungers and shade at the rocky shore, or it’s a five-minute drive to a sandy beach. A network of footpaths weaves among the lemon and olive trees – it’s a mile-and-a-half hike to the village of Spartia.

The simply decorated Villa Aris sleeps up to six and has its own pool and private garden. A week for four costs from £1,264, excluding flights (freelancevillas.com). 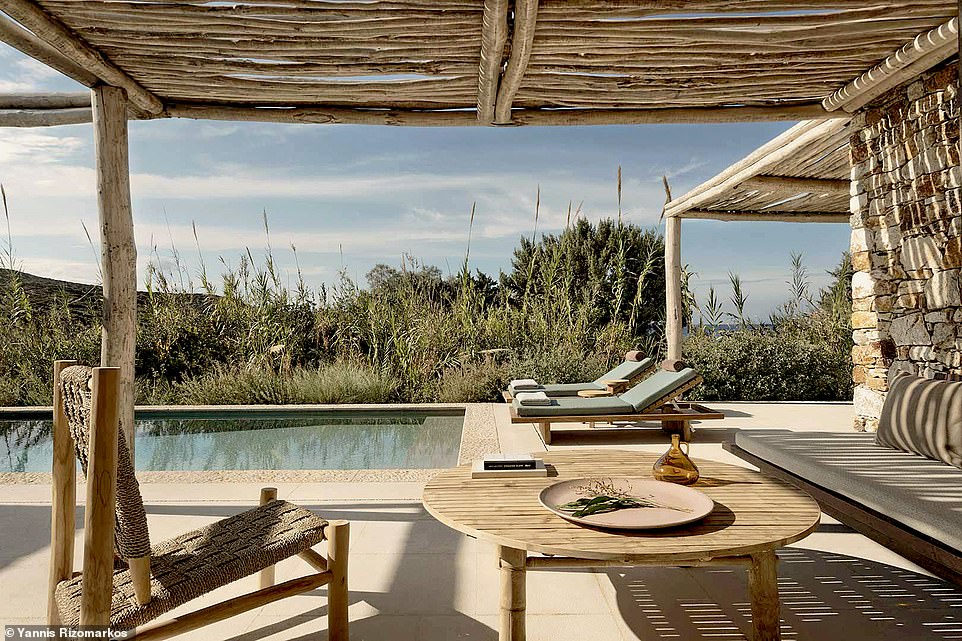 In the Cyclades, The Rooster has just opened on the under-the-radar island of Antiparos, offering a luxuriously contemporary take on an authentic Greek hotel. With 17 beautifully designed suites, villas and houses, it is an ideal place to relax, with plenty of privacy and space. Pictured, the view from a garden view villa 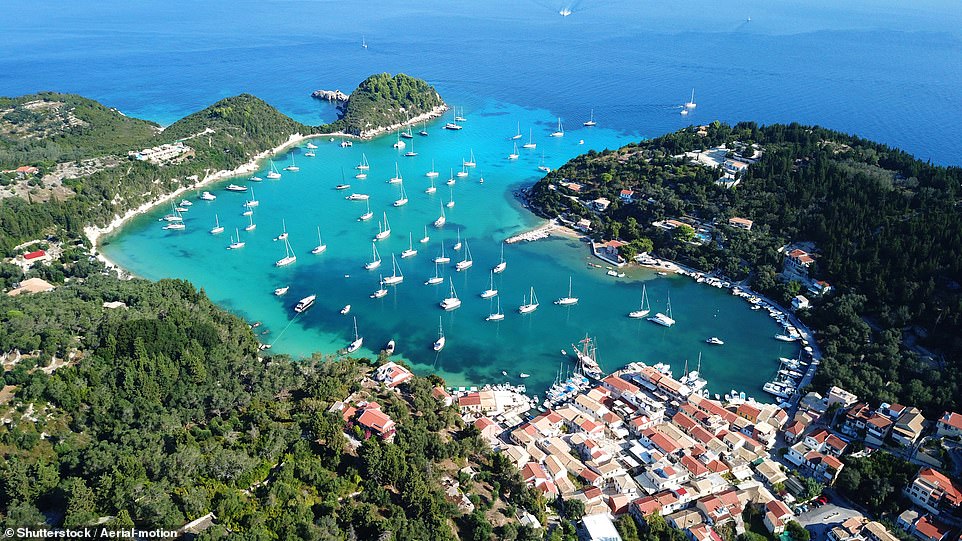 Little Paxos is an hour’s boat ride from Corfu, and comes with a laid-back atmosphere hanging over its prolific olive groves

A ferry ride away, Ithaca may be famous for being the home of the legendary hero Odysseus, but it is much sleepier than neighbouring Kefalonia. Stay on an organic olive oil farm on the island’s shores, with just four eco-luxe villas on the seven-acre Levendis Estate.

On a hillside with sea views, the villas are set within their own gardens and share a pool, open-air cinema and a large library. Enjoy a massage using herbs grown on the estate, practise yoga in the pavilion, or walk to the nearby beach. A villa for two costs from £2,200 a week, or £2,500 for four, with car hire but excluding flights (oneoffplaces.co.uk).

Meanwhile, little Paxos is an hour’s boat ride from Corfu, and comes with a laid-back atmosphere hanging over its prolific olive groves.

Hire a boat to see the best bits, pottering around the coast to stop at Galazio beach, which is accessible only by water, and to marvel at the natural rock arch of Kamara. Better still, head over for lunch at one of the tavernas on Paxos’s smaller, vine-covered neighbour, Antipaxos.

Villa company Scott Williams has many properties on Paxos, including the simple stone Koulka House, with a pool, sleeping four in the hamlet of Kastanida on the west coast. A week in Koulka House costs from £830, excluding flights (scottwilliams.co.uk).

Lunar landscapes – and island-hopping in style 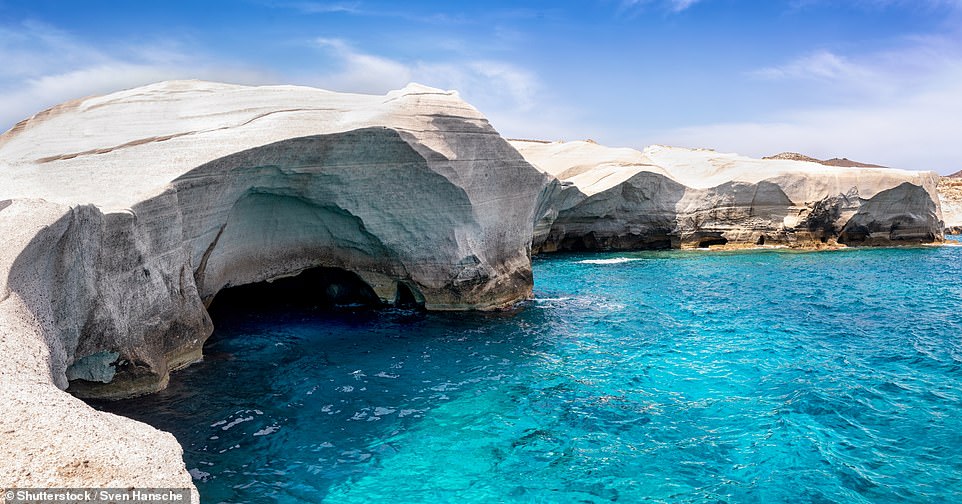 On volcanic Milos, explore the lunar landscape and soft sandy beaches along a shoreline that also features sea caves 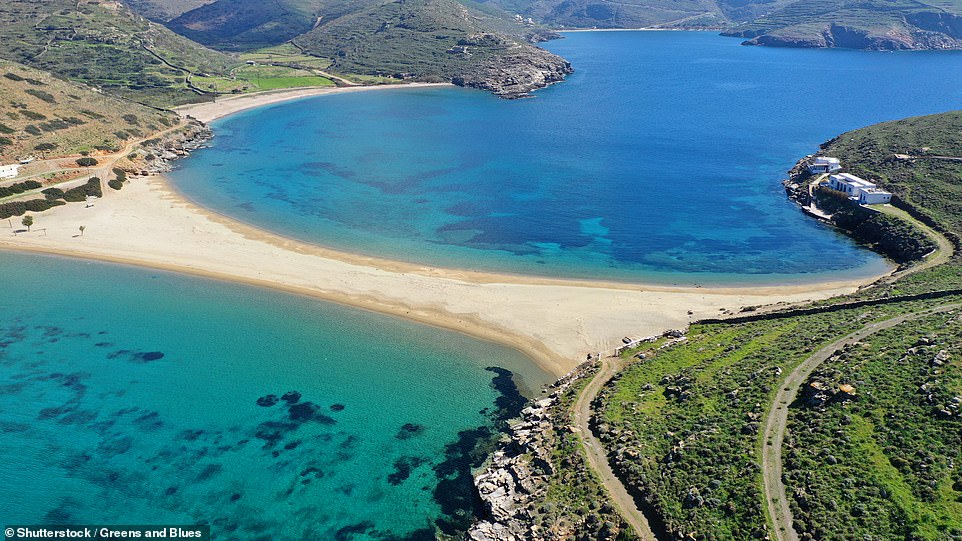 You can hire a catamaran complete with skipper and chef to sail round the less-well-known Cyclades, including the mountainous island of Kythnos, pictured

Why settle for one island when you could squeeze in lots more? Take in the imposing Chora town on a rocky hill on Serifos, and the vineyards and olive groves of Sifnos, where trails lead to little monasteries or a medieval fortified village (be sure to try the local speciality of mastelo – goat or lamb marinated in red wine and cooked in ceramic pots).

On volcanic Milos, explore the lunar landscape and soft sandy beaches along a shoreline that also features sea caves. Inntravel has a ten-night walking trip in September starting in Athens, including B&B but not flights, from £1,095pp (inntravel.co.uk).

You can also hire a catamaran complete with skipper and chef to sail round the less-well-known Cyclades. Tick off Serifos and Sifnos, Naxos and Paros as well as the wild, mountainous island of Kythnos.

Walk to Cape Kefalos to the ruins of a medieval city or visit the monastery of Panagia Kanala, and take a dip in the water off the beautiful Kolona beach. A week for eight costs from £2,900pp including food, drinks and mooring fees but not flights (sailsterling.com).

Prices are the cheapest available for a week from August to the end of October. All properties had good availability at the time of going to press.