An explosives-packed ambulance blew up in a crowded area of Kabul on Saturday, killing at least 95 people and wounding 158 others, officials said, in one of the biggest blasts to rock the war-torn city in recent years.

US President Donald Trump called for “decisive action” against the Taliban after the militant group claimed the assault — the second it has carried out in the Afghan capital in a week.

The attack triggered chaotic scenes as terrified survivors fled the area scattered with body parts, blood and debris, and hospitals were overwhelmed by the large number of wounded.

It came as both the insurgents and the Islamic State group have escalated their attacks on Kabul, one of the deadliest places in Afghanistan for civilians. 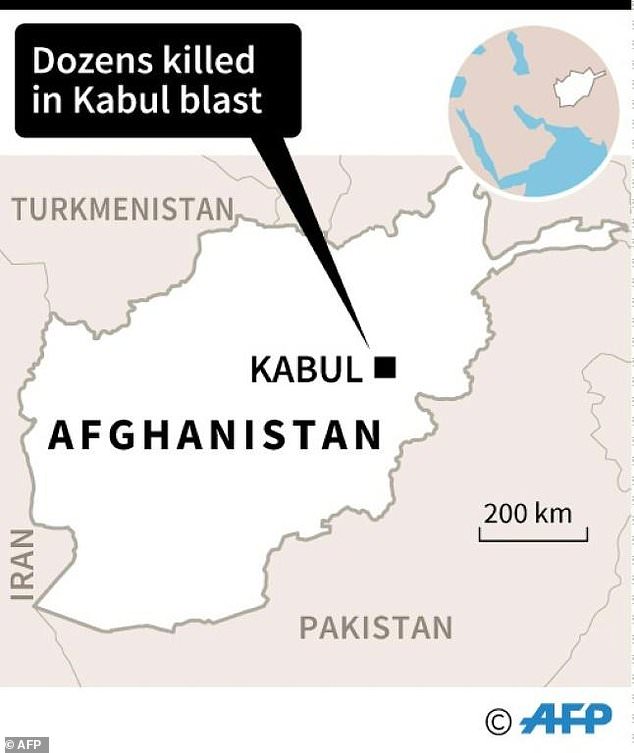 Map of Afghanistan locating capital Kabul, where an explosives-packed ambulance blew up Saturday

An AFP reporter saw “lots of dead and wounded” civilians in the Jamuriate hospital, which is metres away from the blast and where medical staff struggled to treat the bloodied men, women and children lying on the floor in corridors.

Health ministry spokesman Waheed Majroh told AFP that the toll “now stands at 95 dead, 158 wounded”, shortly after the interior ministry warned that an earlier death toll of 63 could rise.

The blast happened in an area where several high-profile organisations, including the European Union, have offices. Members of the EU delegation in Kabul were in their “safe room” and there were no casualties, an official told AFP.

The force of the explosion shook windows of buildings at least two kilometres (more than a mile) away and caused some low-rise structures in the immediate vicinity to collapse.

The suicide bomber passed through at least one checkpoint in the ambulance, saying he was taking a patient to Jamuriate hospital, an interior ministry spokesman told AFP. 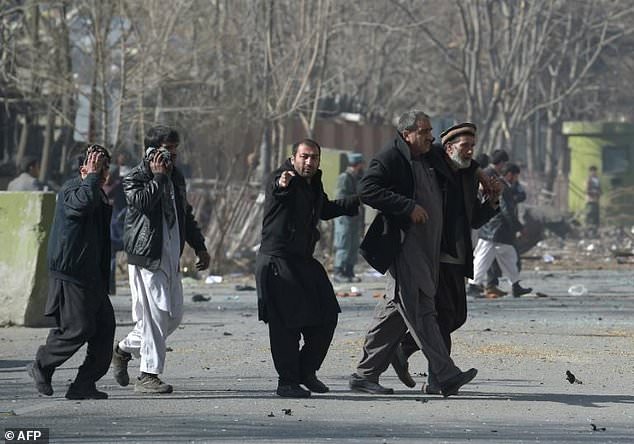 “At the second checkpoint he was recognised and blew his explosive-laden car,” Nasrat Rahimi said.

Rahimi told a news conference that most of the victims were civilians. He said the Taliban-affiliated Haqqani Network was responsible and four suspects had been arrested.

Twenty minutes before the blast an AFP reporter saw police checking ambulances several hundred metres from the scene of the explosion, as the drivers and patients stood on the street. Ambulances are rarely checked in the city.

The International Committee of the Red Cross in Afghanistan condemned the use of an ambulance in the bombing, saying on Twitter it was “unacceptable and unjustifiable”.

President Trump also condemned the “despicable” attack, vowing that “the Taliban’s cruelty will not prevail.”

“This murderous attack renews our resolve and that of our Afghan partners,” he said in a statement. 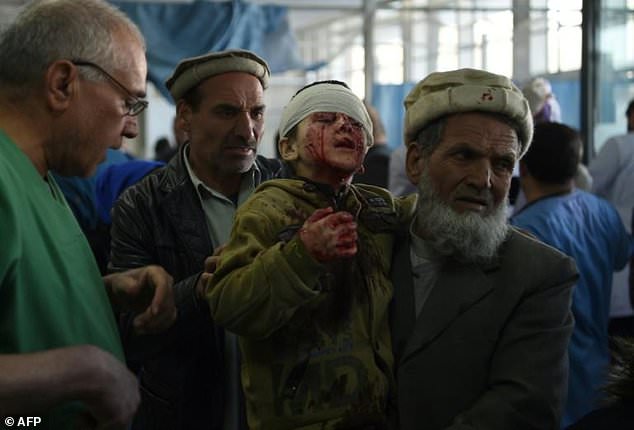 A man carries a wounded child at Jamhuriat Hospital in Kabul on January 27, 2018 after an ambulance packed with explosives blew up near the old Interior Ministry building

“Now, all countries should take decisive action against the Taliban and the terrorist infrastructure that supports them.”

The Taliban used social media to claim responsibility for the attack, which comes exactly a week after its insurgents stormed Kabul’s landmark Intercontinental hotel, killing at least 25 people, the majority foreigners.

Photos shared on social media purportedly of the blast — the deadliest in Kabul since a truck bomb ripped through the city’s diplomatic quarter on May 31, killing 150 people and wounding hundreds — showed a huge plume of smoke rising into the sky.

Near the blast site civilians walked through debris-covered streets carrying wounded on their backs as others loaded several bodies at a time into ambulances and private cars to take them to medical facilities around the city.

The Italian NGO Emergency said 131 wounded had been taken to its hospital, with its coordinator Dejan Panic tweeting that it had been a “massacre”.

A photo posted on Emergency’s Twitter account showed hospital staff treating injured people in an outdoor walkway next to a garden.

A man told Ariana TV he had taken his wounded brother to Jamuriate and Emergency hospitals but had been turned away.

“They are asking people with non-life threatening wounds to go to other hospitals,” he said.

Aminullah, whose stationery shop is just metres from where the explosion happened, said the force of the explosion shook the foundations of his building.

“All our windows broke. The people are in shock in our market,” he told AFP.

A man told Tolo News he was passing the area when the explosion happened.

“I heard a big bang and I fainted,” he said, outside the Emergency hospital.

“There were dozens of people who were killed and wounded. There were pools of blood.”

The attack was condemned by the presidential palace as a “crime against humanity”. There was international outcry too, with NATO, the US embassy in Kabul and British foreign minister Boris Johnson among those expressing horror at the latest attack.

The offices of the High Peace Council, charged with negotiating with the Taliban which has been waging a more than 16-year insurgency in the war-torn country, are also near the blast site. It was unclear whether any council members were caught up in the attack.

A security alert issued on Saturday morning had warned that the Islamic State group was planning “to conduct aggressive attacks” on supermarkets, shops and hotels frequented by foreigners.