Ambulance delays are leaving heart attack patients waiting up to three hours for life-saving procedures, an investigation has found.

The long waits are risking the lives and recoveries of those suffering the most serious type of heart attack, said an NHS watchdog.

The Healthcare Safety Investigation Branch (HSIB) found around one in ten patients were having to wait three hours to have lifesaving treatment – which involves inserting stents into arteries to relieve blockages.

Some patients are being sent paramedic cars in the place of an ambulance, further delaying their transfer to hospital.

The long waits are risking the lives and recoveries of those suffering the most serious type of heart attack, said an NHS watchdog

The HSIB examined responses to the most serious form of heart attack known as ST-elevated myocardial infarction, or STEMI, which affects about 31,000 people every year.

It followed a complaint made by a man and his family over delays in transferring him to hospital after a STEMI.

The NHS recommends such patients have a procedure called a primary percutaneous coronary intervention, or PPCI, preferably within 1.5 hours of diagnosis. This is also called an angioplasty and involves the insertion of a mesh tube – a stent – to widen a clogged artery and improve blood supply.

Timely treatment can avoid further damage to the heart, giving patients the best chance of both living and making a good recovery. However, the HSIB said ‘there has been a decreasing ability for ambulance services to ensure that patients are transferred to a PPCI centre and undergo PPCI within timescales set out in national guidance’.

A report into myocardial infarction care last year found that the average time between the 999 call and procedure in England has increased annually from 117 minutes in 2015/16 to 125 minutes in 2018/19. 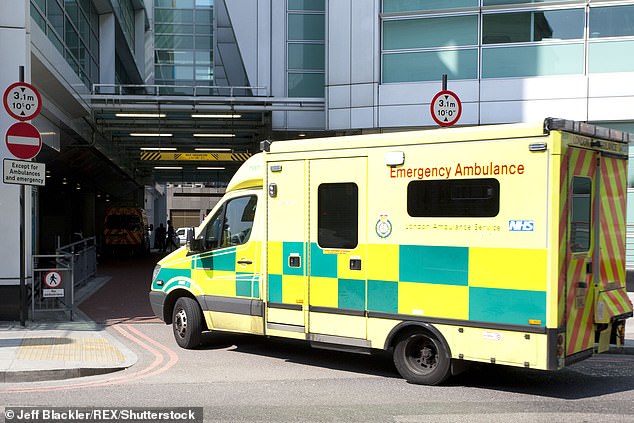 While there are suggestions of improvements leading up to February last year, patients still waited an average of 132 minutes, with one in ten cases averaging at least 179 minutes.

Officials examined in detail the case of a patient – known only as Phil – who was 61. A friend’s 999 call was listed as Category 2, which means an ambulance should arrive within 18 minutes.

But a rapid response vehicle, with a solo paramedic, arrived instead after 67 minutes. The paramedic knew he could not take Phil to hospital and made several calls for an ambulance.

It arrived 130 minutes after the 999 call and a PPCI was carried out just under four hours later. Phil survived, though he needs continuing treatment and is less active.

The HSIB has made recommendations to NHS England and the Association of Ambulance Chief Executives to reduce the delays.

Dr Stephen Drage of HSIB, said: ‘Delays in emergency response to STEMI and the impact this could have on treatment is a patient safety issue seen across England. Data cited in our report suggests that the longer the delay, the poorer the outcome could be.’

An NHS spokesperson said: ‘Ambulance services will review these recommendations building on the Fast and effective services they deliver which includes providing resuscitation on scene and preparing the patient for their procedure once they have arrived at hospital which regularly save lives of cardiac arrest sufferers.

‘Paramedics and other ambulance and NHS staff have also developed other initiatives which help more people get immediate care, including through rollout of a national network of community first responders and defibrillators which will also enhance response times for out of hospital cardiac arrest.’