The US is one of the worst countries in the world to raise a family, while Britain also scores badly, according to new research.

America was ranked 34 out of 35 in a comparison of the world’s biggest economies, scoring three ‘F’ grades for safety, cost of living and work-life balance, a ‘D minus’ for health, and a ‘C+’ for happiness and education.

Overall, it was given an ‘F’ grade for raising a family, with only Mexico coming out worse.

The US is one of the worst countries in the world to raise a family, while Britain also scores badly, according to new research 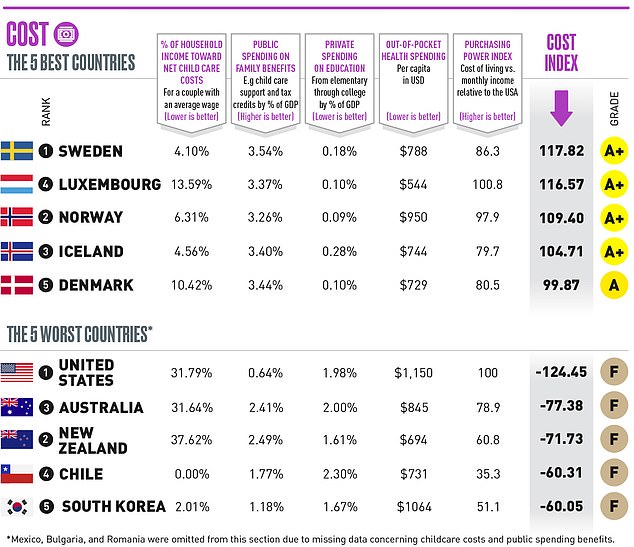 Of the 35 countries included in the research, the United States was ranked bottom for cost of living 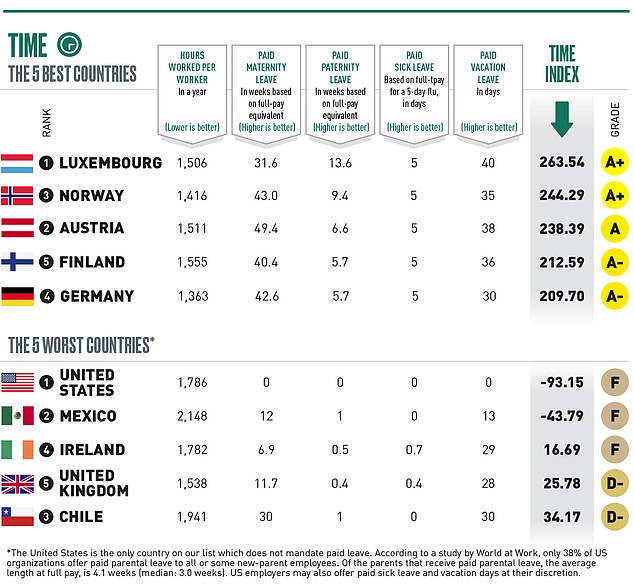 America also came bottom of the pile in terms of time spent with children, with the UK also ranking poorly

The ‘Raising a Family Index’ was compiled from 30 studies of countries in the Organisation for Economic Co-Operation and Development (OECD) which are advanced democracies with wealthy economies.

Britain, meanwhile, was given a ‘B minus’ rating, ranking it 23rd, with scores including a ‘D minus’ for work-life balance and an ‘F’ for cost of living.

It scored average for health (C) and education (C+) but better for happiness (A) and safety (B).

Iceland came out top of the table and Scandanavia did well with Norway, Sweden and Finland in the top 5 and all scoring A+.

Mexico finished bottom with a clean sweep of ‘F’ in every category, and Chile, Turkey and Bulgaria were the other countries in the bottom five.

The list was compiled by travel and family experts ‘Asher and Lyric’ who said of America’s bottom position for the cost of bringing up a family: ‘Parents with average household income have to spend 31.79% of their income on childcare costs alone.

‘Compare that to Scandanavian countries where households only have to spend 4% to 10% of income to raise a well rounded child.

‘The top countries on this list spend over 3% of GDP on family benefits such as affordable childcare, while the US spends a meagre 0.64%.’

‘A typical full-time employee in the US will receive 10 days paid vacation a year, while most other countries get approximately 30 days a year’. 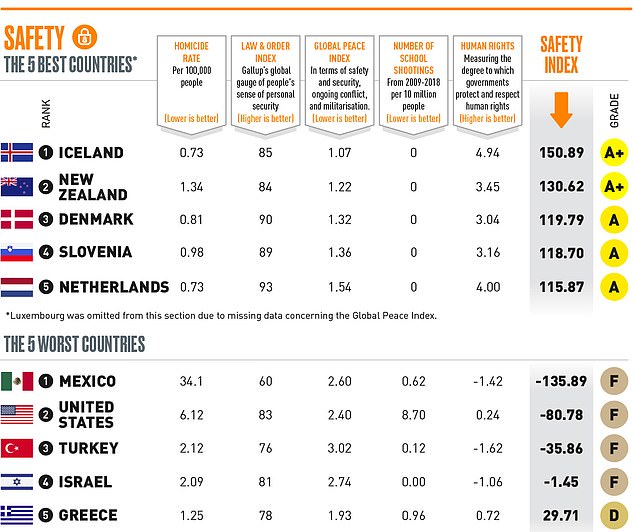 Mexico was ranked worst for safety in the index, with the US just behind, while Iceland was ranked best 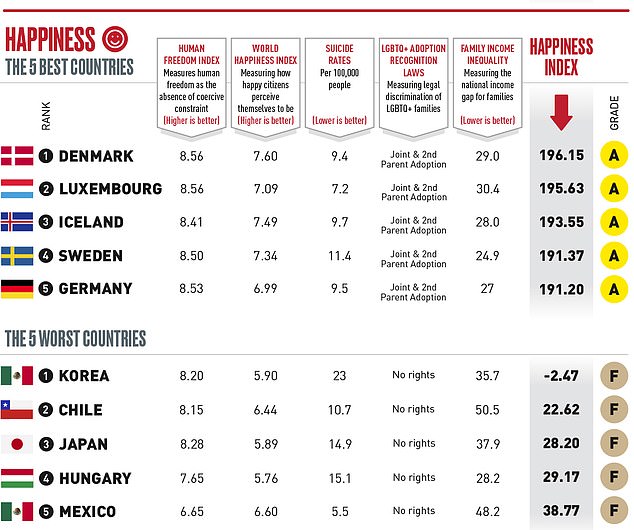 Denmark and Luxembourg are the best countries in the world for happiness, according to the index 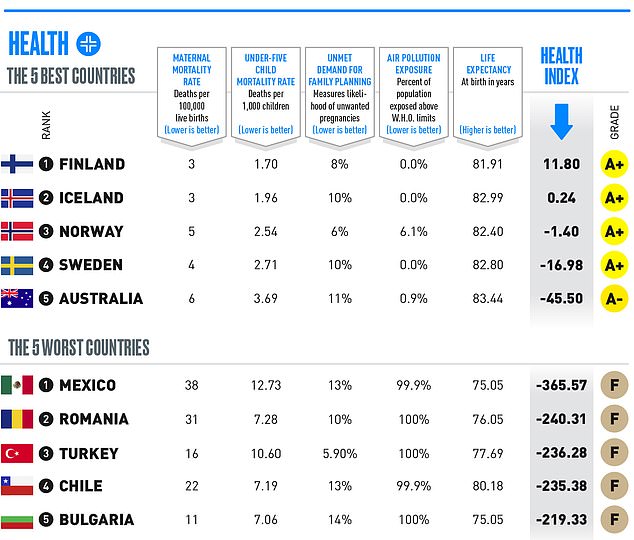 Mexico is the worst of the 35 countries ranked for health, while Finland is deemed the best 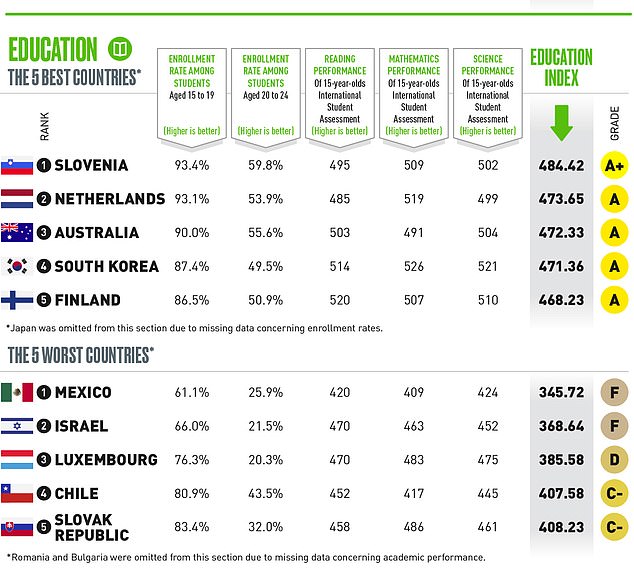 On education, Mexico again comes out bottom, while Slovenia, closely followed by the Netherlands, are on top

On education the US ranked 12 worst overall and 6th worst for mathematics.

Mexico came out as the worst for safety, education and happiness in a country where the top 20% of the country earns ten times as much as the bottom 20%.

Talking about the country’s poor safety record Asher and Lyric said: ‘Although many parts of Mexico are relatively safe, especially tourist destinations, there is also widespread violence and corruption that affects many of its citizens.

‘Mexico’s homicide rate has increased every year since 2014 and recent statistics show there are 34.1 homicides per 100,000 people, by far the most on the list.’

In comparison Iceland has only had 37 murders in the past 20 years and one school shooting in the past ten.

Talking about Denmark’s position at the top of the happiness table, the researchers attributed this to ‘supporting the basic needs of its people, naturally keeping stress levels low and ease of life high.’

Lyric, who is an American mother of two young children, concluded: ‘I think if we, as Americans, are truly honest with ourselves, we might understand why the United States ranks solidly as the second-worst country to raise a family.

‘My aspiration is that something will substantially change in my children’s lifetime. There are things I love about this country, I hope we can all rise to the occasion’.