The unusually mild winter has given way to unseasonably cold weather in the spring as temperatures in some parts of the country fall as much as 30 degrees below normal and snow is even forecast for the Rockies, Great Plains, and the Upper Midwest.

Meanwhile, the Deep South is gearing up for violent storms that are likely to pack gale-force winds, heavy rains, and tennis ball-sized hail.

The weather forecast for Easter weekend calls for chillier than normal temperatures for this time of year.

Americans who do not live on the West Coast or in South Florida are going to need to bundle up if they do venture outside – even though some 95 per cent of the country is on lockdown due to the coronavirus pandemic.

Residents of Montana, Wyoming, and northeastern Colorado can expect a snowy Saturday.

A wild foal drink her mother’s milk as the two graze in the snow outside the mountain community of Cold Creek, Nevada, on Friday 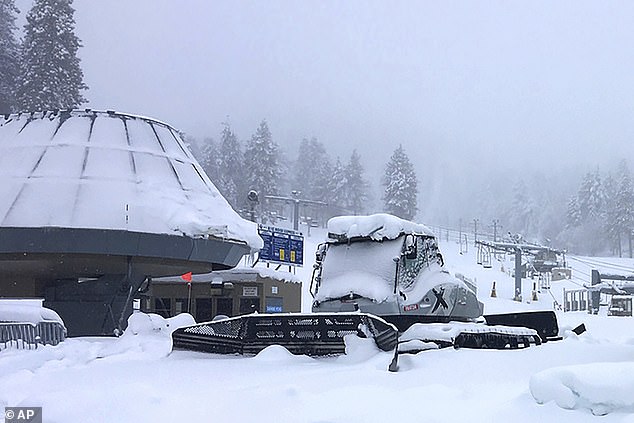 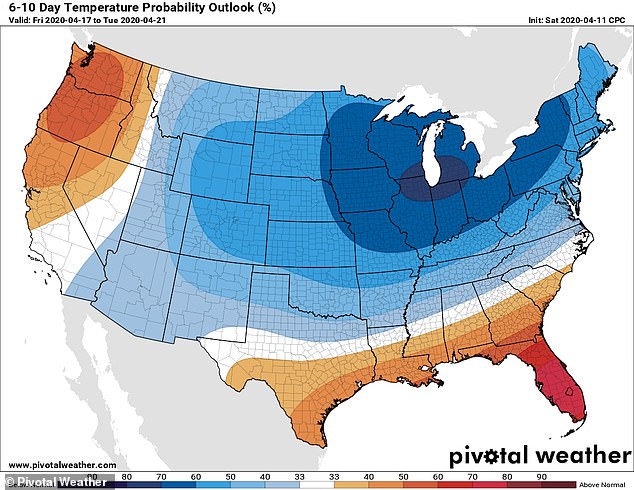 Denver is likely to see two inches of snow over the weekend – perhaps as much as 10 inches.

According to The Weather Channel, the storm is then expected to move eastward, hitting northern Wisconsin, parts of Minnesota, and Michigan’s Upper Peninsula.

Minneapolis is likely to see between 1 to 3 inches of snow on Sunday.

The Texas and Oklahoma panhandles are also expected to see some snow this weekend.

Temperature across a wide swath of the northern half of the country will be noticeably cooler over the holiday weekend.

Casper, Wyoming, is forecast to see temperatures ranging from 24 to 30 degrees.

Billings, Montana, is due for a high of just 28 degrees on Easter Sunday and 32 degrees on Monday.

The forecast calls for high temperatures of 45 degrees on Easter Sunday and 41 degrees on Monday in Omaha, Nebraska.

The low temperatures for early next weekend are expected to be downright frigid. Bismarck, North Dakota, is expected to see a low of just 18 degrees on Tuesday. 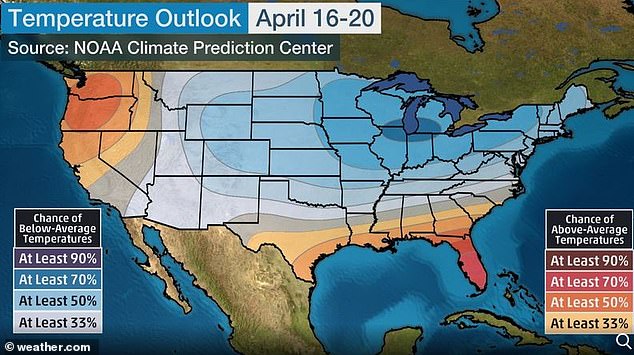 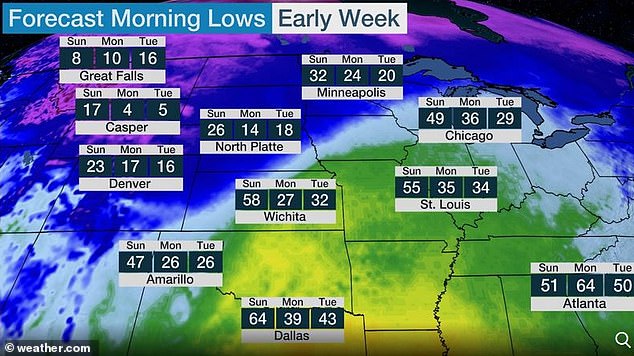 Low temperatures are likely to reach the single digits in Wyoming, Idaho, and parts of the Dakotas 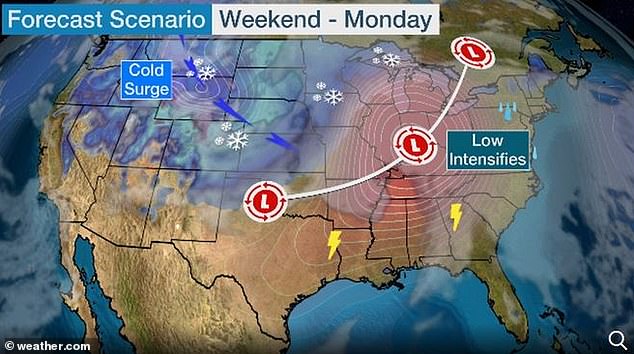 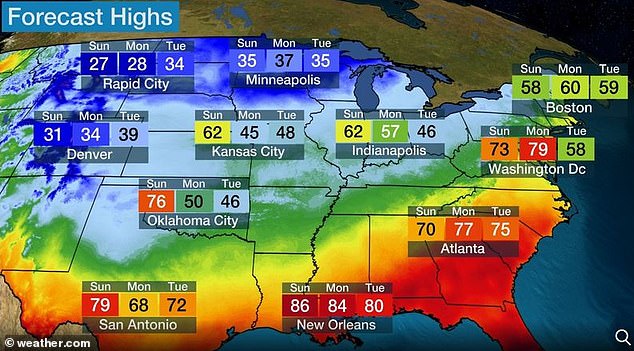 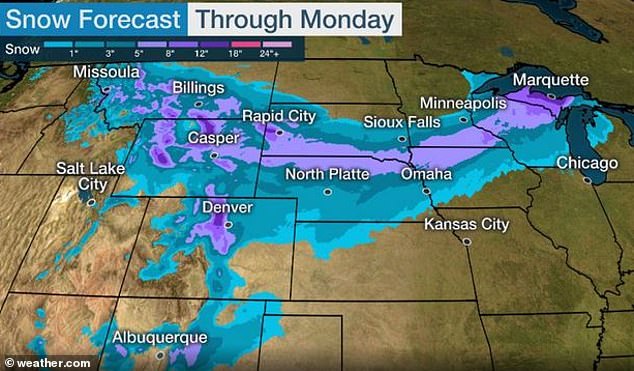 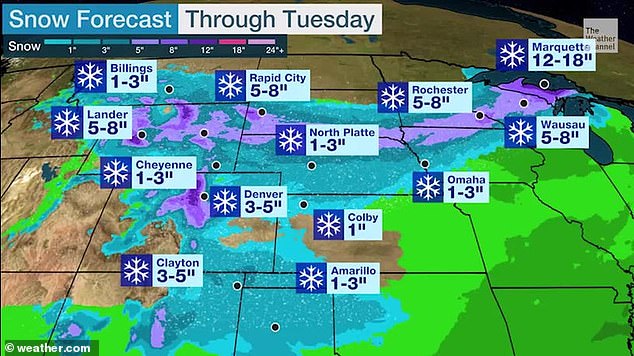 Parts of Wyoming, South Dakota, Minnesota, and Wisconsin could see as much as 8 inches of snow 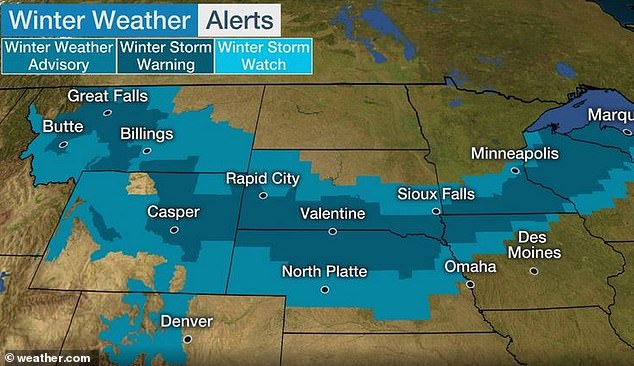 Winter weather warnings and advisories will be in effect over the course of the weekend in Wisconsin, Minnesota, Iowa, South Dakota, Wyoming, and Idaho

Rapid City, South Dakota, is forecast to see temperatures dip to a low of 12 degrees on Monday and Tuesday.

Low temperatures are also likely to hover in the 30s for the Great Lakes region, including Cleveland, Buffalo, Chicago, and Detroit.

Under normal conditions, Americans would likely be encouraged to travel to areas that are seeing higher than usual temperatures for this time of year.

That includes the Pacific Northwest, Northern California, and South Florida.

Residents of Seattle, a city that sees rain most of the year, can only look out the window at clear, sunny skies while temperatures soar into the mid-60s.

The forecast also calls for beautiful weather in the San Francisco Bay area, where temperatures are expected to reach the mid-to-high 60s.

In Miami, it will feel like summer, as temperatures stay in the mid-to-high 80s throughout the week.

Meanwhile, the threat of strong tornadoes and other damaging weather on Easter posed a double-edged safety dilemma for Deep South communities deciding how to protect residents during the coronavirus pandemic.

An outbreak of severe thunderstorms was likely Sunday from Louisiana through the Tennessee Valley, the National Weather Service said.

More than 4.5 million people live in the area where dangerous weather was most likely, including Birmingham and Jackson, Mississippi, the Storm Prediction Center said on its website.

The National Weather Service office in Jackson told residents to brace for the possibility of long-lasting tornadoes, wind gusts up to 70 mph and tennis ball-size hail through Sunday evening. 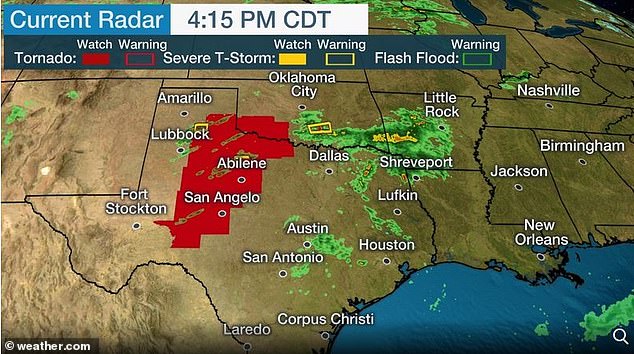 Tornado warnings were in effect on Saturday for areas of central Texas, including the San Angelo and Abilene regions 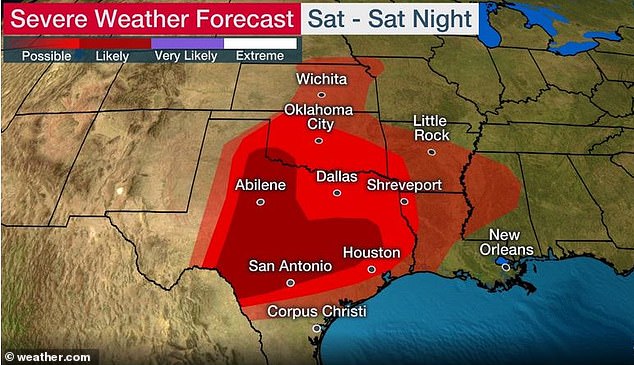 Severe weather was forecast on Saturday for large swaths of Kansas, Oklahoma, Texas, Arkansas, and Louisiana 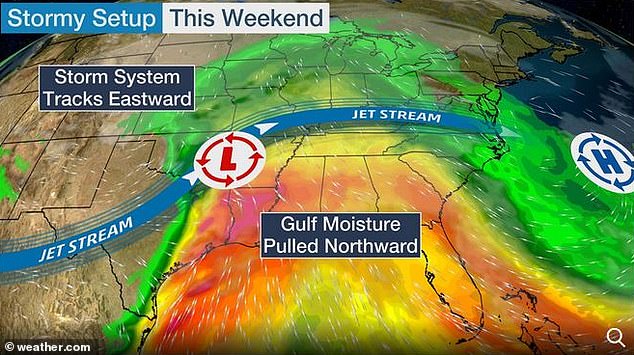 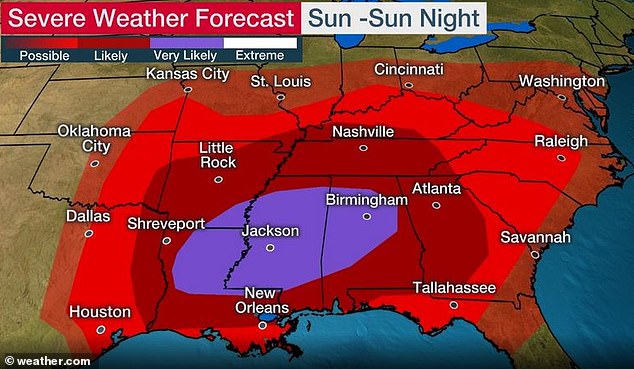 On Easter Sunday, severe weather is forecast for much of the Deep South and the Ohio and Tennessee Valleys 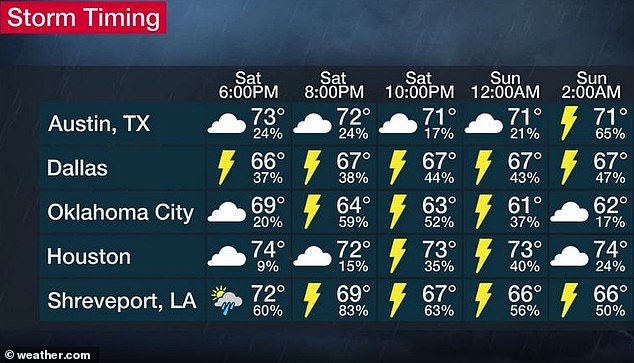 Stormy weather is in the forecast for this weekend in Texas, Oklahoma, and Louisiana

Waves of storms with occasional lulls could continue into early Monday, with as much as 3 inches of rain possible.

‘This could be one of our bigger events we’ve had in a long time around here. Take this seriously,’ weather service forecaster Gary Goggins said in a public briefing broadcast on Facebook live from the agency’s Birmingham-area office on Saturday.

Seeking protection from violent weather during the coronavirus pandemic could present a challenge for some.

With many churches having ended traditional, indoor services because of the viral outbreak, congregations planned to hold online services or drive-in worship where people sit in vehicles, which are a bad place to be during a tornado.

Some churches announced they were moving up Easter drive-in service to Saturday afternoon because of the threat.

Although forecasters and the Alabama Department of Public Health advised people to seek protection in public storm shelters if faced with the possibility of twisters, some communities, citing COVID-19, said they would not open shelters on Sunday.

In a video message posted on the town’s Facebook page, Alexander City Mayor Thomas Spraggins said residents of the central Alabama town needed to find a safe place on their own since public buildings wouldn’t be open as shelters because of the coronavirus.

‘I’ll be praying for everyone to have a safe and happy Easter,’ he said.

The decision against opening shelters was at odds with a message from Gov. Kay Ivey. 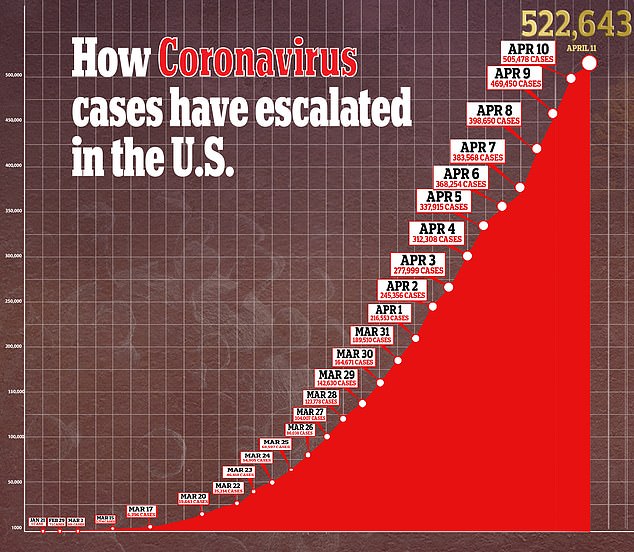 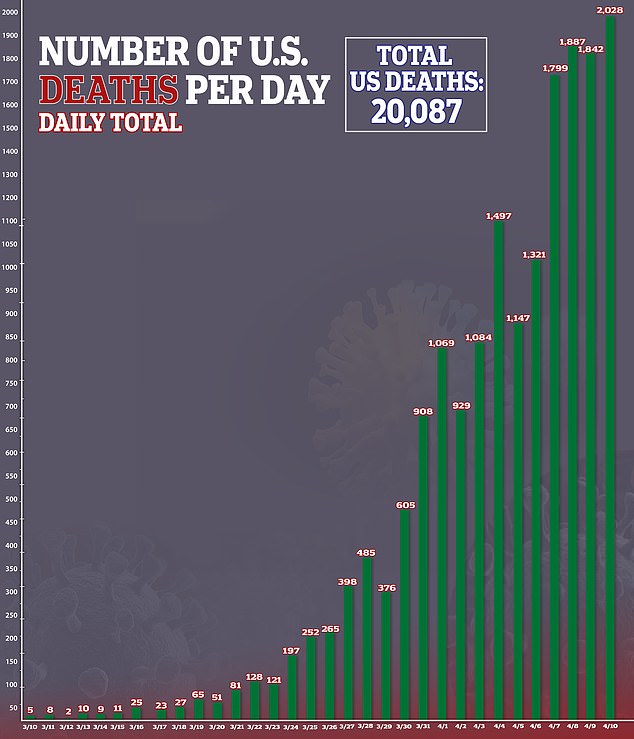 ‘Both the National Weather Service and the State Public Health Department remind Alabamians that the use of shelters and other resources take precedent, should the need arise,’ Ivey said in a statement Saturday.

It encouraged residents entering one to wear masks, use hand sanitizer and stay 6 feet apart.

Strong storms earlier in the week caused damage in the Midwest.