American Airlines revenue will be down 90% in second quarter

By Emily Crane For Dailymail.com and Reuters

American Airlines expects its revenue to be down 90 percent in the second quarter compared to last year but predicts it will halt cash burn by year end – as foot traffic through airports starts to increase after COVID-19 effectively brought travel to a standstill.

The company said on Friday that it expects its fiscal 2020 results to be materially impacted given the duration and severity of the coronavirus pandemic remains uncertain.

‘Due to the recent decline in demand caused by the COVID-19 pandemic, the company expects its second quarter 2020 revenue to be down approximately 90 percent versus the second quarter of 2019,’ the company said in a filing with the US Securities and Exchange Commission.

The airline added that is expects total system capacity to be down about 75 percent compared to the last year’s second quarter.

The company, however, said it expects to halt its daily cash burn by the end of this year thanks to cost-cutting measures and a modest recovery in travel demand.

Airlines across the country were collectively bleeding about $10 billion a month as the pandemic prompted more passengers to cancel their flights and seek refunds rather than book new travel.

‘The company has recently experienced improving demand conditions and has passed the peak in cash refund activity,’ the company said in Friday’s filing.

In April, restrictions aimed at curbing the spread of coronavirus caused air travel to plummet to levels not seen since the 1950s.

Some days, fewer than 100,000 people passed through US airport security checkpoints.

The numbers have grown steadily since then and TSA data shows that just over 500,000 people traveled through security checkpoints on Thursday.

It is still down considerably from the 2.7 million people who passed through checkpoints on the same day last year. 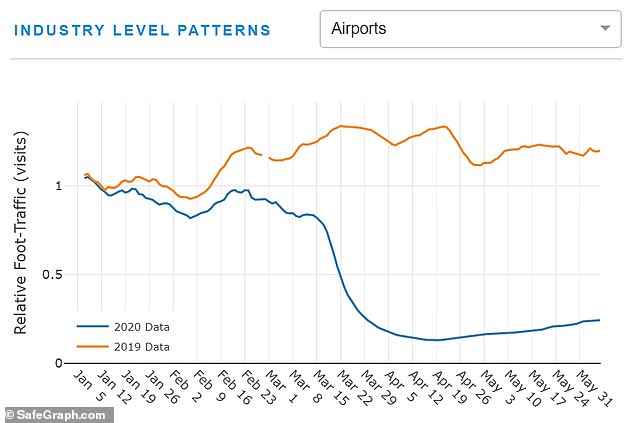 Cellphone data, compiled by SafeGraph, shows that foot traffic through airports has only slightly increased in recent weeks following a sharp decline in mid-March. The data shows foot traffic is well below where it was this time last year

Airline executives have previously warned that demand may not recover to 2019 levels for several years.

Cellphone data, compiled by SafeGraph, shows that foot traffic through airports has only slightly increased in recent weeks following a sharp decline in mid-March.

The data shows foot traffic is well below where it was this time last year.

It comes as American Airlines this week said it will aggressively add back flights in July – a bet that the slow recovery in air travel will gain speed this summer as states re-open their economies.

American said it plans to operate 55 percent of the US flights that it ran in July 2019, a huge increase over the 20 percent schedules it ran in April and May.

The airline is more guarded about demand for foreign travel – it plans to operate just 20 percent of the international flights that it ran last July. 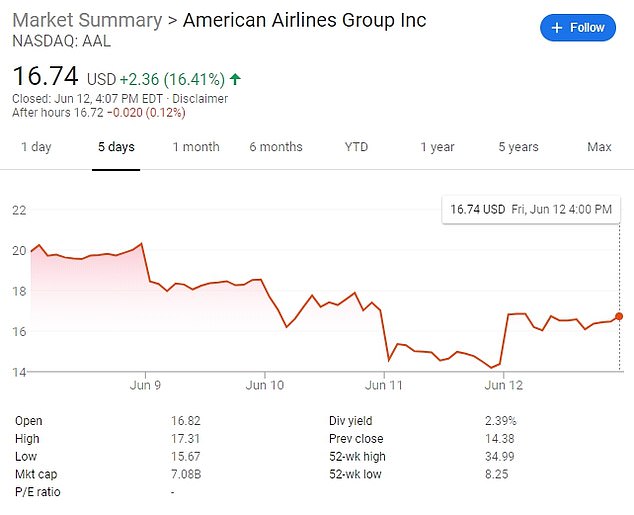 The company’s stock, which had underperformed peers among concerns about the company’s heavy debt load, jumped following the announcement American plans to aggressively add back flights in July

American could still cancel many July flights right up until departure time if hoped-for bookings fall through.

The company’s stock, which had under-performed peers among concerns about the company’s heavy debt load, jumped following the announcement.

Back in April during the peak of the pandemic, American posted a $2.2 billion net loss, its first quarterly loss since emerging from bankruptcy in 2013.

It also warned of a roughly $70 million per day cash burn in the second quarter.

This week, American said its daily cash burn rate was expected to slow to about $40 million this month.

The airline is receiving $5.8 billion in government payroll aid, which bars airlines from cutting pay or jobs through September 30.

It is part of a federal rescue package to ensure that airline workers have jobs as the industry battles its biggest ever crisis.