‘There’s one thing that blows every terrifying animal out of the water’: American expat reveals the ‘most deadliest’ thing she discovered in Australia – and it’s not snakes or sharks

An American expat living in Australia has offered her amusing explanation about why she’s convinced roundabouts are ‘deadliest’ thing she discovered Down Under.

Meghan Maire who moved from Houston, Texas, to regional New South Wales shared a TikTok video warning foreigners who are planning to hit the road around the country to be on high alert when approaching roundabouts.

‘Americans, we’ve always heard about the deadly, dangerous, killer animals that live in Australia. Sharks, crocodiles, box jellyfish, snakes, spiders and territorial kangaroos… But be warned,’ she said in her video.

‘There’s one thing that blows all of these terrifying things out of the water. There’s no way to prepare for it. There’s no way you’ll ever learn how to get through it alive. The only thing saving you is dumb, blind luck.

‘What is this nightmare to which I’m referring to? This s*** – roundabouts.’ 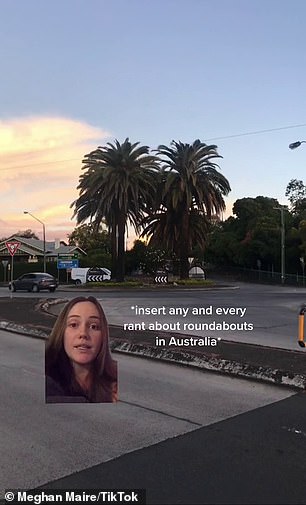 The young traveller explained why she found the whole experience of driving around a roundabout stressful.

‘No one can see where anybody is going. You can’t see across the damn thing because they fill it with trees, monument or signs,’ she said.

‘No one uses their indicators and worst of all, I mean the absolute kicker… we’re driving on the wrong side of the road.’

Her video has since been viewed more than 19,000 times, with many Aussies agreeing with her statement.

‘Yep, I’m Aussie and the big ones in the city can be freaky,’ one woman wrote.

Another Aussie driver urged everyone to avoid the notorious Britannia roundabout in Adelaide, South Australia, which has been widely considered as one the nation’s most dangerous roundabouts.

‘Please do not attempt Britannia roundabouts. Lived here my whole life and used to use it daily. But literally no one knows how to master it,’ she said. 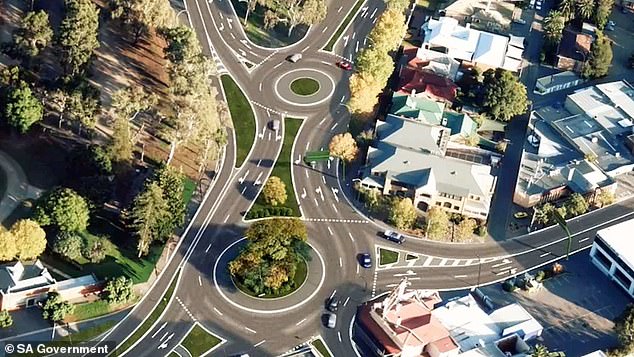 Another driver urged everyone to avoid the notorious Britannia roundabout in Adelaide, South Australia (pictured), which has been widely considered as one the nation’s most dangerous roundabouts

Others insisted roundabouts are ‘easy’ and you just need to ‘give way’ to traffic on the driver’s right side, or cars that are already on the roundabout.

‘First one there wins. Easy! If you both get there at the same time, the person to your right goes first, not rocket science,’ one suggested, while another said: ‘Give way to the right. That’s all you need to know.’

And one added: ‘You don’t need to see across them… Just any traffic approaching from your right.’

Meanwhile, one person joked: ‘Just do what we do at roundabouts: close your eyes, hope for the best and floor it.’

According to a 2014 study by Austroads, Australian roundabouts are among the most dangerous in the Western world because they are designed for speed, not safety.

The report found the design of Australian roundabouts encouraged drivers to speed through intersections and to ‘look but not see’ other motorists.

THE WEATHER: The sun in Australia is strong. I didn’t respect this at all when I arrived. I neglected to buy decent sunscreen and paid the price with bad sunburn. My skin blistered and peeled off for weeks afterwards. The sun is deadly in Australia, take precautions or you’ll end up redder than a lobster!

AUSTRALIANS SWEAR A LOT: I didn’t realise this until I went round to the house where the girl I was seeing at the time lived. Two of her housemates were Australian and were not shy of blurting expletives out at every opportunity. The use of one word, in particular, struck me. They would call me a ‘good c**t.’ I would never dream of using this word in England. Never mind, as a form of praise for somebody.

BEER SIZES: In England, when you ask for a beer you get a pint. In Australia, you don’t get pints, you get a schooner, which is 3/4 of a pint. Then, if you’re in a state such as Victoria, you might get a pot, which is more or less a 1/2 pint. The worst part about this? The smaller sizes cost more than a pint back in England.

COFFEE: Coffee in Australia is so much better than any of the rubbish they drink in America that it’s almost sad.