Maddie, 20, from Iowa, and Caleb, 18, from Georgia, were the last two finalists.

Gabby Barrett, an 18-year-old from Pennsylvania finished in third place after being eliminated earlier in the episode.

Season finale: Maddie Poppe and new boyfriend Caleb Lee Hutchinson waited to learn if they would be named as the winner of American Idol on Monday on ABC

Maddie and Caleb announced that they’ve been dating near the end of the show – a two-hour finale that followed over 200,000 auditions and a nationwide vote.

The happy couple did one performance together, a duet of Over The Rainbow that had Ryan Seacrest in tears.

They were given a vacation in Hawaii for making it to the final two.

Maddie then sang her new single Going, Going, Gone to close the show. 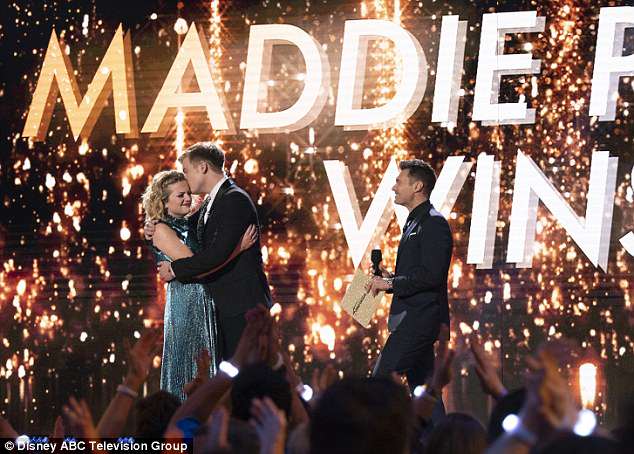 The winner: The two-hour finale concluded with Maddie being named the winner Idol judge Lionel Richie opened the night with a performance of his 1983 hit All Night Long.

Katy Perry was sorry to see all the contestants go.

‘My babies are leaving the nest!’ exclaimed the 33-year-old pop star. 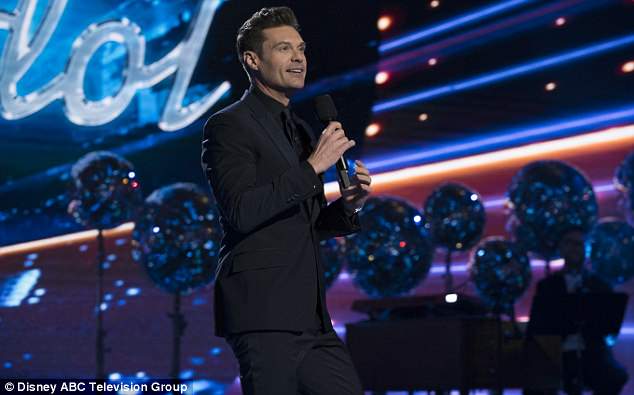 Lionel, a 68-year-old funk/soul/R&B legend, was given an apron saying ‘Hello is it me you’re cooking for?’ as a gift. She’s back: Jurnee returned after being eliminated earlier during the season and performed with Nick Jonas ‘I’ve been such a big fan of what she’s been doing this season,’ remarked Luke, a 41-year-old country star/Idol judge.

The new Bachelorette Becca Kufrin swung by to plug the upcoming season. 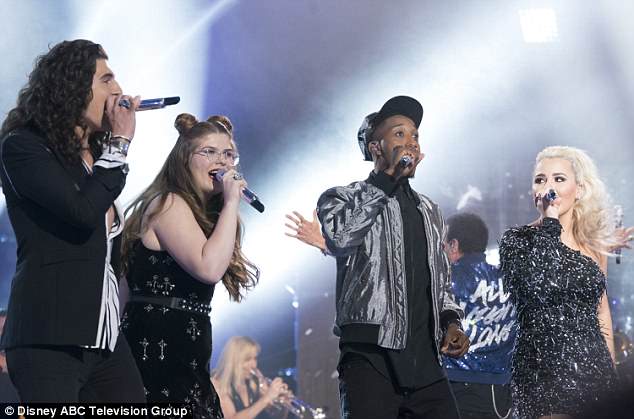 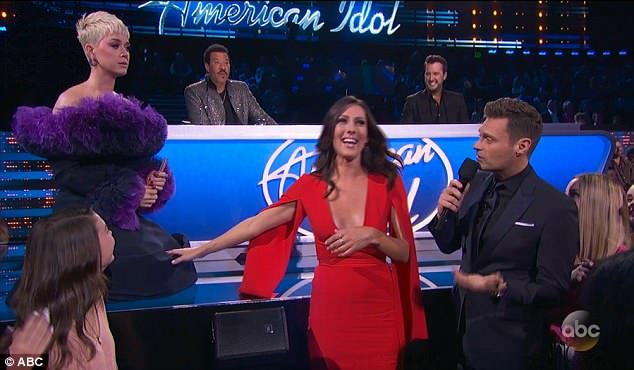 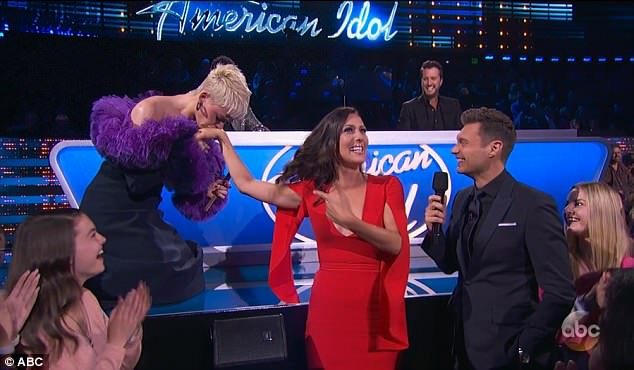 ‘Can I be in the running?’ begged Katy, before kissing Becca’s hand.

‘I’m not single but I still like you…and she has the scripture on her arm,’ she bellowed.

Katy then pretended to faint theatrically, so Luke dragged her back to the judging desk. Dragged away: Luke dragged Katy away from Becca

Maddie, returned to the stage with Kermit the Frog, which was her audition song.

Former contestant Noah Davis was given an adopted alpaca as a gift to fulfill his lifelong dream.

Caleb then hit the stage with Darius Rucker for Wagon Wheel. 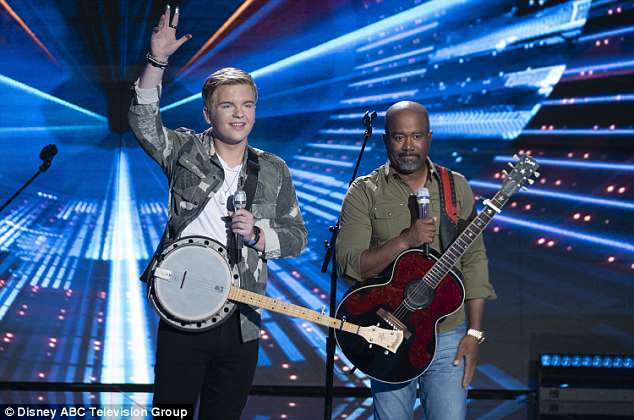 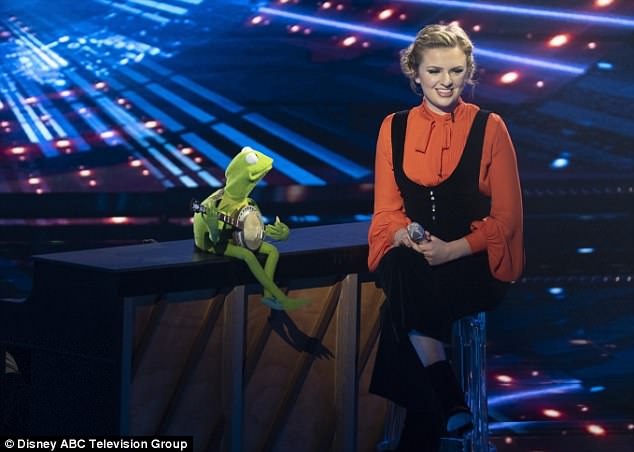 Sweet duet: Kermit The Frog joined Maddie for a duet

Jimmy Kimmel made an appearance to unveil an ‘American Idol time capsule.’

The talk show comic produced a tiny black t-shirt saying: ‘This is the black t-shirt that Simon Cowell wore for the entire first season, look at that, little nipples built into the thing.’ Lionel got a little teary near the end, saying: ‘I am so proud of these kids.’

He compared working with Katy to: ‘Raising Nicole Richie all over again.’

Pop star Bebe Rexha, 28, performed Meant To Be with Caleb, Maddie and Gabby. 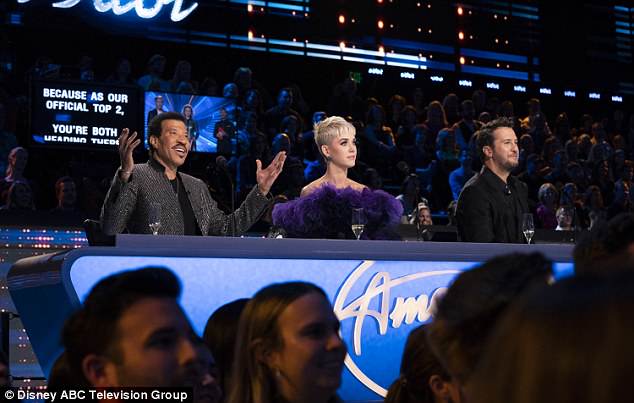 Katy then hit the stage with runner up, 17-year-old Pennsylvanian Catie Turner, for a duet of Part Of Me. 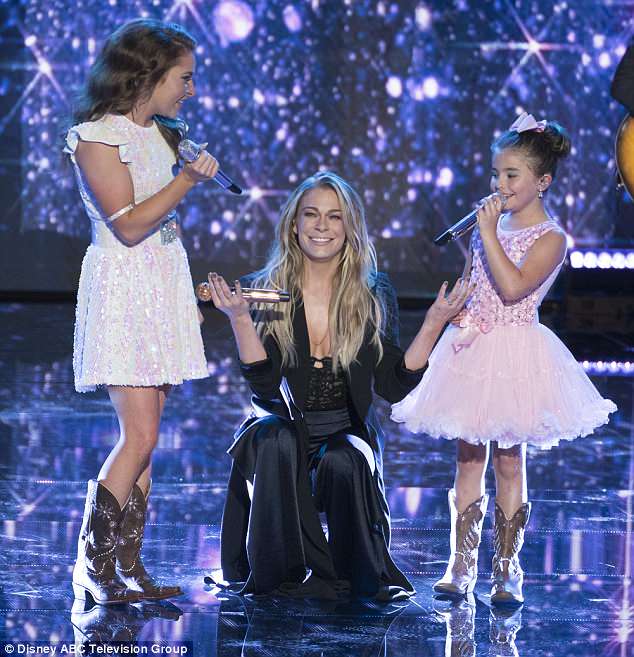 Group hug: Leann hugged the girls after performing her hit song Blue with them 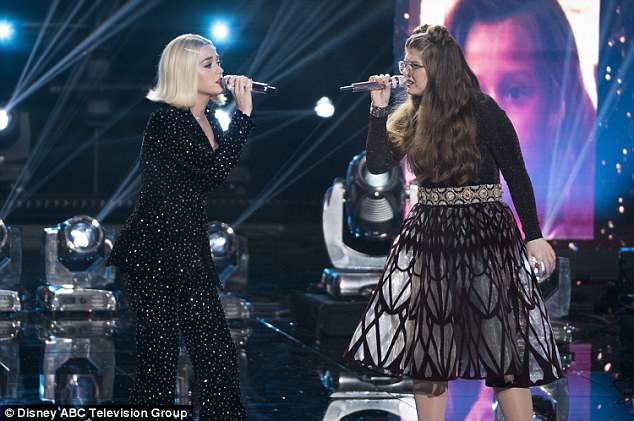 Blonde wig: Katy donned a blonde wig for her duet with Catie Turner to Part Of Me

The pop superstar wore a blonde wig for the performance, which she later ripped off.

Gospel star Yolanda Adams joined Michael J. Woodard, a 20-year-old runner up from Baltimore, for What The World Needs Now Is Love.

American Idol debuted on ABC for its 16th season after being on Fox for 15 seasons and has been renewed for another season with Lionel, Katy and Luke returning as judges. 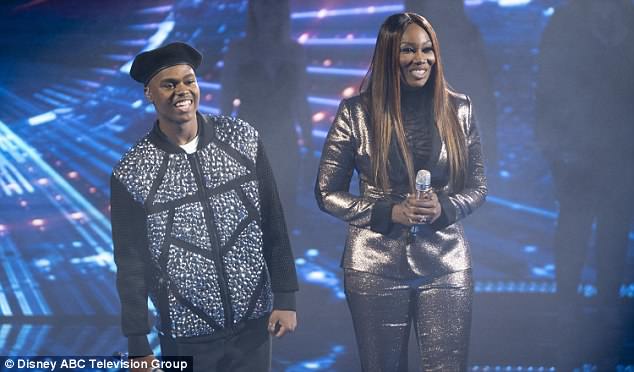 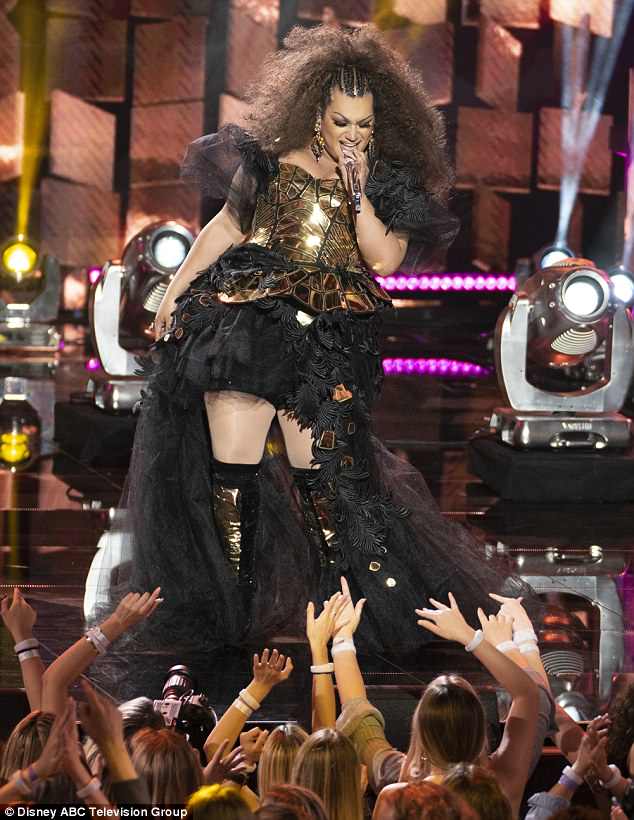