It was the worst possible time to forget the words.

As the first half of American’s top 20 performed on Sunday’s episode, Shawn Robinson, 21, left an awkward silence as he totally forgot his lyrics – ending the night of All-Star Duets as one of three going home.

Shawn was performing with Elle King, while the others helping with all-star duets included Jason Mraz, Pat Benatar, Shaggy and Brett Young.

Lyrics lapse: Shawn Robinson forgot the lyrics while performing during the All-Star Duets episode Sunday of American Idol on ABC

The hardware store assistant was immediately worried at performing Creedence Clearwater Revival’s Proud Mary, admitting of the upbeat rocker: ‘It’s not what I really do.’

Those fears only escalated when Elle, 29, made a last-minute decision to slow down the version of the song compared to what they had rehearsed.

‘Thirty minutes ago I found out that we are completely changing the tempo of our song. It’s really scary,’ he said before taking the stage.

His fears were realized when he forgot the words at a key point, leaving an awkward silence for a whole line. 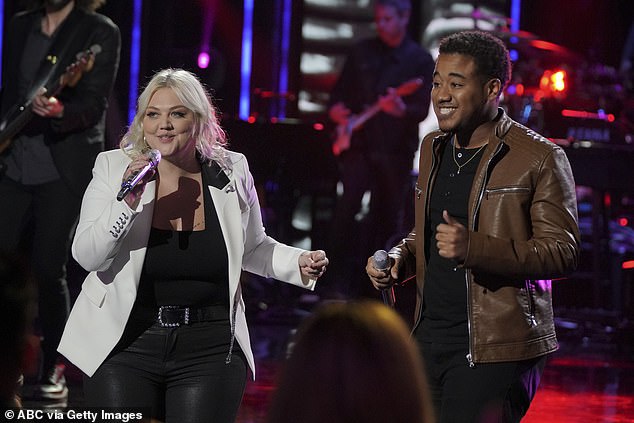 Song change: Elle King made a last-minute decision to perform a slowed down version of Creedence Clearwater Revival’s Proud Mary 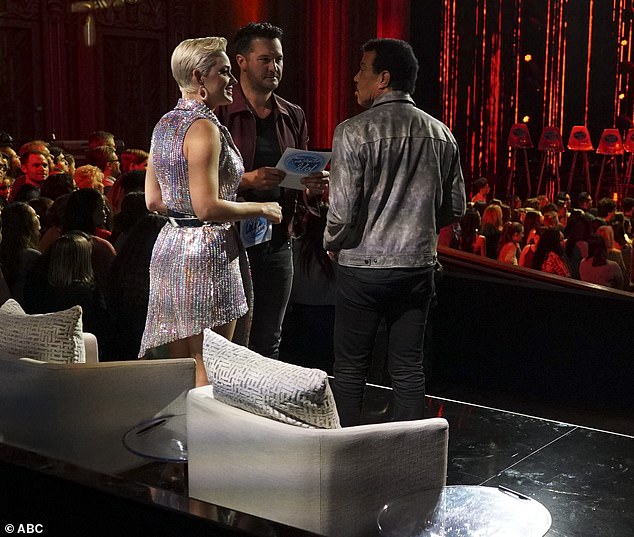 Elimination episode: Katy Perry, Luke Bryan and Lionel Richie determined which seven finalists of the 10 who performed would advance

‘That stuff happens onstage,’ Elle insisted afterward, with the judges also trying to ease his nerves.

‘I’m in the multiple mistakes a night category,’ Luke Bryan, 42 told him, while Lionel Richie, 69, insisted: ‘I love the way you recovered.’

‘That was a pro move,’ Elle told him of the way he pressed on despite the obvious mishap. ‘I’m so proud of you, man.’ 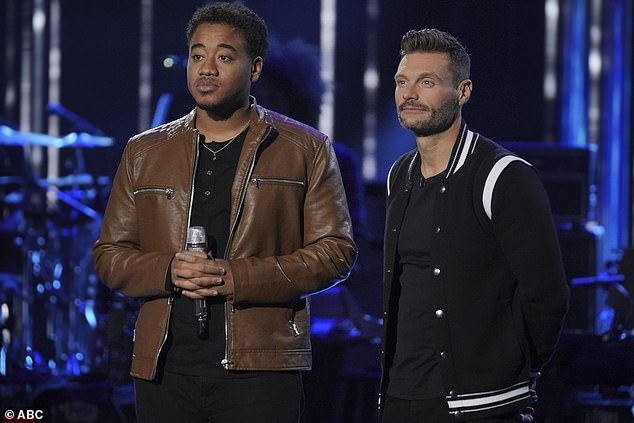 Awkward silences: Shawn after forgetting the lyrics was critiqued by the judges as host Ryan Seacrest stood next to him

Luke had insisted he should be ‘proud of what you just did,’ telling him: ‘It was a great vocal performance up there.’

‘I went up there and did my best. I had a slip-up… it’s up to the judges now,’ Shawn said before the big decision.

Shawn ended the night one of three going home, along with New York subway singer Bumbly, 27, and 23-year-old Kate Burnette. 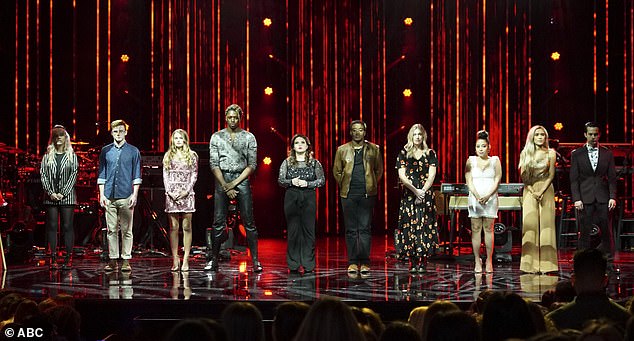 Kate’s biggest clue that she was going home was the way the judges spent almost all of their commentary gushing over her star, Pat Benatar.

‘It was wonderful to see her onstage,’ Lionel said of the legendary rocker after their performance of Heartbreaker. ‘She was standing still and giving us attitude.

‘I can’t teach that to you. You take that, put it in your memory bank and use it for the rest of your career.’ 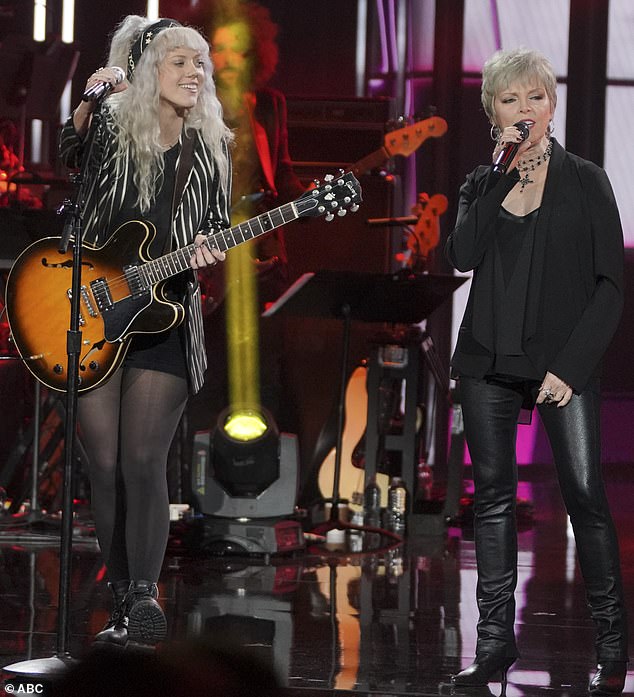 Bumbly, meanwhile, was shown in tears even before she was known to be heading home, with her star, Shaggy, hugging her and saying: ‘You were born to do this.’

They performed Shaggy’s Angel – with the star changing sections to recite her name – and he predicted beforehand: ‘I think she’ll win them over with that big smile, that bubbly personality – and that amazing voice.’

But again, a lot of the praise was for the star – real name Orville Richard Burrell – with Luke saying: ‘That’s my first Shaggy concert! If you can’t have fun up there with Shaggy then you’ve got serious problems.’ 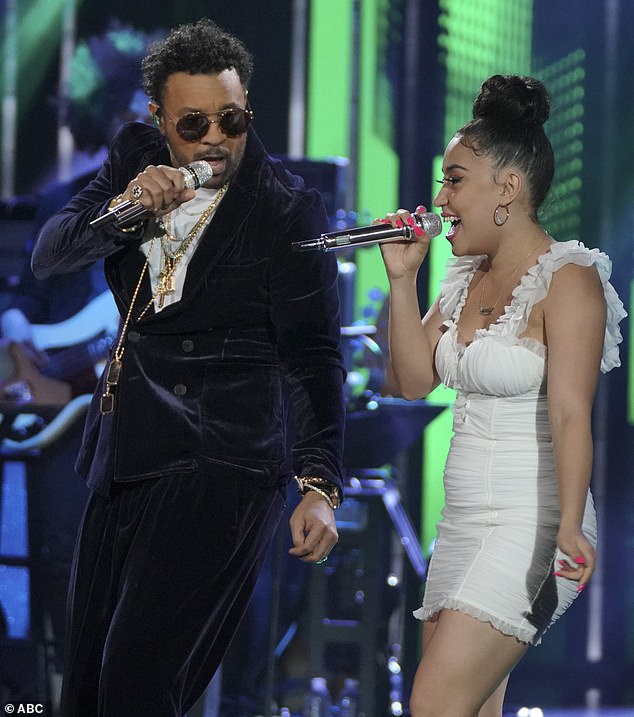 Fun song: Shaggy and Bumbly got the crowd going during their duet

Lionel had insisted the decision would be the ‘hardest thing we’ve ever done,’ and told the three heading home: ‘Use this night. God has blessed you with an amazing launch.’

Laci Kaye Booth had been the first sent through to the next round – a clear frontrunner from the night.

‘I don’t want to play favorites but … but fill in the blank,’ Katy Perry told the 34-year-old contestant, claiming it was like a performance at the Grammys. 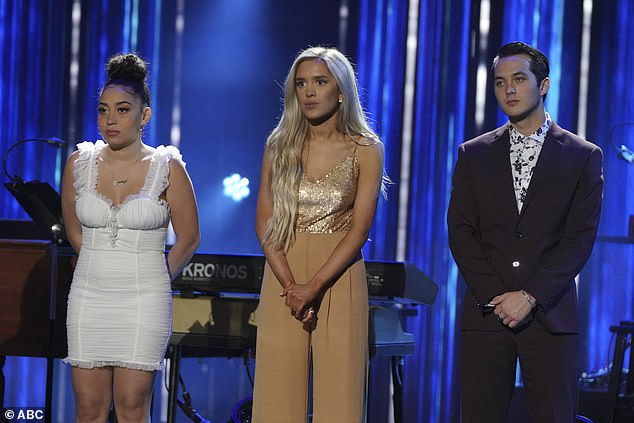 ‘I mean, from the moment you walk onstage, you sprinkle stardust everywhere,’ Katy insisted.

Laci performed Mercy with her own idol, Brett Young, telling him she was ‘a little starstruck’ and ‘obsessed’ with his music.

‘I am fangirling for sure,’ she admitted, saying after the performance: ‘I’ve been obsessed with him and his song Mercy for forever, so it was a dream.’ 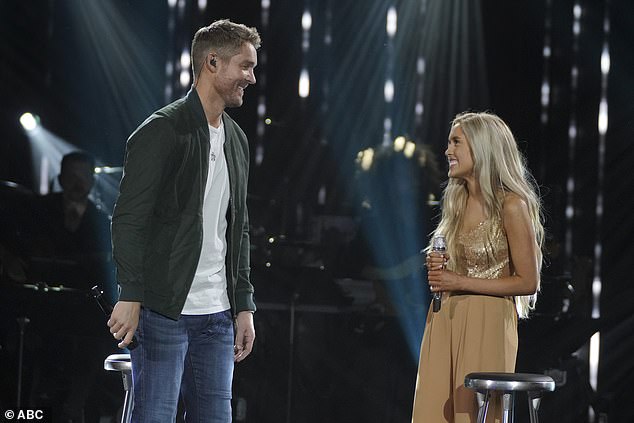 Instant chemistry: Brett Young performed with Laci and they were praised for their chemistry

Lionel called it ‘an incredible performance’ and sad the chemistry was real.

‘I actually thought I was watching a serious love affair happening up on that stage because it was delivered so well. This is gonna be big for you,’ he predicted.

‘When you sing it just hits you right in the heart,’ Luke agreed. 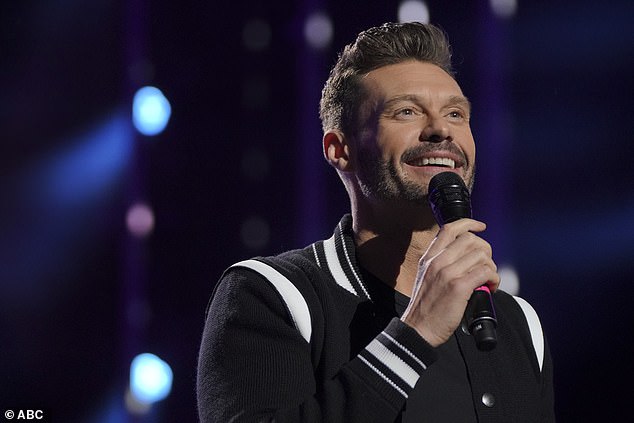 The host: Ryan Seacrest hosted the two-hour episode filmed at the Wiltern Theatre in Los Angeles

‘Especially when you sing a song about heartbreak – you make it the worst heartbreak ever. And for some reason, people love that.

‘It’s just an amazing gift you have.’

Ashley Hess, 27, was the next through having even wowed her star, Jason Mraz, with her reinterpretation of his hit I’m Yours. 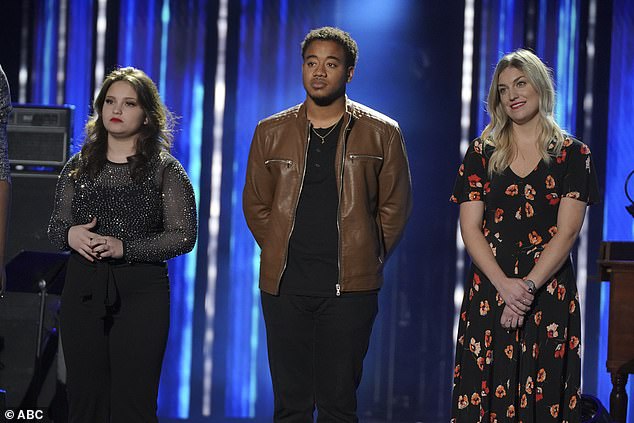 Tough decisions: Madison and Ashley advanced as Shawn was eliminated 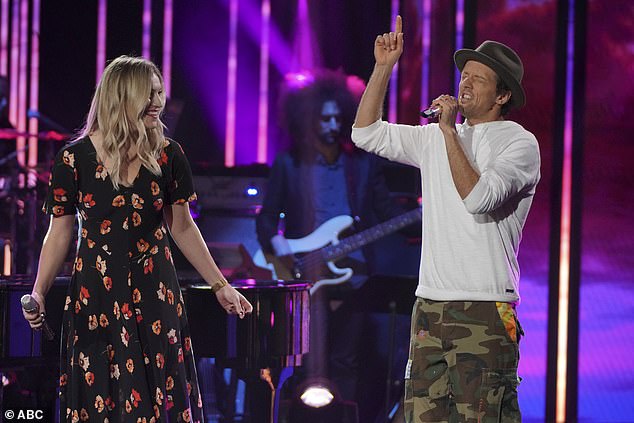 ‘I’ve only ever known it my way, which started around my favorite Bob Marley chords,’ he told her. ‘I’m thrilled to hear it reinvented. I think you’re gonna crush it.’

Katy then told her: ‘I’ve heard that song so many times, but the way that you guys opened it up and interpreted it was so fresh.’

Next through was Walker Burroughs, who proved his special connection with Jason Mraz – with film showing him playing the star’s song during his very first performance, aged nine. 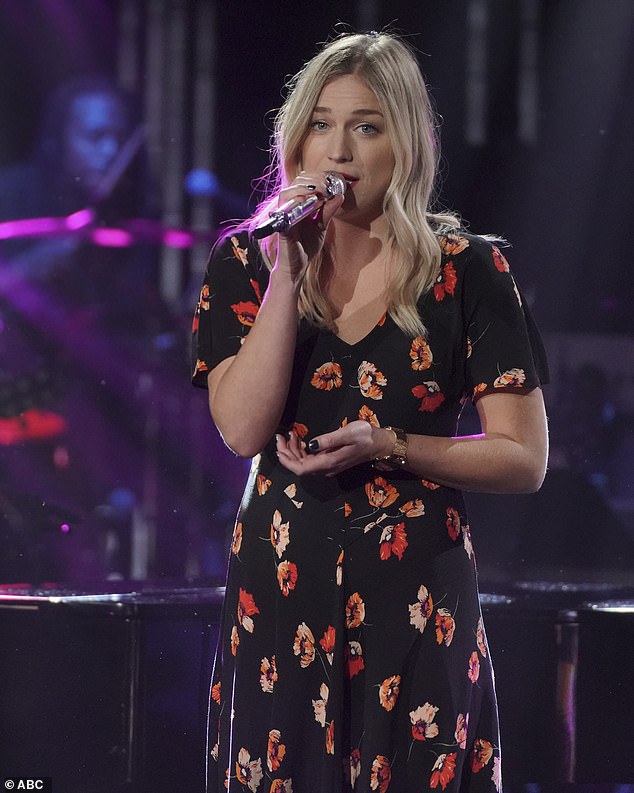 Fresh take: The singer performed a unique rendition of Jason’s song I’m Yours

‘I have loved this guy since I was a kid! That’s super cool for me, so I’m really excited,’ he said of their duet of his own idol’s Have it All.

The 41-year-old star teased Walker, 20, about his superhero costume in the tape, saying: ‘If you make it to the finals you’ve gotta bring out the cape.’

‘I’m sure he gets the Harry Potter similarity quite a bit,’ Jason added of the contestant, who has indeed had that very comparison made by the judges. 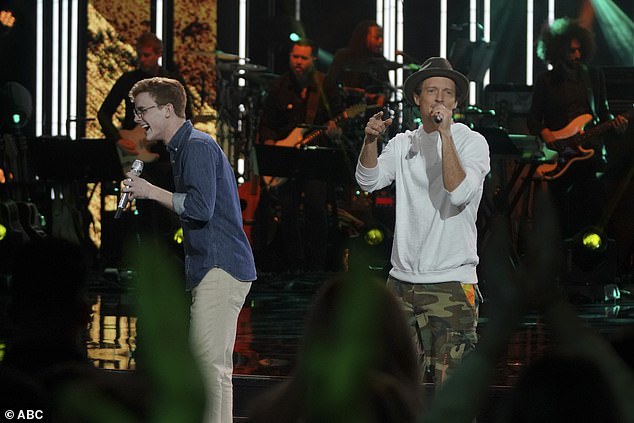 After telling him to ‘just be Walker,’ the pair shared a special handshake as they took the stage, with Jason insisting afterward: ‘This guy can croon, he can rap and he can wail – he has it all.’

‘It sounded like you guys were meant to be onstage together,’ Luke told them. ‘You walk up and we automatically smile. You make us pull for you and you never let us down, bud.’

Lionel, meanwhile, joked that he was ‘actually making wearing a pair of glasses sexy,’ insisting: ‘That was a perfect performance.’ 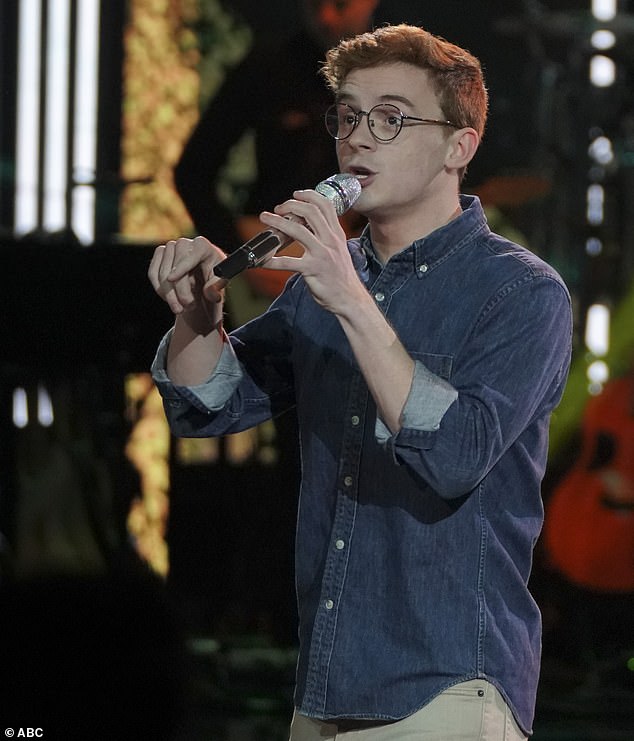 Sexy glasses: The singer has become known for his glasses as well as his voice

Madison VanDenburg, 17, broke into tears when told she was through.

She had performed with Pat Benatar and the rocker’s husband, guitarist Neil Giraldo, with Madison admitting she was ‘fangirling’ when she first met them.

Pat told the teen that the song, We Belong, was ‘really sentimental,’ explaining: ‘We’d been trying to have a baby for almost three years and when we were doing We Belong we found out we were pregnant for the first time.’ 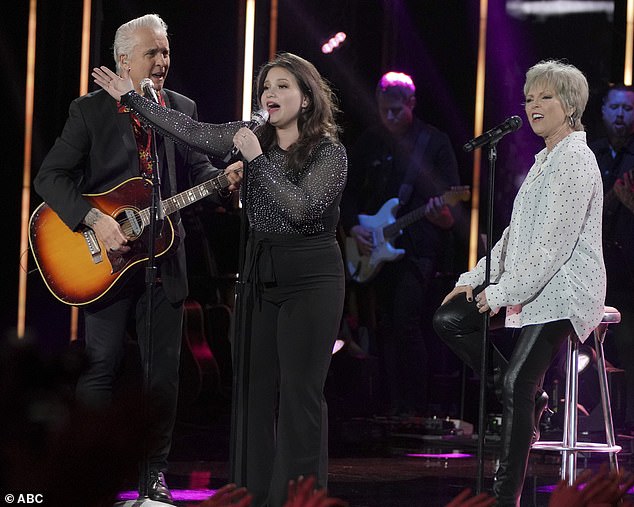 The legendary rockers were full of praise.

‘Madison is a great singer. She just has confidence about herself and vocal prestige,’ Pat said, while her husband insisted: ‘I think she could win.’

Luke told her she ‘literally went toe to toe’ with a ‘world class belter,’ saying: ‘You don’t know how to hit a wrong note.’ 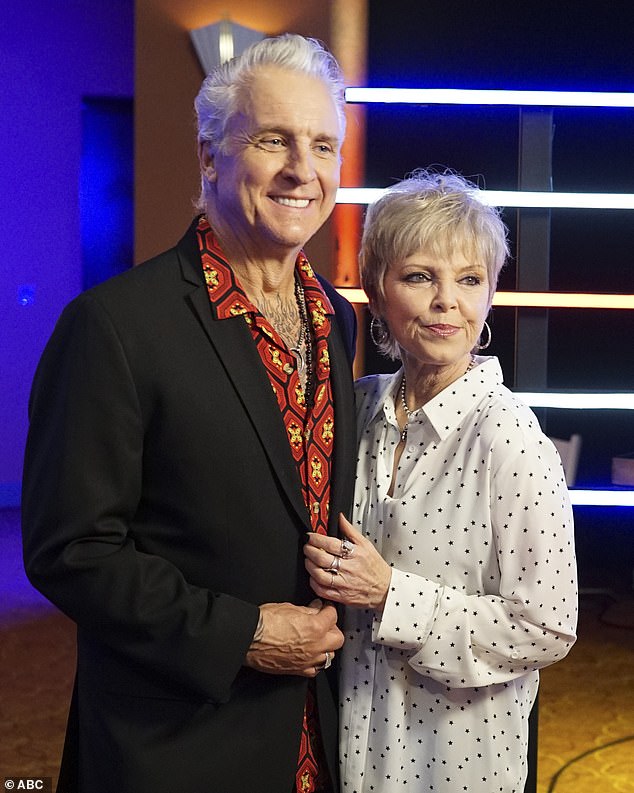 Music stars: Neil and Pat teamed up to perform duets with contestants as 10 of the top 20 performed

Katy, meanwhile, told her she looked ‘flawless’ and ‘like a star,’ adding: ‘Your voice is like a Ferrari. And you should never be scared to show off your Ferrari.’

Wedding singer Uché Ndubizu, 24, bragged of how he ‘vibed’ with Shaggy, who said of the competitor: ‘The personality is huge.’ 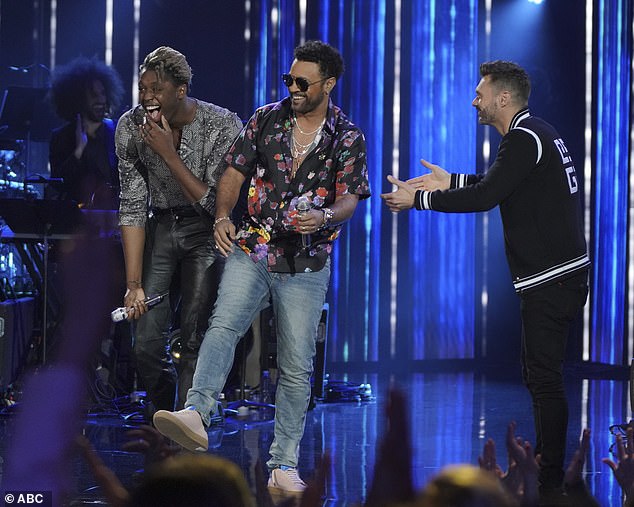 Big personality: Uche had no problem getting along with Shaggy

Their duet on Shaggy’s I Need Your Love had Katy joking about how she could not believe watching it was a job, calling it ‘so much fun’ and ‘such a vibe.’

‘You just bring a natural energy of excitement and fun,’ Luke told him, saying it allowed for ‘a little slip vocally.’

‘You’re having fun with this stuff and that’s so contagious,’ he insisted. 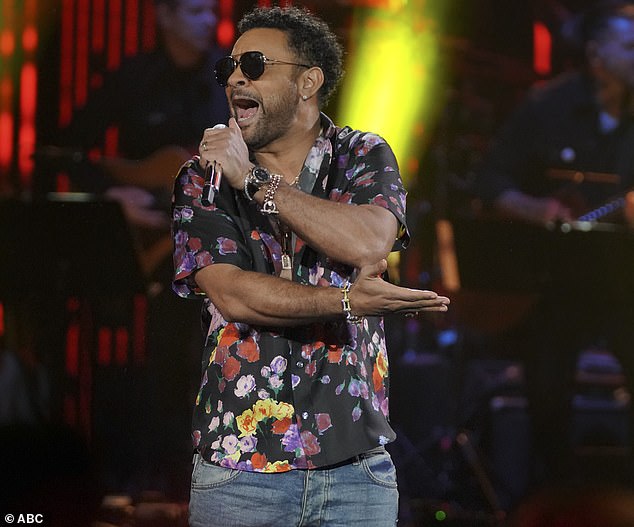 Fun show: Shaggy and Uche had the audience swaying to the music during their performance

The show’s youngest competitor, Riley Thompson, 16, admitted having a crush on Brett Young, joking of the 38-year-old country star: ‘Too old for me, but if he was younger!’

He compared her to Dolly Parton and predicted she would ‘melt faces’ with her performance of his song Like I Loved You, even though it was a ‘tragic love song’ she would not have the experience to fully grasp.

‘I think Riley has something special,’ he insisted, telling the judges after their performance: ‘Isn’t she incredible.’ 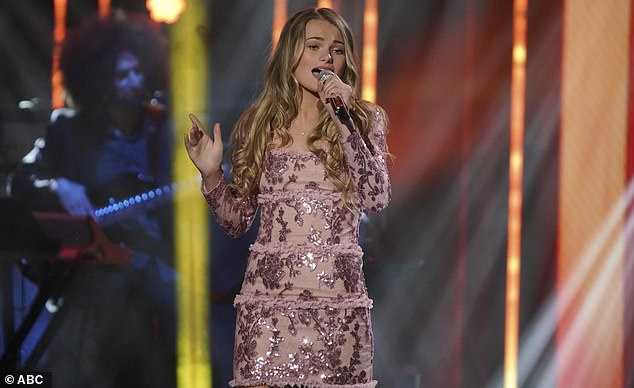 The judges agreed. ‘Our jaws were all on the floor,’ Katy insisted. ‘There’s this other gear? Good gosh it’s amazing.’

Luke called it her ‘best performance,’ and told her: ‘You looked like a real natural, seasoned performer up there. Way to show up, girl.’

Comeback kid Laine Hardy, 18, was the last performer of the night – and the last to get a spot in the next round. 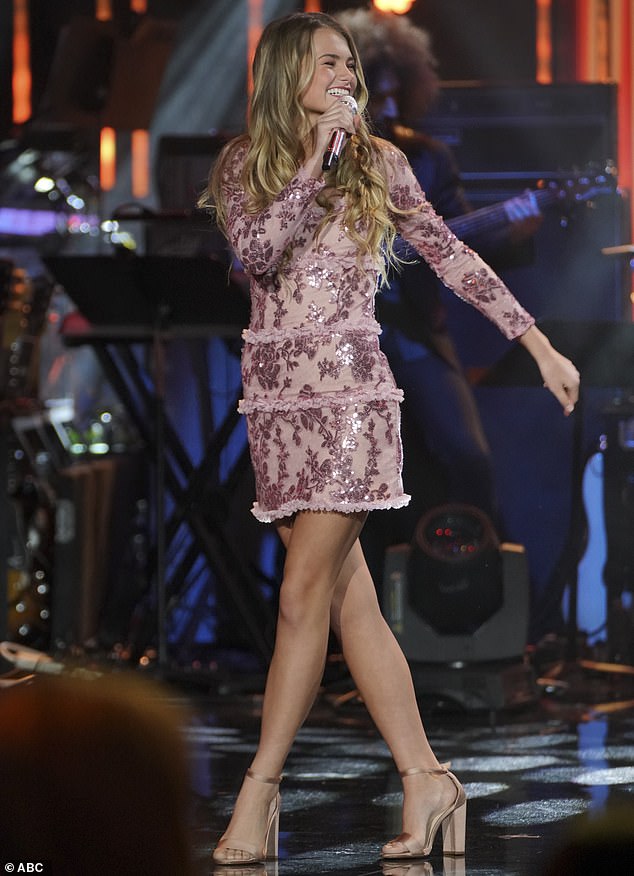 Best performance: The teenage singer performed Brett’s song Like I Loved You with him

After his performance with Elle King of The Band’s The Weight – changing lyrics to reference the judges – Katy asked: ‘Who are you? You look like a rock star. You’ve got your taste and you’re not gonna let go, are you?’

Lionel, meanwhile, told him: ‘The talent is in you. You have it. You have developed into an absolutely wonderful artist and we love you to death.’

Laine was also surprised by his older brother Kyle walking out onstage to tearfully hug him.

‘Had to leave the swamps to come see you, bro,’ Kyle told him. ‘It makes me the proudest person in the world to see him go so far, chasing his dream.’

American Idol continues on ABC on Monday night with all-star duets by the final half of the top 20. 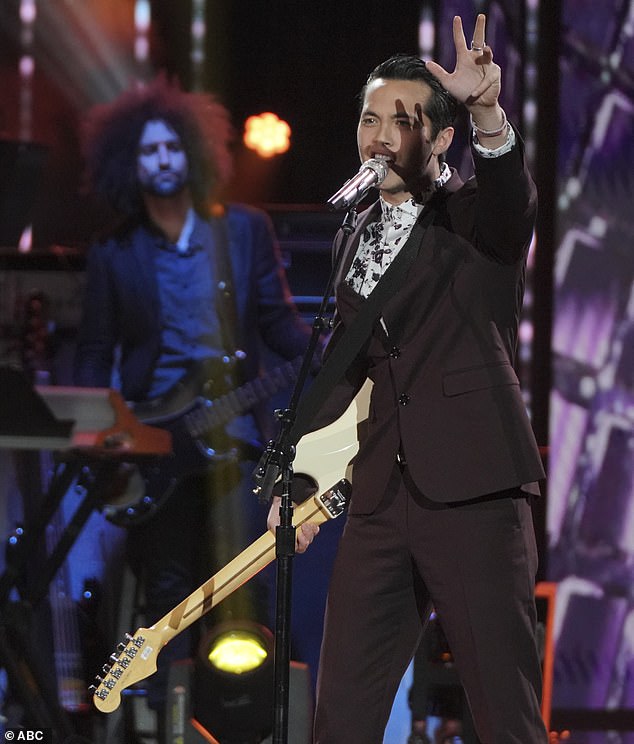 Last one: Laine Hardy was the last performer and the last to advance into the top 14 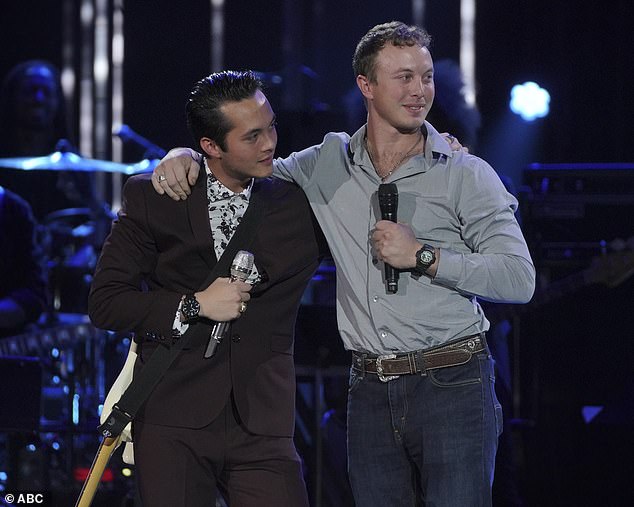 Special moment: The Louisiana singer was surprised by his older brother Kyle after he performed