Drug fatalities and suicides have been rising for over a decade, but until recently the impact of that on life expectancy was offset by the steady, rapid decline in people dying from cardiovascular disease and strokes.

However, the rise in people with a poor diet, minimal or non-existent exercise regime, and a diabetes diagnosis has brought that progress to a halt – revealing how fiercely the other epidemics are bulldozing Americans. 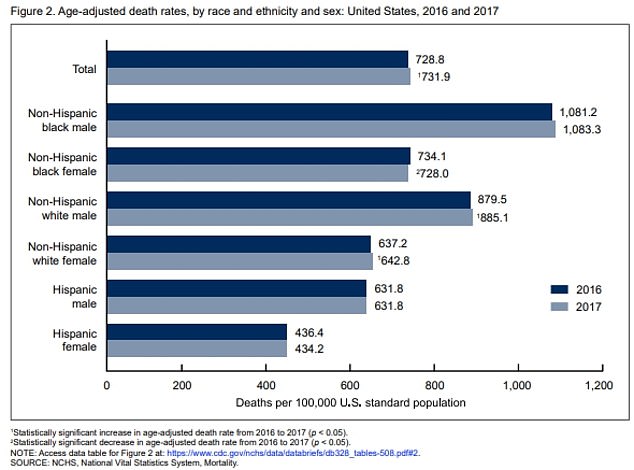 It’s not helped by the fact that lung diseases, mainly caused by smoking and likely by rising air pollution, remain high – the fourth leading cause of death – as a generation of smokers enters their elderly years.

Even another remarkable drop in cancer death rates – dropping more than 2 percent last year, continuing a decades-long trend – is not enough to balance it out.

Analysts say the incredibly disappointing data should be a wake-up call.

‘In a developed country like the US with the resources we had, we would expect to not have a declining life expectancy,’ Bob Anderson, chief of the mortality statistics branch at the CDC, told DailyMail.com.

The report, published today, also reveals rises in causes of death that blight the elderly – Alzheimer’s, falls, influenza and pneumonia – as the population ages.

But those have little impact on the overall life expectancy; it’s young deaths that really take a toll.

‘Changes among the younger ages have a larger impact than older ages,’ Anderson explained.

‘There’s a lot more potential life that’s not lived, so it tends to bring down the average more.’

LIFE EXPECTANCY: AMERICA REACHED A PEAK IN 2014 – BUT HAS BEEN TUMBLING EVER SINCE

And now, babies born are expected to live, on average, to 78.6 years old.

The issue is that death rates are soaring in the crucial age group of Americans between the ages of 25 and 44 years old.

The report reveals progress on lowering death rates among Hispanic women (who historically have the best life expectancy of any Americans) and black women. But rates rose among white men and women and black men, and held steady for Hispanic men.

Drugs and suicides are the biggest issue (click to read our specific reports on the rise in drug overdose deaths and the rise in suicide rates).

But the slow in progress against heart disease is just as concerning to analysts and public health officers.

‘[Cardiovascular disease has] been coming down rapidly over the last 30-40 years but since 2011 it’s not really going down much like it was before,’ Anderson said.

‘The overdose and suicide issues have been trending up over a decade but in the early years the decline in cardiovascular disease was almost completely offsetting it.

‘And now that that’s flattening off, the suicide and overdose rates are driving overall mortality.’ 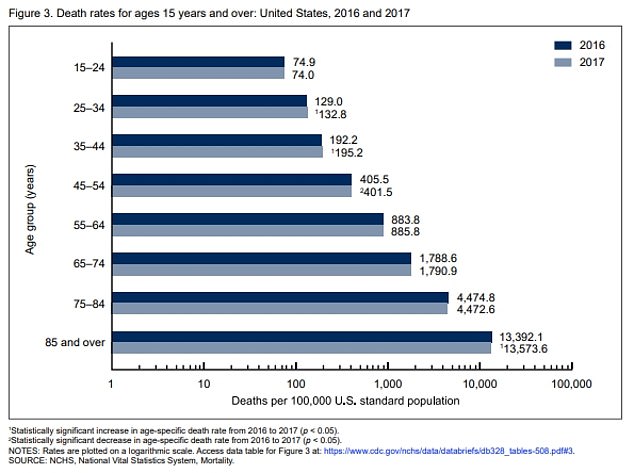 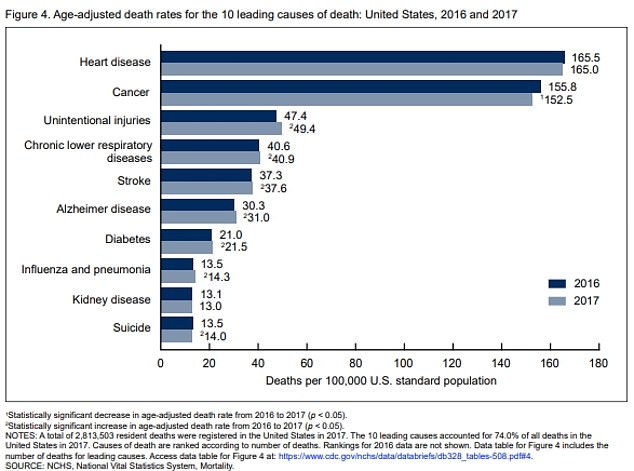 THE LINGERING TOLL OF CIGARETTES: WHY RESPIRATORY DISEASE IS STILL ONE OF THE TOP KILLERS

The report reveals chronic lower respiratory diseases, including COPD and asthma, is the fourth leading cause of death, with an increase of 0.7 percent from last year.

Those diseases not always smoking related but largely.

‘While smoking rates have come down a lot and people have quit smoking in large numbers, this is a disease that tends to affect people at the end of their life,’ Anderson said.

He added: ‘There may be some environmental factors as well. But it does strongly correlate with smoking patterns.’

THE MORTAL EFFECTS OF A POOR DIET AND NO EXERCISE: RISE IN ALZHEIMER’S, STROKES AND AN END TO PROGRESS ON HEART DISEASE

ALZHEIMER’S AND ITS IMPACT ON LIFE EXPECTANCY

Since this affects the oldest population generally the impact on life expectancy isn’t that great.

Anderson says the reason Alzheimer’s is claiming more lives is partly due to progress to lessen the risk of other diseases.

‘We all have to die of something at some point,’ he says. ‘If you can avoid cancer and cardiovascular disease and stroke [although in recent years the latter has increased], well what are they going to die of? The big one right now is Alzheimer’s and other neurodegenerative diseases.

‘You can’t avoid death. We all hope that it’s not going to be Alzheimer’s but that seems to be the case.’

‘The general understanding is that it’s because of the rise in diabetes which is probably indirectly related with obesity,’ Dr Mariell Jessup of the American Heart Association told DailyMail.com.

‘The majority of Americans continue to be concerned about cancer which may or may not be preventable, whereas the vast majority of cardiovascular disease and stroke are largely preventable.

‘And many cases of dementia are related to the same risk factors as cardiovascular disease.

‘There are many, many steps that can be taken not only to prevent heart attack or stroke but there’s strong evidence that that same healthy lifestyle can help prevent dementia.’