American man is NOT considered a suspect in the death of his wife, who fell off cruise ship deck

The husband of an American woman who plunged from the top deck of a Caribbean cruise ship is reportedly not a suspect in her death despite witness accounts that the pair had a volatile altercation.

Aruba newspaper Diario reported that the 52-year-old woman was seen struggling with a muscular man who was allegedly choking her before throwing her over the railing on the 16th deck. She landed on a lifeboat nine floors below.

Horrified passengers said the woman’s leg was torn off in the fall, creating a gruesome scene with glass everywhere.

The husband, who is also American, was hauled off the ship by authorities in Aruba on Tuesday morning. The FBI is currently investigating the incident alongside officials in Aruba.

According to Diario, cruise ship officials say the husband is not considered a suspect in the death investigation as authorities await autopsy results.

The fight reportedly began at the ship’s casino, on the Lido deck on the 16th floor, around 10:30pm. The woman plummeted from the deck at 4am, landing on deck 7 on Lifeboat 2 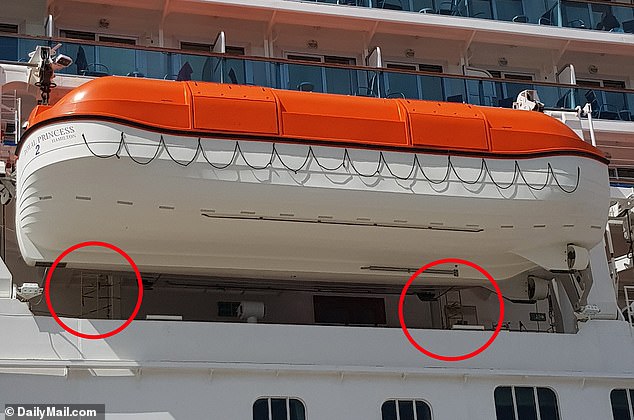 A man was hauled off a cruise ship after a woman was allegedly choked and pushed off a balcony, severing her leg after the couple reportedly had a volatile altercation during a Caribbean getaway. Pictured is the section of the ship which has been closed off by police. Circled are the police lines used to cordon off the crime scene 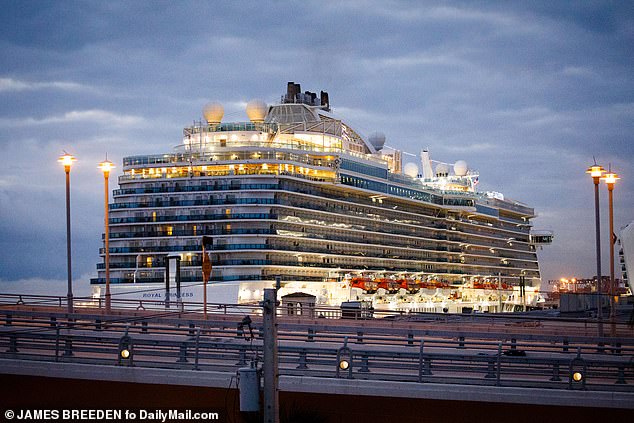 The Royal Princess had embarked on an eight-day cruise around the Caribbean on November 9 and returned to Fort Lauderdale, Florida, on Saturday.

Passenger Logan Tignor described the horrifying incident on a video call with CBS News, saying: ‘It’s surreal and I’m kind of traumatized for it. I never would expect that it would happen on vacation.’ 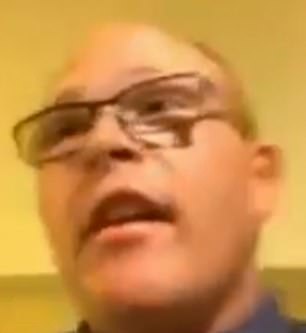 Passenger Logan Tignor described the horrifying incident on a video call with CBS News, saying: ‘It’s surreal and I’m kind of traumatized for it. I never would expect that it would happen on vacation’

Photos from the scene obtained by DailyMail.com show yellow tape cordoning off the area around and below the lifeboat.

Earlier this week a spokeswoman for Aruban prosecutors confirmed to DailyMail.com that the man taken off the boat was the woman’s partner and that the woman’s death is being treated as unnatural.

Local investigators have performed an autopsy to establish how the woman died. The FBI is also carrying out its own investigation.

The name of the victim and the man taken off the boat have not been released. No arrests have been made yet.

A source aboard the ship told DailyMail.com: ‘We are sailing the southern Caribbean. It’s the ship that [British TV station] ITV used for their show ”The Cruise”. It was two passengers they had a row in the casino that night.’

For the first time, we are hearing from passengers who were on the cruise ship where an American woman mysteriously died.

The 52-year-old woman died Tuesday morning, after reportedly plunging from the upper deck of a Royal Princess cruise ship. pic.twitter.com/cWUxQbYWQ2 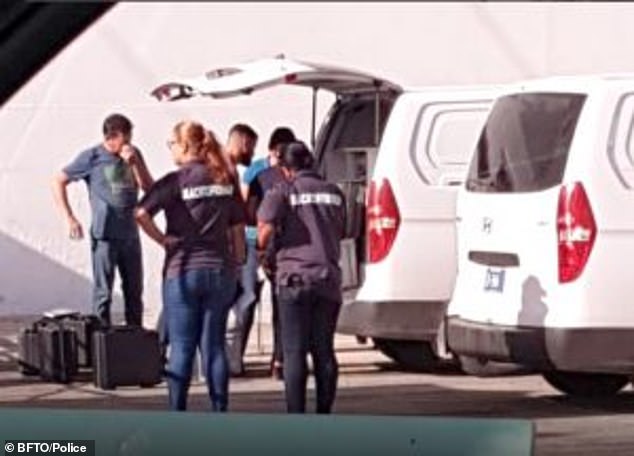 The man, described as being muscular, allegedly strangled the woman before tossing her from the ship’s 16th deck. Aruba investigators (pictured) are now performing an autopsy to establish if the woman was choked to death or died from the fall

‘The gossip on board is rife. We were all woken at 4.30am by a security alert by the captain. We will be at sea for two days from today heading to Fort Lauderdale.’

A second source added: ‘We can literally see the lifeboat from our room. Blood and broken glass all over it.

Another passenger said: ‘We are on this ship too. Ten police officers came aboard. The announcement was a criminal investigation was to be conducted before we are given clearance. Two couples were asked repeatedly to go to customer relations.’

The fight reportedly began at the ship’s casino, on the Lido deck on the 16th floor, around 10:30pm.

The woman plummeted from the deck at 4am, landing on deck 7 on Lifeboat 2.

Princess Cruises said in a statement to DailyMail.com: ‘Princess Cruises can confirm that a 52-year-old American female guest passed away early yesterday morning aboard Royal Princess as the ship was enroute to Aruba.

‘It was reported to the local authorities who met and boarded the ship upon arrival. The cause of death is not yet known at this time.

‘We are deeply saddened by this incident and offer our sincere condolences to the family and those affected.’

Princess Royal departed Aruba at 10pm on Wednesday night, heading towards Kralendijk, Bonaire. It will return to Florida on November 17.

The massive cruise ship has a guest capacity of 3,600 at double occupancy.

At its launch in Southampton, England in 2013, the ship was christened by the Duchess of Cambridge, who became the vessel’s ‘godmother’. 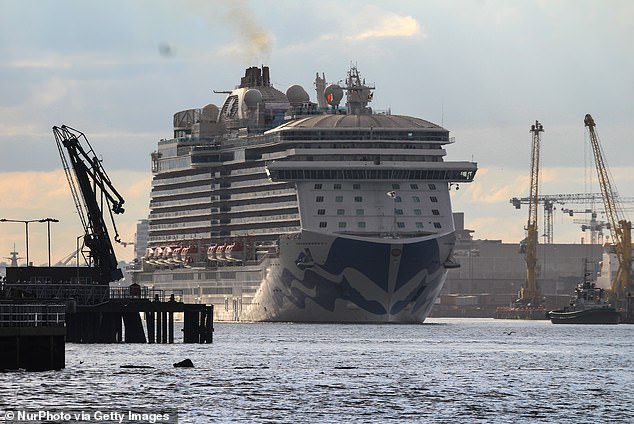 The cruise ship (pictured) has a capacity of 3,600 at double occupancy. Neither the woman who died nor the man who was taken off the boat have been named 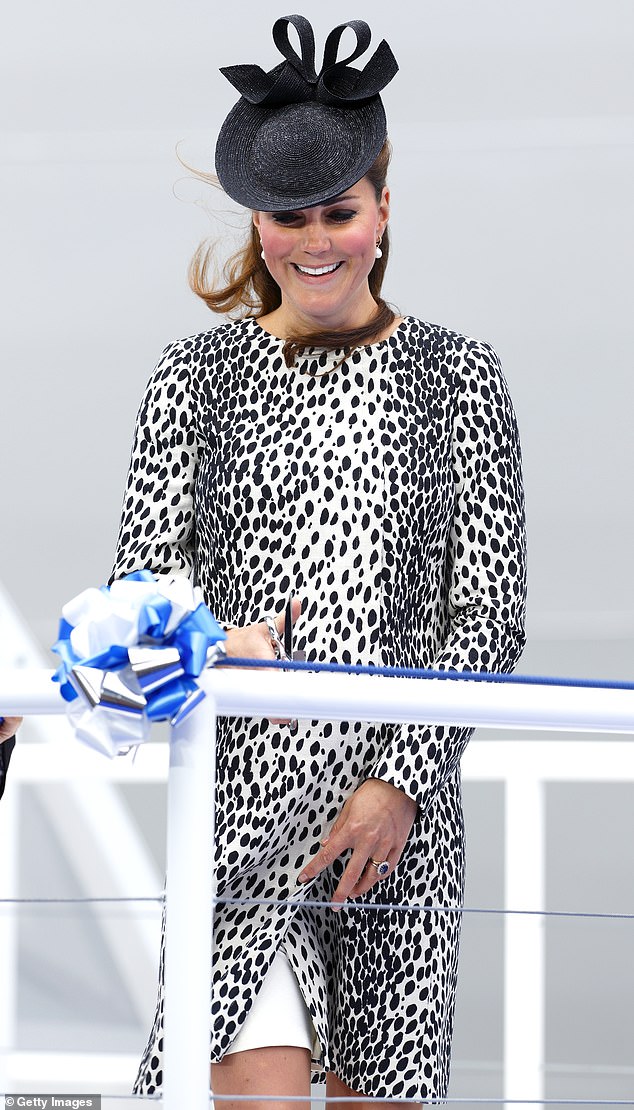 Kate Middleton is seen christening the Royal Princess Southampton, England, in June of 2013