American Psycho author Bret Easton Ellis has questioned whether Black Panther deserves its best picture nomination, asking if the the academy pushed it for the sake of diversity and not for its quality.

The screenwriter and director, 54, said no one in Hollywood ‘thinks ‘Black Panther’ is that good as a movie’ but ‘as a piece of representation, they are supporting it’, The Wrap reports.

Speaking on the B.E.E. podcast he said ‘it’s all fake news, folks’, calling the ‘culture’ the Oscars is pushing ‘rather nauseating’.

Ellis added: ‘No superhero movie has ever gotten a Best Picture nomination. But believe me, Disney is doing everything in its power to make sure this happens.

‘Even though there is no one out here in La La Land I’ve met who thinks Black Panther is that good as a movie. Yet, as a piece of representation, they are supporting it.

‘Does it really deserve one? The entertainment press and the studio is selling the notion that Black Panther is a grand piece of cinematic art that cannot be ignored.

‘And this notion is being shoved down our throats and we can only smile in disbelief. Or perhaps understand that this is just the moment we’re trapped in. A joke, a hoax. It’s all fake news, folks. 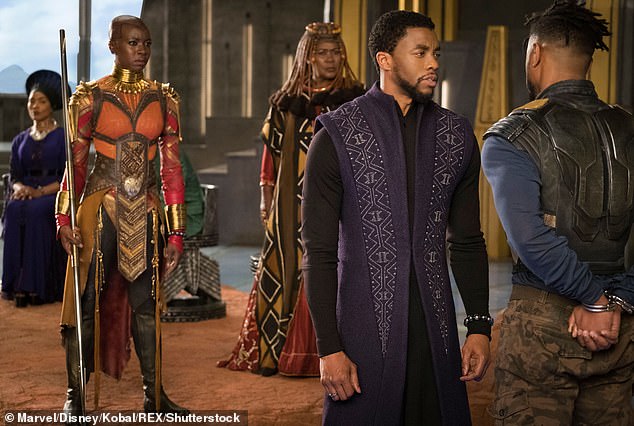 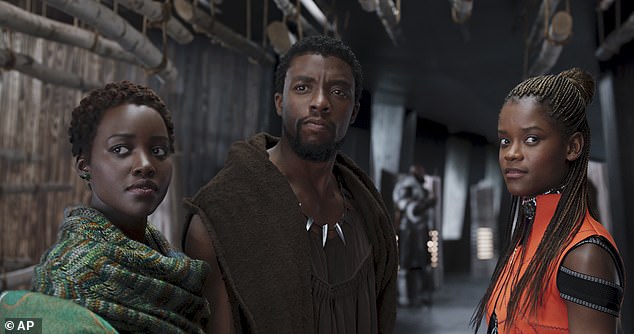 Lupita Nyong’o, from left, Chadwick Boseman and Letitia Wright in a scene from Black Panther

Ellis is no stranger to controversy when it comes to award winning movies. In 2012 he was forced to apologize for a handful of ‘douchy’ tweets he sent out earlier this month against Zero Dark Thirty director and Oscar winner Kathryn Bigelow.

He tweeted: ‘Kathryn Bigelow would be considered a mildly interesting filmmaker if she was a man but since she’s a very hot woman she’s really overrated.’

In 2017 he stepped into the political arena and said he was tired of all the protesting following Donald Trump’s inauguration.

Ellis made the comments about Black Panther a day before it picked up six Oscar nominations. It could walk away with best picture and best original music score at the 91st Academy Awards.

The comic book film is the first release from the studio to have a predominantly black cast, and critics are hailing it as Marvel’s ‘most woke’ movie.

The Hobbit alumni Andy Serkis and Martin Freeman feature, as do Get Out Oscar nominee Daniel Kaluuya and The Walking Dead star Danai Gurira.

It has already picked up an award for the outstanding performance by an ensemble in a motion picture at the Screen Actors Guild Awards and is now the highest-grossing superhero movie ever.

At the global box office, the film has collected more than $1.2 billion against a pre-marketing budget of $200 million. 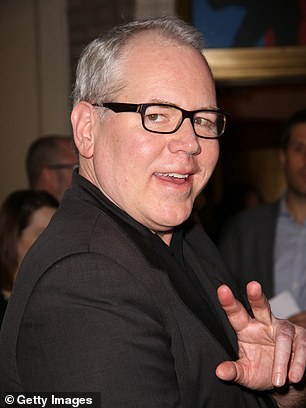 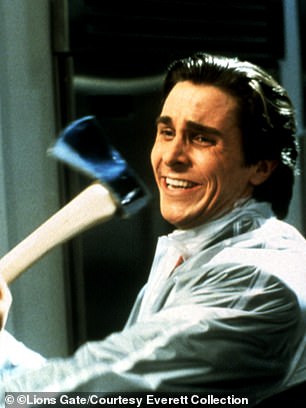 Screenwriter and director Ellis, left, said no one in Hollywood ‘thinks ‘Black Panther’ is that good as a movie’ but ‘as a piece of representation, they are supporting it’. Ellis wrote American Psycho which starred Christian Bale, right, as Patrick Bateman in the movie adaptation 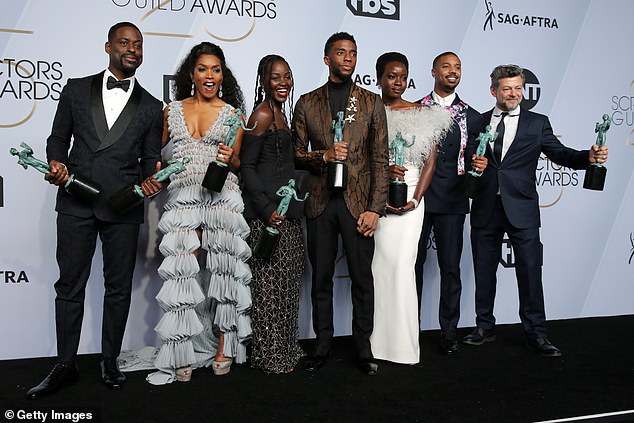 Black Panther was also the first film since Avatar – the top-grossing movie ever – to lead the box office for five consecutive weekends, according to reports.

It will go up against BlacKkKlansman, Bohemian Rhapsody, The Favourite, Green Book, Roma, A Star Is Born and Vice for Best Picture at the 91st Oscars, airing Sunday, February 24 on ABC.