Ronald Kessler, a former Washington Post and Wall Street Journal investigative reporter, is the New York Times bestselling author of ‘The Trump White House: Changing the Rules of the Game’ and ‘The Season: Inside Palm Beach and America’s Richest Society.’ Kessler and his wife have regularly attended the Red Cross Ball and are also regulars at Mar-a-Lago as guests of Trump

The American Red Cross is refusing to disclose its financial results after it dumped Trump’s Mar-a-Lago as the venue for its International Red Cross Ball and instead held the venerated event at the Norton Museum of Art in West Palm Beach, Florida.

The town of Palm Beach requires charity events to disclose their financial results.

The event would have clearly suffered a steep decline in proceeds since Mar-a-Lago can fit 750 guests compared to the 400 guests the museum can accommodate.

The decision to change venues came after Trump made remarks that were perceived as racist about the violence in Charlottesville in August 2017, saying there were ‘very fine people’ on both sides.

The American Red Cross will not reveal its proceeds for its fundraising ball held at the Norton Museum of Art in West Palm Beach, Florida, in February (pictured), after switching from Mar-a-Lago. The event would have clearly suffered a steep decline in proceeds since Mar-a-Lago can fit 750 guests compared to the 400 guests the museum can accommodate 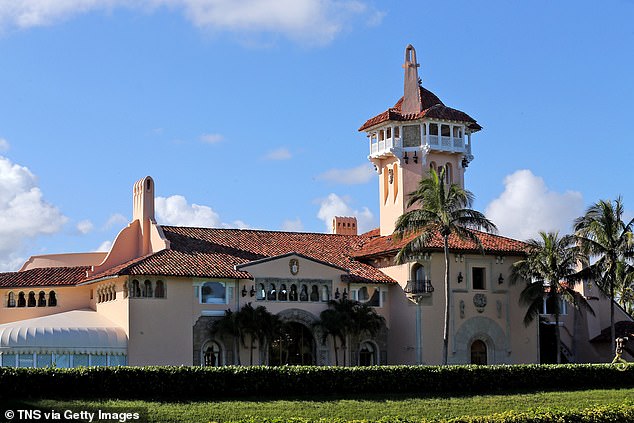 Many of the demonstrators at the Unite the Right rally were self-identified neo-Nazis and white supremacists, others were opposed to taking down a stature of Confederate General Robert E. Lee and the rest were counter-protesters to the right-wing groups.

Laurel Baker, the executive director of the Palm Beach Chamber of Commerce, publicly called on charitable events to stop scheduling events at Mar-a-Lago.

‘If you have a conscience, you’re really condoning bad behavior by continuing to be there,’ Baker told the Palm Beach Post.

‘Many say it’s the dollars [raised at the events] that count. Yes. But the integrity of any organization rests on their sound decisions and stewardship.’

That prompted the Red Cross Ball and eventually 21 other charities to cancel their events at Mar-a-Lago.

Since there was not enough time to book a new spot, the Red Cross did not hold the ball in 2018, depriving the organization of needed funds for disaster relief and other charitable activities.

After the event moved to the newly expanded Norton in February this year, public disclosure of the fundraising amount was no longer available because West Palm Beach does not require such disclosure by charities. 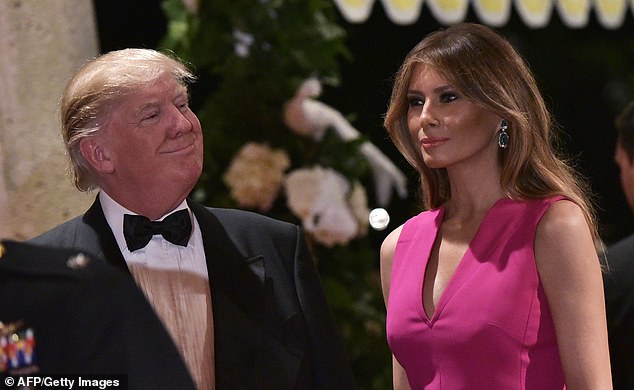 The decision to change venues came after President Trump made remarks that were perceived as racist about violence in Charlottesville in August 2017, saying there were ‘very fine people’ on both sides. Pictured: President Trump and Melania attending the Red Cross ball in 2017 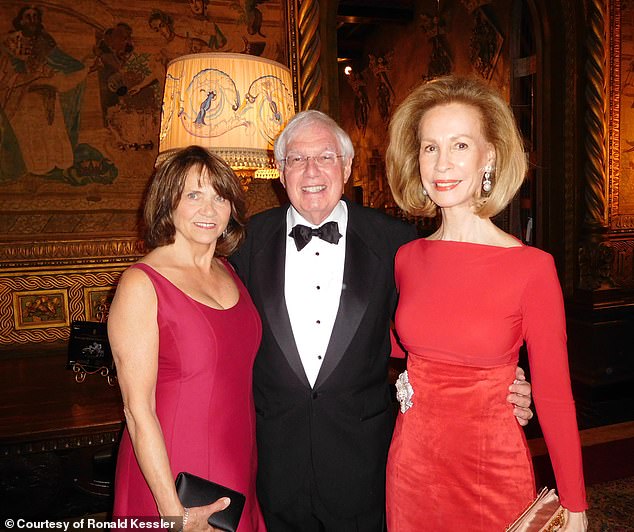 But since the Norton seats 46 percent fewer guests than Mar-a-Lago, the event clearly suffered a steep decline in proceeds.

Unlike Mar-a-Lago, which offers valet parking where guests emerge from their cars under canopies, the Norton event provided no valet parking.

Guests parked in the museum’s parking lot across the street from the building and had to scramble across busy South Dixie Highway in their tuxedos and evening gowns in the middle of a downpour.

When DailyMail.com contacted the American Red Cross for the financial results of this year’s event, the organization said in a statement: ‘The American Red Cross is grateful to everyone who supports our life-saving mission—no matter if it is through donations of time, money or blood.

‘The International Red Cross Ball is underwritten by generous donors in an effort to raise significant funds for the lifesaving mission of the Red Cross, and our standard Red Cross business practices do not include publicly releasing breakdowns of expenses or contract details.’

The American Red Cross’ South Florida Region did issue a press release in April that said that it held three galas, including the one at the Norton, that all together for the three charity events “raised over $2 million.” 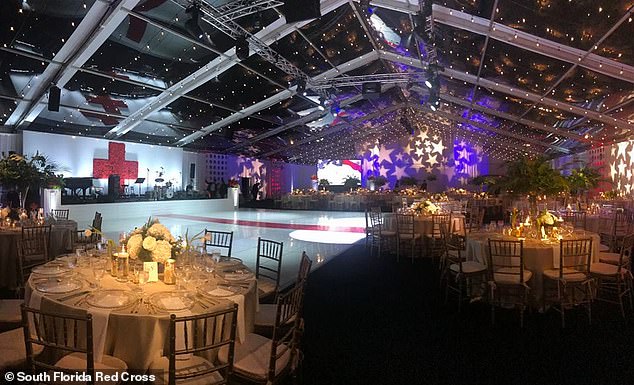 A press release from April said the Norton gala was one of three events that  ‘raised over $2M’ but failed to specify that the figure was before expenses were deducted. Pictured: This year’s fundraiser at Norton 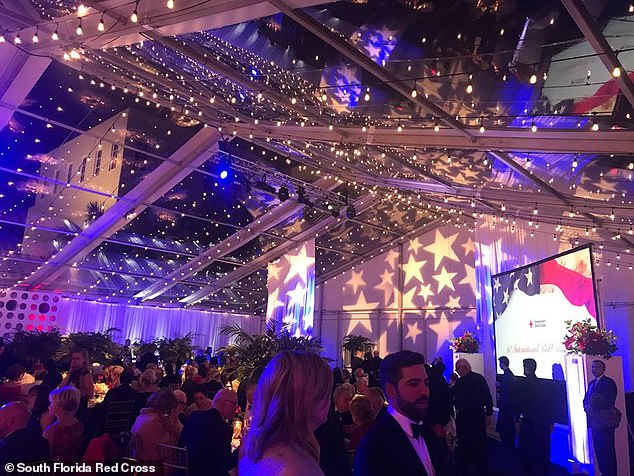 Unlike Mar-a-Lago, which offers valet parking under canopies, the Norton event provided no valet parking. Guests parked in the museum’s parking lot across the street from the building and had to scramble in their tuxedos and evening gowns in the middle of a downpour. Pictured: This year’s Red Cross gala at the Norton Museum of Art

But the release failed to specify that the figure was before expenses were deducted.

Based on the filings with the Palm Beach town clerk, just slightly over half of the proceeds from the Red Cross Ball actually wind up going to the Red Cross.

After the Red Cross decided to move from Mar-a-Lago, John Yurtchuk, a co-chair of the event and one of the ball’s biggest benefactors, refused to support the gala in the future or to attend himself.

Yurtchuk is chairman and owner of Calspan, a Buffalo, NY firm that independently tests automobiles, planes, and ships for their builders.

Each year, Yurtchuk contributed $50,000 to the Red Cross Ball, flying many of his 24 guests in 2017 to Palm Beach on his company’s plane.

But Yurtchuk says the Palm Beach and Martin Counties Chapter of the Red Cross based in West Palm Beach never gave him the courtesy of informing him of the decision to move from Mar-a-Lago or explaining it.

The decision to move the event from Mar-a-Lago “is truly a sad commentary on how a nonprofit allowed politics to cloud their judgment and how poorly that was communicated to its longtime benefactors,” Yurtchuk says.

After Laurel Baker issued her call to dump Ma-a-Lago as a venue for charitable events, Carrie Bradburn, president of the chamber, apologized to Mar-a-Lago executives for Baker’s remarks.

The Red Cross Ball at the Norton was billed as a ‘salute to the military’ in honor of those who serve their country and the sacrifices their families make while they are deployed.

The event at the Norton was the 61st annual International Red Cross Ball, the premier charity event in Palm Beach, where the wealthiest people in America buy estates to flaunt their success and enjoy the balmy breezes during the winter months.

The ball was founded in 1957 by cereal heir Marjorie Merriweather Post, who also built Mar-a-Lago, a 128-room, 62,500-square-foot Mediterranean-style complex. The ball is called ‘international’ because ambassadors representing countries from around the world are invited as guests and showcased.

Before he was president, Trump would fly the ambassadors down from Washington on his jet, giving them an additional incentive to attend the event at his idyllic home and club that spans 20 acres on both sides of the island.

When I first interviewed Trump for my 1999 book “The Season: Inside Palm Beach and America’s Richest Society,” he told me on the flight to Mar-a-Lago that while he often attends the ball and it is the highlight of the Palm Beach social season, the customs and rituals that surround it are “amazing.”

“It’s from a hundred years ago,” he said. “It’s like a religion to them. They worry about this 365 days a year. It’s incredible. Only in Palm Beach.”

Ironically in view of the claims that Trump is racist, on the flight he imitated the nasal, constricted tones of Palm’s Beach’s blue blood Old Guard denouncing his club Mar-a-Lago because it admits blacks and Jews as members. To this day, some clubs in Palm Beach refuse to admit them.

At the last Red Cross Ball held at Mar-a-Lago, demand for seats increased after word got out that President Trump and First Lady Melania Trump would attend, and requests to buy more tickets had to be turned down.

As for Mar-a-Lago, which Trump calls the Winter White House, it replaced the events that pulled out with other Republican, pro-Trump, law enforcement, or pro-life events so that it was fully booked for the season that just ended.

Others never left. Explaining its decision to remain at Mar-a-Lago, Fern Fodiman, president of the board of H.O.W. Hearing the Ovarian Cancer Whisper, said, “We believe in freedom of speech and do not feel any need to change. Mar-a-Lago is strictly a venue for our yearly educational luncheon, not a platform for politics.”

For full disclosure, my wife Pamela Kessler and I have regularly attended the Red Cross Ball at $2,000 a couple over the years and as guests of John Yurtchuk, a co-chair of the event and one of the ball’s biggest benefactors. We are also regulars at Mar-a-Lago as guests of the president but pay for dining and parties.