Americans are testing positive for marijuana, even as overall level of positive tests are decreasing

The number of Americans testing positive for marijuana on employer-required drug screenings is increasing, even as overall positive tests are decreasing, according to data from Quest Diagnostics.

In 2020, 2.7 percent of drug tests administered by Quest were positive for Marijuana, up from 2.5 percent the year before, first reported by The Wall Street Journal.

The positivity rate overall decreased for the first time in a decade last year, as it decreased from 4.5 to 4.4 percent year-over-year.

The positivity rate of workforce drug testing decreased in 2020 after nearly a decade of year-over-year increase, new data from Quest Diagnostics show

Marijuana use is increasing across the country as more states begin to legalize it for medical and recreational use.

Purchase of legal marijuana skyrocketed during the pandemic, with the industry bringing in over $18 billion in revenue from April 2020 to April 2021.

Quest carries out a large portion of employer drug testing around the country, whether for new hires or for testing of current employees.

Dr Barry Sample, Quest’s senior director for science and technology, told the Journal that attitudes towards marijuana are changing.

‘We haven’t really seen a sea change in the overall testing rate, but we’ve been seeing changes in the degree to which marijuana is included in the testing panels,’ he said.

Some companies are removing marijuana from the list of drugs that will cause a prospective employee to fail a drug test.

By doing so, they are increasing their ability to recruit employees and widening their potential talent pool. 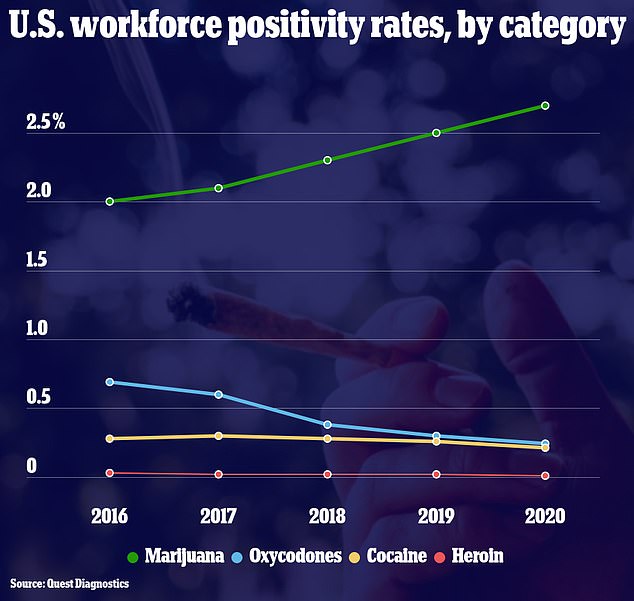 Despite the overall decrease in positivity rates, more testees were positive for marijuana in 2020 than in 2019, a trend that has continued over the past five years

The restaurant industry, which is currently undergoing a well documented labor shortage, had the highest marijuana positivity rate at 6.4 percent.

Turning away potential employees for smoking marijuana could exacerbate labor issues, so many are dropping the requirement for new employees.

Marijuana is fully legal in 16 states and the District of Columbia.

South Carolina, Alabama, Tennessee, Kansas, Wyoming and Idaho are the only states where the drug is still fully illegal and not decriminalized. 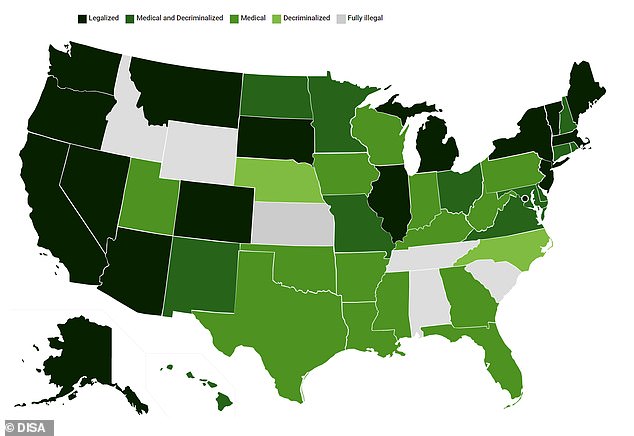 Marijuana is at least partially legal in almost all American states. It is fully legalized for recreational use in 16 states, and many others are likely to follow in the coming years 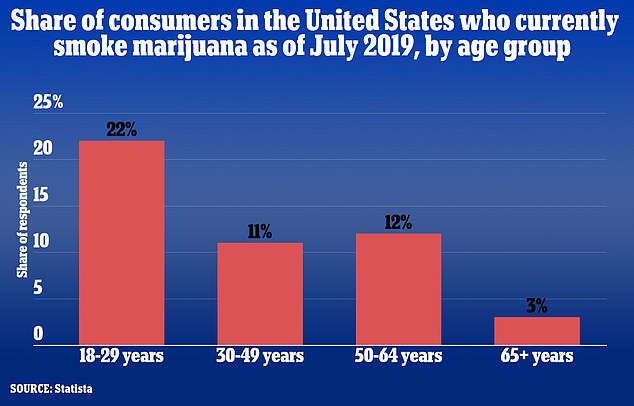 Marijuana is significantly more popular with younger generations than older generations, signaling a potential change in public opinion over the years

While each state currently has its own rules, it is likely that more states begin to decriminalize and legalize marijuana for recreational use as public opinion changes.

Polling by Statista from 2019 shows that 22 percent of Americans aged 18 to 29 are currently users of marijuana.

Marijuana is still not legalized federally, though, meaning jobs that are part of or overseen by the federal government will reject candidates who test positive for the drug, no matter what state they reside in.

While the drug slowly becomes legalized in states across the country, there has been no action on the federal level to do so.