Opera singer Emanne Beasha, 10, advanced to the semifinals of America’s Got Talent on Wednesday after her stunning performance of an aria from the opera La Wally.

After hearing her sing on Tuesday, judge Simon Cowell, 59, had said that she was ‘on a different planet from everyone else,’ and compared her skill to that of the finest Olympians.

He even said he’d eat the judging table before him if she didn’t go through.

Young singer: Opera singer Emanne Beasha advanced to the semifinals of America’s Got Talent on Wednesday during a live results show on NBC

‘Honest to God, your voice, from a 10-year-old, it was like being hit by something,’ he testified.

She took center stage along with French beatbox quartet Berywam and the guys seemed to know it was over before the vote was even announced.

Emanne immediately ran to hug them when her name was called.

AGT judge Howie Mandel, 63, admitted he wasn’t an opera fan, but called Emanne ‘the Mona Lisa of talent,’ saying he could recognize great art even if it wasn’t his style. 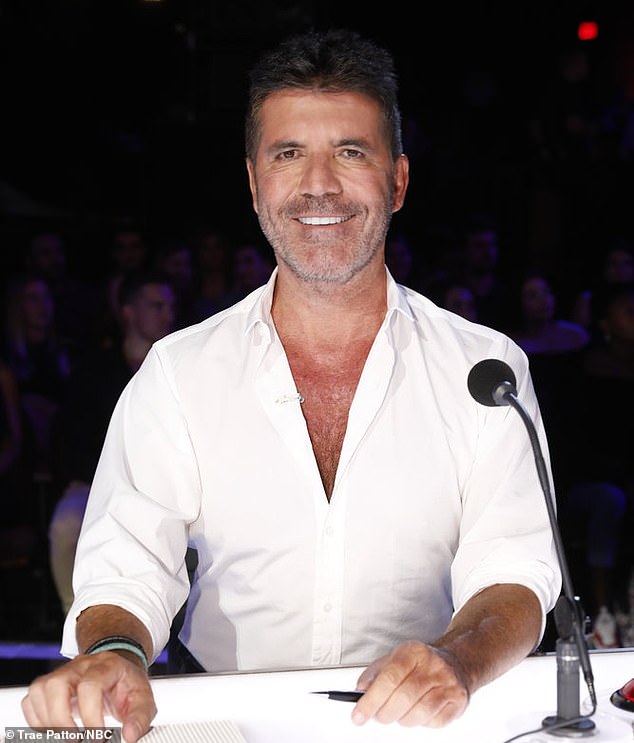 Table eating: Simon had vowed to eat the judging table if Emanne did not advance to the semis 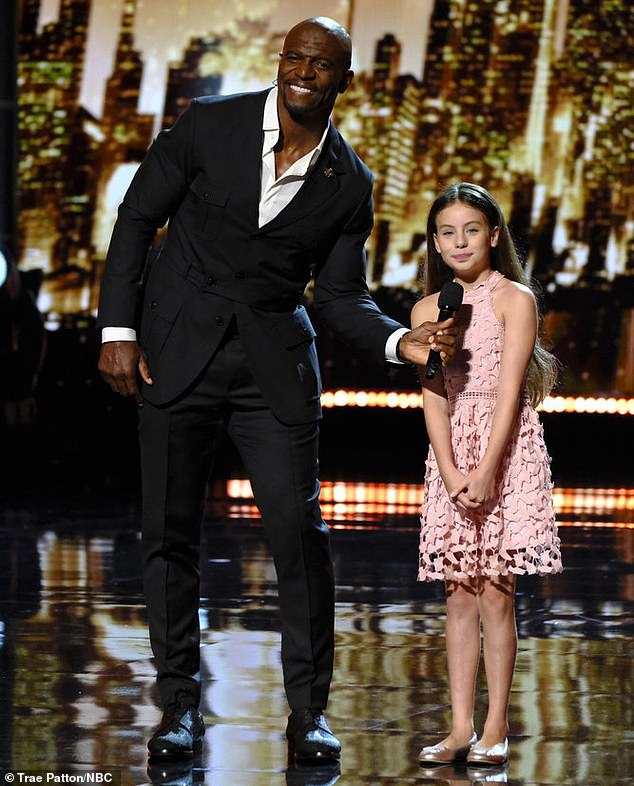 The host: Terry Crews asked Emanne for her reaction after she advanced and she thanked everyone who supported her

‘There’s no denying how brilliant an artist [you are] and how much talent you have,’ he noted.

Emanne wasn’t the only young artist to go through on AGT’s last quarterfinal of the season.

All but one of the contestants that advanced turned out to be under age 27. 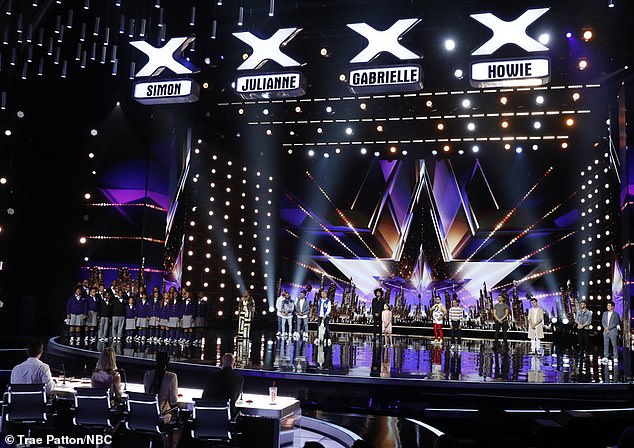 Just seven of the 12 acts that performed Tuesday made it to the semifinals, and one was voted on live with the Dunkin’ Save and the last chosen by the judges.

The Detroit Youth Choir were the first to advance and the kids, ages eight to 18, jumped up and down in joy onstage and looked toward the balcony where the rest of their group did the same.

Their infectious spirit had grabbed the audience on Tuesday’s show as they sang their own remix of Carrie Underwood’s 2018 hit The Champion, with original choreography. 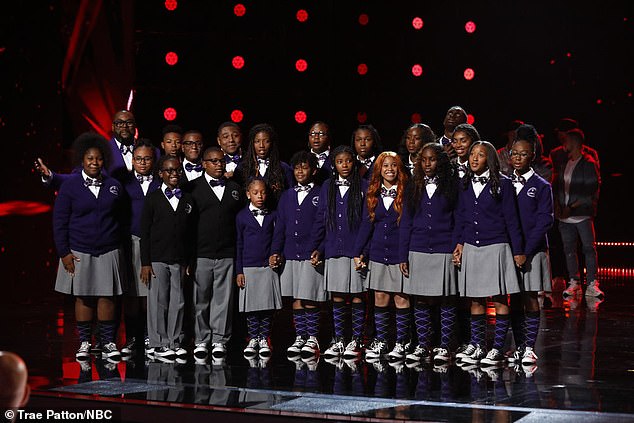 First through: Detroit Youth Choir with choir director Anthony White was the first act to advance

‘Every time you guys come onstage it’s just amazing,’ Simon said, calling the decision ‘a bit of a nail-biter.’

‘I could not be happier for you,’ he added. 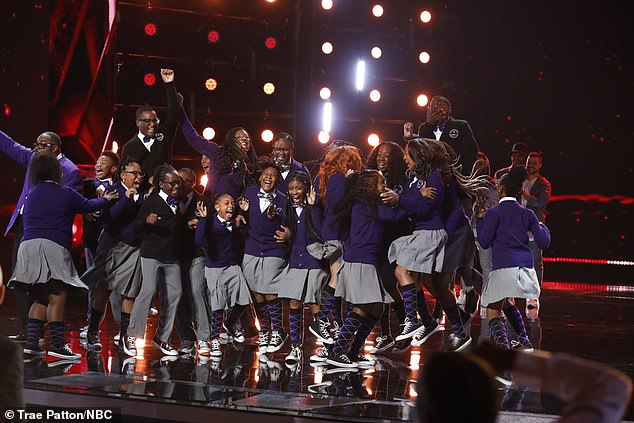 Gonzo, the hilariously awkward tambourine player from Japan, did not make it.

Viewers were then treated to a performance by the cast of Celestia, a new show playing in Las Vegas.

Made of up of former AGT acts, it featured acrobats tumbling at rapid speed, men jumping rope on rotating spheres and an archer shooting gum out of the mouth of a girl, among other feats. 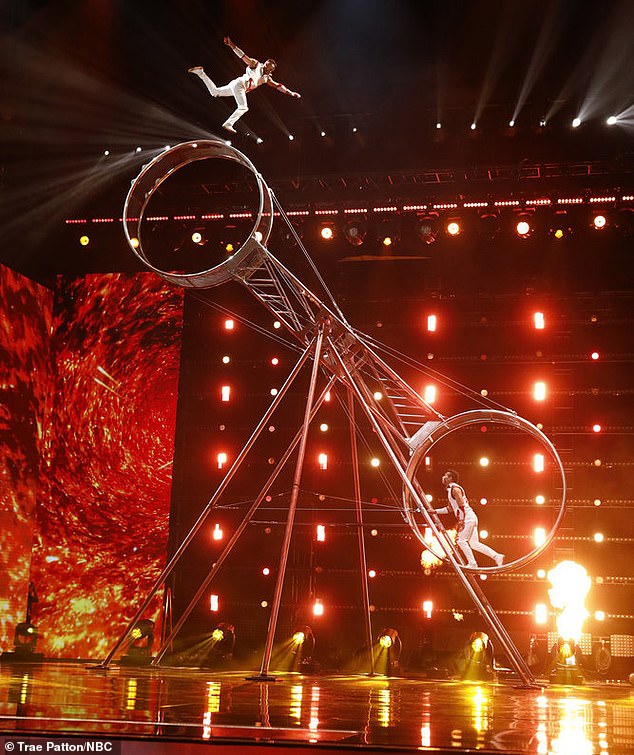 Special performance: Viewers were treated to a performance by the cast of Celestia, a new show playing in Las Vegas 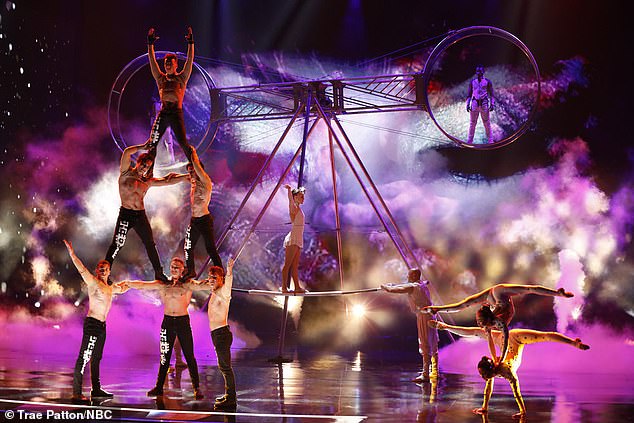 Former acts: Celestia, made of up of former AGT acts, featured acrobats tumbling at rapid speed, men jumping rope on rotating spheres and an archer shooting gum out of the mouth of a girl, among other feats

While everyone waited for America’s next pick to be revealed, the judges read Tweets that the some of the show’s 12 million viewers had posted about them.

‘Even though he wears the same white button-up shirt on every episode of AGT, Simon Cowell still looks like a snack,’ one said, which made Simon laugh.

‘Why does Julianne’s hair look like ramen noodles?’ Simon said, reading one about judge Julianne Hough, 31. 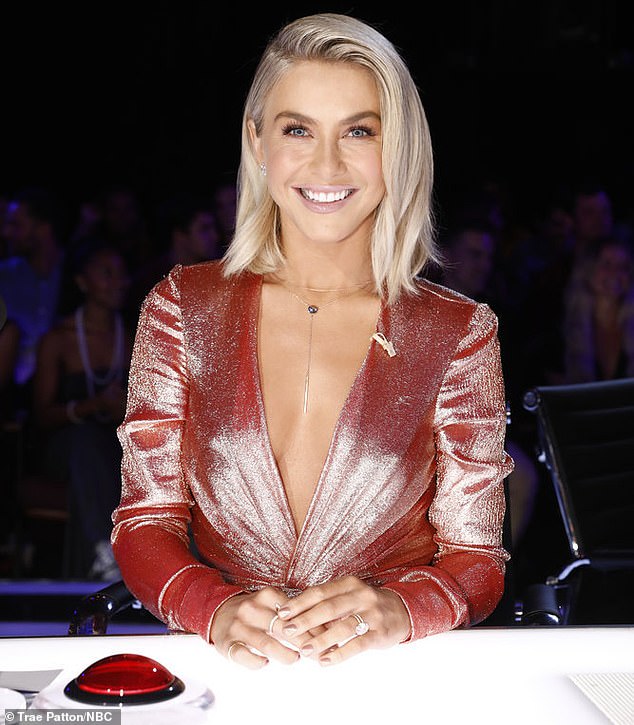 New judge: Julianne Hough joined season 14 of AGT as a judge and a Tweet made fun of her hairstyle choice earlier this season

He pronounced it ‘raymen.’

‘I’m English,’ Simon offered, after Howie asked if he’d ever had ramen. 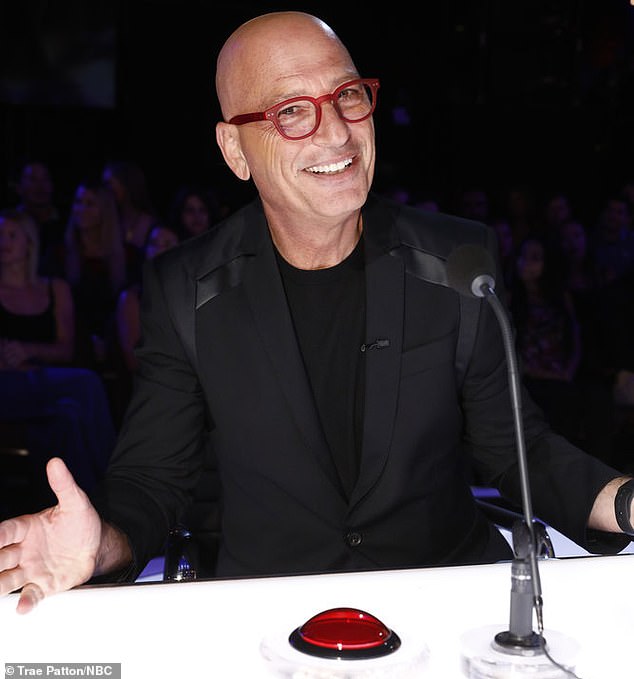 In the next round, magicians Dom Chambers, 26, and Eric Chien, 22, faced off against acrobat Matthew Richardson, 33, whose act found him spinning around inside a giant Cyr wheel in a pool of water.

Eric, whose performance Tuesday saw him turning candy into Rubik’s cubes, solving them, then turning them back into candy, was America’s choice.

‘I’m really happy that America voted for me,’ the ‘nervous’ magician said. 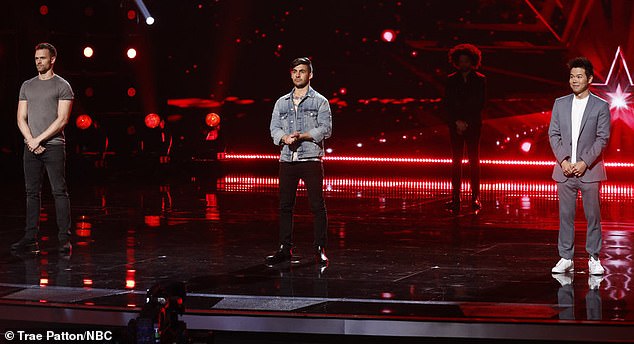 Viewer voting: Matthew, Dom and Eric met up on center stage to learn if they would advance

‘I don’t know how you did what you did,’ mused Julianne, who had been his assistant.

She urged him to keep using small objects in his performance, if that worked for him. 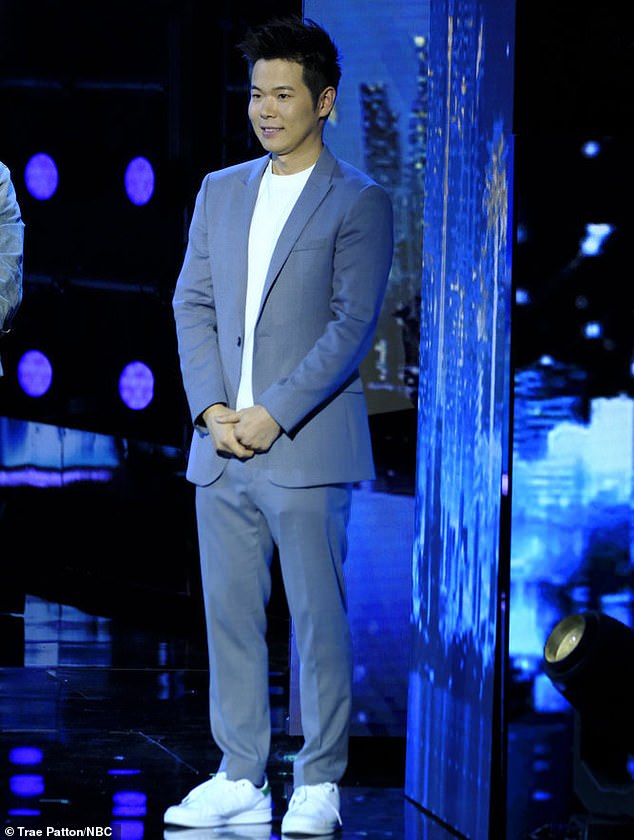 Next round: Eric, whose performance Tuesday saw him turning candy into Rubik’s cubes, solving them, then turning them back into candy, was America’s choice to move forward

Terry then revealed that Dom would also be going through. 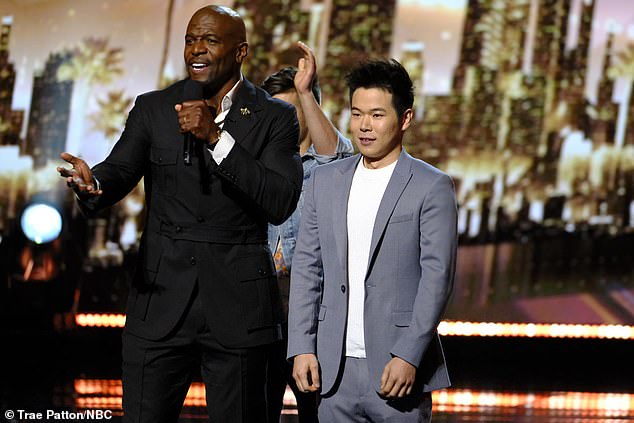 Go bigger: Julianne advised Eric to keep using small objects if it worked for his magic act, but Simon urged him to ‘go bigger’

The magician pulled off his own spectacular set on Tuesday’s show, getting the entire audience to choose the same person from a screen featuring 12 different faces.

‘I’m a little lost for words,’ Dom gasped. ‘Thank you so much for having faith in me and for putting your votes through.’

After Dom’s set, Simon had said that the young man gave his ‘best performance by miles.’ When the decision was made, he added that he felt Dom made a big impression with his work. 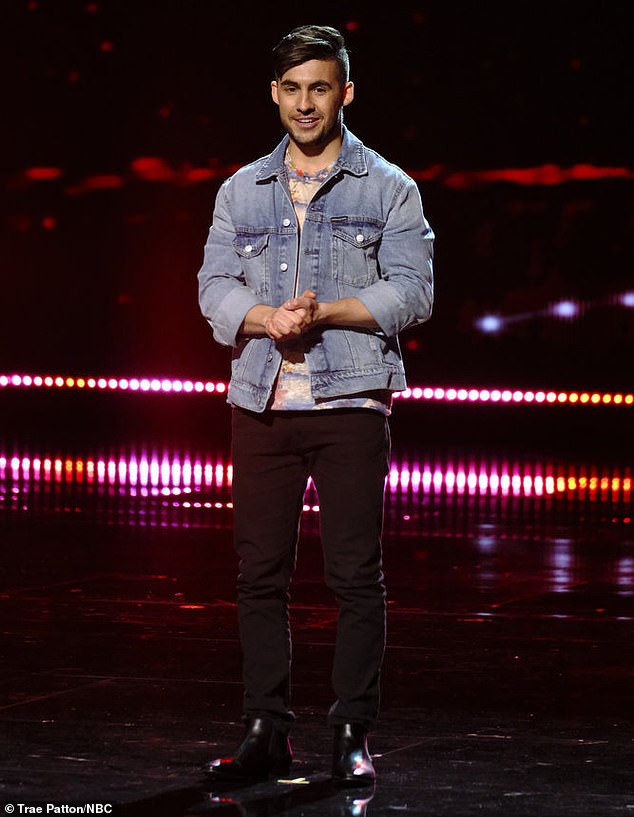 So did judge Gabrielle Union, 46.

‘There is a world that is big enough for both you and Eric Chien to succeed,’ she opined.

Two singers were up next, with Mackenzie going head-to-head with Benicio Bryant. 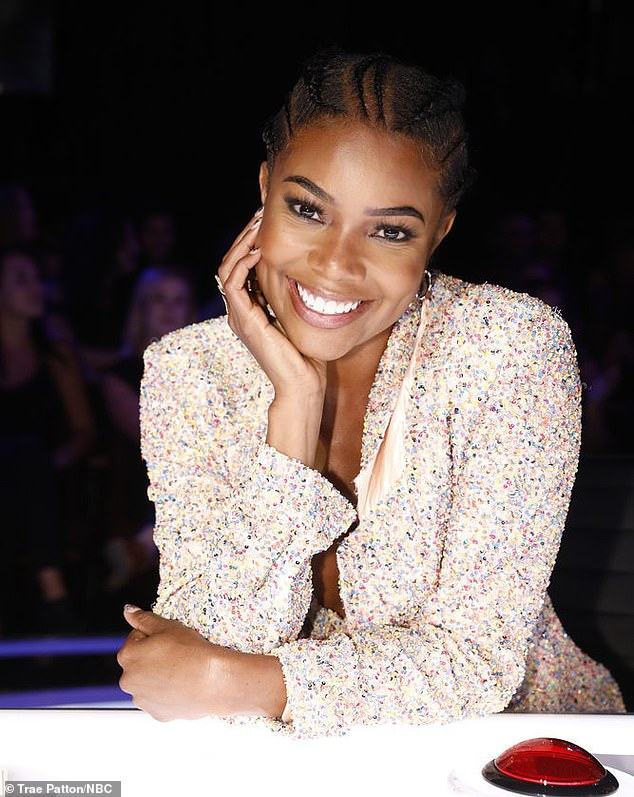 Big world: Gabrielle Union said the world was big enough for both magicians Eric and Dom

Mackenzie, who had sung David Bowie’s Life On Mars in the quarterfinals, lost out to Benicio, who performed an original song that had Gabrielle calling him ‘a rock star.’

The 14-year-old singer covered his mouth in surprise when he won. He said that he would take the judges’ comments about his performance under advisement as he tried to grow.

Waiting backstage were three performers whose fate was up in the air: guitarist Marcin Patrzalek, 18; dog act Lukas & Falco, ages 22 and nine; and comedian Jackie Fabulous, 48. 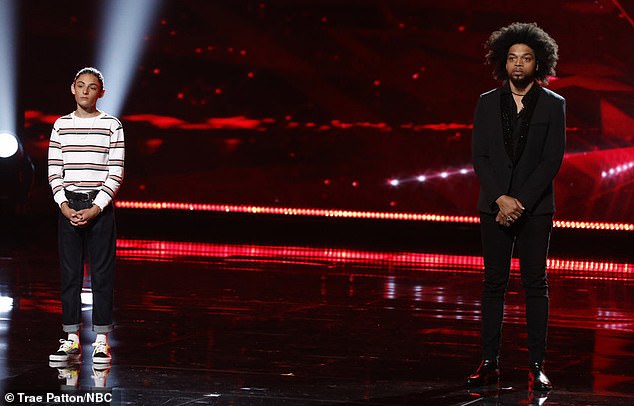 Talented singers: Benicio Bryant and MacKenzie were pitted against each other

Host Terry asked them how they felt.

‘It’s extremely nerve-wracking situation, to be honest,’ said Marcin. ‘I never expected for this to be real, but now it is, and I just hope that America appreciates what I do, you know?’

‘I have so much mixed feelings, but I hope America is going to vote us through,’ Lukas agreed. 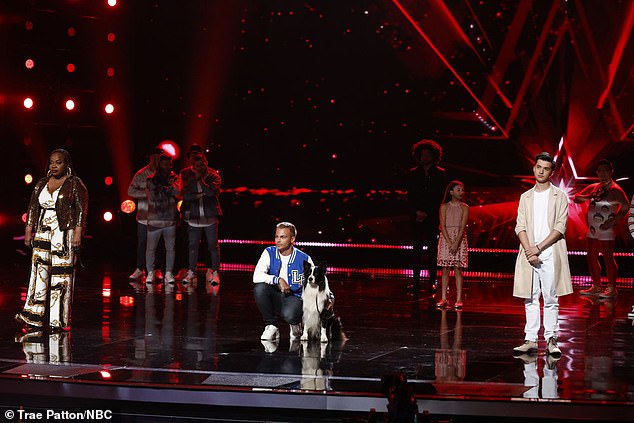 Live vote: Jackie, Lukas & Falco and Marcin awaited the results of the live Dunkin’ Save vote

In the end, America saved Jackie.

‘America was right: You are fabulous,’ Howie told her, revealing that he’d been surprised she even found herself up for elimination. ‘I love you, and I love that comics are going far.’ 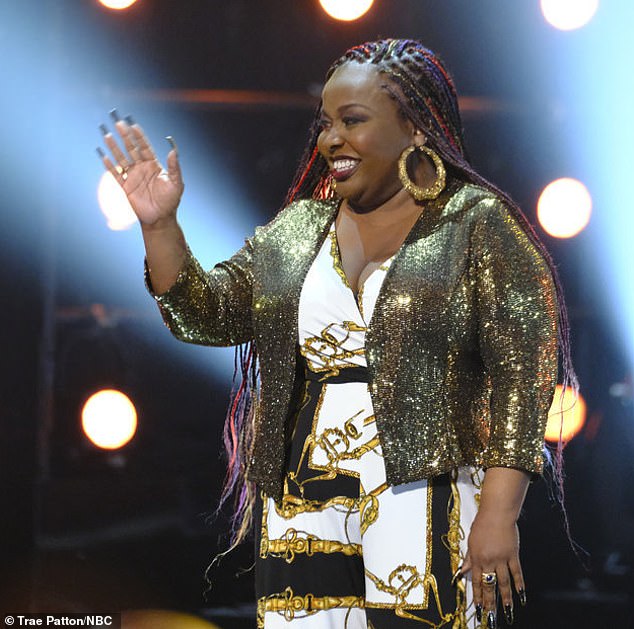 Fan favorite: Viewers who voted during the one-hour show chose Jackie to advance

The judges then had to decide which of the other two acts would go through.

‘I’ve just got to go with my gut,’ Howie continued. ‘I’m going to go with something I’ve never seen before, that’s unique: Marcin.’

‘Marcin, you’re a genius,’ Gabrielle admitted. ‘I have to go with the once-in-a-lifetime, once-in-a-generation talent, and that is Marcin.’ 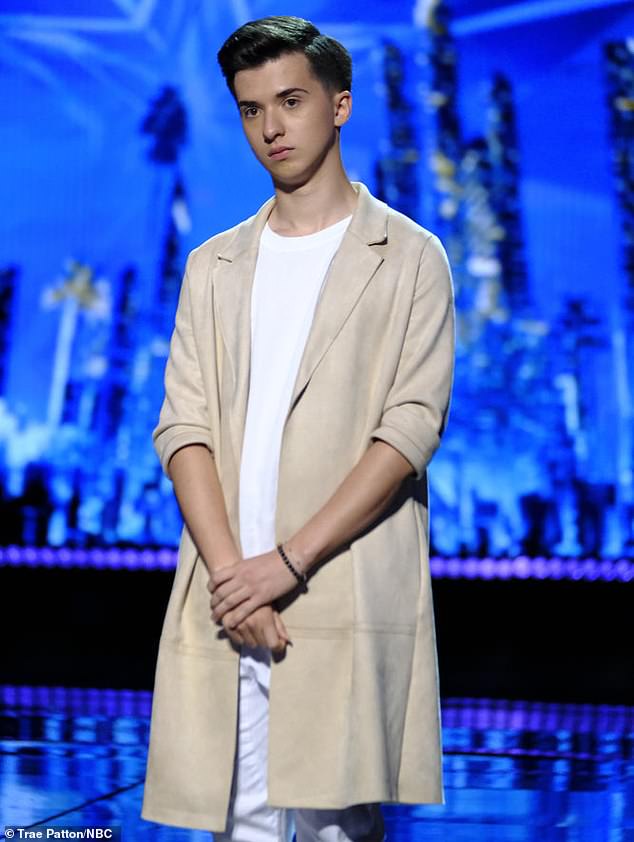 Guitar guy: Marcin was praised by Howie, Gabrielle and Simon before they voted for him to go to the semifinals

Simon, the last vote, called Marcin’s song choice ‘horrendous,’ but volunteered that he had a chance at winning AGT, ‘which is why I’m going to choose you to go through.’

And with that, Marcin earned the last spot in the semifinals.

America’s Got Talent will return Tuesday with the semifinalists performing. 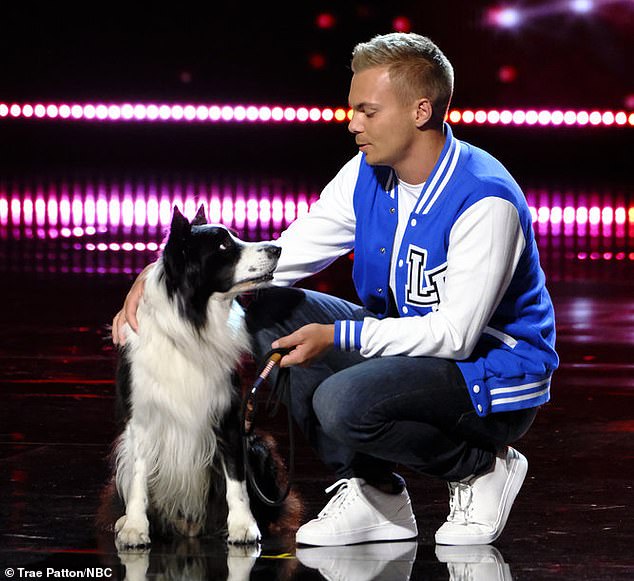 Dog act: Lukas & Falco were eliminated after the live Dunkin’ Save vote 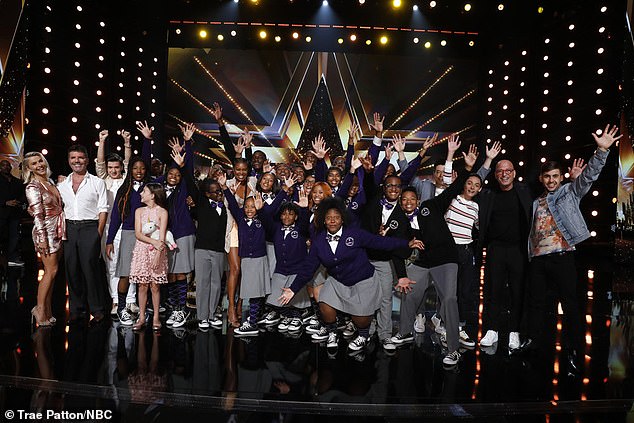 Semis next: The judges joined the seven acts headed to the finals for a group photo