American Paralympian Kendall Gretsch dramatically won gold in the women’s individual PTWC by overtaking Australia Laura Parker on the line – who had led for the entire race.

Gretsch was 25 seconds behind leader Parker going into the final kilometre of the para-triathlon race but miraculously clawed her way back to snatch the gold medal by just a single second.

The 29-year-old has now become just the fifth American to ever win a gold medal at both the winter and summer Paralympic Games and was delighted following the sprint finish at the Odaiba Marine Park. 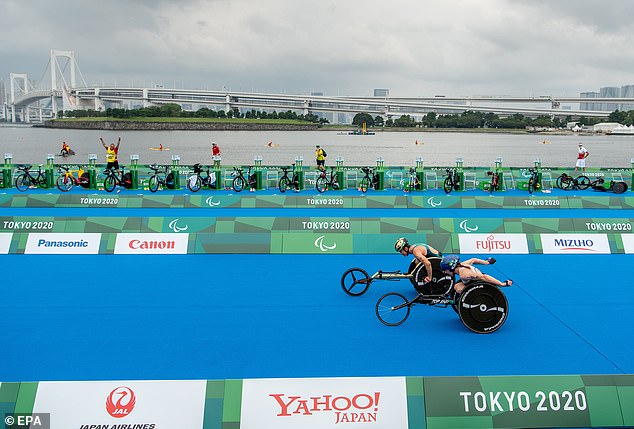 ‘I couldn’t see her in front of me until halfway through that lap,’ said Gretsch.

Silver medallist Parker said she could not have done anything more: ‘I put my head down and went for it. I’m pretty proud of my efforts.’

After the first swimming leg, Gretsch was in sixth place and nearly three-and-a-half minutes behind Parker out in front, before an incredible cycling effort moved her up into second. 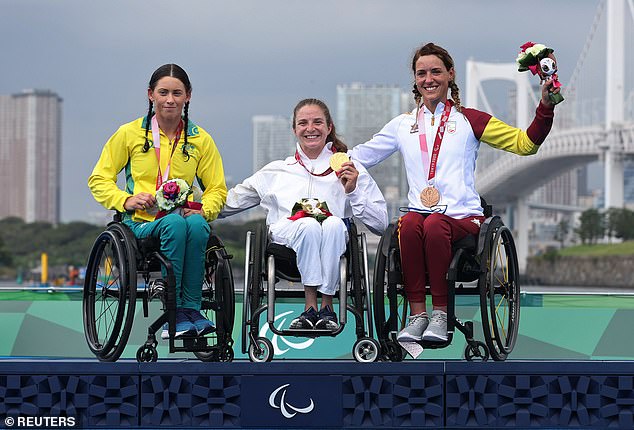 She then forced a sprint finish at the line after Parker suffered from backmarker problems as the home straight neared.

Gretsch began her Paralympic career as a cross-country skier in the Winter Olympics, winning two gold medals in the 2018 Games in Pyeongchang, South Korea. The 29-year-old also won six world championship medals in 2017.

She took up skiing, rather than her main sport as para-triathlon, as her wheelchair class was not picked as a Paralympic category until these Games.

Gretsch made the switch for the Tokyo Games and how has a gold medal in only her second Paralympic cycle.