U.S. voters are segmented into nine political tribes – four that lean left, four that lean right, and the ‘stressed sideliners’ who have a minimal interest in politics – according to a report released Tuesday by the Pew Research Center.

Pew surveyed 10,221 adults this July, but has been conducting interviews  with respondents since January 2020.

While partisan polarization remained high, the research also showed that there are divisions within both the Democrats and the Republicans – as members’ views vary on issues including racial justice, abortion, taxes and the future role of former President Donald Trump. 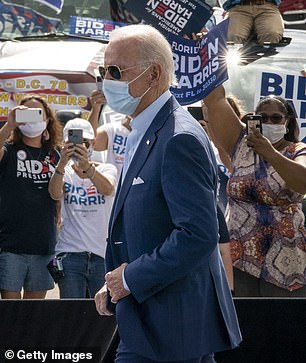 Pew Research Center found that Americans make up nine different political tribes, according to a survey conducted in July, but with interviews starting back in January 2020 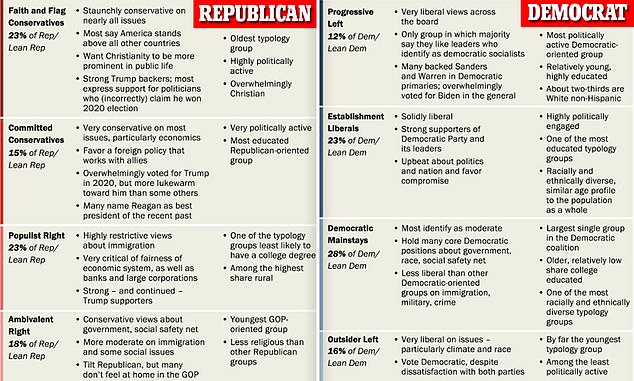 The Pew Research Center released a report Tuesday that put Americans into nine political groups – four that lean left, four that lean right, and the ‘stressed sideliners,’ who have a minimal interest in politics 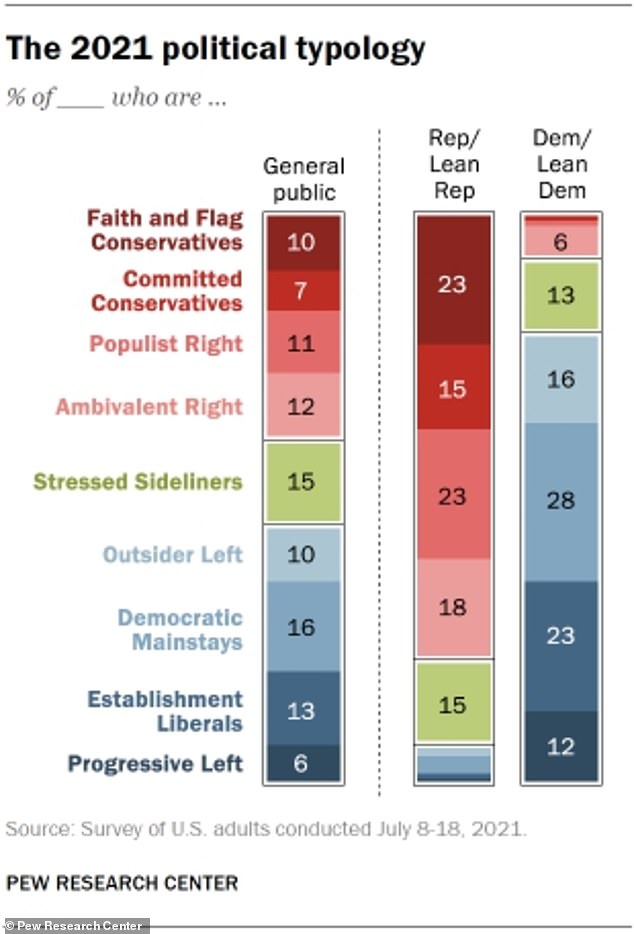 This group is ‘intensely conservative in all realms’, according to Pew. They make up 23 per cent of Republicans and independents who lean Republican, making them one of the two largest GOP-leaning groups. They are majority white and Christian. They’re more likely than other groups to argue that government policies should support religious values. They’re also less likely to believe in compromise in politics. Most say that Trump is probably the winner of the 2020 election, believing the so-called ‘big lie.’ Pew found that 79 per cent of this group believes too much attention has been paid to the January 6 Capitol attack.

This group holds views that are similar to the ‘flag and faith conservatives’ but with, as Pew put it, a ‘softer edge.’ They account for 15 per cent of Republicans and independents who lean GOP. They are pro-business and pro-small government. They would be more likely to support an immigration compromise than flag and faith conservatives and members of the populist right. They also believe the U.S. should prioritize relationships with foreign allies. While members of this group voted for Trump, they’re not as enthusiastic about him – preferring former Republican presidents like Ronald Reagan. 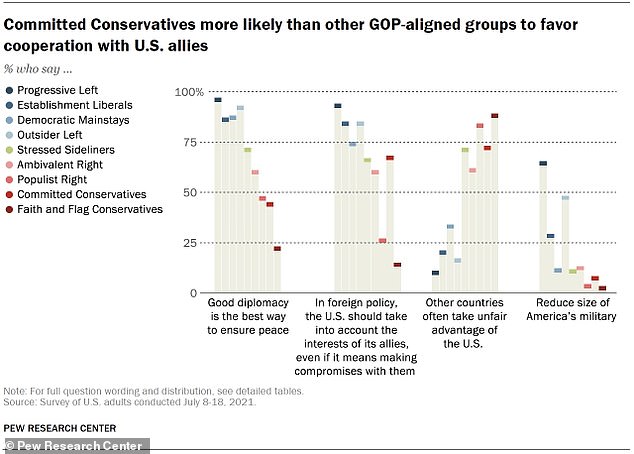 ‘Committed conservatives’ are more likely  than other GOP groups to believe that the U.S. should look out for its foreign allies 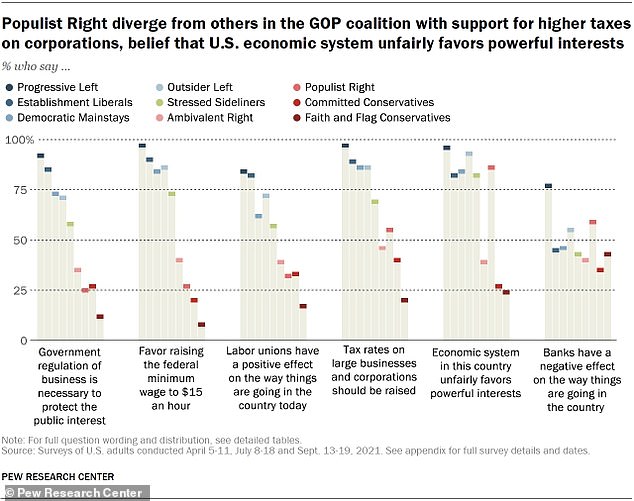 The ‘populist right’ is more likely than other GOP groups to believe that the economic system in the U.S. is unfair

This group tends to be less educated than other groups with members often living in rural communities. It also accounts for 23 per cent of Republicans and GOP-leaning independents. They are highly critical of U.S. immigration policy and also U.S. corporations. They are the only Republican group that argues the economic system in the U.S. unfairly supports powerful interests. They believe, which is something that Democratic President Joe Biden has proposed, that taxes should be raised on Americans making more than $400,000. Eighty-one per cent of this group told Pew pollsters they’d like to see Trump remain a prominent political figure.

This group is the youngest set of conservative-leaning voters. They hold traditional conservative opinions on issues such as favoring small government, the economic system, as well as race and gender. However, they’re more likely to support the legalization of marijuana and support abortion rights and same-sex marriage. While a majority voted for Trump in the last election, 63 per cent say they don’t want to see him continue to be a major political figure in the Republican Party.  A quarter of this group identifies as Democrats or Democratic leaners, while it makes up 18 per cent of Republicans and GOP-leaning independents. 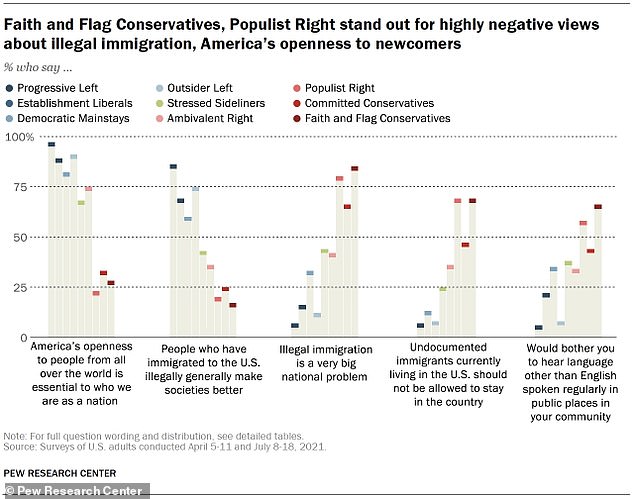 Faith and flag conservatives as well as members of the populist right tend to be immigration hardliners, the Pew research showed 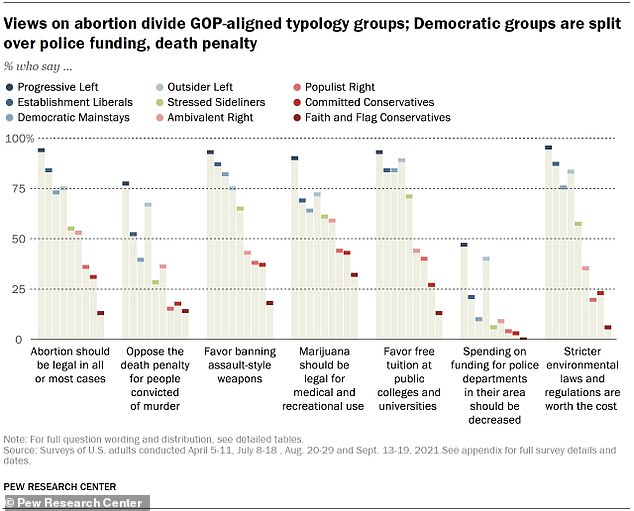 The ‘progressive left’ is the only majority white group of Democrats. They make up 12 per cent of Democrats and independents who lean Democratic. They have very liberal views on nearly every issue. They differ from what Pew calls ‘establishment liberals’ because they support sweeping changes to address racial injustice. They want a big expansion of the social safety net. They’re the most politically engaged of the Democratic groups.

‘Establishment liberals,’ on the other hand, are very liberal – but they’re more resistant to sweeping change, instead supporting incrementalism and political compromise. A majority believe the party should be inclusive of those who believe GOP viewpoints on some issues. They account for 23 per cent of Democrats and Democratic-leaning independents, Pew found.

This is the oldest, on average, group of Democrats, who are loyalists to the party, and are more moderate on some issues. They’re less likely than other Democratic groups to be college-educated. They account for 28 per cent of Democrats and Democratic-leaning independents. They may personally identify as politically moderate. Most of their views are liberal, however. On immigration, they may view illegal immigration as a bigger problem than other Democratic-leaning groups. They are also more pro-military. Forty per cent of black Democrats are included in this group. 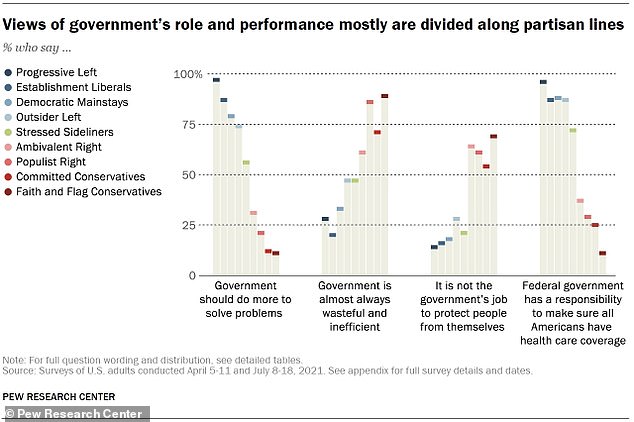 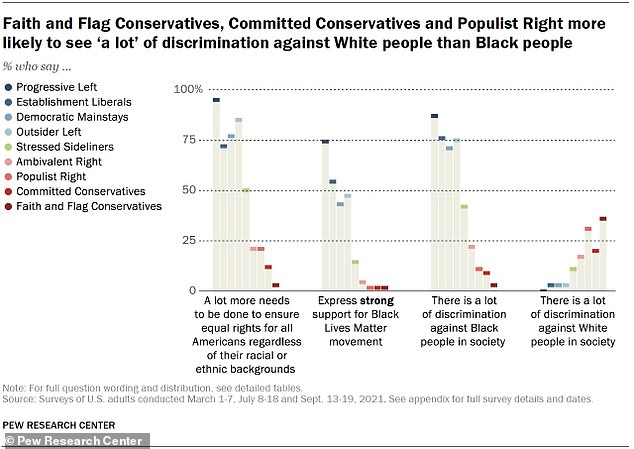 There’s a big split, as well, between the parties when it comes to discrimination against black people and white people

This is the youngest group of Democratic voters. They account for 16 per cent of Democrats and Democratic-leaning independents. They supported President Joe Biden in the last election, but are deeply frustrated with the political system, including the Democratic Party. They are liberal, especially on the issues of race, climate change and immigration. They often consider themselves to be political indepedents. They don’t vote reliably, but will choose a Democrat over a Republican candidate.