America’s top naval commander in Asia has requested an extra $20billion from congress to take on China after the Chinese navy ramped up military operations in the South China Sea.

The $20billion requested by Admiral Phil Davidson, chief of the United States Indo-Pacific Command, would go toward a missile shield to intercept attacks on the US island territory of Guam; a bolstering of Taiwan’s missile systems to deter invasion; and a cash injection for allied operations in the region.

The request, made to congress in a report titled Regain the Advantage, comes shortly after Washington accused Beijing of what it said were hostile actions in the South China Sea amid the global coronavirus pandemic.

Pictured: An undated file photograph of Admiral Phil Davidson, chief of the US Indo-Pacific Command, who has asked congress for $20billion to combat China’s military in the South China Sea 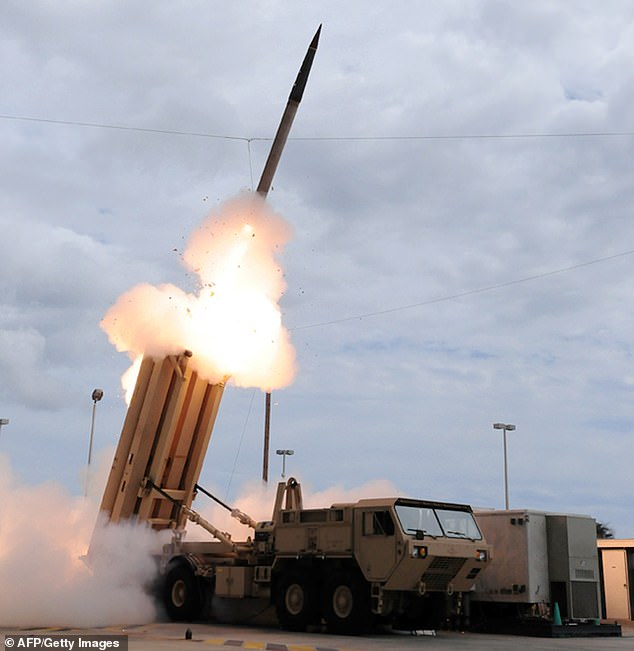 A handout image shows a missile launch on the US territory island Guam in 2013. US naval commander Admiral Phil Davidson has requested $20billion from congress, some of which would be designated for a missile shield on Guam

As Washington tries to curb the spread of the coronavirus domestically, which has killed over 10,000 people in the US as of yesterday, China has resumed operations in the disputed territory, sinking a Vietnamese fishing boat and bolstering its military installations.

On the English-language version of the Chinese military’s website, a post from earlier this month reads: ‘The Chinese People’s Liberation Army (PLA) Navy conducted combat-oriented drills featuring surface vessels, submarines and fighter jets in the South China Sea in late March, a month in which the US frequently sent warships and warplanes to intrude the waters.’

The ‘intrusion’ perceived by China was the passing of the USS Theodore Roosevelt aircraft carrier through disputed waters on its way to Guam.

While the US did not respond directly to Beijing’s allegations,  State Department Spokeswoman Morgan Ortagus condemned the ramming and sinking of a Vietnamese fishing vessel near the contested Paracel Islands. 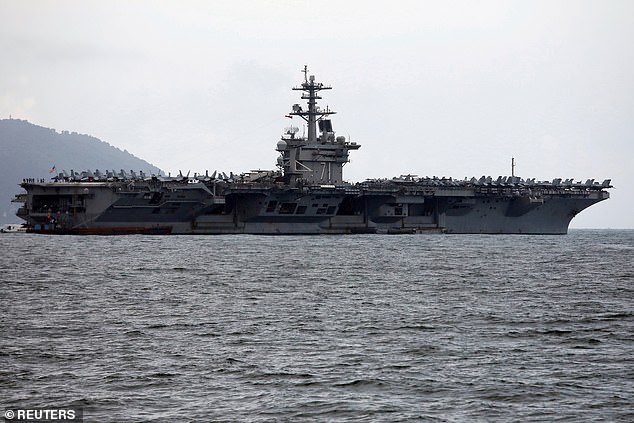 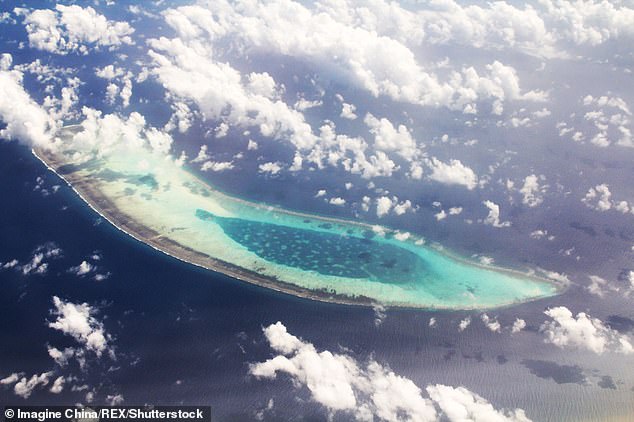 Pictured: A 2010 aerial view of the Paracel Islands, a disputed territory in the South China Sea 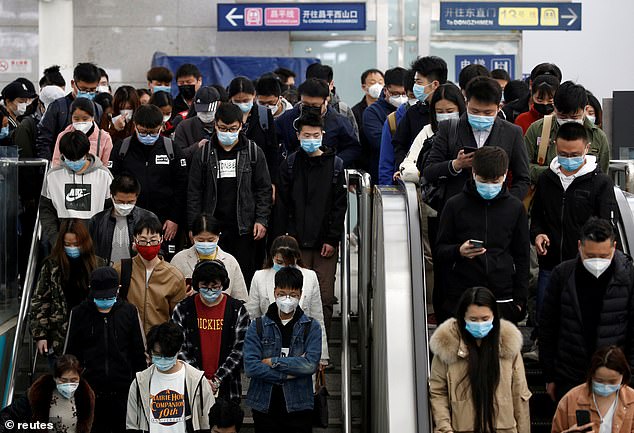 Beijing claimed the boat sank when it collided with one of their coast guard vessels after illegally entering Chinese waters.

Ortagus said that China’s hostile move was another attempt to contend its ‘unlawful maritime claims and disadvantage its Southeast Asian neighbors in the South China Sea.’

Since the outbreak of the coronavirus at the end of last year in Wuhan, China, Ortagus said, Beijing has also bolstered its military capabilities on the Fiery Cross and Subi Reefs, a series of military outposts in the waters.

‘We call on the PRC to remain focused on supporting international efforts to combat the global pandemic, and to stop exploiting the distraction or vulnerability of other states to expand its unlawful claims in the South China Sea,’ Ortagus said.

The strong words come amid rising anti-China rhetoric from the US for Beijing’s handling of the coronavirus outbreak. 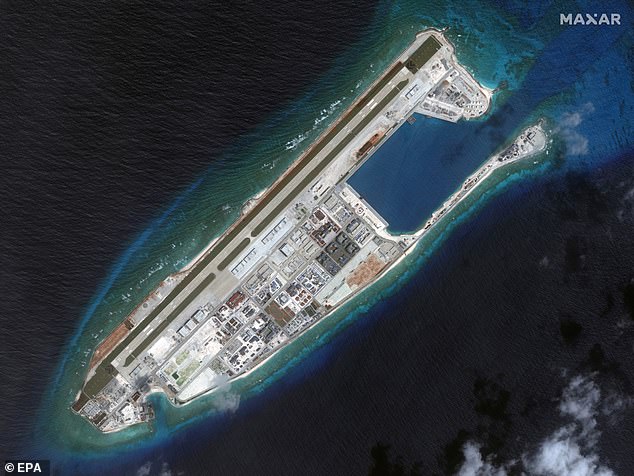 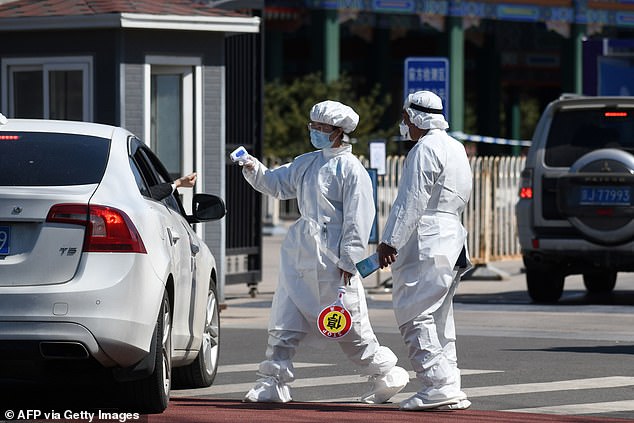 According to a US intelligence report leaked last week, the Chinese Communist Party is still lying about the true number of cases and deaths, which has led to an increasingly intense war of words between the two nations.

US Vice President Mike Pence last week blamed China, as well as the US Centers for the Disease Control and Prevention, for the United States’ slow response to the global crisis.

He told CNN’s Wolf Blitzer: ‘I will be very candid with you and say that in mid-January the CDC was still assessing that the risk of the coronavirus to the American people was low.

‘The very first case which was someone who had been in China, I believe, took place in late January around the 20th day of January.’ 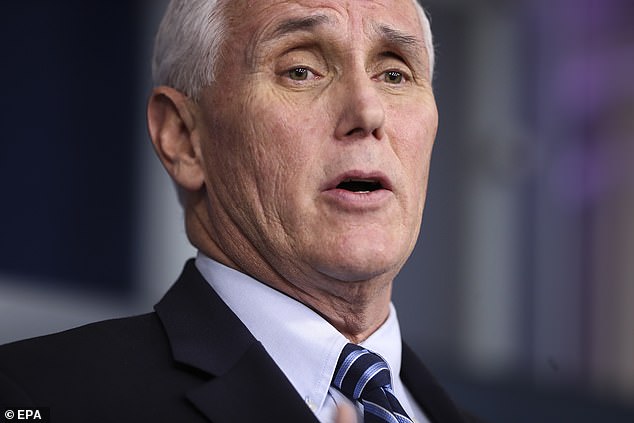 Pence told CNN on Wednesday: ‘The reality is that we could have been better off if China had been more forthcoming. I mean the reality is that China’s been more transparent with regard to the coronavirus than certainly they were for other infectious diseases over the last 15 years.’

He added: ‘The reality is that we could have been better off if China had been more forthcoming.

‘I mean the reality is that China’s been more transparent with regard to the coronavirus than certainly they were for other infectious diseases over the last 15 years.

‘But what appears evident now is that long before the world learned in December that China was dealing with this, and maybe as much as a month earlier than that, that the outbreak was real in China.’