Amy Hart has revealed that she was shocked to discover that NHS nurses were among those cruelly trolling her on social media.

The Love Island star, 28, said lockdown had given her time to look at the profiles of the people sending her mean jibes.

Shock: Amy Hart has revealed that she was shocked to discover that NHS nurses were among those cruelly trolling her on social media as she spoke on a Cambridge Union panel last week

The blonde bombshell, who appeared on the reality show in 2019, told the audience: ‘I 100 per cent think accounts should have to be linked to a real person,

‘I’ve had really awful comments from people and we’re in lockdown – I’ve got a lot of time on my hands.

‘So I’ve set up a Facebook and started searching these people. And they’re all like nurses and stuff. What are you doing? One said I had awful legs.’

‘I hope she doesn’t go to her patients and say “Madam, you’ve got awful legs. We can’t do your blood pressure today because you’ve got bingo wings”.’ 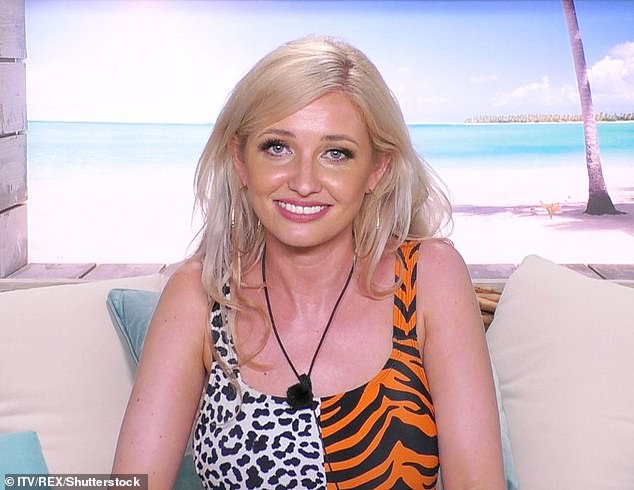 ‘I’ve had really awful comments’: The reality star said lockdown had given her time to look at the troll’s profiles and she discovered that many were healthcare workers (pictured on Love Island in 2019)

The former air hostess – who quit the show after getting her heart broken by Curtis Pritchard,  spoke alongside fellow contestants Yewande Biala, 25, who was in the same 2019 series, and Rosie Williams, 29, who was on the 2018 show.

Amy Hart also revealed during the panel discussion that her parents were warned about ‘harrowing’ scenes she had filmed during her stint on Love Island.

Amy explained: ‘They are in constant contact with your family as well so they would call my parents and say, “Okay so tonight’s episode, you are going to find it quite harrowing but I am in the gallery now, I’m looking at Amy, she’s with the girls and she is fine”.

‘But I just thought, it’s hard for us to live it, it must be so hard for our parents to watch it.’

Amy then joked: ‘Turns out my mum and dad were hanging out with Phil and Holly so they weren’t actually that bothered.’

The blonde beauty suffered a tumultuous time during her stint on Love Island in 2019 and was unceremoniously dumped by ‘half boyfriend’ Curtis, 25, when he developed feelings for other women during the Casa Amor segment of the show. 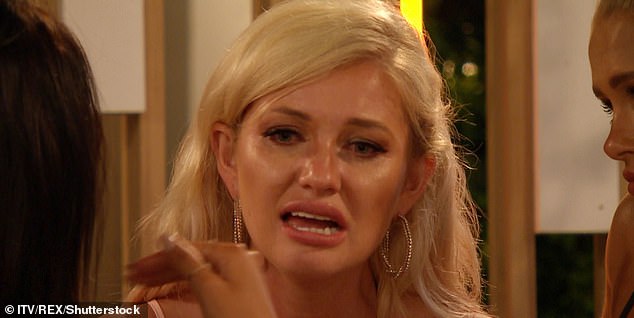 Difficult: Amy also revealed during the panel discussion that her parents were warned about ‘harrowing’ scenes she had filmed during her stint on Love Island

The former British Airways cabin crew member won the heart of the nation when she bowed out of the ITV2 reality series with a dignified speech after being one of the original Islanders.

Amy and Curtis’ rollercoaster of a relationship had heated up very quickly, with them becoming the first couple to spend the night in the hideaway during night nine.

But in the lead-up to her exit Amy spent much of the episodes in tears after Curtis had said he didn’t want to give their romance another chance and couldn’t promise he wouldn’t have his head turned again, like he did by Jourdan Riane.

Amy had remained loyal while in the Casa Amor villa and revealed to pal Molly-Mae Hague that she’d fallen in love with the professional dancer, telling her that Curtis was her ‘best friend and boyfriend rolled into one.’ 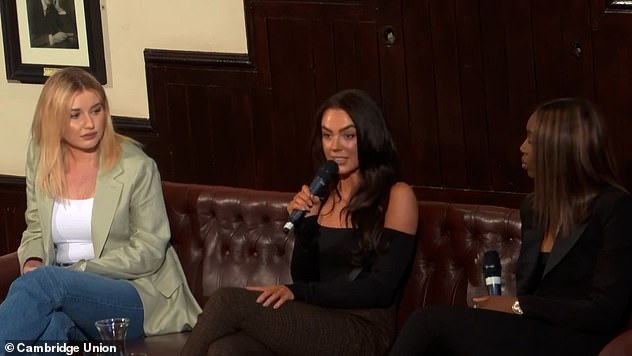 But during the next recouping Curtis shocked the other stars and viewers at home when he admitted he’d been ‘lying’ to himself over his relationship with the bubbly blonde- with Amy then bounding into the villa and gushing that she’d missed him.

Amy was devastated when Curtis told her what had been going on, with her declaring that she had been intending on telling him she ‘loved him’ on her return.

The next day, Amy was dealt a further blow when Curtis couldn’t promise he wouldn’t hurt her again, with Amy branding him a ‘compulsive liar’.

Fans had raised concerns for Amy’s mental health at the time the show aired after she broke down in tears following the dancer’s betrayal in devastating scenes, with the dramatic recoupling sparking nearly 200 Ofcom complaints. 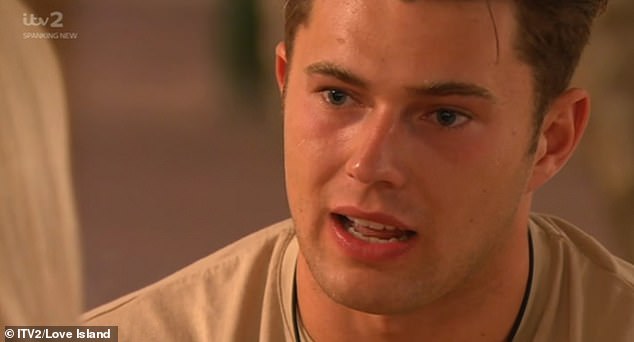 Savage: Amy was unceremoniously dumped by ‘half boyfriend’ Curtis, 25, (pictured during the 2019 series) when he developed feelings for other women during the Casa Amor segment

Amy announced she’d quit the show soon after, with a source telling The Sun at the time that she’d had her ‘heart broken’ and ‘couldn’t stand the thought of seeing Curtis crack on with other girls while under the same roof as her’.

Curtis went on to finish the show in fourth place alongside Irish grid girl Maura, then 29, after they got together following Amy’s departure. They split in March 2020.

Elsewhere during the mental health chat on Wednesday, Rosie recalled how she had to get off set quickly following a challenge where Adam Collard had to put make-up on her whilst blindfolded, which she said made her feel ‘completely humiliated’.

She told students at Cambridge University: ‘I could feel I was at breaking point, you know at that point, when you are doing the challenges you know you’re being filmed and I felt the whole world – well not the whole world – the whole nation is seeing me being completely humiliated by this guy.

‘All I can do is let him do it as we were in the middle of a challenge. I just remember saying ‘you need to get me out of here and get me off the set’.’

Rosie added: ‘That was the day I went and spoke to somebody about what was going on. It takes you getting to breaking point to say ‘I need help, I need to speak to someone.” 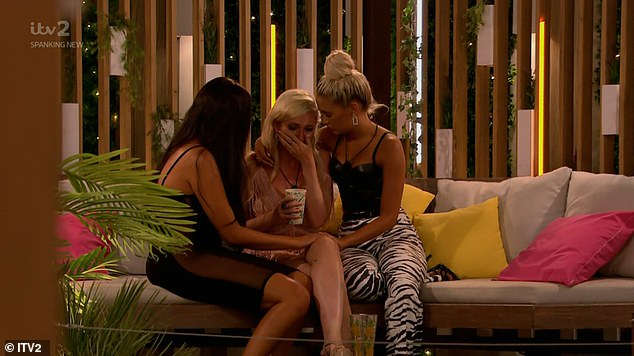 Crushed: Amy was comforted by Molly-Mae and Maura, who made a move on the dancer herself, after Curtis shockingly told her he didn’t want to give their romance another chance