Amy Winehouse’s former husband has today been arrested on suspicion of arson after setting fire to his 7th-floor flat.

The singing star’s ex then walked away to smoke more drugs leaving residents of the 16 storey Gamble Hill Croft, in Leeds, West Yorkshire, to rouse other tenants and evacuate the immediate flats.

One resident said: ‘Blake didn’t care what he’d done. He thought it was funny, but all we could think about was Grenfell.’

Troubled Blake Fielder-Civil, 37, left his council accommodation laughing and told terrified neighbours ‘I’ve set fire to my curtains’ (pictured, a man, thought to be Fielder-Civil, is led to an ambulance by police outside the property) 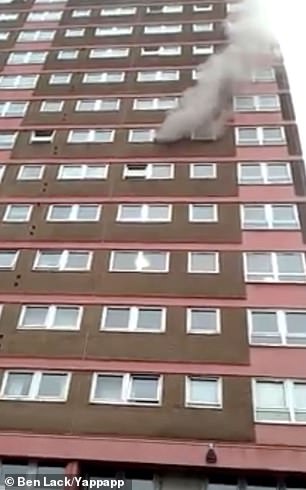 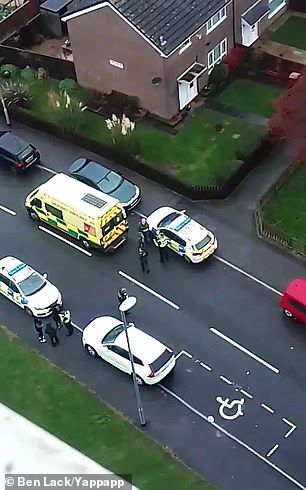 Emergency services were sent to the property at Gamble Hill Croft, in Leeds, West Yorkshire, at around 8am this morning (right, police and ambulance at the scene). Residents said the sprinkler system is switched off at the moment and it did not activate (right, smoke issuing from the property during the fire)

Ms Howard said: ‘We could feel the heat through our bedroom wall, it was red hot.

‘And then another neighbour came braying on our door shouting that there was a fire.

‘We have come out and seen and smelt the smoke and seen Blake just standing outside on the landing.

‘Blake said “it’s only a bit of smoke. I have set my curtains on fire” and then he just laughed.’

The couple said Blake was ‘off his face’ on drugs and he was more concerned about getting more high than raising the alarm.

Blake asked the Howards ‘Are you coming to smoke this crack pipe?’ before walking up to the ninth floor, leaving his flat ablaze and others to call the fire brigade.

‘He was not at all sorry for what he’d done and did nothing to try and help people escape,’ said John.

‘It was the fire brigade who actually located Blake before the police arrived and arrested him.’ 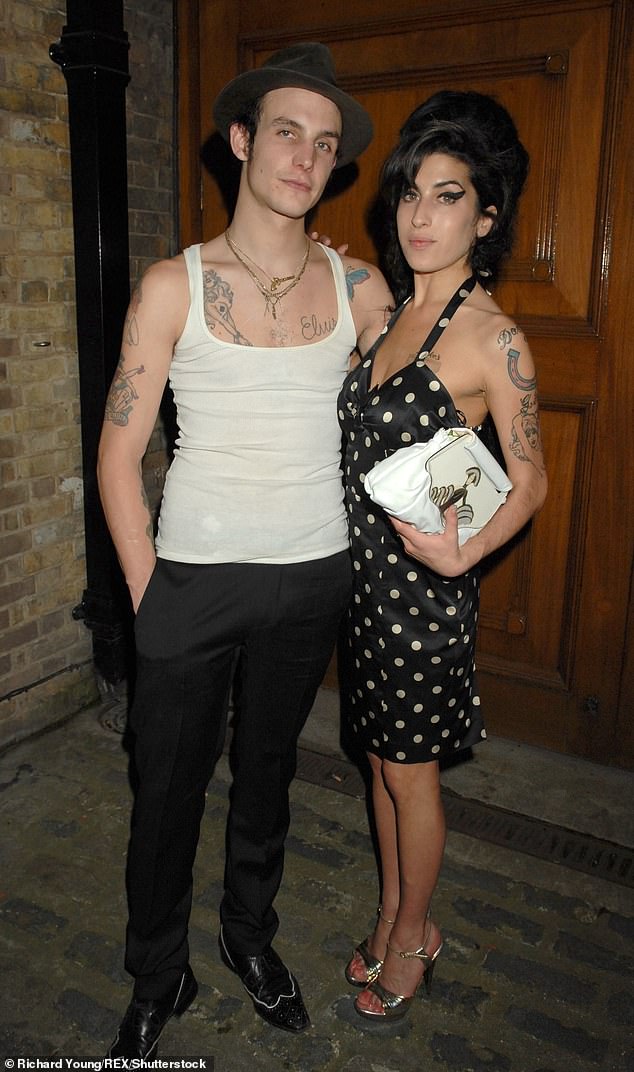 Amy Winehouse and husband Blake Fielder-Civil in 2007. A police officer is today standing guard outside Blake’s soot blackened flat and the smell of smoke hangs in the air

Locals said Blake is often ‘off his noodle’ on drugs and is a problem resident in the block, which is owned by Leeds City Council Housing, but this is the worst incident.

‘I hope they lock him up and he doesn’t come back,’ said John.

Residents said the sprinkler system is switched off at the moment and it did not activate.

‘We could have been looking at another Grenfell here,’ said a resident of the floor above Blake’s flat.

A West Yorkshire Police spokesman said: ‘At 9:02am today (26/11) police were contacted by the fire service who were attending a fire at a flat in Gamble Hill Croft, Leeds.

‘Officers attended and arrested a man on suspicion of arson. He was taken to hospital as a precaution for suspected smoke inhalation before being taken into custody.’

West Yorkshire Fire and Rescue Service also confirmed it had been sent to the scene. A spokeswoman said the incident was over by 1.08pm and its vehicles had left the area.

A police officer is currently standing guard outside Blake’s soot blackened flat and the smell of smoke hangs in the air.