An Inspector calls… at The Pig at Harlyn Bay, the Cornish outpost of a shabby-chic hotel chain that can seemingly do no wrong

A young man wearing a beanie and his girlfriend in long skirt and woolly jumper are pulling a wicker cart along a gravel path. It could be a scene from the opening day of Glastonbury. There’s expectation, a sense of escape, strangers being nice to each other, all ages, a magnificent setting.

And, like Glasto, getting a ticket isn’t easy. The Pig at Harlyn Bay has been booked solid since its opening in July and forget it if you fancy a night over a Bank Holiday next year.

We grabbed a berth months ago and stayed last Sunday, arriving at 2pm (check-in is at 4pm). This allowed us to take a seat in the outdoor Lobster Shed for scallops and barbecued vegetables, followed by a walk along the coast from Harlyn towards Padstow.

Hot property: The Pig at Harlyn Bay in Padstow has been booked solid since its opening in July

Actually, we didn’t get far because champion surfers were out in force, riding some of the biggest waves I’ve ever seen and they deserved an audience.

Strolling back up the drive was thrilling. It’s an exceptional manor house that until The Pig came along had been in private hands since the early 17th century — and clearly much loved. It still is.

Loved and made even more ravishing following the deft and now famous shabby-chic touch of Robin and Judy Hutson, the group’s principal owners.

Their genius is to make everything look as if it’s been thrown together after dawn raids on salvage yards and dusty antique shops, when, in fact, the attention to detail is exemplary, the atmosphere laid-back but sharp, the staff bright and super-efficient. 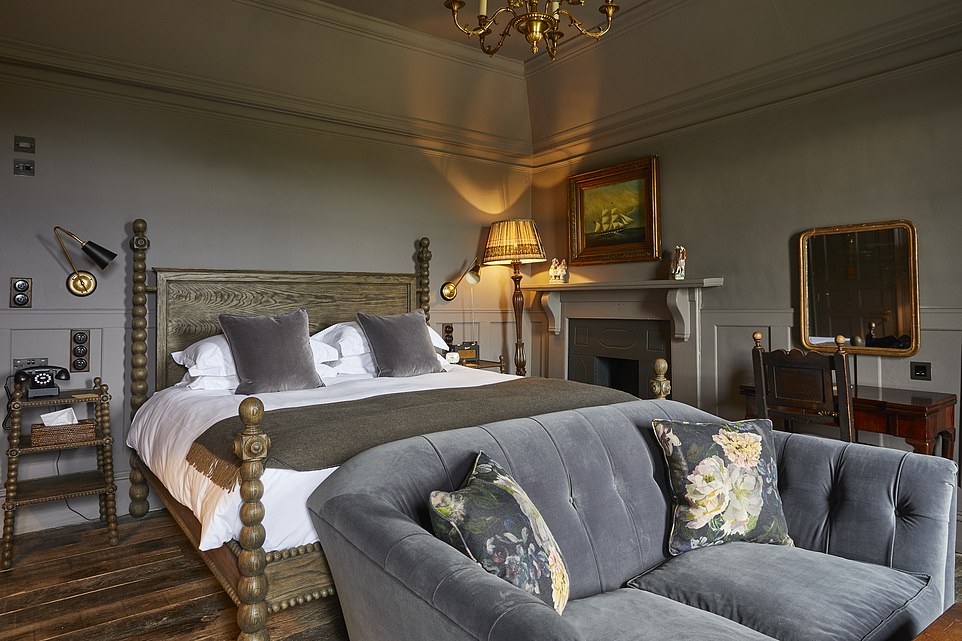 The Inspector liked the ‘shabby-chic’ interiors and said his room was ‘snug’. Pictured is one of the rooms

Colours are dark and moody, broken up by velvet sofas, upholstered armchairs, paintings on a nautical theme, all spread about in a series of downstairs rooms, including one with a chest that has been turned into the bar; another with an inglenook fireplace.

Our bedroom is snug, the bathroom reached up a couple of steps, with a battered mirror, freestanding bath under the window, separate shower.

Nothing grates; everything works. A child of three or a man of 103 could operate the light switches.

We eat in an overflow tented courtyard. Music comes from Canned Heat, Van Morrison, the Eagles and the Steve Miller Band.

We can’t resist a pre-starter of ‘fishy bits’, and my whole partridge is wonderfully succulent. All ingredients come from within 25 miles of the hotel.

It annoys some people that The Pigs don’t include breakfast — but you get a mighty feast for £20. Before leaving, we wander round the grounds and admire the shepherd’s huts, the walled kitchen garden, the views of the Atlantic ocean.

‘I think this is the best Pig of the lot [there are now six of them],’ I tell my wife.

‘You said that about the last one we stayed in,’ she says.