An Inspector Calls… A review of The Woburn Hotel, Woburn

During the early 19th century, there were some 27 inns in Woburn. There are still quite a few, of which the Woburn Hotel is by far the biggest, occupying a commanding position in the centre of this Georgian masterpiece of a town.

It was called the Bedford Arms until 2001, when the Duke of Bedford brought it back under the control of the estate. It’s now part of a huge commercial operation at Woburn Abbey, including a safari park, sculpture gallery, antique centre, adventure playground and golf course.

First impressions are that it feels like the clubhouse of the golf course, albeit a large one.

The Woburn Hotel is part of a huge commercial operation at Woburn Abbey, including a safari park, sculpture gallery, antique centre, adventure playground and golf course

There are some 50 rooms, including seven cottages near the car park. Ours is on the ground floor and it’s completely bereft of character or imagination. There is no view whatsoever and, horrors, the cupboard is full of those depressing anti-theft hangers.

Perhaps the bigger and more expensive rooms are an improvement on this. But everything is neat and tidy, and the staff are forever willing.

In the Tavistock bar, there is only one woman — and she’s with me. The atmosphere is muted, which is why we walk a few of hundred yards down the road for dinner at Fratelli, a traditional Italian recommended by a friend who lives locally.

We pop back into the bar for a night cap. The Polish barman is pleased with our choice of smokey single malt from Islay — and that we are there at all, this being a blustery and inhospitable night. 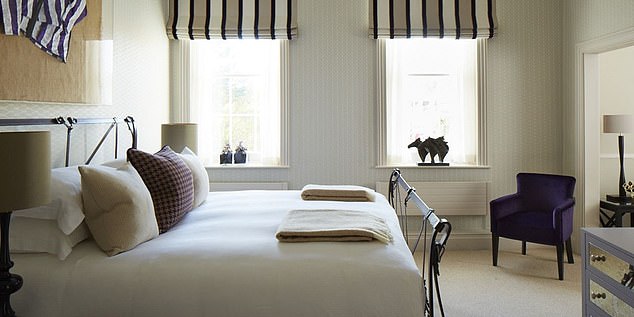 There are some 50 rooms, including seven cottages. Pictured above is one of the rooms

We see Oliver’s restaurant in the morning at breakfast. Just outside the room are two huge paintings of Woburn Abbey — built to the design of Henry Flitcroft around 1746 — showing the house in all its magnificent glory. Eggs, bacon, sausage, hash browns and, yippee, fried bread are keeping warm in huge stainless steel dishes. You help yourself.

‘Good luck with it all,’ says a friendly American woman as I fish out a fried egg swimming in oil. She’s referring to our country’s political predicament rather than wondering how I will get through everything on my plate.

It’s good to talk, I remind myself. And The Woburn is the sort of place where striking up a conversation with strangers seems natural.