An Inspector Calls at Brownsover Hall Hotel in Warwickshire

There are plenty of ghosts here. That’s what the friendly receptionist tells me in a nonchalant sort of way.

‘Quite a few in the main house. In particular the Grey Lady who goes up and down the main staircase,’ she says.

‘Then I want to be in the main house,’ I tell her, as if ghosts were an enviable extra at Brownsover Hall Hotel, a couple of miles outside Rugby in Warwickshire.

Spacious: One of the bedrooms at the Brownsover Hall Hotel in Rugby, Warwickshire

‘Sorry — but you have got a nice big room in the stables.’

So off I go to the stables where the room is big but not nice. It has ‘disabled access’ — nothing wrong with that but there are only so many coats of paint you can put on tongue and groove panelling around the bath before it’s time for a complete refit.

The whole confection is drab and faded. Mind you, this is a remarkable building. The original Brownsover Hall was demolished in the 1850s when then owner Sir John Ward-Boughton-Leigh commissioned Sir George Gilbert Scott — responsible for the famous hotel at St Pancras railway station in London — to design a new house in the Gothic Revival style. It was completed in 1857 and is really the St Pancras station hotel in miniature.

It became a hotel in the Seventies — the decade in which it is now firmly stuck, albeit the menu in the vaulted restaurant is mercifully free of Parma ham and melon.

I have a drink in the Sir Frank Whittle Bar (so named as Whittle stayed here while working on his jet engine), where three burly men are watching football on a wall-mounted screen. Even if the room was full of happy, chatty people I’m not sure the atmosphere would be any more bouncy.

I’m on the dinner, bed and breakfast rate of £164, which gives me a £25 food allowance. Which seems a touch mean when the cheapest steak is £22.

The waitress is either having a hard day or hates her job because not once do I spot a flicker of a smile. 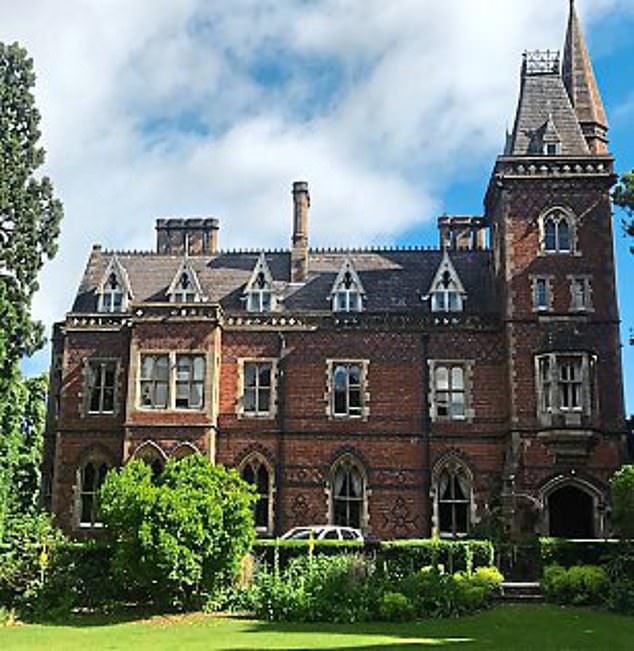 Things don’t look up much in the morning either. Two waitresses spend most of the time chatting to each other outside the room.

At one point I take my cup and saucer out to find them and ask for a refill.

The stainless steel trolley with compartments for fried eggs, baked beans, mushrooms, tomatoes, bacon, sausage and some delicious fried bread really is a ghost from the past.

On checking out I pick up a leaflet for a ‘clairvoyance evening’ with a £19.95 buffet thrown in. I wonder if the Grey Lady will look in.