Truro’s coat of arms shows a tin miner and a fisherman, in homage to the industries that made the city what it is today.

The mining has long gone, and the fishing is under threat, but, somehow, Truro rumbles on, with its mix of Gothic, Georgian and Victorian buildings, independent stores (a few, anyway) and John Loughborough Pearson’s cathedral with its three spires.

At the heart of it all is Mannings, a friendly Cornish hotel and restaurant that’s popular with locals, but will never win an award for cutting-edge design.

Mannings in Truro, Cornwall, has 30 rooms and nine apartments fronting a car park. The hotel  and restaurant proves to be a popular spot with locals

There are 30 rooms and nine apartments fronting the car park. Normally, there is a small charge for guests to park, but the bubbly woman who takes my booking is happy to waive this if I take an apartment, because all the rooms in the main building are booked. We agree on a reduced price of £115.

With its high-pitched roof and more work surfaces than in the kitchen of a four-bedroom house, a family would be fine here for a few days. As it is, businessmen apparently use it, happy to have a combination of self-catering and meals cooked for them.

The room is chilly and there’s a whiff of old shoes. By the time I sort the heating out, I arrive for dinner at 9.08pm, after being told I can order up until 9.15pm. The hotel may be full, but few people seem to be in the restaurant. Perhaps they eat early in Truro.

‘So sorry, but the chef has gone home,’ says the waitress. ‘But you can have soup and a sandwich.’

I huff and puff – not rudely, but enough to make my point. The manager appears and, bless her, lets me order some Indonesian starters, which are vaguely warm. She conscientiously hovers over me and, after I’ve eaten, escorts me back to my apartment. 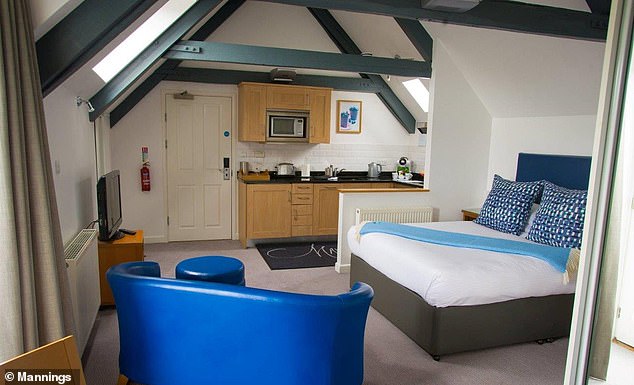 Waking up to a combination of seagulls and cathedral bells is a treat. So is the breakfast, if you eschew the dreary buffet and order a la carte.

Suddenly, I notice a waitress sitting at the next table to mine in a banquette, her head in her hands. She’s feeling queasy and a colleague has told her to sit down for a few minutes.

The manager arrives and offers to drive her home, which seems entirely in character with the spirit of Mannings. I’m not sure you would come here for a romantic break, but, if you happen to be in Truro and need to be looked after for a night, then this will do just fine.