Anarchists staged a protest today outside the flat that Carrie Symonds is ‘too scared to return to’ after her row with Boris Johnson which prompted neighbours to call police.

A group of people from Class War arrived at the apartment claiming Johnson wasn’t even fit to be a ‘Pie Minister’.

Two people stood on the steps outside Ms Symonds’s Camberwell flat holding up a banner that read: ‘We must devastate the avenues where the wealthy live.’ 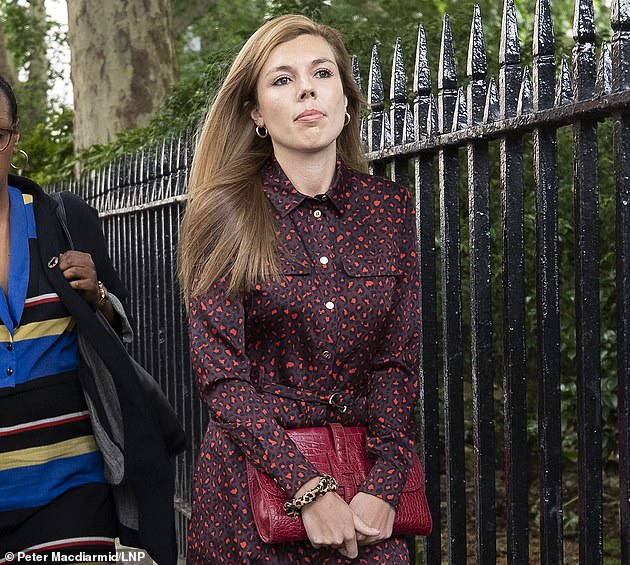 Carrie Symonds (pictured at his leadership launch earlier this month) is struggling after receiving hate mail at her flat in Camberwell, south London

The banner was emblazoned with the logo of anarchist group Class War – an organisation that originally started as a paper in 1982 but expanded into a political movement.

Ms Symonds was today reported to be ‘too scared to go home’ after she was recorded in a ‘political stitch-up’ by neighbours Eve Leigh and Tom Penn while she argued with her boyfriend Boris Johnson inside their flat.

Members of the anti-establishment group – including veteran protester Ian Bone, once described as ‘The Most Dangerous Man in Britain’ – turned up outside the Grade II Listed building just before 2pm today.

They said they wanted would-be Prime Minister Johnson out of Camberwell, and would be happy if he ‘left the planet’.

The veteran anarchists said they were sick of ‘old Etonians running the country’.

One of the Class War mob – holding a sign that read ‘Camberwell welcomes migrants not Boris’ – said she would be happy for the Tory leadership candidate to ‘leave the planet’.

Asked if she would like Mr Johnson to leave the area, she said: ‘Absolutely – I’d like him to leave the planet.

‘I want Boris out of Camberwell.

‘We don’t need old middle class white men telling us what to do.

‘Go back to Eton or Highgate or wherever it is white middle class men come from. 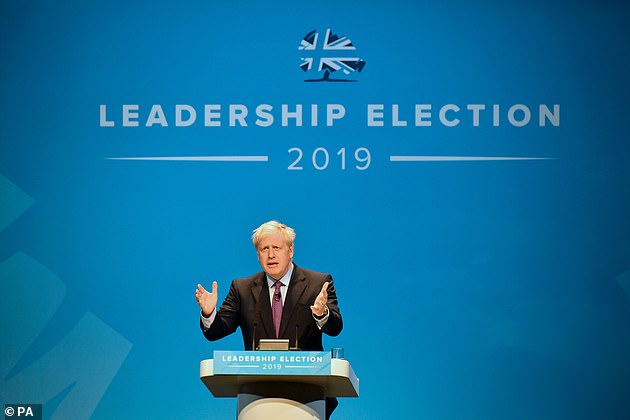 Speaking at a hustings in Birmingham on Saturday, Boris Johnson did not mention the issue in his opening comments, insisting: ‘We need to get Brexit done… and I am the right man’ 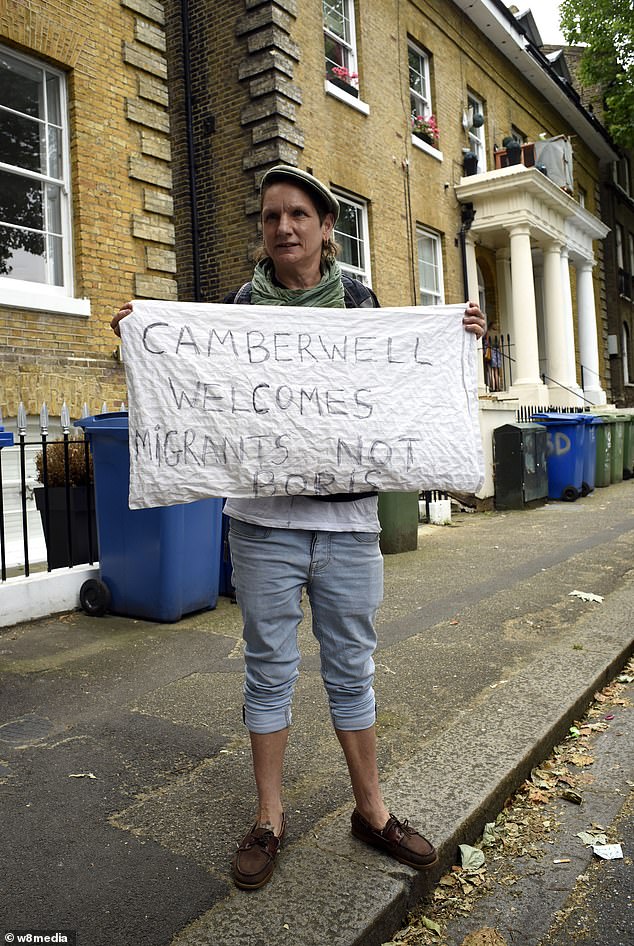 Six members of the anti-establishment group – including veteran protester Ian Bone, once described as ‘The Most Dangerous Man in Britain’ – turned up outside the Grade II Listed building just before 2pm today

‘I’m not asking for segregation, I’m asking Boris to f*** off out of Camberwell.’

She added: ‘People who preach hate speech are not welcome in our community.

‘The policies he’s going to put in are racist policies.

‘I’m not angry with Boris for what he’s says, I’m angry at Boris because he exists: the fact that the likes of him tell us what to do and how to do it.’

Bone, 71, who walked with a stick, ranted: ‘No more old Etonians, no more feudal aristocracy.

‘Come on out Boris! We know you’re hiding under your f***ing chaise longue.

He added: ‘Boris, when you look out of your window we’ll be there. 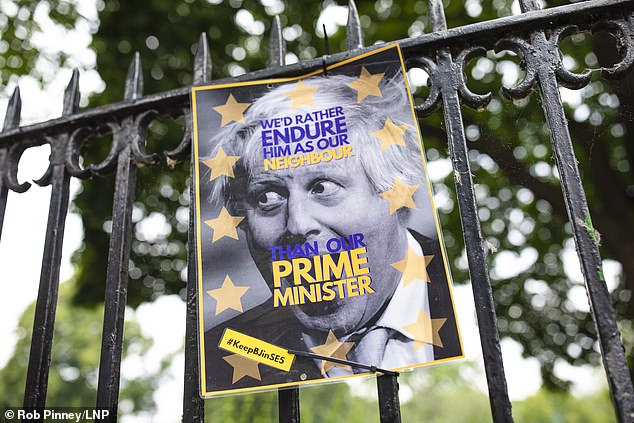 ‘When you look down the street, we’ll be there.’

Coming down from the steps outside the flat, he said: ‘We’ve had enough of old Etonians running the country.

‘They’re all a cabinet of old Etonians. Why we put up with it I don’t know.

‘On the day Boris is declared Prime Minister there’ll be a blockade at Downing Street to stop him getting in or round to see the Queen.

‘Boris is an arrogant toff who pushed a woman around – that’s what the feudal elite are like.’ 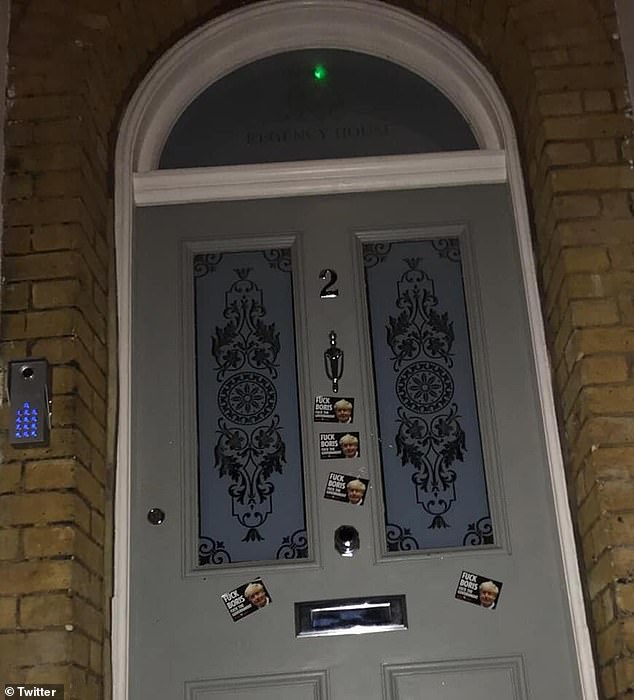 Asked if Johnson is fit to be Prime Minister, Bone said: ‘He certainly ain’t – he ain’t even fit to be a Pie Minister.’

The protesters moved on after about 20 minutes.

Class War tweeted a picture of Ms Symonds’s front door plastered in ‘F*** Boris’ stickers the day before her row with Johnson.

Alongside the picture they wrote: ‘Oh dear, someone’s stuck CW stickers all over Boris’ front door!’

Mr Johnson and Ms Symonds have not been seen at the flat since police were called there in the early hours of Friday. 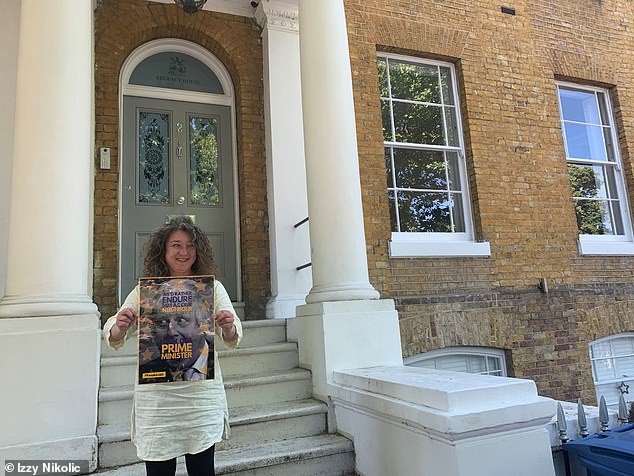 Local Kirstie Lamont, stood outside Miss Symonds’s flat yesterday holding up the posters that have been plastered around Camberwell Green.

One was even placed on Johnson’s car, next to two parking tickets.

The posters, emblazoned with stars from the EU flag and a picture of Johnson’s face, read: ‘We’d rather endure him as our neighbour than our Prime Minister’.

Speaking yesterday Ms Lamont said: ‘Labour could all be dead and we’d still vote for them.’

When asked whether she thought the posters would make Miss Symonds feel uncomfortable living in her flat Ms Lamont said: ‘Well, move.

‘Kensington and Chelsea is much more their kind of place.’

Last night, a friend of Mr Johnson and Miss Symonds told the Mail on Sunday: ‘Carrie really doesn’t feel safe in her own home anymore with anti-Boris leaflets and posters stuck up on the road, hand-delivered hate mail and now her private conversations being taped through the walls.’

Not only did the couple record the altercation, it also emerged yesterday they took the trouble to record police officers at the scene – and take down the registration numbers of their cars, all of which they passed to the Guardian.

Miss Symonds considers the recording to be a ‘stitch-up’ that had been ‘politically motivated’.

According to the Sun, a member of Johnson’s camp said: ‘She and Boris will not be going back there as they are too worried about the hostility they faced.

‘Carrie is now really frightened and cannot believe this has happened over such a minor matter.’