The son of Good Day New York anchor Rosanna Scotto is set to testify against his former friend James Rackover in his murder trial.

It is unclear exactly when Ruggiero will testify, as the trial began Thursday with jurors being shown the gruesome evidence of Rackover’s blood-stained clothes and bed sheets from the night he allegedly stabbed Comunale to death during a party at his luxury New York City apartment.

On Friday, jurors were shown photos of Rackover and Ruggiero posing shirtless together in pictures taken from Rackover’s cellphone – attempting to establish a close relationship between the two men before Scotto’s son takes the witness stand.

Louis Ruggiero, 24, is the son of Rosanna Scotto  and grandson of former Gambino boss Anthony Scotto. He will testify against former friend James Rackover 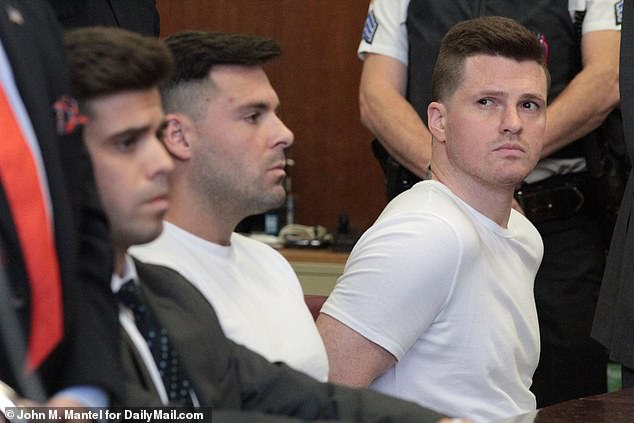 Rackover (pictured in court in October 2017), 27, and former friend, Lawrence Dilione, 30, are accused of fatally stabbing Joey at an alcohol and cocaine-fueled party inside Rackover’s luxury New York City apartment in November 2016

Ruggiero has had his own run-ins with the law, after being charged with stealing a 40-year-old woman’s $1,000 Chanel purse at a Manhattan club in 2015.

He was arrested when officers saw him walking out of Marquee club with a purse under his jacket and found him to be in possession of the purse, a bag of cocaine and a false Illinois license.

In Thursday’s trial, the disturbing photos showed a blood-splattered pair of pants, a strained dark brown pair of dress shoes and a once-white bedsheet, which had been dumped in the trash near the Manhattan party boy’s home.

Rackover, 27, and former friend, Lawrence Dilione, 30, were arrested and charged with the murder.

Authorities say Comunale, of Connecticut, was brutally killed in an argument over cigarettes.

Jurors have also been shown evidence discovered dumped in trash bags at the Grand Sutton on E. 59th Street in Manhattan, within two days of the murder. 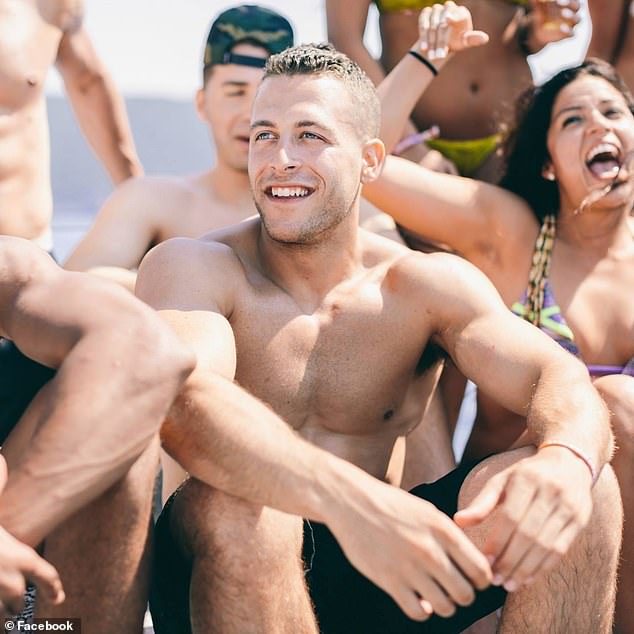 Comunale’s (pictured) body was found three days after the gruesome murder. His body had been mutilated, burned and buried in a shallow grave in Oceanport, New Jersey, where Dilione lived 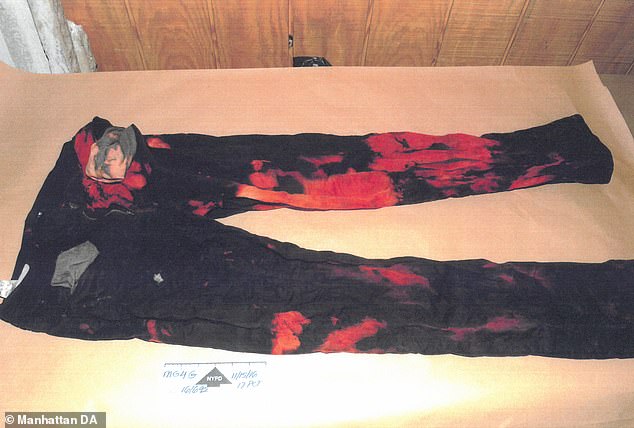 Jurors at James Rackover’s murder trial were shown the blood-stained clothes and shoes from the from the night he allegedly stabbed to death Joey Comunale. This photo shows pants recovered from the trash that had blood stains all over them 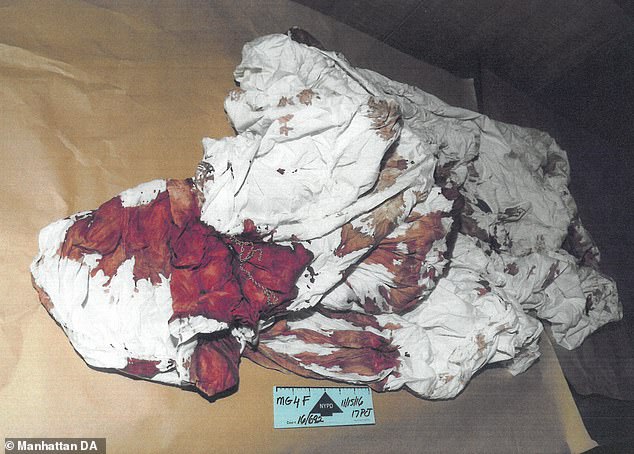 A once white bedsheet splattered with blood was also shown to the jurors on Tuesday. A gold chain necklace was caught inside the sheet. Joey’s friend said he was wearing the chain the night he was killed

On Tuesday, Michelle Gangi, a detective with the New York Police Department, showed jurors a gold chain necklace found inside the bloody bed sheet recovered from the garbage, according to the New York Daily News.

Joey’s best friend previously said the victim was wearing the chain the night he died.

The jury also saw the victim’s bleach-stained clothes, including a gray sweatshirt that smelled strongly of bleach, his driver’s license and college ID.

Blood-stained towels and empty bottles of household cleaners were also seen in court.

The victim’s body was found three days after the gruesome murder.

His body had been mutilated, burned and buried in a shallow grave in Oceanport, New Jersey, where Dilione lived.

Dilione’s murder trial is expected to begin in January. 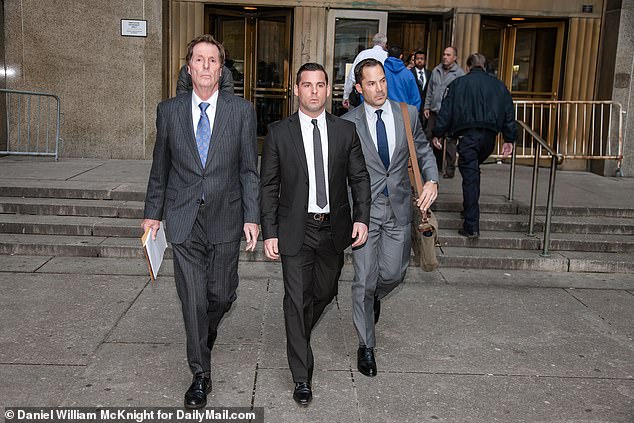 Rackover’s former friend, Lawrence Dilione, 30 (center), is also accused in Joey’s death and is set to stand trial in January

Rackover has been charged of second-degree murder, hindering prosecution, tampering with evidence and concealing a human corpse.

He faces up to life in prison for the murder charge, with additional possible sentences for the additional charges.

Rackover is said to be the ‘surrogate son’ of celebrity jeweler Jeffrey Rackover, who has designed baubles for the likes of Jennifer Lopez and was responsible for Melania Trump’s $3million engagement ring.

Jeffrey Rackover has since distanced himself from his ‘adoptive’ son, but was named in a lawsuit filed in June 2017 alleging he helped to cover up the murder.

The victim’s family claimed that Jeffrey provided cleaning supplies to Rackover and alleged that the pair were in a sexual relationship.

The lawsuit also alleged that Jeffrey let Rackover borrow his Mercedes-Benz to dispose of the victim’s dismembered remains on the Jersey Shore.

Rackover’s trial is set to resume on Monday.