Ireland’s famous mummy Takabut was murdered in her twenties by someone stabbing her in the back near her left shoulder, a new study has revealed.

Takabut is thought to have been a high-ranking woman who lived in the city of Thebes in Ancient Egypt, where modern-day Luxor is today, 2,600 years ago.

Her cause of death has been an enduring mystery for decades, ever since she was  brought to Ireland in 1834 and unwrapped for the first time the following year.

As well as her cause of death, the new analysis of her well-preserved remains has revealed she had curly, auburn hair.

Takabuti was also found to have two bizarre traits, only seen in a minority of the population.

Scans also found she had an extra vertebra, which is present in only two per cent of the population.

Takabut is thought to have been a high-ranking woman who lived in the city of Thebes in Ancient Egypt , where modern-day Luxor is today, 2,600 years ago. Scans of her body reveal what researchers had previously thought to be her heart (pictured) 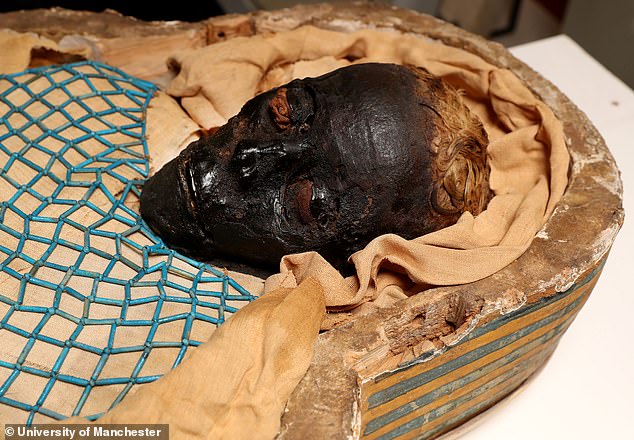 Detailed analysis revealed Takabuti (pictured) died in her 20s after being stabbed in the back near her left shoulder. Her cause of death had been an enduring mystery for decades

The scans show she was stabbed in the upper back near her left shoulder and that it was the cause of her death.

The fatal knife wound was packed with material, which another team of researchers previously mistook for her heart.

However, after almost two centuries of searching, the researchers have finally found her real heart, shrunken and dishevelled in the depths of her chest.

This, the researchers say, is extremely rare.

Dr Bob Loynes from our KNH Centre at the University of Manchester, told MailOnline: ‘While the original interpretation of a pack in the upper chest might have been the heart, recent investigation, using modern software, revealed that this particular pack was in fact just that – a pack used to seal the mortal wound.

‘However, a search of the remainder of the chest revealed a further package – not seen before – and this did indeed contain a heart.

‘While many people expect the heart to be present in an Egyptian mummy it is in fact only found in about 25 per cent of non-royal individuals.’

He added: ‘Following removal of the heart during mummification it was preserved, wrapped and then returned to the chest cavity to be available for the Weighing of the Heart Ceremony at the time of judgement.

‘This pack of resin soaked linen was used either to close the fatal wound or as a “magical” poultice to “heal the wound”.’

The heart was removed during the stage of evisceration when most bodily organs were removed.

It was then wrapped and returned to the chest in a rite reserved for only about 25 per cent of non-royal mummies, Dr Loynes told MailOnline. 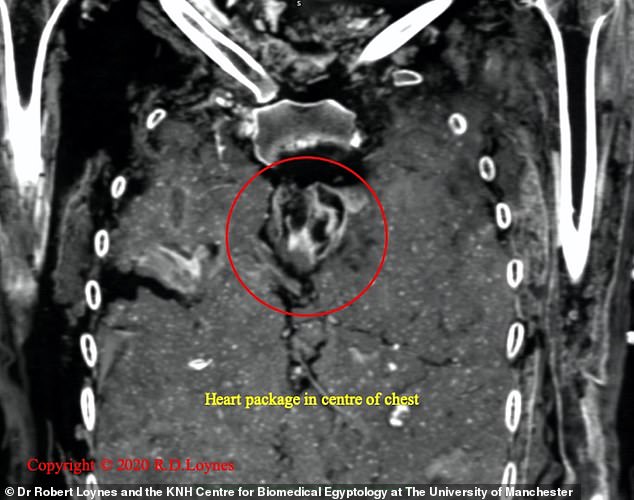 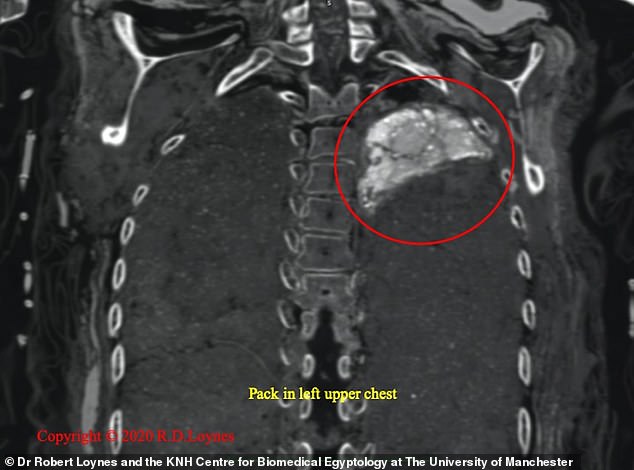 Dr Greer Ramsey, Curator of Archaeology at National Museums NI, said: ‘There is a rich history of testing Takabuti since she was first unwrapped in Belfast in 1835.

‘But in recent years she has undergone x-rays, CT scans, hair analysis and radio carbon dating.

‘The latest tests include DNA analysis and further interpretations of CT scans which provides us with new and much more detailed information.

‘The significance of confirming Takabuti’s heart is present cannot be underestimated as in ancient Egypt this organ was removed in the afterlife and weighed to decide whether or not the person had led a good life.’

The tests and examination of Takabuti were carried out over a period of months using a portable x-ray machine and other modern analysis techniques.

Takabuti was brought to Belfast, Ireland, in 1834 by Thomas Greg from Holywood, County Down, who acquired her in Thebes.

Professor Rosalie David, an Egyptologist from The University of Manchester said: ‘This study adds to our understanding of not only Takabuti, but also wider historical context of the times in which she lived.

‘The surprising and important discovery of her European heritage throws some fascinating light on a significant turning-point in Egypt’s history.

‘This study, which used cutting-edge scientific analysis of an ancient Egyptian mummy – demonstrates how new information can be revealed thousands of years after a person’s death.

‘Our team – drawn from institutions and specialisms – was in a unique position to provide the necessary expertise and technology for such a wide-ranging study.’ 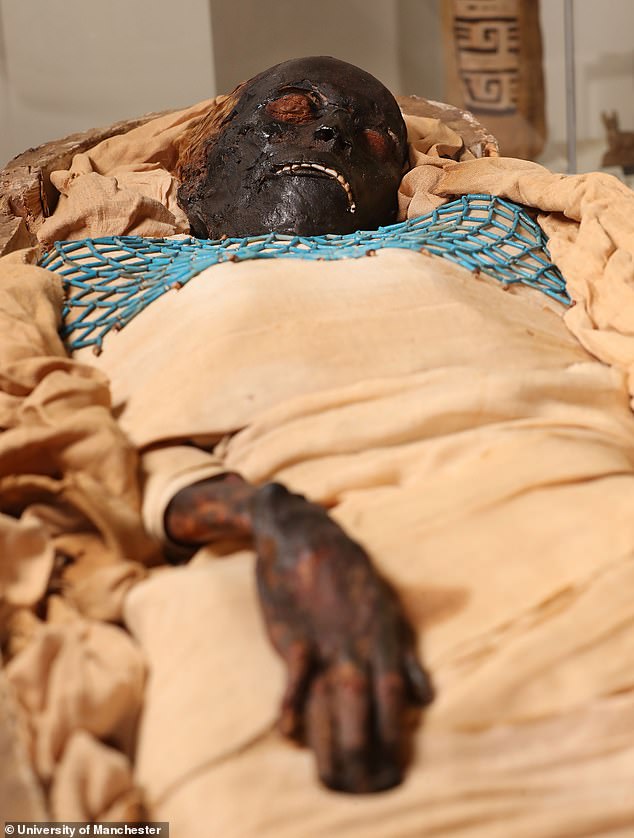 The curly-haired woman is believed to be a high-ranking woman in the city of Thebes – where modern-day Luxor is today. A team of experts used X-ray scanners, CT scans, carbon dating and hair analysis to learn the secrets of Takabuti’s life 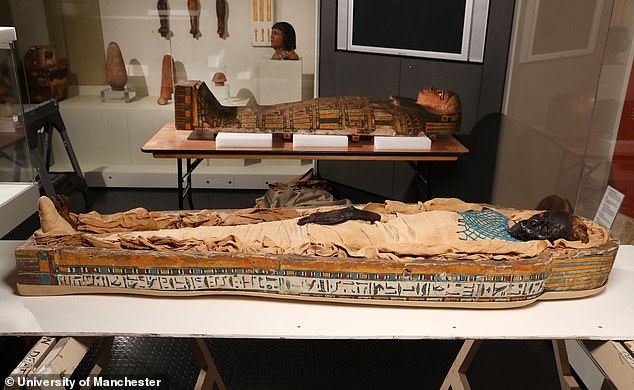 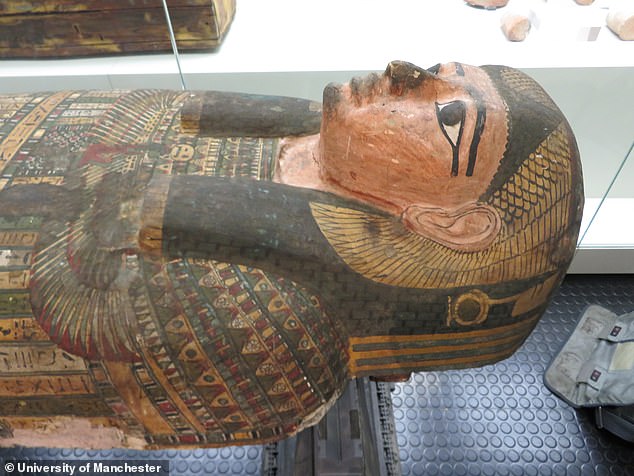 After almost two centuries of searching, they also finally found her shrunken, dishevelled heart in the depths of her chest. This, the researchers say, is extremely rare. What they previously thought was her heart was found to actually be material used to pack her fatal wound

‘It is frequently commented that she looks very peaceful lying within her coffin but now we know that her final moments were anything but and that she died at the hand of another.

‘Trawling the historical records about her early days in Belfast it is clear that she caused quite a media sensation in 1835 – she had a poem written about her, a painting was made of her prior to her ‘unrolling’ and accounts of her unwrapping were carried in newspapers across Ireland.

‘Research undertaken ten years ago gave us some fascinating insights, such as how her auburn hair was deliberately curled and styled.

‘This must have been a very important part of her identity as she spurned the typical shaven-headed style.

‘Looking at all of these facts, we start to get a sense of the petite young woman and not just the mummy.’

WHAT IS A CT SCAN?

They are several single X-rays that create a 2-dimensional images of a ‘slice’ or section of the specimen/individual.

Although an X-ray creates a flat image, several can be combined to construct complex 3D images.

A CT scanner emits a series of narrow beams as it moves through an arc.

This is different from an X-ray machine, which sends just one radiation beam.

The CT scan produces a more detailed final picture than an X-ray image.

This data is transmitted to a computer, which builds up a 3-D cross-sectional picture of the part of the body and displays it on the screen.

CT scans are used to get an in-depth view of hard to reach places and are commonly used in human medicine.

They can be used to diagnose conditions to bones and internal organs as well as determining the size, location and shape of a tumour.

CT scans are also used to recreate images of extinct animals or to get in depth view of fragile archaeological remains. 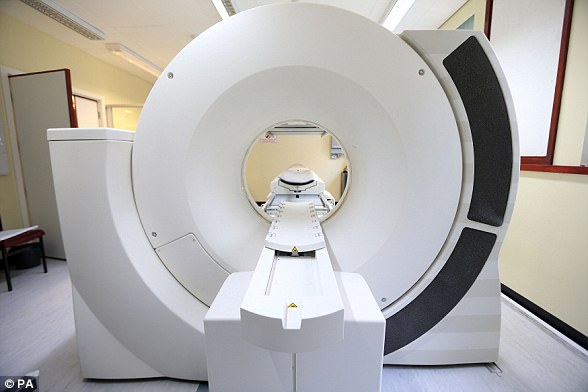