The remains of two children ages ten and 12 who were buried 34,000 years ago in Russia have revealed a clue about the way disabled people were treated during ancient times.

Their bodies were found among the Sunghir burials outside of Vladimir, Russia, Live Science reported.

They were placed in a slender, long grave, positioned head to head, and their grave was filled with more than 10,000 ivory beads, more than 300 fox teeth and at least 20 armbands.

Additionally, carved artwork, 16 ivory spears, deer antlers and the likes of two human calf bones, which were placed on the boys’ chests, filled the space.

Remains from the Upper Paleolithic period (pictured) have revealed much about the way disabled people were treated at the time, scientists have said. Researchers studied the remains of two boys and determined that even though the children were physically disabled they were cared for and received extravagant burials

Researchers compared their graves to one of a man they guessed was around 40 years old when he died.

The adult’s grave was of no comparison to those of the boys, which were packed with riches.

Around 3,000 ivory beads, 12 fox canines, one stone pendant and 25 ivory arm bands were found in the man’s grave, which means that he was awarded significantly less than the the children the researchers discovered.

Erik Trinkaus, author of the new report detailing the findings, told Live Science: ‘From the point of view of the mortuary behavior, the burial of the adult is, in fact, very different from the burial of the children.’

The Sunghir burials have been examined since their discovery decades ago, and they date back to the Mid Upper Paleolithic period.

The remains of two boys, aged ten and 12 when they died, were placed head to head in the grave, which was filled with riches

The riches in their grave were more spectacular that those of a nearby grave that belonged to a 40-year-old man, which the researchers found curious

The region where the graves are located was enduring a warmer-than-usual period when the remains were buried, researchers have said.

Ice ages occurred both before and after this period.

The higher temperatures during this time at least partially explain how the ancient hunter gatherers who lived during this time were able to break the ground, which otherwise would have been frozen, to bury their community members.

Ten bodies have been found in the Sunghir burials, but the remains of the two young boys are the most spectacular, scientists claimed.

What makes the find curious are the conditions of the children’s remains.

Both show signs of having conditions that would have contributed to the fact that they lived such short lives.

Ivory beads, ivory spears, fox teeth and carved artwork were among the riches the boys were buried with. Researchers analyzed the boys’ dental records and skeletal remains for the new study

The researchers noted that both had experienced multiple periods during which their bodies were under extreme stress.

They based their finding off an examination of the boys’ dental enamel.

Additionally, the younger boy’s thighbones were ‘exceptionally bowed and short’, and the older boy’s teeth were hardly used.

A skeletal analysis suggested that the older boy was bedridden.

‘To us, [this] doesn’t sound like much, but people from this time wore their teeth down quickly,’ Trinkaus explained.

This led researchers to speculate that the older boy was fed soft foods. 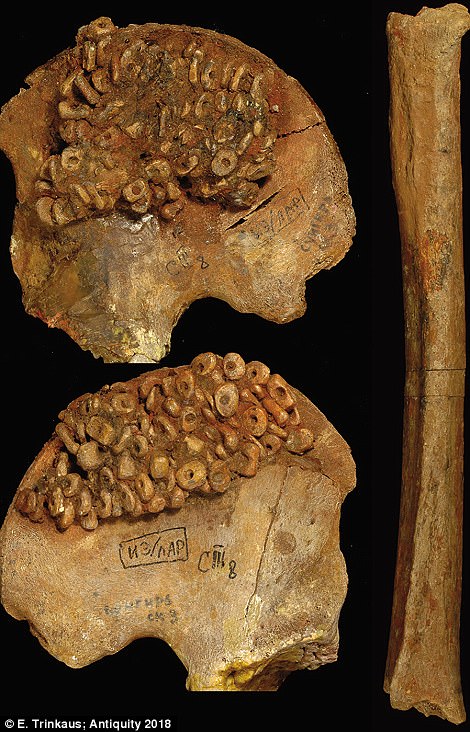 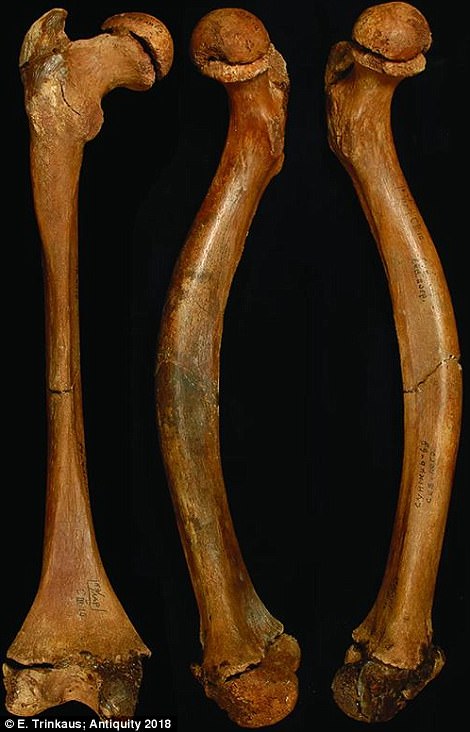 The remains from the Upper Paleolithic period were found in Russia. A total of ten bodies were found at the archaeological site

WHAT DO SCIENTISTS KNOW ABOUT THE PALEOLITHIC PERIOD?

The period’s onset has traditionally been linked to the earliest tool construction evidence.

Sites from the Lower Paleolithic period have included simple pebble tools, according to Britannica.

The hand-ax showed up about 700,000 years ago, and a number of the earliest known have been found in Tanzania.

Flint usage has been associated with this period, too.

Britannica has reported: ‘Alongside the hand-ax tradition there developed a distinct and very different stone tool industry, based on flakes of stone: special tools were made from worked (carefully shaped) flakes of flint.

Additionally, the Upper Paleolithic period, which is thought to have begun some 40,000 years ago, has been characterized by stone tool industries that were regional.

This specific part of the Paleolithic period is associated with industries that were more complex and specialized.

Trinkaus told Live Science: ‘It is really bizarre to have an individual who looks like he was bedridden in a group of hunters and gatherers who were extremely mobile.’

Researchers think that other disabled people also received burials around this time.

The study said: ‘Indeed, in the Mid Upper Paleolithic, individuals with marked developmental or degenerative abnormalities are relatively common in the burial record, accounting for a third of the sufficiently well-preserved individuals.’

But the boys’ ages were unusual, the researchers pointed out, saying that people that young typically did not receive burials that special.

Anthropology Professor Lawrence Straus explained to Live Science that the remains proved that everyone who received an extravagant burial during this time was not necessarily a ‘big, adult male hunter’.

‘In this case, adolescents – people with disabilities or pathologies that would have limited their full functioning – are getting some amazing treatment,’ Straus said. 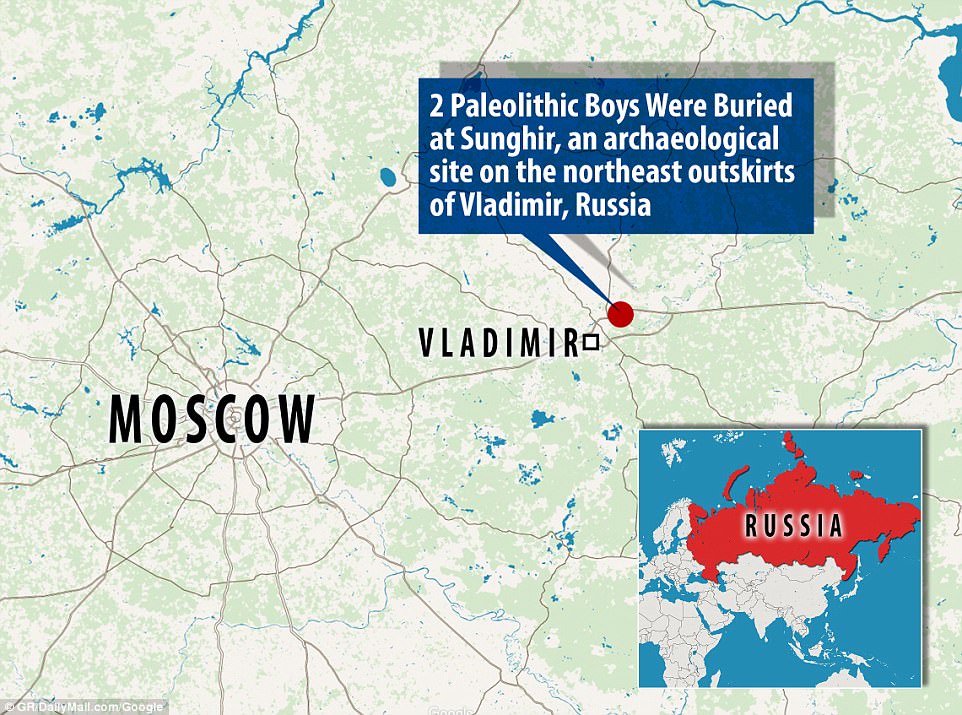 The Sunghir burials have shown experts that one did not have to be an exceptionally strong warrior to get an extravagant burial, the new report says