A prehistoric shark’s strange attempt to eat crocodile faeces has been reveal in an ancient fossil.

The fossilised crocodile faeces was found by professional diver Mark Stitzer while diving near Charleston in South Carolina.

Mr Stitzer is an avid collector of shark teeth and knew that he had found one belonging to a Carcharocles angustidens – a giant prehistoric shark that existed around 33 to 22 million years ago.

Fossilised poo, pictured, is a time capsule into animal diets and environments from around 33 to 22 million years ago

What he didn’t know was what the tooth was embedded in – crocodile faeces, which no matter how old, can bear similarities to the faeces produced by crocodiles alive today.

‘Sharks are known to be scavengers, and the poo probably smelled fishy or interesting to the shark that bit it,’ Poozeum curator George Frandsen told Newsweek.

‘And then the shark released it once it found it was not a tasty fish,’ he said.

Mr Frandsen holds the 2017 Guinness World Record for the largest collection of coprolites, or fossilised poop, at the Poozeum in Bradenton, Florida.

In 2015 he documented 1,277 coprolites collected from 15 states and eight countries, according to Guinness World Records.

Coprolites are old pieces of faeces that have become hardened over a long period of time.

They are filled with mineral deposits and, perhaps more importantly to the scientists working with them, do not smell.

It is rare for poo to be conserved in this way – making coprolites extremely valuable to scientists, who can use them to make discoveries about our planet’s biological past.

It’s not just bones that can provide a rich history of an ancient creature’s past.

Scientists also use something known as ‘coprolites’ to piece together clues about ancient history.

A coprolite is a fossilised faeces that can provide insight into the diet and environment of animals millions of years ago.

The ending ‘-lite’ is a common ending for fossil or mineral terms, coming from the Greek word lithos, which means stone

The prehistoric faeces becomes hardened over time and can sometime resemble the those of species alive today.

Coprolites do not smell and are filled with mineral deposits like calcium carbonates.

Faeces typically decays quickly and so coprolites are rare to find.

The largest known ancient coprolite came from a T. rex and is known as the ‘Saskatchewan coprolite’ after the location in Canada where it was found. The

At over 30cm long, scientists believe the T.rex would have been the only carnivorous beast big enough to produce such a specimen. 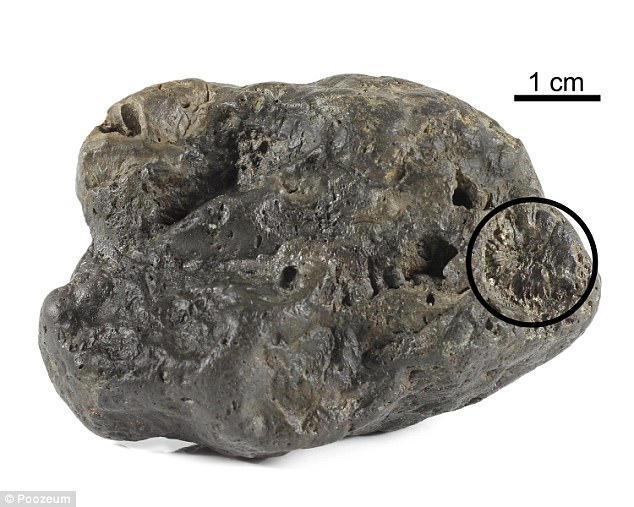 Ancient poo found in South Carolina, pictured, appears to have a prehistoric shark bite embedded into it 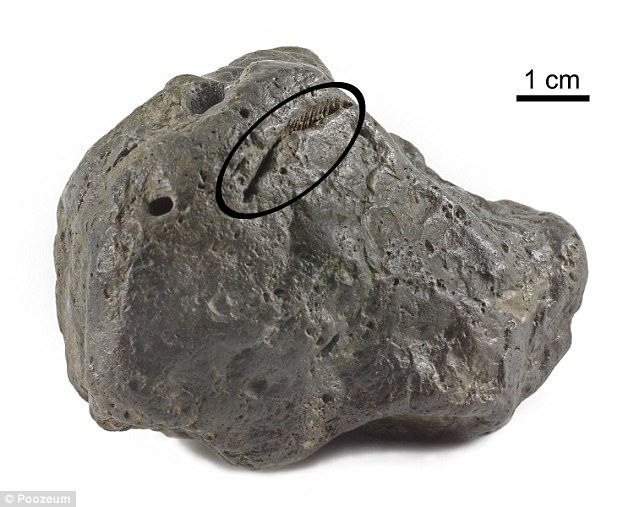 Coprolites, pictured, that have teeth marks are extremely rare finds with only 10 recorded to exist today

Earlier this year a genetics research professor at Northern Arizona University, Faith Walker, told Mother Jones that faeces was ‘becoming more and more important as a research tool’ explaining how faeces was being used to track climate change and even find new energy sources.

The piece of faeces with a shark bite is a particularly rare find – less than 10 coprolites existing today have preserved some level of bite mark, according to Poozeum.

Most agree that this shark wanted to eat the animal’s faeces and lost its tooth after deciding it wasn’t for them.

She said: ‘There are some sharks that feed on prey items that live primarily on the sea floor so I imagine sharks do, at least incidentally, consume some faeces.’

Weighing 1lbs 4oz the unique poop will be on display at the Florida Museum of Natural History from 27 January through to 6 May 2018.