Ancient Viking fire festival Up Helly Aa gets under way

Thousands of ‘Vikings’ took to the streets brandishing burning torches and axes as the ancient Up Helly Aa festival got under way on the Shetland Islands.

The event, a celebration of the Scottish island’s Norse heritage, drew massive crowds with many ‘warriors’ wearing winged helmets and sheepskins.

The festival of fire in the capital of Lerwick remembers the Vikings that ruled the northern 1,000 years ago.

Others carried axes and shields as they marched through the streets of the town in a valiant attempt to conjure up its Viking past. 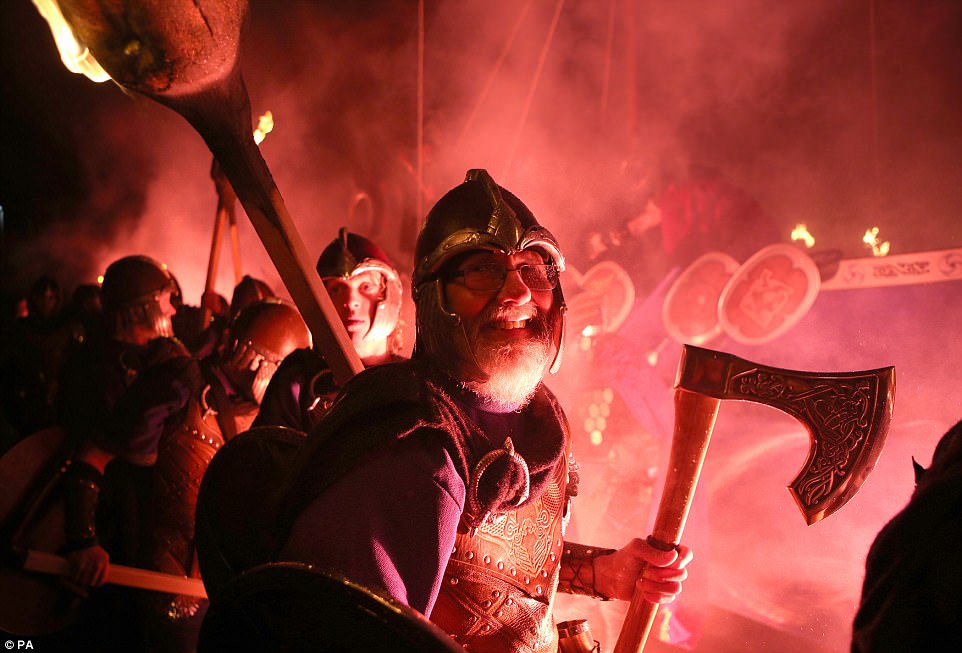 Guizers carry torches which they will eventually throw onto the ceremonial longship, setting it alight 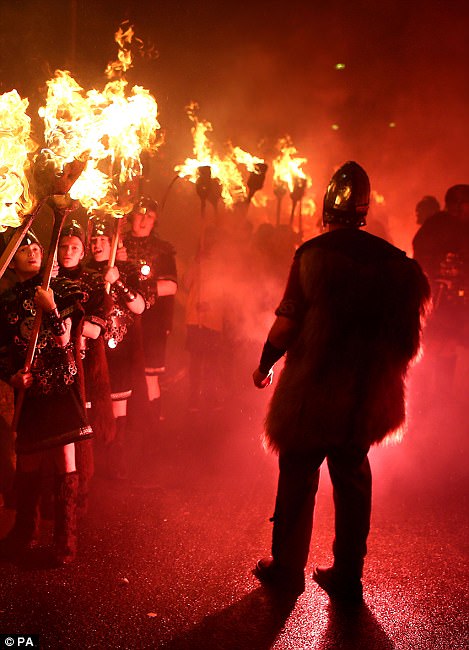 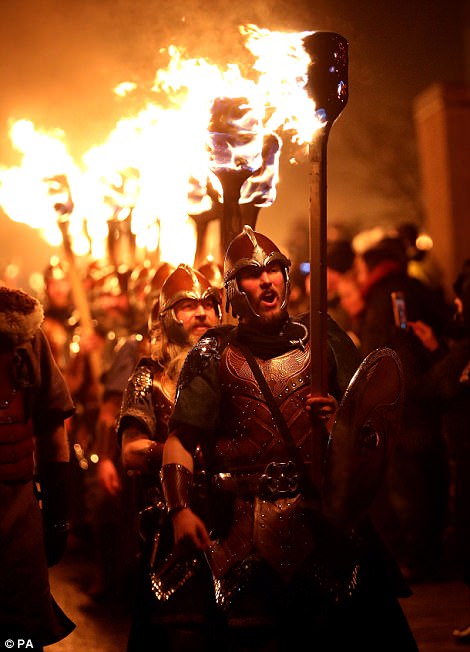 The event saw Jarl Squads line the streets as they marched through the dark, illuminating Lerwick with a deep red glow 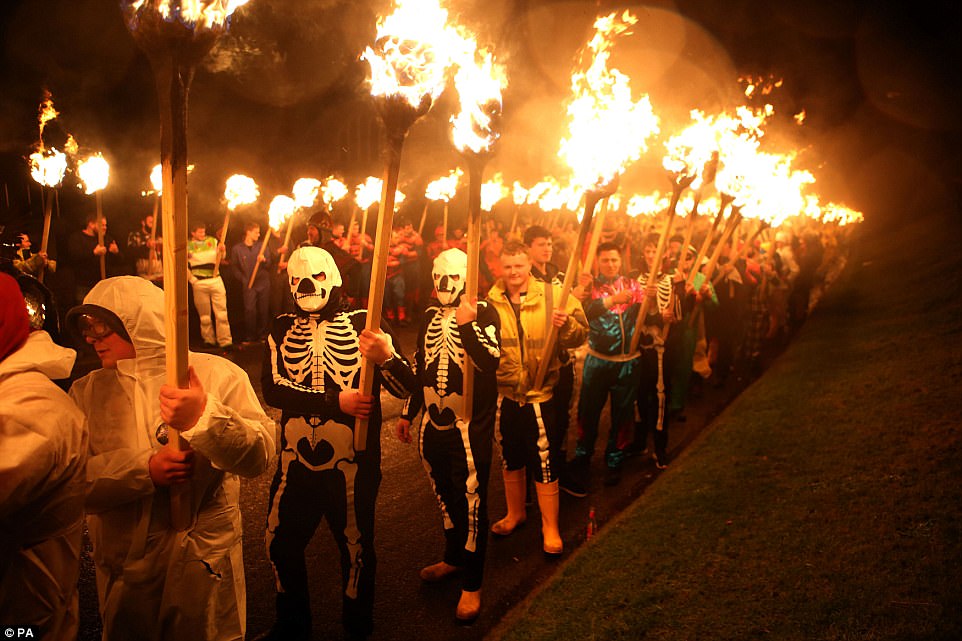 The spectacle, which attracts visitors from around the globe, takes place in Lerwick on the last Tuesday of January each year and dates back to the 1880s.

The festivities include a Viking longship being dragged through the streets and later burned after sundown.

Hundreds of costumed ‘guizers’ carried flaming torches as they took to the streets of the Scottish island. 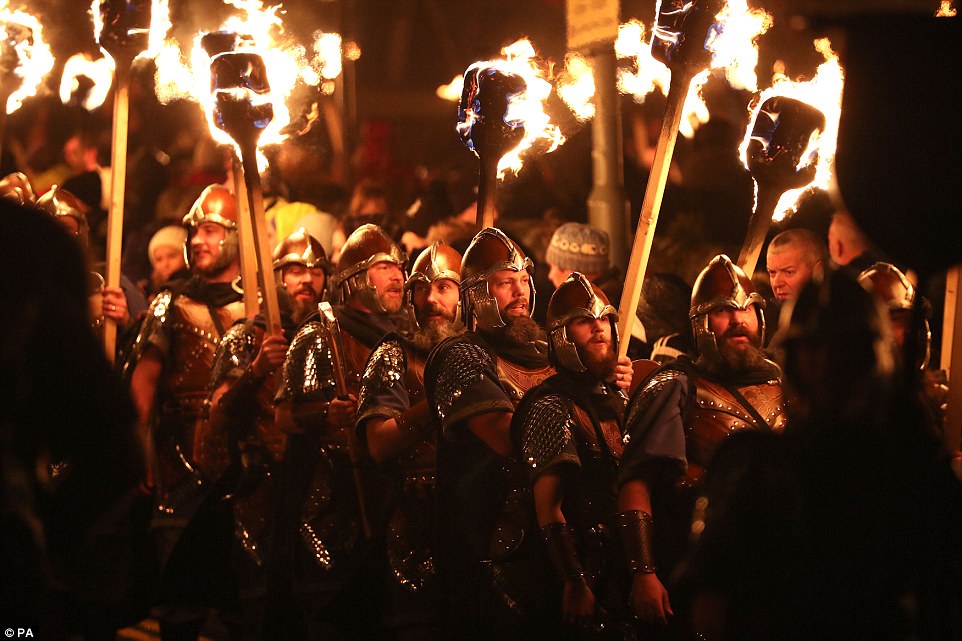 The procession is led by the Jarl Squad, who are responsible for dragging the ceremonial longship to the spot where it will be set alight 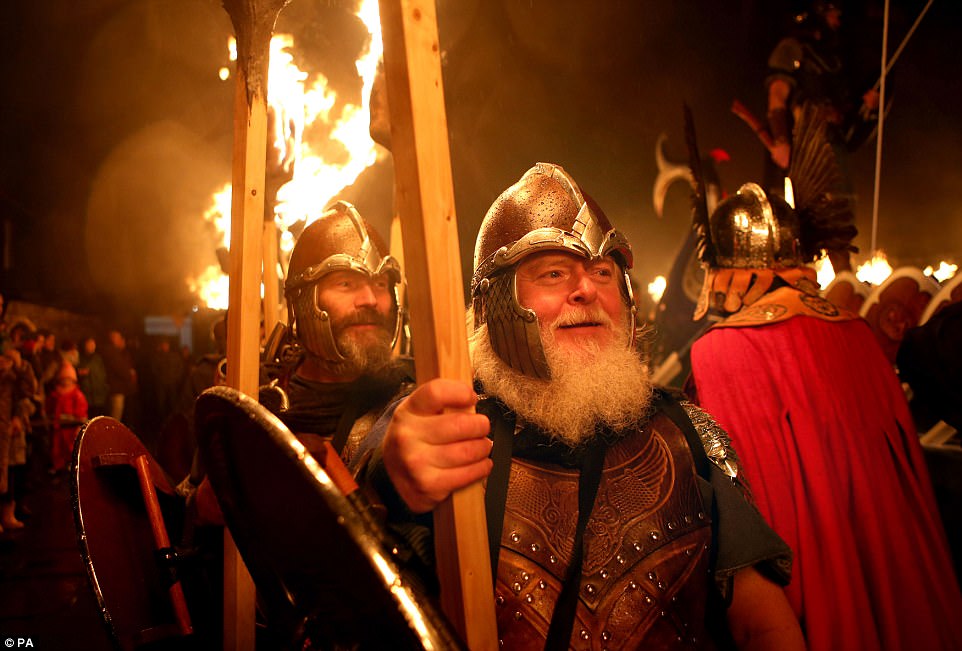 Many of the Shetland’s 22,000-strong population attended the event, which has been held annually for more than a decade 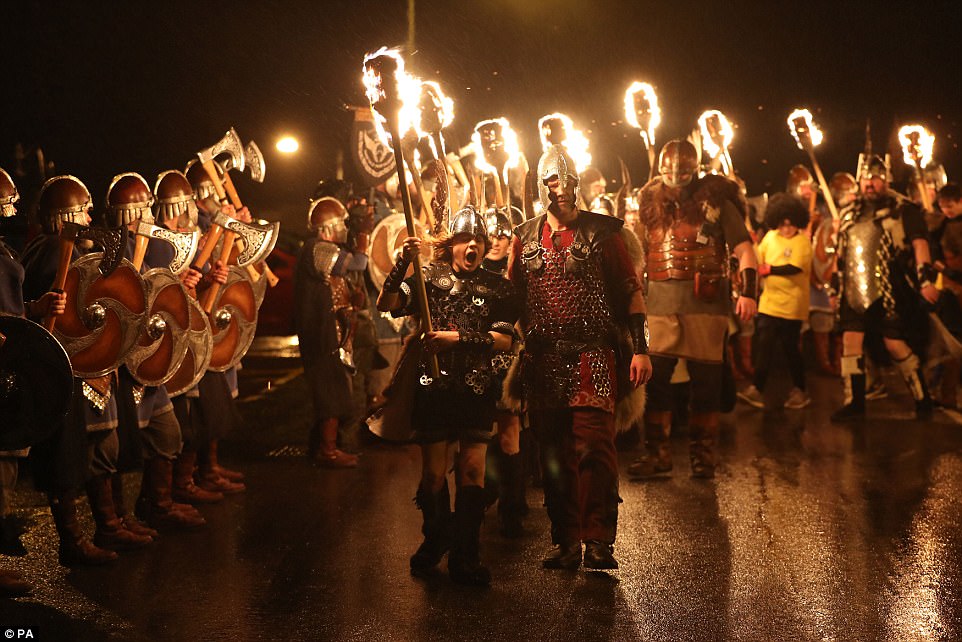 Hundreds of costumed ‘guizers’, both young and old, carried burning torches through the town centre 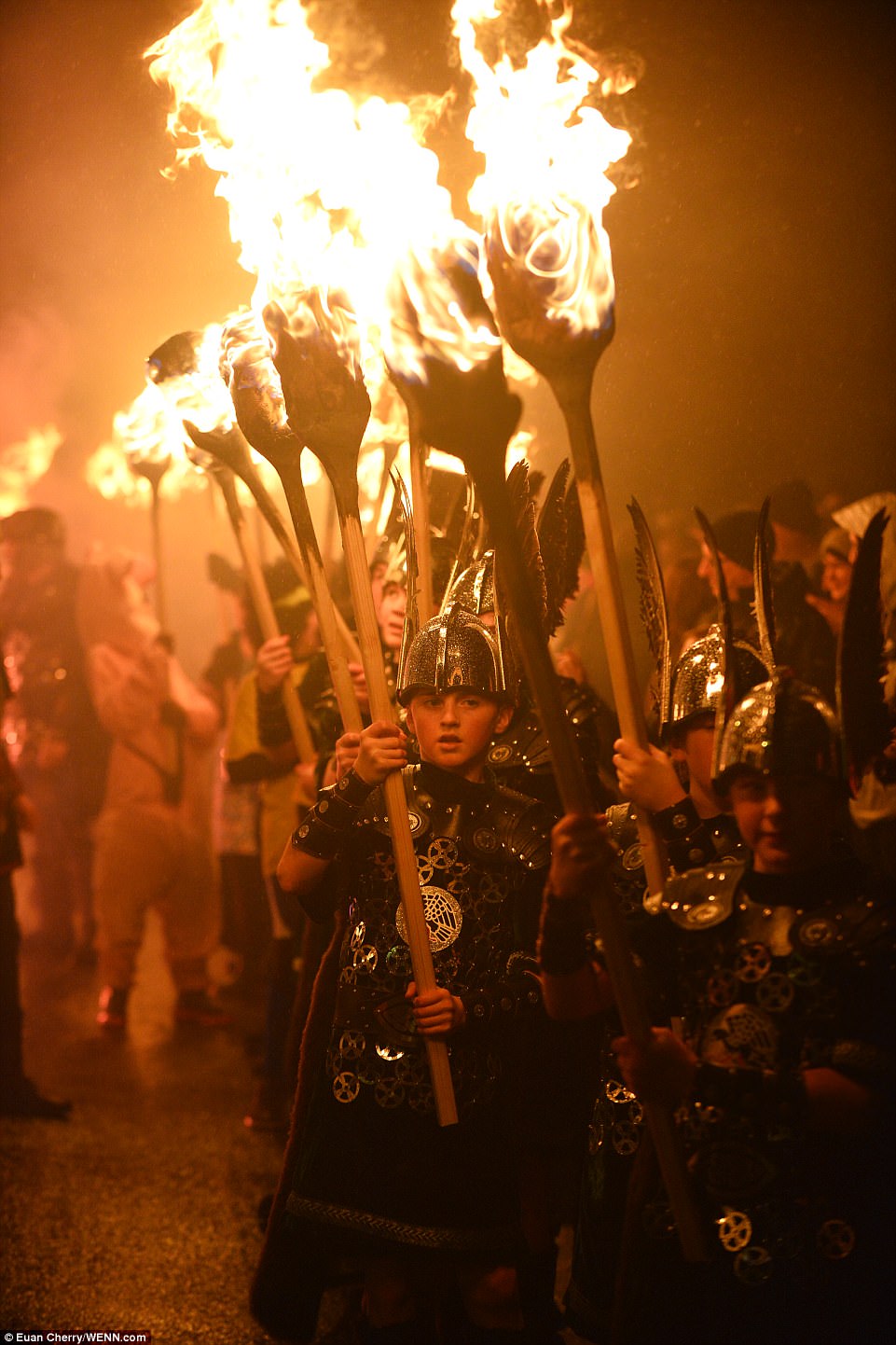 The warriors were garbed in Norse clothing and armour, with many carrying axes and heavy shields 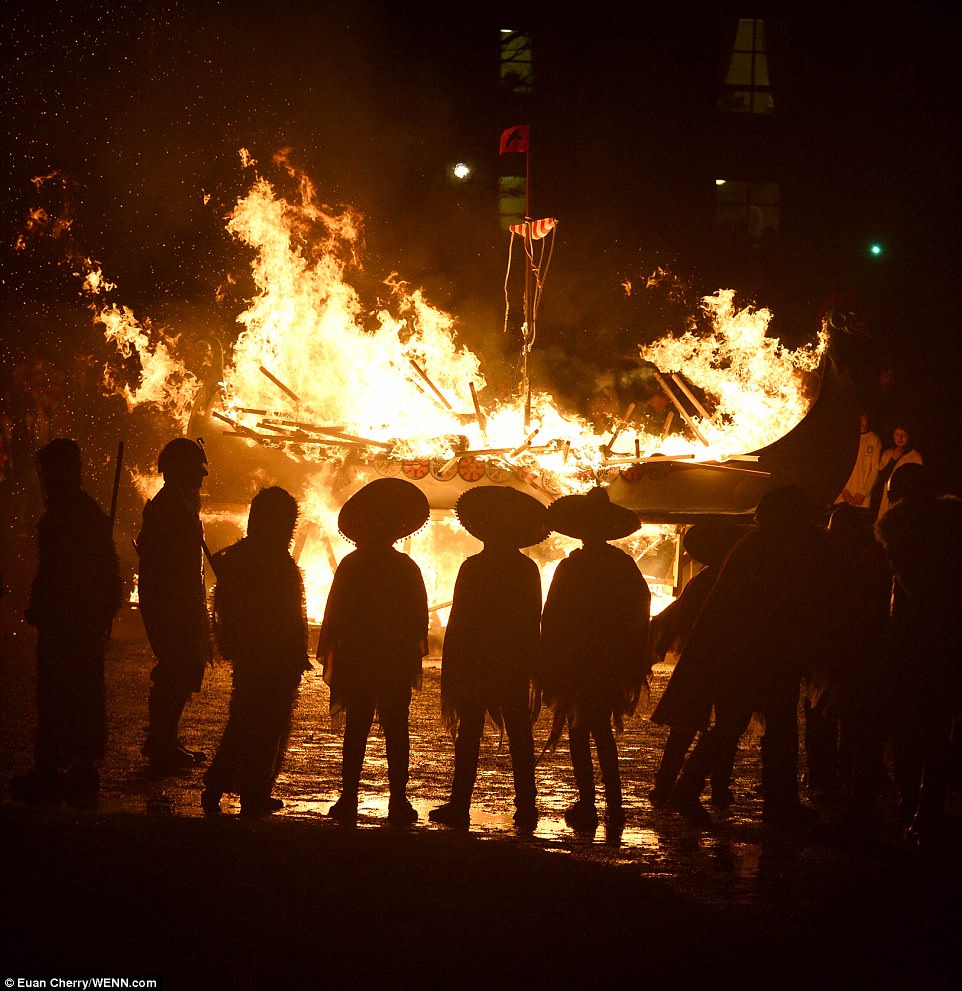 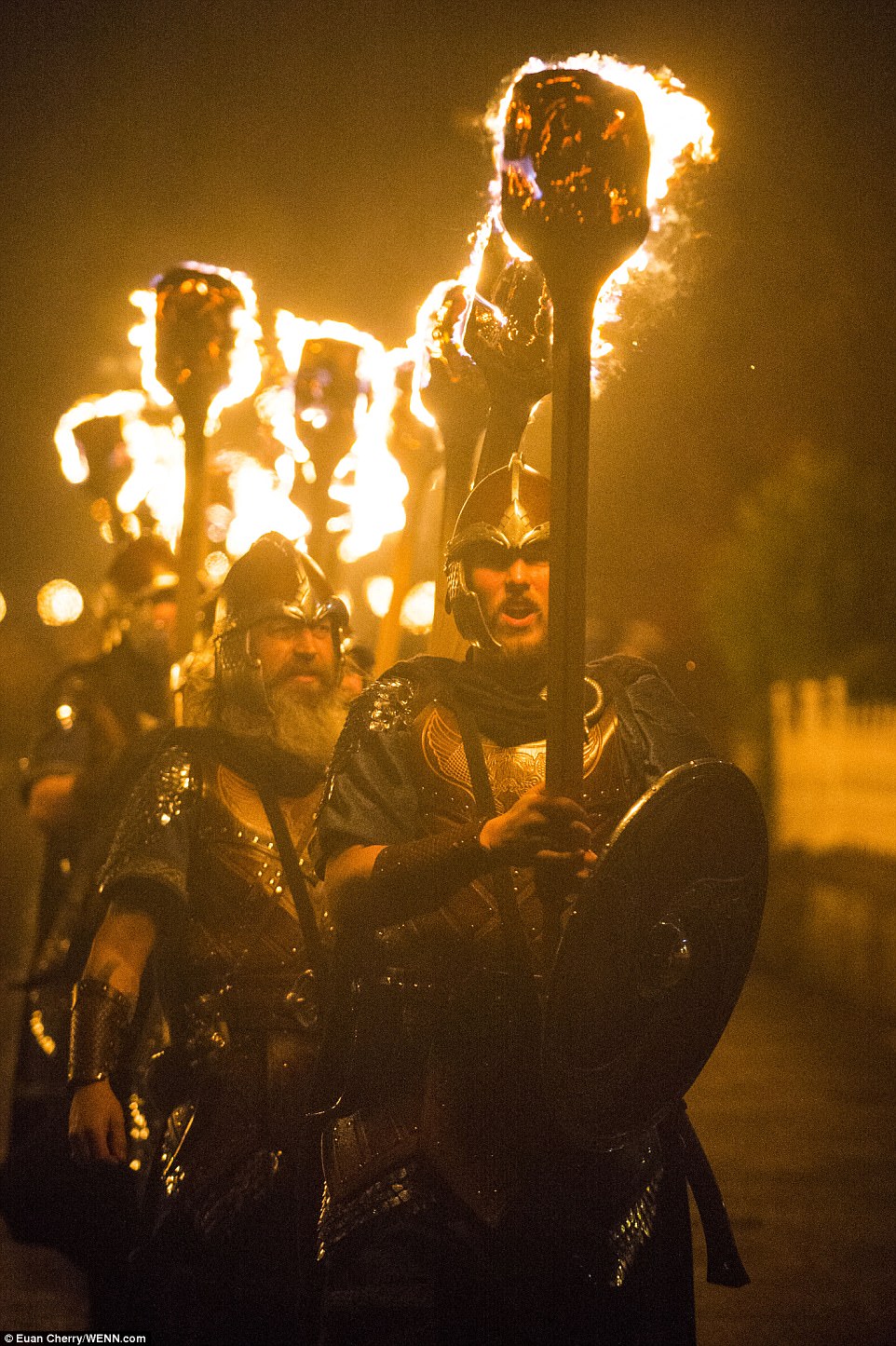 The Jarl Stewart Jamison leads his viking squad through the night 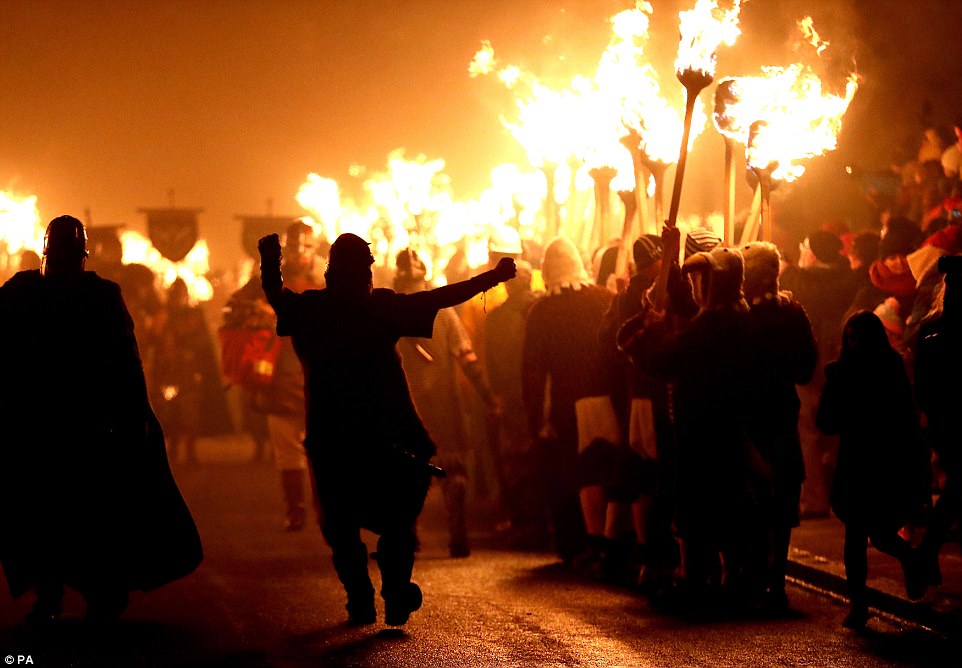 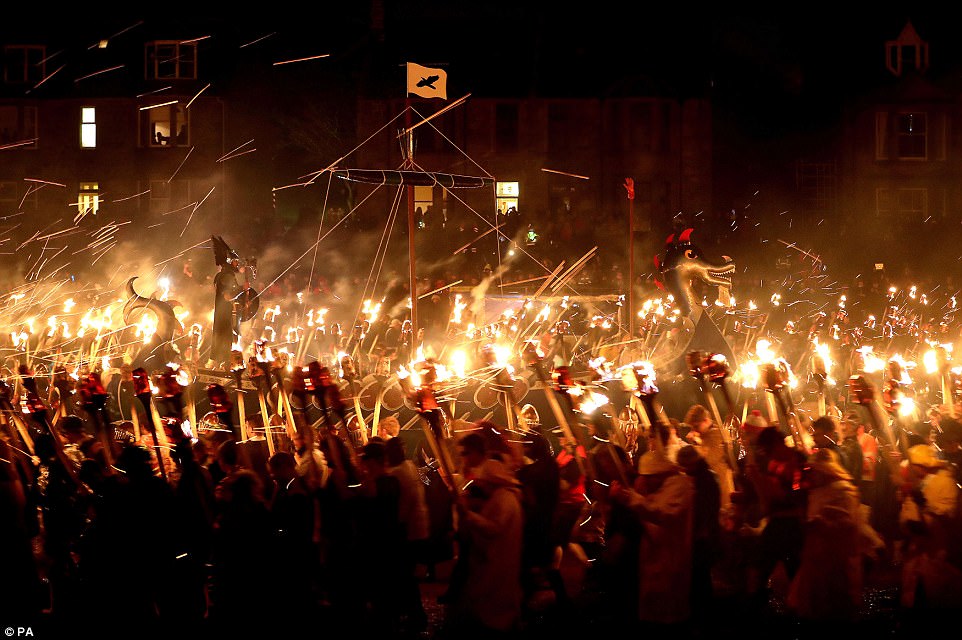 The procession was led by the Guizer Jarl, or chief guizer, and culminated after dark when the replica longboat was dramatically set alight.

Work begins at the end of October to ensure everything is ready for the celebrations.

Volunteers are responsible for the building of the galley boat and the production of more than 1,000 torches.

Those taking part in the festival spend the night moving between various celebrations in halls around the town.

Shetland and neighbouring Orkney were ruled by the Norse for about 500 years until they became part of Scotland in 1468. 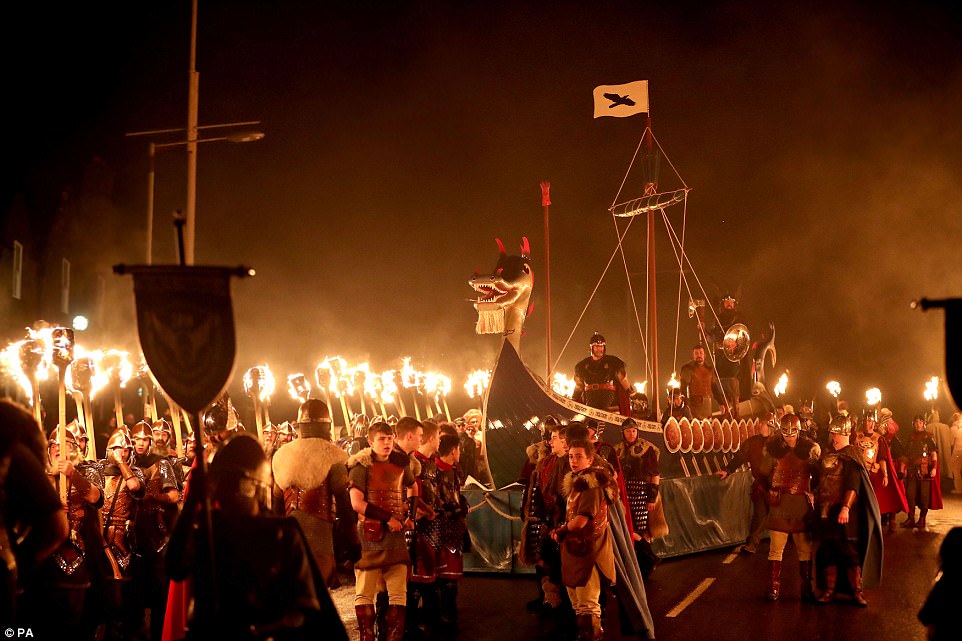 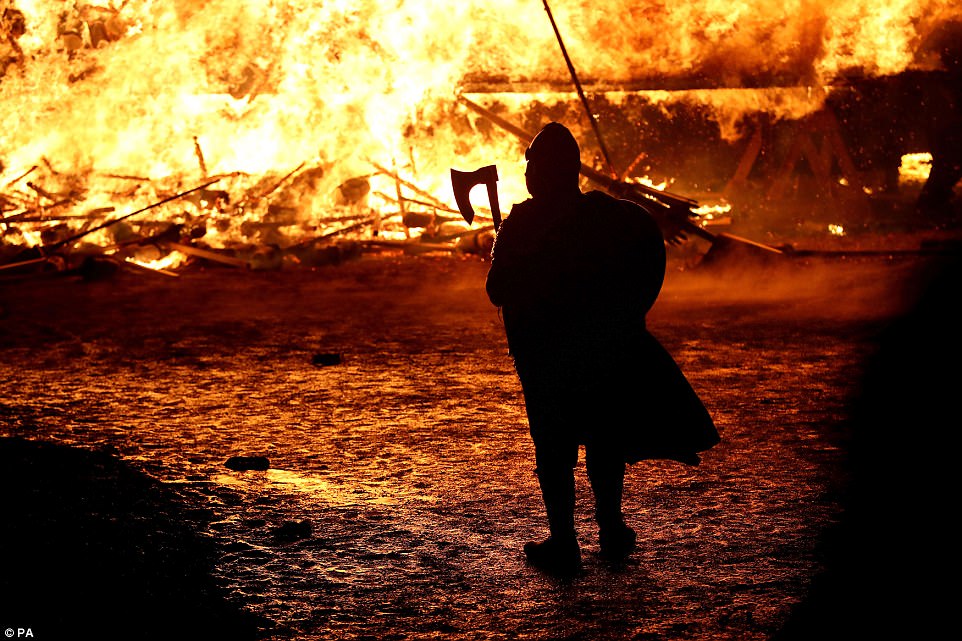 The ship, which takes months to construct, burns in just a few hours 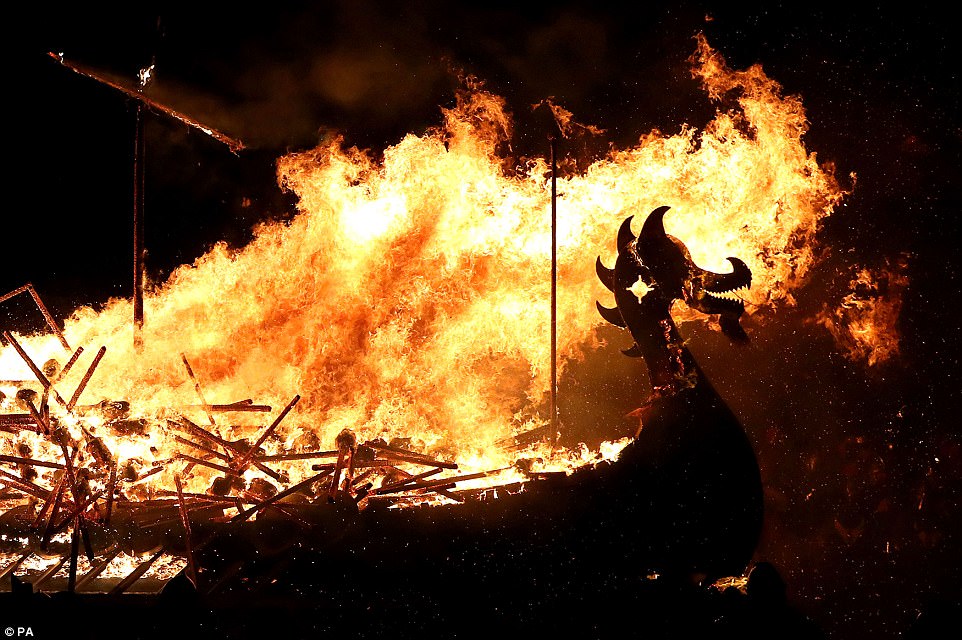 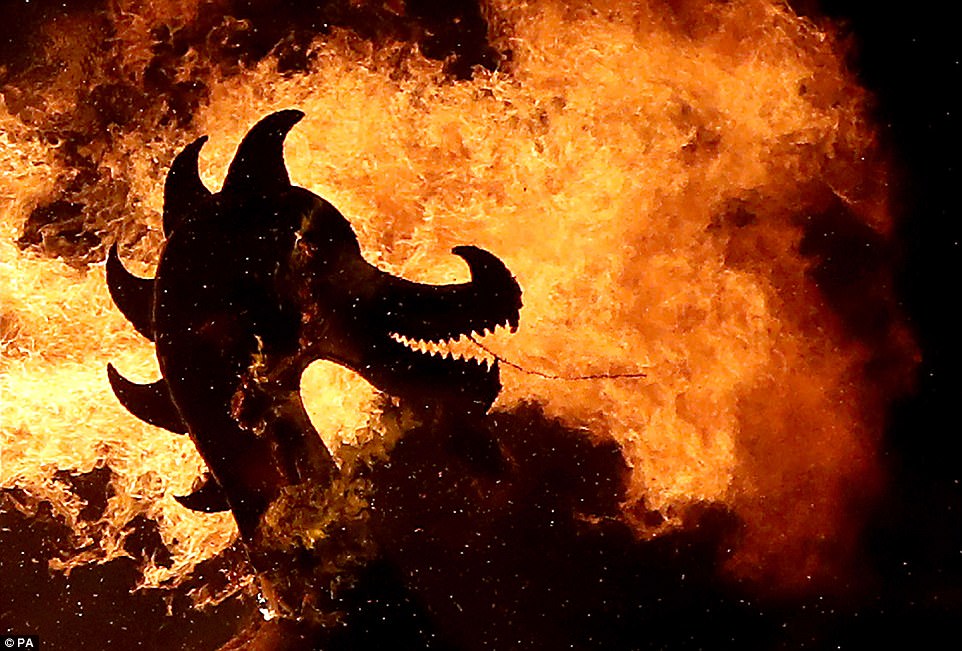 Once the longship has burned, guizers sing the traditional song ‘The Norseman’s Home’ before going on to a night of partying 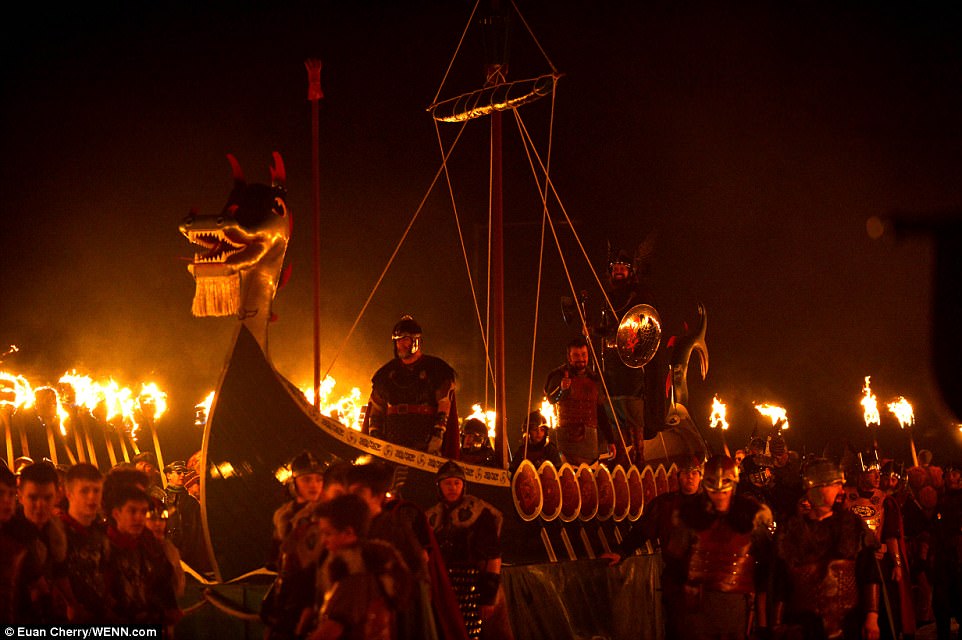 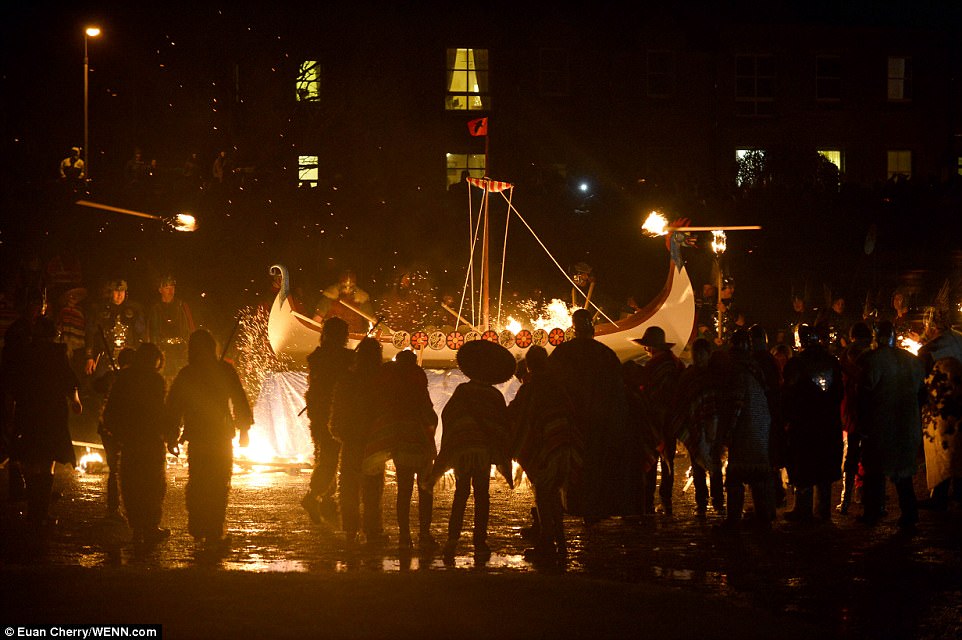 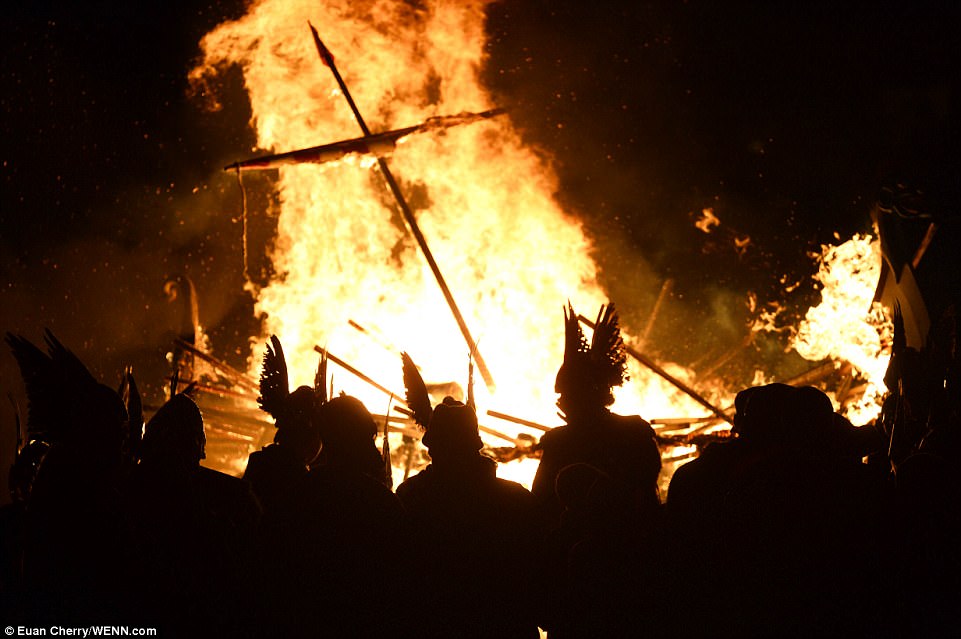 Later, participants flooded various halls around the town where festivities continued until the early hours 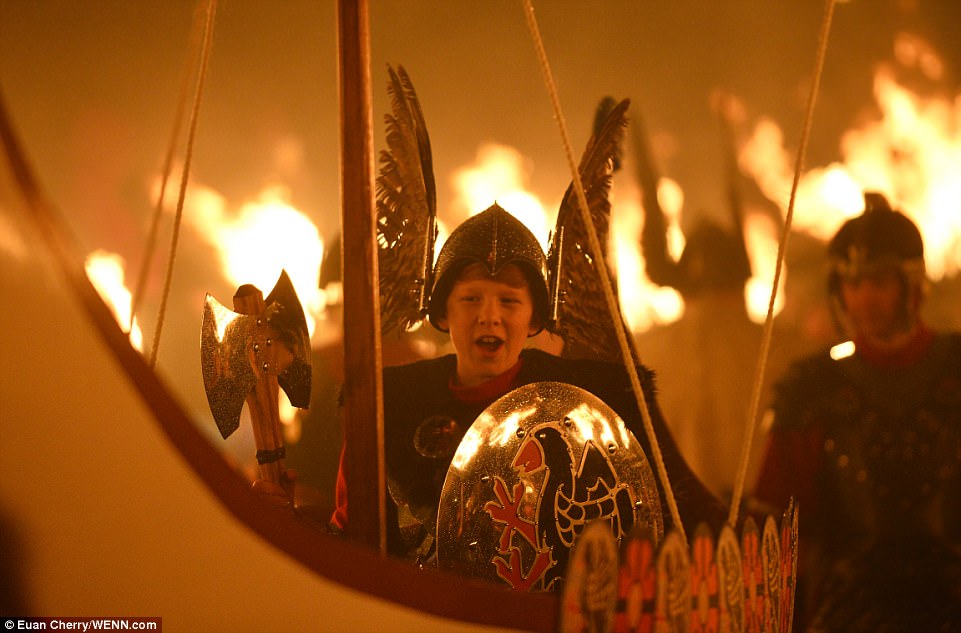 The current incarnation of the festival stems from the 1870s when a group of young local men wanted to inject Shetland’s Christmas celebrations with something new.

At the time, squads of young men would drag barrels of burning tar through town on sledges, making mischief.

But as the event became more raucous year on year concerns over public safety grew.

This led to a change in the celebrations, and saw town chiefs draw inspiration from the islands’ Viking history.

The honorary role of the ‘Jarl’ was introduced to the festival in the early twentieth century.