Moyes’s nine changes showed on a fair night in Brussels with the rusty Said Benrahma squandering at least three chances to score, blazing one opportunity over an open goal.

Yet the introduction of Gianluca Scamacca, Lucas Paqueta and Declan Rice in the 70th minute made it three wins from three. Rice’s diagonal ball switched the play before Paqueta fed Scamacca, who turned and scored to hand West Ham a 1-0 win over Anderlecht.

There can be few more satisfying sights for managers than when their substitutions come good and the confidence of £35.5million striker Scamacca is clearly growing, having bagged his first Premier League goal last week.

Flynn Downes, the 23-year-old midfielder, deserves a special mention, too. His tidiness in the centre of the park gave West Ham control before they found the breakthrough.

Rice told reporters on Wednesday night about the ‘obscene’ amount of games he had played in the last year – 68 between June 2021 and June 2022 – and Moyes wanted to rest him here.

With Rice on the substitutes’ bench sat other regular starters, including Scamacca, Paqueta and Tomas Soucek. Only Jarrod Bowen and Craig Dawson remained from West Ham’s last win over Wolves and that contributed to a slow start from the visitors.

In the 25th minute, an Anderlecht breakaway ended with Yari Verschaeren stinging the palms of West Ham goalkeeper Alphonse Areola. The 21-year-old was looking like the home side’s greatest threat, with those in Belgium hopeful he will become the next Eden Hazard.

West Ham’s first chance to score arrived when Dawson won the ball in his defensive third. A swift counter-attack later, Vladimir Coufal cut the ball back from the right wing for Benrahma. He struck his shot against Zeno Debast, the only defender in his way. 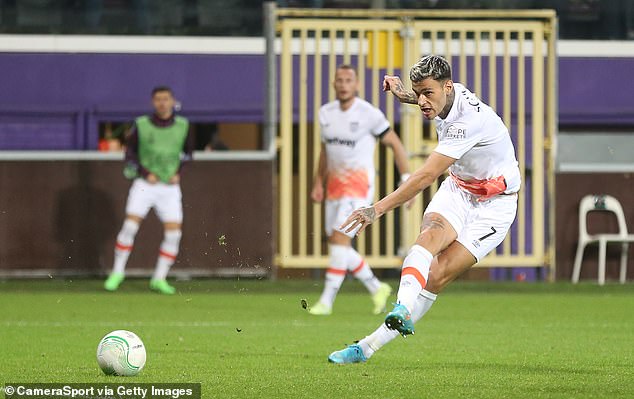 Benrahma would endure an even worse miss before the break when Bowen skipped by the sliding challenge of Wesley Hoedt. Instead of shooting, he unselfishly passed to Benrahma. The goal was gaping and the net begging to be rippled, yet he fired the ball up and into the stands.

It was a head-in-hands moment for Benrahma. Both of West Ham’s greatest chances to score had fallen at his feet and he had not taken either opportunity. You could bet Moyes would be letting him know his feelings at half time.

Trying to make amends for his earlier misses, Benrahma tested Anderlecht goalkeeper Hendrik Van Crombrugge with a low shot at the start of the second half.

Frustrated, Moyes turned to his talented trio. Rice, Scamacca and Paqueta were introduced and within 10 minutes, all three were involved in handing West Ham the lead.

Rice’s cross-field pass found Coufal, who headed the ball down to Paqueta. He fed Scamacca, who controlled with his left foot then scored with his right.

In the 84th minute, Areola produced a sensational stop to deny Fabio Silva, the striker formerly of Wolves, from equalising with his head.

It was not the most straightforward night for West Ham but it’s three successive wins nonetheless. 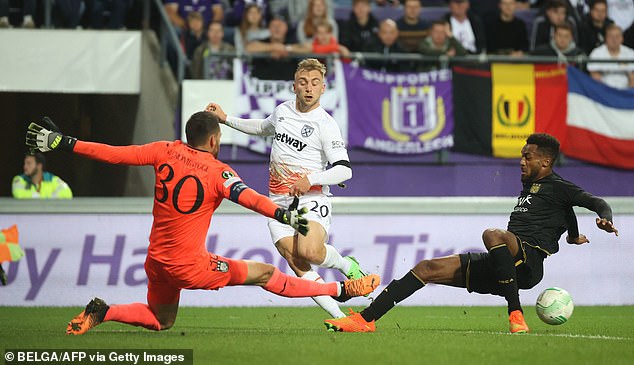 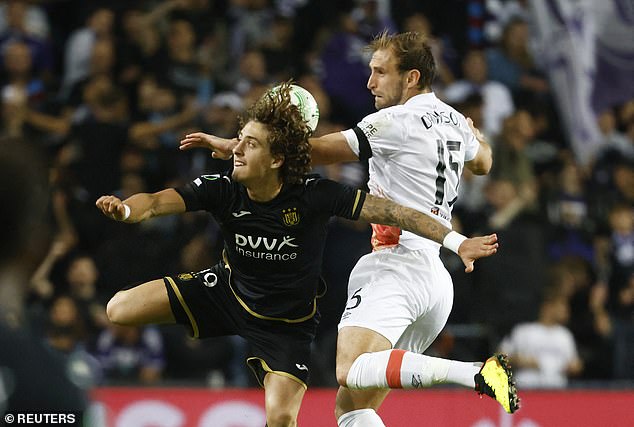