A downcast and doleful Anderson Cooper watched as his mother’s coffin was taken from an Upper East Side funeral home and loaded into a hearse ahead of her burial service.

The CNN host was joined by his ex-boyfriend Ben Maisani as he took care of funeral preparations for Gloria Vanderbilt earlier in the day, a little over a year after Cooper revealed he had split from his partner of almost a decade.

Also in attendance was Julio Cesar Recio, who was with Cooper from 2004 until 2009, the same year he met Maisani.

Cooper had spoken in the past about this day, and in one heartbreaking passage from his memoir explained: ‘My father died in 1978, when I was ten; and my brother, Carter, killed himself in 1988, when I was twenty-one, so my mom is the last person left from my immediate family, the last person alive who was close to me when I was a child.’

Orphaned: Anderson Cooper (above watching funeral home employees load his mother’s coffin into a hearse) watched as his mother Gloria Vanderbilt was carried out in her coffin on Tuesday ahead of her burial 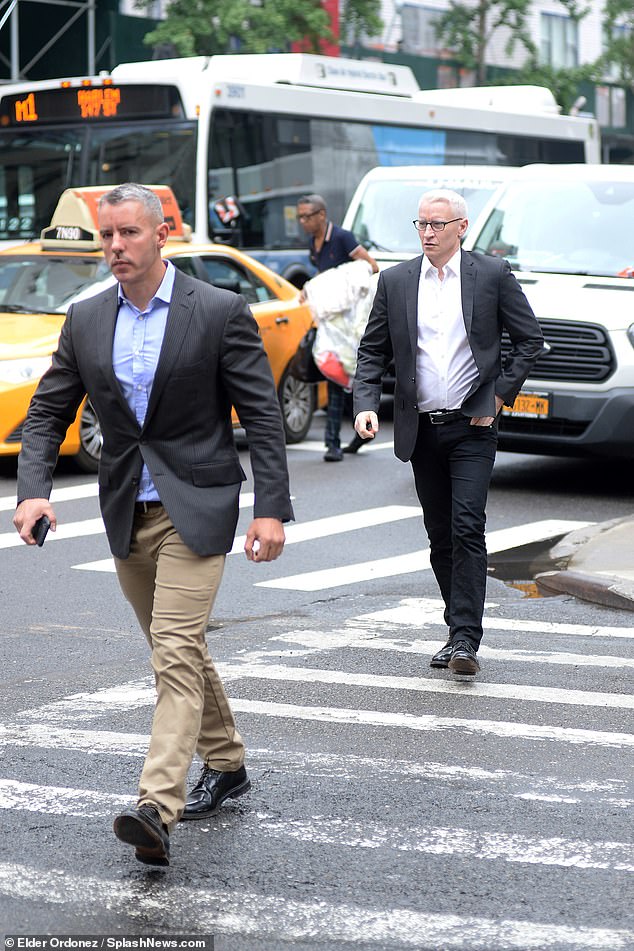 Reunited: He was joined by his ex Ben Maisani (above), a little over a year after he announced they had split 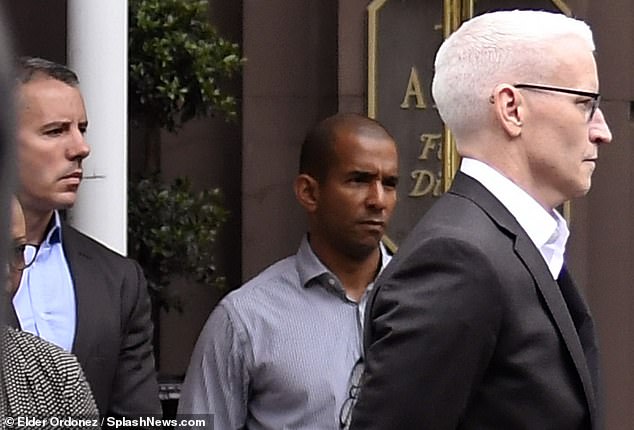 Difficult day: Vanderbilt, who passed away Monday from stomach cancer at the age of 95, was the only member of Cooper’s immediate family who was still alive (Maisani on left, Cooper on right, and Cooper’s former partner Julio Cesar Recio in middle)

Vanderbilt and her oldest son Stan, 68, had a close relationship but that was not the case with Christopher, 67, who had been estranged from his mother for over four decades.

In addition to her three sons, Vanderbilt is survived by at least two granddaughters, a grandson and two great-grandchildren. 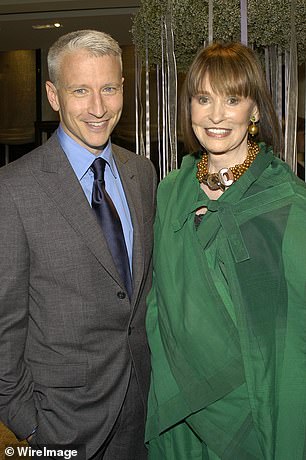 Devastating loss: Vanderbilt is survived by at least two granddaughters, a grandson and two great-grandchildren

Vanderbilt’s youngest son, 52-year-old Cooper, did begin speaking with his brother two years ago after he and their mother published their memoir The Rainbow Comes and Goes: A Mother and Son on Life, Love, and Loss.

That book focused a good deal on the Vanderbilt’s other son, Cooper’s brother Carter, who took his life at the age of 23 in 1988 by jumping off the balcony of the family’s Manhattan apartment building.

Vanderbilt, who passed away on Monday at the age of 95, also appeared with Cooper in the HBO documentary Nothing Left Unsaid that same year.

Cooper paid tribute to his mother in a pair of poignant social media posts on Tuesday, first on his own account and then later on his mother’s Instagram page.

‘In her final week my mom liked me to play a video of Peggy Lee on YouTube singing, “Is That All Their Is?” We’d hold hands and sing the chorus, pretending we were dancing,’ wrote Cooper.

He continued: ‘My mom would giggle while singing, “it’s so Marvelous…” she’d say, with a sound of delight, and mischief, knowing that she was on the cusp of discovering if that really is all there is.’

Vanderbilt will be buried alongside her fourth husband Wyatt, who passed away in 1978, and her son Carter at the Vanderbilt family’s plot in Staten Island.

She and Cooper were seen visiting the burial plot in their HBO documentary, in which Vanderbilt spoke far more about her late son than Cooper. 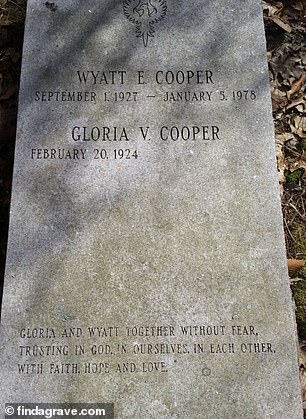 ‘I love to talk about him. It brings him alive, it brings him close. It helps me sort of share how I felt about him, feel about him,'[ she said back in 2017 while appearing on CBS Sunday Morning.

Cooper said that he had a different reaction to it all, and struggled to deal with the loss of his brother and father.

‘For me, it certainly changed who I was,’ he explained in that same interview.

‘I think the person I was before was a lot more interesting and outgoing. I became probably much more introverted, and very concerned about what catastrophe was going to happen next.

‘And it made me much more of an adult.’

Vanderbilt paid tribute to her son back in 2018 on Instagram.

‘Thirty years ago today, before my eyes, I lost Carter Cooper. My son. My life. My hope,’ wrote Vanderbilt.

‘In the years since, his brother, my beloved Anderson, has been by my side, giving me love and strength. Carter is close and alive within me, as he was from the beginning, and as he always will be.’ 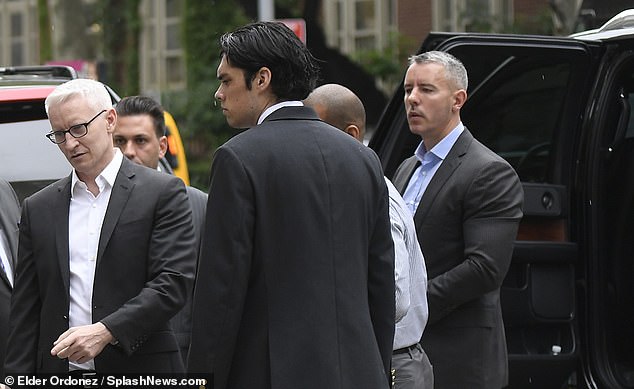 Support system: Maisani and Recio (above) stayed by Cooper’s side as he prepared to bury his mother 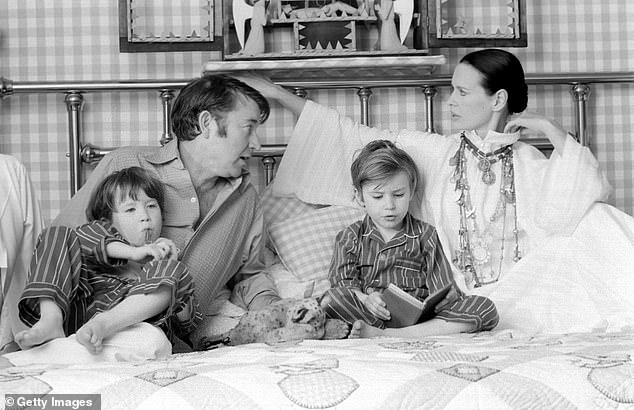 Family: She will be buried alongside her fourth husband Wyatt and son Carter at the Vanderbilt’s family plot in their hometown of Staten Island (the Coopers in 1972)

In an excerpt from their memoir, Cooper writes that he and his team were heading off on assignment back in 2015 when he called his mother right before he departed to let her know he would be away and working overseas.

‘When she picked up the phone, immediately I knew something was wrong. Her breath was short, and she could barely speak,’ writes Cooper. 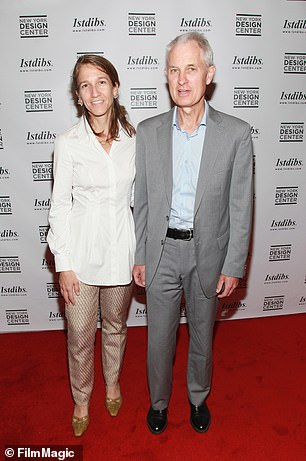 Son: Vanderbilt’s oldest son Stan (above with wife Emily in 2012) was not seen with Cooper on Tuesday

Vanderbilt was sick for the next few months, battling a respiratory infection, and told Cooper at one point; ‘I’d like to have several more years left. There are still things I’d like to create, and I’m very curious to see how it all turns out. What’s going to happen next?’

Shortly after they started work on the memoir, which is a series of email exchanges between the two over the course of a year.

‘I didn’t want there to be anything left unsaid between my mother and me, so on her ninety-first birthday I decided to start a new kind of conversation with her, a conversation about her life,’ writes Cooper.

‘Not the mundane details, but the things that really matter, her experiences that I didn’t know about or fully understand.’

He also spoke about the connection he had with his mother.

‘We have never had what would be described as a conventional relationship. My mom wasn’t the kind of parent you would go to for practical advice about school or work.

‘What she does know about are hard-earned truths, the kind of things you discover only by living an epic life filled with love and loss, tragedies and triumphs, big dreams and deep heartaches.’ 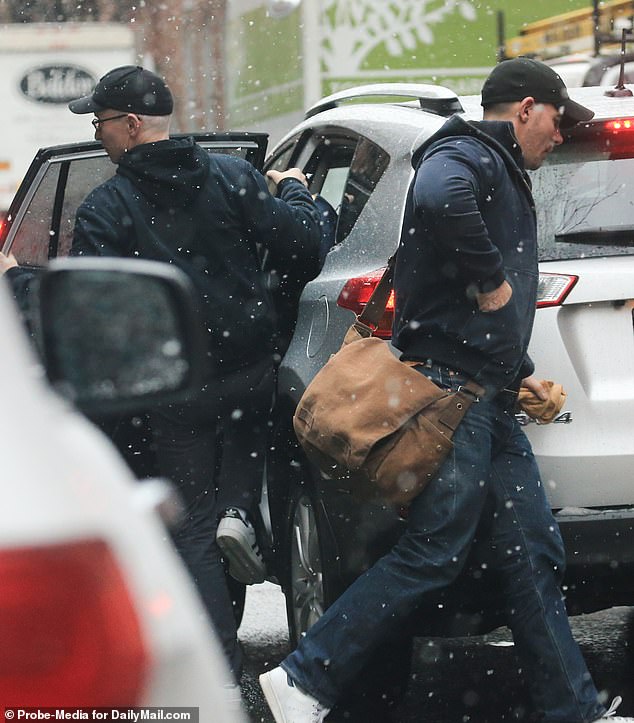 Parting ways: Cooper and Maisani were seen leaving the Greenwich Village firehouse where the CNN host lives back in March 2018 just hours before they announced their split 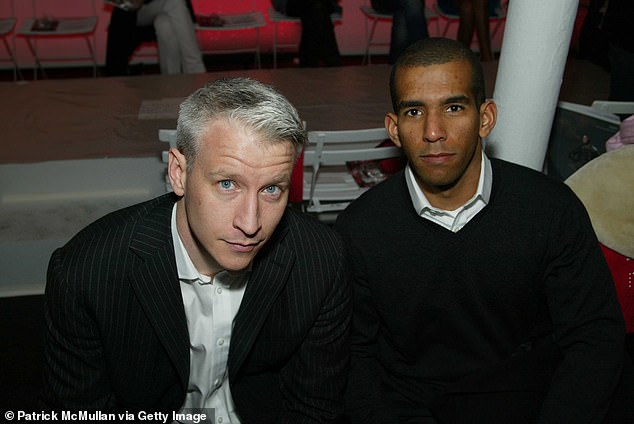 In he beginning: Cooper and Recio in 2004 at Diane Von Furstenberg’s fashion show in NYC (above)

When asked about her mortality in that 2017 CBS interview, Vanderbilt said she was ‘not necessarily’ reaching the end of her life, adding; ‘Well, I think something wonderful is going to happen – maybe tomorrow? And I like to think maybe sooner!’

Cooper then noted; ‘Yeah, my mom is the most sort of youthful and optimistic person I know. She still believes there’s like a guy waiting on a boat in the south of France.’

Vanderbilt cut him off to say a yacht instead of a boat, to which Cooper then said; ‘A yacht! For her, or just around the corner there’s gonna be some incredible new experience, and she makes me believe it as well.’

Cooper also said that going through some of his mom’s belongings, from photos to love letters, that she had held on to through the years made him want to work on the memoir and documentary.

When asked why she decided to keep these things, Vanderbilt said; ‘I believe everybody should, because it gives you a frame of reference. And it gives me a sense of knowing who I was then, who I became, who I am now.

‘It gives one a sense of time, and a sense of one’s own history, so to speak.