Andrea Constand has spoken out publicly for the first time about the night that Bill Cosby assaulted her.

Constand, who gave her first television interview on the Today Show, said she felt like a ‘limp noodle’ after Cosby handed her three blue pills to help her relax.

‘He had three blue pills in his hand and he put his hand out,’ she recalled. ‘I said “What are those?” He said, “They’ll help you relax”‘.

When Constand asked him if they were natural or herbal, he simply assured her that the pills were ‘your friends’. 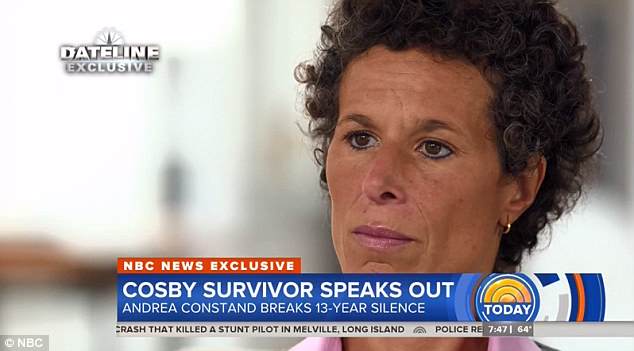 Constand, who gave her first television interview on the Today Show, said she felt like a ‘limp noodle’ after Cosby handed her three blue pills to help her relax

‘I took them because I trusted that they would make me feel a little more relaxed,’ she said.

‘You trusted him?’ NBC news reporter Kate Snow asked her.

Within a half hour, Constand started slurring her words and could no longer walk. Cosby helped her to a couch and began to assault her.

‘My mind is saying, “Move your hands, kick, I don’t want this, why is this person doing this?”‘, she recalled.

Constand recalled that Cosby said ‘nothing’ during the assault. And she wasn’t able to speak. 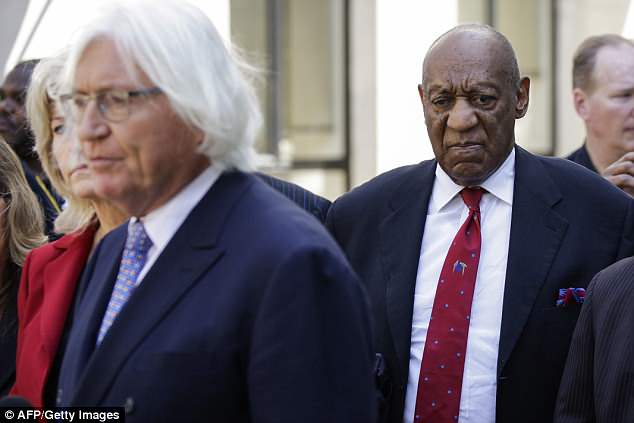 Within a half hour, Constand started slurring her words and could no longer walk. Cosby (pictured here after being found guilty of sexual assault) helped her to a couch 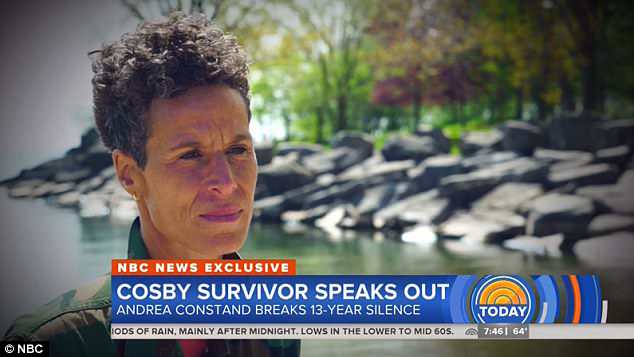 Constand recalled that Cosby said ‘nothing’ during the assault. And she wasn’t able to speak

‘I was in and out of consciousness,’ she said. ‘I was crying out inside, in my throat, in my mind, for this to stop. I couldn’t do anything.’

Constand woke up hours later and knew what had happened. That morning Cosby brought her tea and a muffin for breakfast.

She then went home where she cried in the show before going to work.

Constant feared that no one would believe her story – that America’s Favorite Dad was secretly a monster. It was a year before she told her mother.

But thirteen years later, the world would know what Cosby had done to her.

Constand will also be interviewed by Kate Snow in a Dateline special airing on Friday, where she will be joined by her mother and the other accusers who testified during the disgraced actor’s recent retrial.

‘For the verdict she told she had come to peace with this and was sitting in the courtroom thinking, whatever way this goes I am going to be OK with it,’ explained Snow while previewing the special on Today. 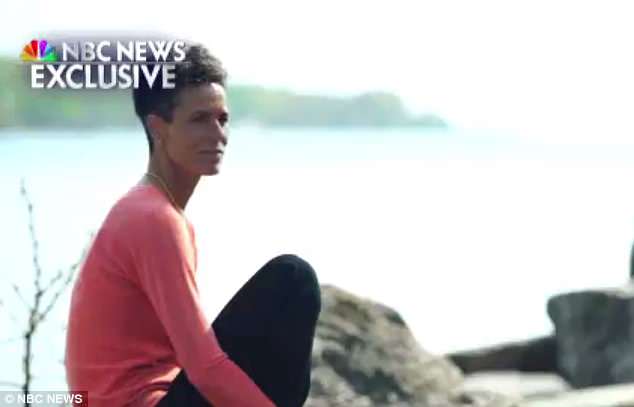 Speaking out: Andrea Constand will be interviewed by Kate Snow in a special episode of Dateline set to air on Friday night 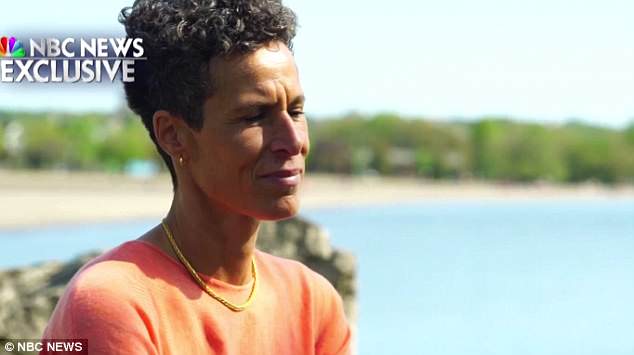 Snow appeared on Today to preview the special, and said Constand felt ‘redemption’ after the verdict but had been prepared for both outcomes

Those four women, along with Janice Dickinson, testified at the trial last month after the court ruled that five accusers could give testimony in the case.

They consider Constand a ‘hero,’ as do the over 50 women who also publicly accused the once-beloved Hollywood star.

Constand’s mother Gianna will also be interviewed, having been a key part of the case from the beginning when she herself spoke to Cosby after the 2004 assault.

‘I honestly didn’t know what to expect when we met in New York after the verdict. I knew Andrea was into wellness and holistic medicine. She works as a massage therapist in Toronto,’ said Snow in a reporter’s notebook piece about her interview.

‘When I watched her testify, Andrea was calm and centered. I saw her close her eyes at moments and take deep cleansing breaths. I wondered whether she would be quiet and subdued in our interview. As it turned out, she was thoughtful, frank, resolute and unflinching.’

Snow goes on to say that Constand told her ‘she has found peace.’

The interview also delves into Constand’s decision to help prosecute Cosby 12 years after the incident.

‘I asked Andrea whether it was difficult to decide to cooperate, to testify. She told me that she didn’t do it just for herself,’ said Snow.

‘She said she did it because so many women had come out in public and accused Cosby at that point. She told me she believed all those women and felt she needed to be their voice.’

Earlier this month, Judge Steven T. O’Neill ordered Cosby to return to the Montgomery County Courthouse in Pennsylvania on September 24 for the sentencing hearing in his criminal case.

The court order also informed Cosby and his defense team that two days had been set aside for the hearing, which suggests that Judge O’Neill might allow some of the 62 women who have publicly accused Cosby of sexual assault to come forward and speak.

Constand is expected to deliver her victim impact statement at that time.

Cosby is facing 30 years in prison after he was found guilty on three counts of aggravated incident assault.

He has been under house arrest at his estate in nearby Elkins Park ever since a jury found him guilty of drugging and molesting Constand in 2004, while she was an employee at Temple University.

He has also been outfitted with an electronic monitoring bracleet and may only leave his home to visit his lawyer or doctor.

Ahead of his sentencing, Cosby will also undergo a Sexually Violent Predator Test, the results of which will be examined by the Sexual Offenders Assessment Board, who will pass along their recommendations to the court.

In addition to Constand, it is likely that the five other women who testified at Cosby’s trial will be able to deliver victim impact statements at the sentencing hearing in September.

Baker-Kinney, Dickinson, Lasha, Lublin and Thomas all testified on behalf of the prosecution, who had hoped to have 13 witnesses take the stand during Cosby’s retrial. 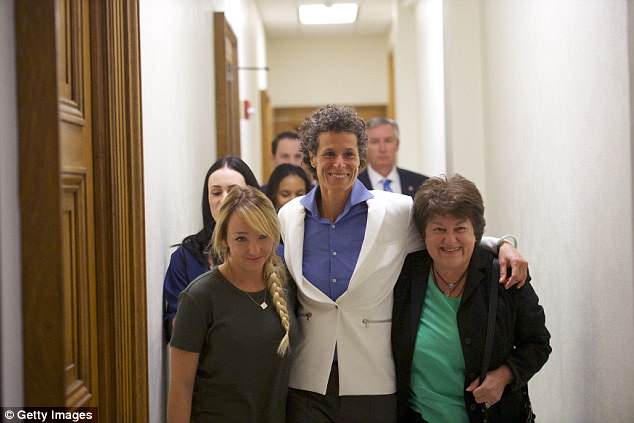 Constand testified in court that Cosby gave her wine and pills and then sexually assaulted her while she was unconscious.

‘I got scared,’ Constand told police of the alleged assault. ‘I had no strength in my legs. They felt rubbery and like jelly. I felt spacey. Everything was blurry or dizzy. I had no thought to call 911.’

She later told police: ‘I told him, “I can’t even talk, Mr Cosby.” I started to panic.’

Constand claims she arrived at Cosby’s home on the night in question and was greeted by the actor, who was wearing a sweatsuit.

The two spoke about Constand’s future, and she told Cosby she was feeling ‘drained’ and ’emotionally occupied’.

That is when Cosby allegedly went upstairs and returned with three blue pills, telling Constand: ‘These will make you feel good. The blue things will take the edge off.’

Constand claims she then asked if the pills were herbal, to which Cosby replied: ‘Yes. Down them. Put ’em down. Put them in your mouth.’

According to the affidavit of probable cause, Cosby then told Constand to have some wine, and soon after she began to have trouble speaking and seeing.

Cosby then allegedly told her to lie down on the couch, and soon after, according to the affidavit of probable hearing, was ‘fondling her breasts, put his hands into her pants, and penetrated her vagina with his fingers’.

He also allegedly took her hand and placed it on his erect penis.

Constand claims she woke up hours later around 4am and realized her bra was undone and above her breasts and that her sweater was bunched up.

As she made her way to the door she claims Cosby was standing there in a robe and holding a muffin, which he handed to her as she left while saying: ‘Alright.’

Constand, the former director of operations for Temple’s women’s basketball team and a one-time college basketball star herself, launched a legal suit against Cosby, a man she called her ‘mentor’, in March 2005.

She said she first met Cosby, a Temple alum, in November 2002 and the pair became friends. She was a frequent guest at dinner parties at his home.

The case against him emerged just days before Pennsylvania’s 12-year statute of limitation deadline for pressing charges was about to run out and despite a previous DA declining to charge Cosby a decade ago.

Cosby previously said under oath that he had consensual sexual contact with Constand.